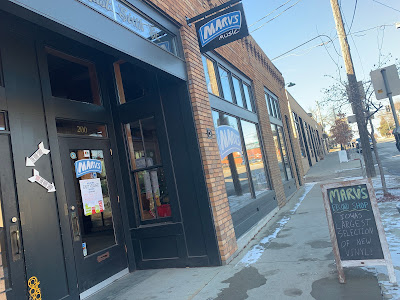 This is my 4th trip through Iowa in the past 6 months or so, and my second time in Des Moines.  This time I was here for 3 nights and had some downtime.  I checked and while I had perused vinyl in Iowa before, it was a long time ago and not very thorough.  So I knew I'd make time to find something else on this trip.  I started with Marv's.

Marv's unfortunately had about 95% of their inventory as new, sealed vinyl.  Not my bag at all, largely because I don't like that many contemporary artists and I don't want to pay $15-20 for every record.  They did have a small amount of used stuff, but much of it was valuable and priced accordingly.  One of the guys in there gave me a flyer for another shop called 'Vinyl Cup Records' not far away and recommended them, but unfortunately they are only open in the evening so I knew I wouldn't be going. 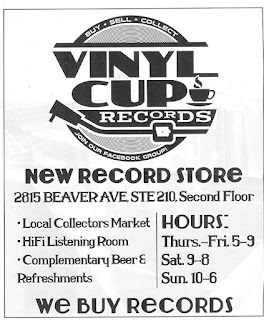 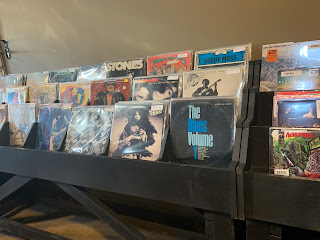 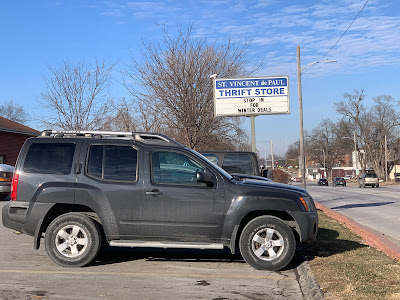 I ran across a St. V's and swerved to check it out.  Looks like it's been over a year since I checked one out, and that was in Idaho! This is also the 30th time I've documented a visit, I'd guess at least 20 of those posts were for unique locations so nice to hit a good even number.  Not quite as nice to have junk records, but they were all in such good shape that I could just read the spines really quickly and disqualify them as anything I'd be bringing home. 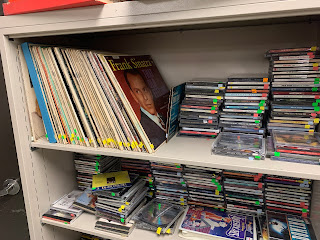 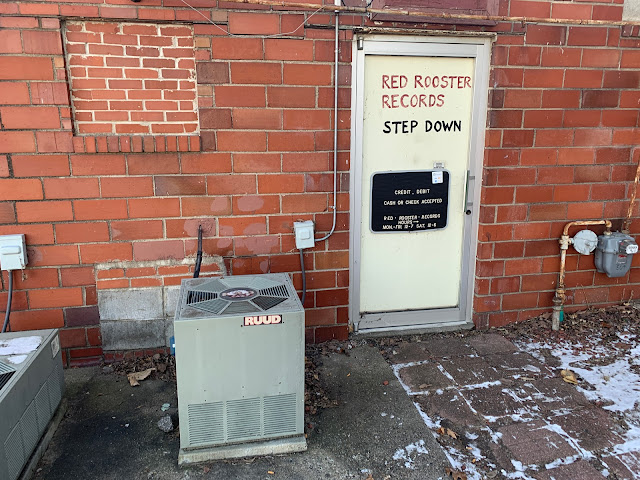 I had great disappointment that I wasted time going to Marv's when Red Rooster was not only closer but clearly was going to be a proper record store where I would actually have something to dig.  I called a little after noon and got no answer, I called again a bit later to make sure they were open and indeed they were.  So I ran out to get a bite to eat and then headed over.  Parking in the area is slim, you can't park on Euclid but I spied a sign showing there was parking out back.  It was a little tight in a big truck but I made it work.  Conveniently there is even a back door so you don't have to walk around front. 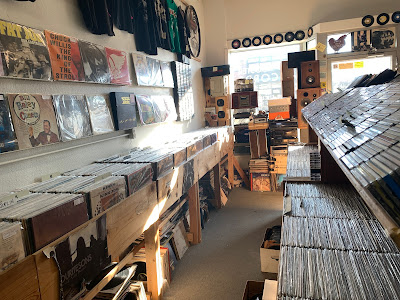 The shop keeper was busy going through some vinyl when I walked in, but no other customers were currently in the shop.  I instinctively said 'hey how are you' or something casual of that nature.  He said 'good' but nothing else.  That felt a little terse but I tried to brush it off.  Unfortunately it got worse from there.

I wandered around for a bit as I always do, getting the lay of the land but could not locate the jazz section (if there was one).  He asked what I was looking for and I said 'jazz'.  He replied that he would have to clear that section off, apparently it is sufficiently unpopular so as to cover it with stacks of other random records and even some shopping bags and other stuff.  An awkward moment transpired when I had to ask him to repeat himself as I genuinely did not understand what he said.  I felt like he seemed put out that he had to do this and again my spidey sense was screaming but I brushed it off and thought maybe I'm misunderstanding things.  Turns out if you get this feeling twice in a few minutes, it is probably genuine.  I looked through the new releases in the meantime but didn't find anything.

Once the jazz records were open, I got up in there.  It is a tight area and the bins were pretty packed, so it was hard to see what I was looking at without bending the jackets to peer down inside.  Luckily, every record is labeled in the upper right hand corner with the artist name and some other notes.  The bins in the back were very hard to see even with the labels, as they were so recessed and so packed with records.

But before long, I found a handful of good vinyl.  I have all the Pat Metheny group albums (plus some on CD and tape) but the only solo album I have is his debut.  Lately I had been streaming New Chautauqua and thought of all the times I came across a copy and let it go.  I was hoping I'd find one and promised myself I'd scoop if it I did.  My wish was granted and for only $6!  Next I found a 5000 series release by Lalo Schifrin I didn't know existed.  It was a few bucks more than I wanted to pay but I was going to grab it anyway.  That was until a few moments later (Apparently the 'S' bin was a lucky one for me) that I found the Shadowfax album just after the one I already own and love.  This was half the price of the Lalo album, so I did a catch and release on that. 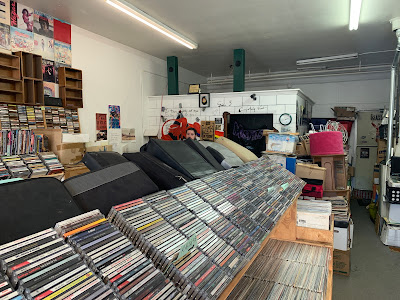 At this point I was really satisfied that I came out of there with two good records and prices I definitely liked.  And I had yet to look at the tapes and CDs!  I quickly found a great Jeff Beck album on tape (mint condition, looks like) for $2 and I can't wait to put it on when I get home.  Shortly after that I specifically went on a hunt for PMB CDs (strictly for my truck) and was delighted to find one.  What a score!  But here is where things between me and the gentleman in the store really reached a head.

When I was looking at the tapes I saw a nice stash of 80s and 90s metal bootlegs.  There were a bunch of Slayer live recordings, some of them from the mid 80s.  I must admit, I was almost enticed to grab one.  In an effort to patch things up with this guy who I did not know, but who clearly didn't seem to like me, I said aloud "You've got a nice selection of metal bootlegs over here".

No response.  For the third time, I gave him the benefit of the doubt and thought 'he didn't hear me', though not speaking loud enough isn't something I've ever dealt with in my life.  At this point I was satisfied with my pile of music so I went up to the cluttered counter to check out.  After considering it for a moment, I decided to repeat myself.  Bear in mind, at this point we are about 18" apart.  He actually kind of shrugged his shoulders and said 'So?'.  I didn't even know what to make of this.  I replied 'I didn't mean it in a critical way, just trying to make conversation'.  There was yet another awkward silence so I added 'Did I rub you the wrong way or something?' and he just said 'not at all'.

At that point I considered just walking out.  I can get the records elsewhere, don't really need them and it would please me NOT to give money to a person who clearly is independently wealthy (or more likely, prideful) enough to shoo customers out of his tiny store with a bad attitude.  Not only was this probably the most awkward situation I've ever had in a record store, but also maybe the most awkward situation in any retail scenario, ever.  This blog is filled with numerous stories or having great discussions about music and life in record stores, so I don't know what this person's problem is. Was he sensitive to the fact that he was selling media of a questionable legality? That was NOT my point. Not a bad place, but not worth that kind of response. 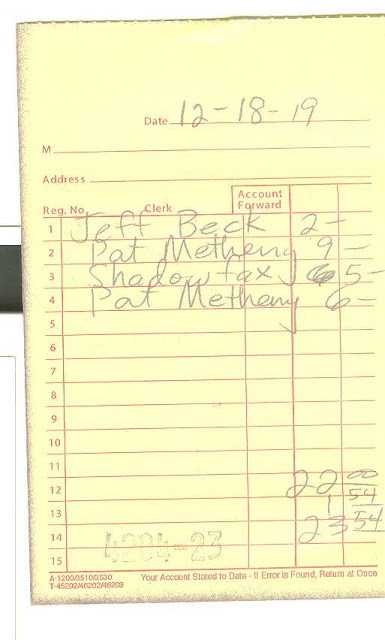 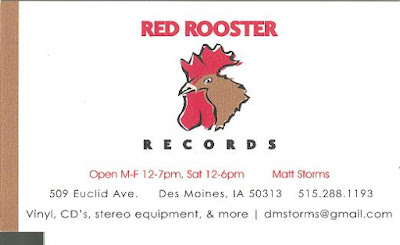 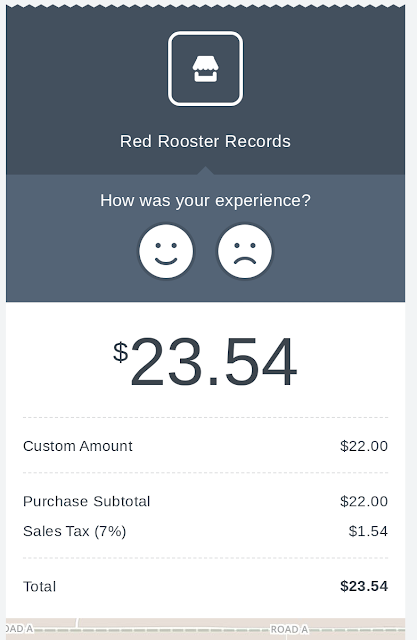