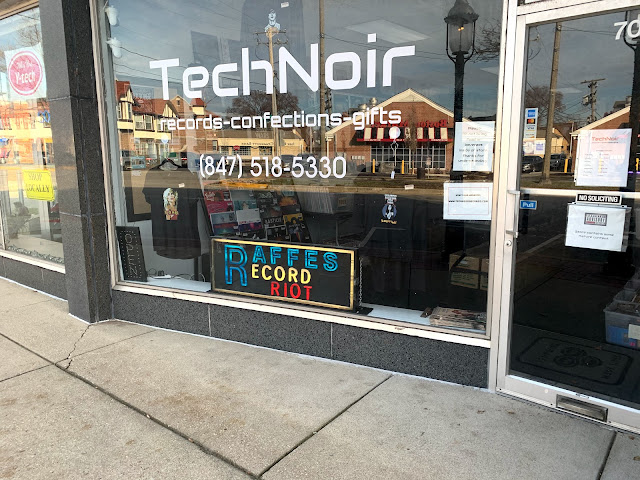 Upon discovering the unfortunate demise of Raffe's, I simultaneous discovered the birth of Technoir.  As you can see in the store front above, it truly is the spiritual successor.

It was a quick dual bus jaunt to take myself from my door step to Technoir's which was nice on a bit of a blustery day.  I could tell from the outside that this place was well put together.  The inside followed suit, perhaps even upped the ante. 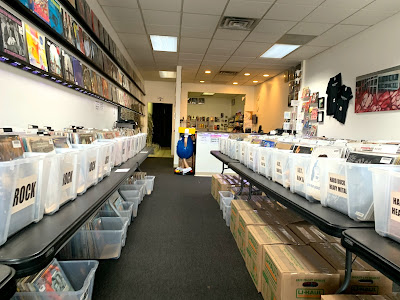 Extremely tidy, clean around every corner, this place is clearly curated carefully.  Brand new bins, simple but effective tables and nice well decor all around.  Again, more Raffe's memorabilia hangs on the west wall which is a very nice touch. 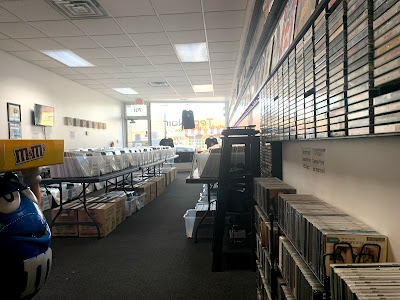 I tore through the jazz section, A to Z.  Everything is bagged, a small sampling of new vinyl was mixed in but mostly old stock (which I prefer).  Next I glanced at the 'new arrivals' bins, three of them nearest the counter.  I was the only customer and it was quite peaceful and the clerk (owner) was spinning an interesting array of genres.  I found three possibilities swiftly in these bins.  I let a Walter Wanderley release go, which I regret pretty shortly after and still do now.  That was dumb.  I grabbed a Shadowfax promo 12" single which I still have not listened to.  I hope I enjoy it but I worry I will not as I see now that it is truly a different era from the one I know best.  I found Lani Hall's 8th - I swore a while ago to a moratorium on her discography as I have the first four already.  For sentimental reasons (her's and my own), it was hard to leave this one behind as it recalls the Chicago neighborhood she hails from in it's title.  In my warped brain I thought I ought to save $3 by getting the Shadowfax over the WW album, but it isn't much savings at all when you consider it is a single vs an LP.  But these are the bizarre rationalizations that record collectors, drug addicts and other obsessives make about their sinful trades.

I've actually been listening to tapes lately, as if I need another type of media to collect.  But before I could explore that I started thinking about how much I've been listening to this Squeeze tape and I wondered if they had it in vinyl.  They did - no brainer, could not resist.  It was only $3.99, probably because it has some water damage to the jacket, but somehow the inner sleeve (original) and vinyl look clean. Next I did indeed dig the wall of cassettes and scooped a Judas Priest album (which I must say has amazing fidelity for it's age, already ran through side B). 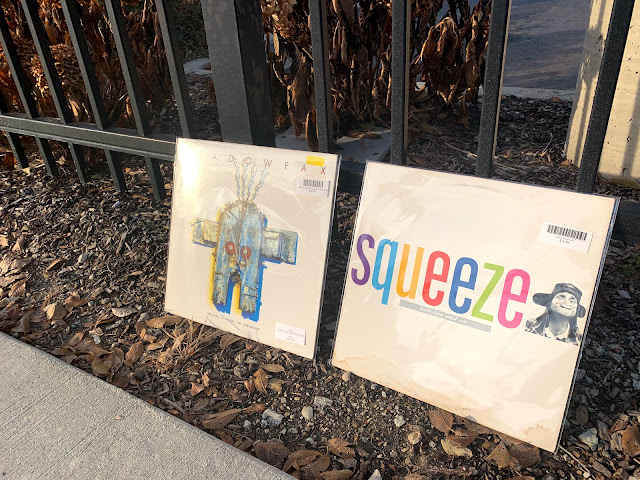 Definitely was impressed by this shop and glad to know I can get there easily via Pace.  I shall return!