At some point I think this blog will just become a time capsule as every single place I have ever visited and documented will be gone.  I heard about one of the below closings earlier this week and got to thinking I ought to sit down and see what other shops I once enjoyed (or at least visited) are no more.

I've had only a few experiences like the one I had at Funk Trunk, the kind where you are one on one with the clerk or even the owner (as in this case).  And you can actually chat in a relaxed way, and peruse the vinyl and hopefully come up with something.  I had a great night in Rogers Park, had an awesome meal and got fairly drunk.  Not enough stores like Funk Trunk out there and they all seemed destined not to survive....too pure, too real.

This one hurts.  Some of the early days of this blog were based around my visits to Logan Hardware.  Simple but very important records in my collection were copped there and many an arcade game were played in the back room.  I remember just feeling like I owned the place, it was never that crowded on a cold Sunday afternoon, and it was easy to get to via public transportation.  I'm just glad I'm not sitting here saying 'I wish I had gone more'.  I took advantage, thank god.  I was in Logan Square this week and I wanted to get a drink but it was pretty early.  I thought that Logan Hardware would be a great way to kill sometime but found out they were gone.  Ended up sitting in the library which was fun in it's own way, but today I mourn the passing of a great one. 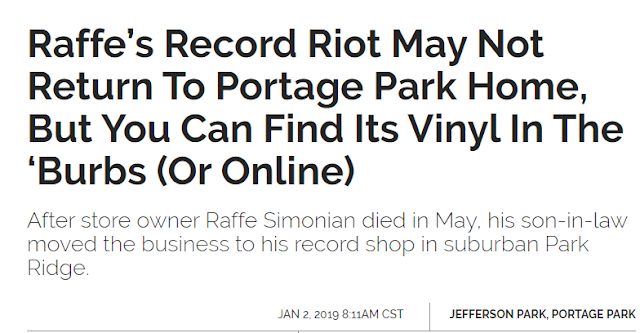 Another one that was fairly easy to get to, a fun bike ride through Portage Park on a warm weekend.  Distinctly remember going there on Record Store Day one year and definitely pulled some important vinyl out of there.  This post was inspired by finding out about the closing of Logan Hardware just a couple days ago, but this place as well.  I woke up, still in bed on this fine Saturday morning and thought maybe I'd have another ride out there.  Again, stymied by time, now lost, and you just can never get it back.  The article you see about outlined the new store in Park Ridge which is interesting because when I went to Google Maps (why? Because part of me knew it had been a while and I expected the worst, apparently rightfully so) the new shop TechNoir kept coming up which I didn't understand.  I am still considering biking over there today or maybe taking the bus.  At any rate, Raffe's was grimy in the best way possible and I played and went to a few shows at Memories next door (which has changed names many times).

The most recent of all.  Can't say I will miss Val's...I went once long ago and never had any inkling to return.  Yeah, Val was there and yeah, she was rude.  If someone thought that stuff was cute or ironic they are a better man than me.  I paid way too much for what I bought that day but it was so long ago I didn't know better.  Oak Park Records is still kicking and certainly I'd recommend them if you are in the area, even if Val's was still open. 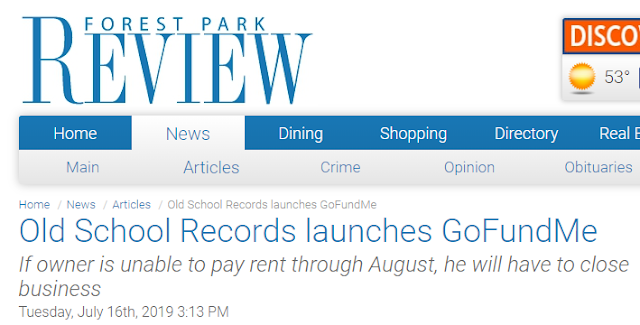 Very recent news here.  It does look like Old School survived but I had no idea they moved.  Interestingly, I went down to Madison St right around the date above because I went to the Army Surplus across the street.  I didn't notice or think about Old School, but I don't know why I didn't.  Glad to see (I think/hope) they are doing OK because I had a good visit there and remember it well.

Email ThisBlogThis!Share to TwitterShare to FacebookShare to Pinterest
Labels: RIP