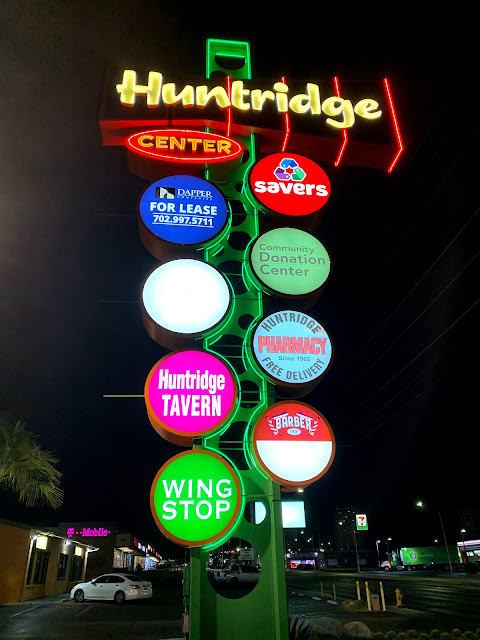 I was perfectly happy to check Nevada off my list with my visit to Record City.  But that night I wanted to have a few drinks and selected the Huntridge Tavern at my watering hole.  After a couple fairly wild bus rides I found my way and what do you know - there was a Savers in the same strip mall! It was a half hour before close so I'd be remiss not to stop inside and see what they had to offer.

They didn't have much in the way of LPs but they had a ton of 7", tons of picture sleeves.  Too many to go through so I just took a glance. 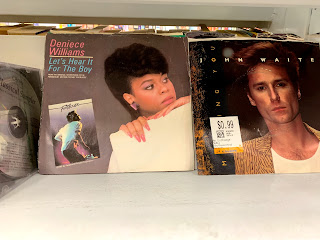 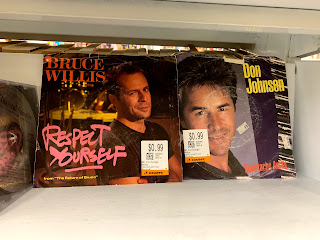 File these under 'actors pretending to be singers'. 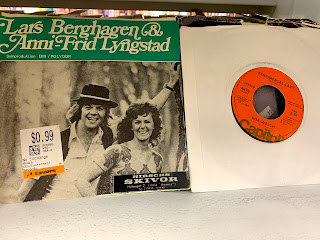 The one on the right (Bob Welch) I considered buying because I've always loved the song, but I didn't want to sit with it at the bar (which was dumb).  The second one I thought was interesting as it is clearly foreign - the kicker is that someone recently paid $80 for this!  Just the fact that this has been sold 8 times says a lot.  Looks like Anna-Frid Lyngstad is one of the four members of ABBA and everyone knows they have a devoted following.

So the next night - my last night in town - I rushed back again to grab it.  I already knew at that point I'd grab some others as well.

I could see immediately that someone had been meddling in the past 24 hours! My heart raced because I could not find this damn 7"! So I took a deep breath and figured I'd just go through every single in the bins because who knows what else I might find.  There must have been at least 150 of them, it was interesting because I even found a few doubles (or triples!).  So it must have been someone's collection.  It took a while but I did the deed and did eventually find what I was looking for - and then some! 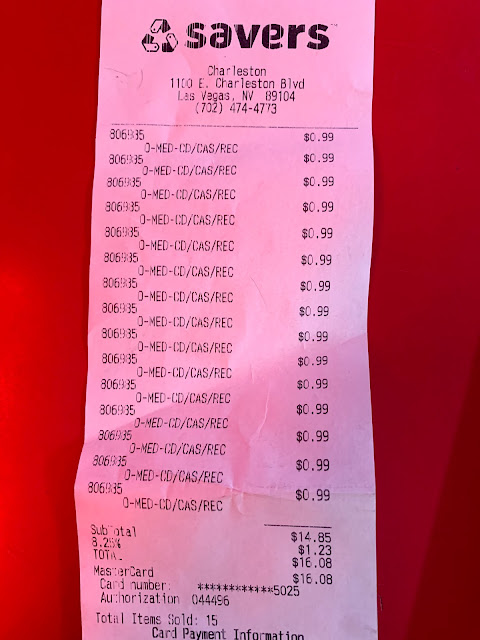 Believe it or not I actually had even a few more than this but I did a catch and release on a handful.  Here is the breakdown:

Deniece Williams - Let's Hear It For The Boy

Couldn't pass on the picture sleeve.  I am a fan of Niecy, grabbed an LP a couple years ago in Grand Rapids.

The Sanford/Townsend Band* - Smoke From A Distant Fire / Lou

Classic track.  I put a quick video on Vimeo a few years ago in tribute.

One of my favorite songs ever.  RIP Bob.  This will go well with the Mexican import I snagged in Kentucky a ways back.

I have the original (or at least earlier) issue of this single which I found in a Goodwill in Orlando, and the LP which I got in Canada.

Funny because I only know this song from Kai's cover on the same Canadian LP I just referenced.  I knew this was the original and it was too odd to find both of these singles together not to grab them both.

Came across a bunch of Stevie singles and kept hoping I'd find this one.  Then the song came on the radio in Savers.  A little while later, I found this.  Sounds unbelievable, but it is true, I promise.

Grabbed this strictly for the instrumental B-side.  What purpose was that supposed to serve?

Steve Winwood - While You See A Chance

What a classic track.  Reminds me of childhood.  Wish I found the picture sleeve, but alas I did not.

What a classic, looks like this is the original issue from 1959.

See my comments regarding the Don Johnson single above.  Fun fact: when this came out in grade school the video was on all the time.  Also my dad was a big fan of Moonlighting.  I always thought Bruce Willis smirk was cool (still do) and I used to try and imitate it when I was a kid.

Pretty played out song, but again, could not leave the picture sleeve behind.

Steve Winwood - Roll With It

What an atrocious piece of garbage.  Can't believe it is the promo.  The cover makes me want to vomit.  What does a dirty shirt and little sunglasses have to do with hip hop?

And of course Lars Berghagen & Anni-Frid Lyngstad - En Kväll Om Sommarn / Vi Vet Allt, Men Nästan Inget .  I just listed this for $40 OBO  I was able to peel the Savers sticker off no problem which I was worried about.  There is another sticker, so old and dry its ready to fall off.  It says 'Hirsch's Skivor' which means 'Hirsch's Records' and is/was a record store in Denmark.  This didn't come out until 1971 but the store had been around a while, here is a photo I found from the 1960s.  Wish my time machine had some fuel! 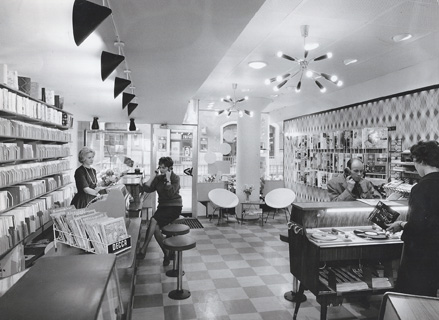 Email ThisBlogThis!Share to TwitterShare to FacebookShare to Pinterest
Labels: nevada, out of state, savers, thrift store