A record player for my office!

I have been with my current employer for almost 14 years.  About a year ago, I was lucky enough to move into an office of my own.  It is probably 12' x 12', very roomy by my standards.  When I got it, I did a ton of work: drywall, electrical, paint, carpet cleaning.  Did some work to the desk/credenza, made some modifications there.  Moved some other furniture in/out.  Got some cool diffusers for the florescent light fixtures.  I hooked up some LED lights around the perimeter of the room which required additional modifications, more parts, more electrical work.  I got stainless steel wall plates for the outlets, network jacks.  Got a USB outlet near my desk and an automatic light.  It was a long time coming.  Very, very proud of it all.

But early on, I am some ambitions.  I decided that if you have an office of your own, and you can MAKE it your own (as I have), there are three things that take you to the top of the list:

Well the couch was first.  I went down to my local St. Vincent store where I have bought vinyl many times.  I had some measurements in mind but that was about it.  I knew I didn't want anything ratty or nasty looking.  Funny because I have been in many, many thrift stores but I don't look at couches, or furniture generally.  I was surprised to see that the couches at St. Vincent looked really nice for the most part! I ended up picking a green couch which seriously looks brand new.  I paid under $30 with tax because I was there on a sale day.  It is absolutely perfect and I love it.  I have taken a few naps after I punched out for the day on particularly stressful afternoons.

The fridge was next.  My dad long had one in his office.  His company moved and in the new building they don't allow any food or drinks outside the cafeteria so the fridge sat in his basement.  He offered it to me but early on I wasn't interested.  Why would I be? There was another small fridge in the shop just outside my door, so close to my old desk where I stored my lunch for years.  There is even another full size fridge in the office! Well one day the snobbishness kicked in and I decided that I could not possibly bear to let my food and drinks touch others.  So I did grab the fridge.  I shortened the cord and put a right angle plug on the end (I love these things) so I could push it really close to the wall.  I keep it filled to the brim with my favorite drinks which is pretty awesome.  I just dropped $40 at Whole Foods this weekend to refill it with La Croix, Steez and iced coffee.  I am a very lucky man.

Well the record player was last.  I thought it would be cool to leave some vinyl at work and listen to a few tracks now and then.  I knew I wanted something small, portable.  Maybe even with an internal speaker.  I wasn't really sure because I had never explored these kind of products though I had seen them around.  Initially I even looked at some of the old Fisher-Price record players on eBay.  They don't sound half bad! But I decided those are all so old some random part is bound to go out before long then I have to refurb the whole thing.  So I did a bunch of research on portable style players and came across a couple units that Numark makes.  I certainly like the brand due to my long time use of my TT1625s.  So I found they make the PT-01 USB and another called the PT-01 Scratch.  Apparentely you can actually scratch on the latter, which is a bit ridicolous as it is so small.I thought about buying the scratch brand new as it is under $150 but of course I am quite cheap so instead I went to ebay.  I ended up buying the USB version used for $35 (made an offer, asking price was $40).  Shipping was a ridicoolous $30.05 but even at $65.05 total, this was cheaper than anything else, and the seller said it was in great condition (the photos backed this up) and it worked great.  So he accepted my offer and I paid and started getting excited.

He first refunded $10 becasue he said the shipping was so high.  Yes it was, but I already paid - he was foolish to refund it, I wasn't about to ask.  But of course I was glad to have it.  So now I am down to an $55.05 investment.

In the meantime, I started looking at speakers.  The PT-01 USB has a small internal speaker but when I saw it actually has stereo RCA outputs, I knew I'd have to get some proper speakers.  My girlfriend has a set of Bose Companion II Series III computer speakers and man do these things sound great! So I started looking at Bose speakers and ended up on a set of Series II speakers.  The seller admitted they had some scratches etc but said they functioned great, I got them for $33.25 with shipping.  Not half bad.

So everything soon arrived and I could not wait to get it all hooked up.  Big problem: the turntable had no AC adapter! I went back to the auction page, wondering how I could be so stupid not to notice this in the description.  But it wasn't! So I sent a message to the seller, here is our full exchange:

So he ended up giving me $10 off, but I immediately had to buy an adapter, which was $9.99 plus shipping.  So here is a full accounting:

Out the door for under $100 - I can live with that. So I finally got it all hooked up and it sounds GREAT! But a few more modifications had to be made.

Power is at a premium in my office unfortunately.  I have a two-gang on one wall (this powers my fridge and the printer on top of my fridge).  I have another two-gang on another wall (this powers the surge protector that controls my PC, monitor, etc).  So I do have a free outlet on the latter.  But this doesn't help me much as it is 12" from the floor and I intended to put my new hi-fi up near the top of a bookshelf. 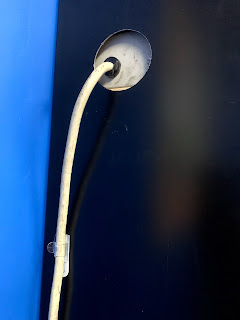 So the first thing I did was to take a hole saw and cut a 2 1/2" hole in the side of the steel shelf.  I have a variety of hole saws, I used this one because initially I was going to make a custom length extension cord with put a three way splitter on the end.  I couldn't fit the female end of the plug through the next smallest size hole saw so I had to go with the biggest one I have.  But soon after that I decided to go with a 4-way surge protector instead.  I set up that, the record player on the top shelf, and the speakers on the shelf below.  Initially I had it all up high but quickly noticed the sound was, well....up high.  And I am 6'3 but it was frustrating to have it up there, so I moved them down. 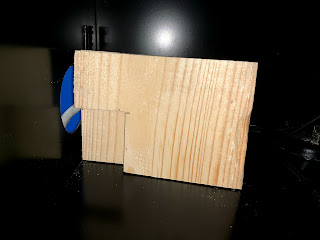 Because of the placement of my hole, I ended up building a wooden baseplate for the surge protector so it would sit flat.  I used two boards nailed together and sanded, and four screws to slide the surge protectors mounting bracket onto.  I notched out the corner of the second board to fit around the bracket that holds the shelf in place.  Works and looks great. 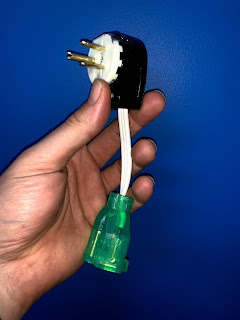 Next I had an issue with the bulky AC adapters for the speakers and surge protector interfering with each other so I grabbed a spare short cord from home.  I don't know what else to call these, but it basically is a 4" cord so your AC adapter can plug in with a standard plug.  Maybe call it a pig tail? 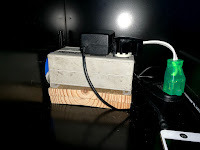 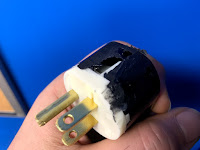 But that was no good, it was too short and the record player plug was suspended in air.  This is stressful to the cord so again I got a right angle plug and put it on.  Again - not enough, I had to put the end of it on a grinder so it wouldn't interfere with the speaker adapter. 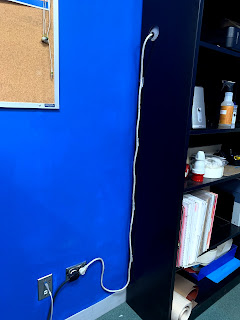 I also went out and got some command hooks so the surge protector cord is neatly put away and not out in the open - very happy with the way this looks.

Lastly I built myself a quick crate for 45s.  While the turntable can play 12" I decided it would be fun to just bring a bunch of 45s to work.  For one thing, I never listen to these at home.  Also it is good for any vinyl fan to have to get up frequetly to change the record, it makes you active in the process and it is something I haven't done in many years.

So I grabbed a board and got to work.  I drew up a very quick plan, cut the boards, sanded them and Kreg'd it all together.  I ended up using a really light color stain and I'm very happy with it. 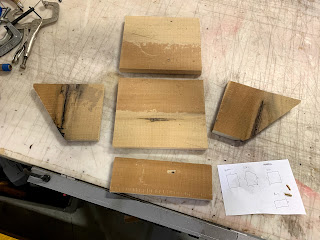 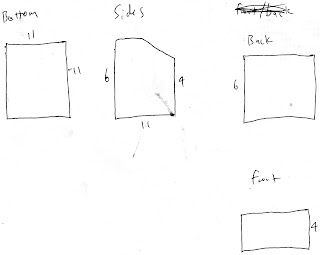 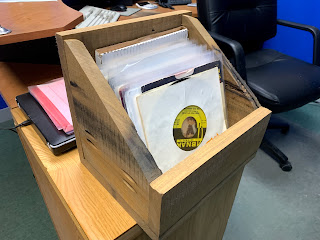 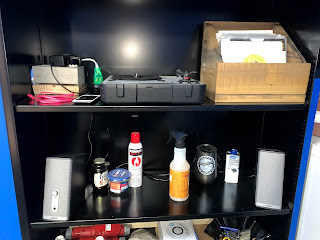 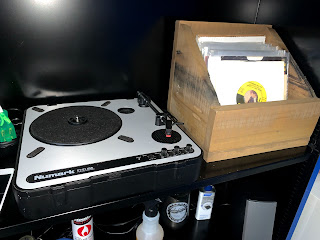