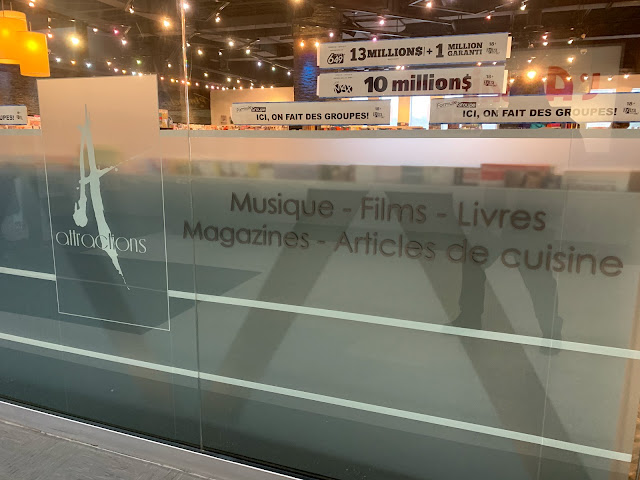 I visited Vermont about 6 months ago and got a rare chance to go back to the same place in St. Albans (by way of Burlington).  As I already had Vermont checked off the list, it wasn't on my radar to look for more to do.  I did however have a full afternoon to waste.  Surely I'd love to spend some more time in Burlington but I had a better idea - drive to Quebec!

My plan became this:


All in all this would be about 2 1/2 hours behind the wheel but I had plenty of time as my flight arrived before 1pm.  And before 1 I was on the road, soon after in Bedford where I stuffed myself with poutine and headed east.

But rewinding the clock briefly I need to explain.  Records were not originally on the menu as it looked like the region was too rural to have much to do aside from finding lunch.  The only thing that came up anywhere in the area for 'record store' on Google Maps was this place.  But there were no photos and only two reviews both of which were vague (and French).  I surely didn't want to drive way out there to find a CD store or something (which is what my hunch was leaning toward).  So I enlisted a Francophone I work with to do some investigation: 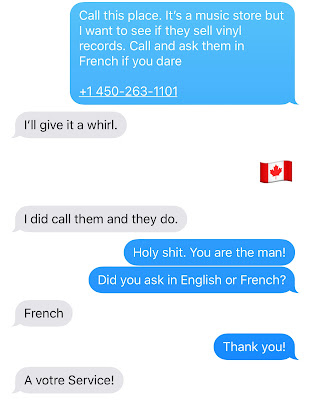 That exchange took place as I was still at O' Hare the morning of my flight.  So quickly I navigated a new route around the area and began to get really excited as my prospects. 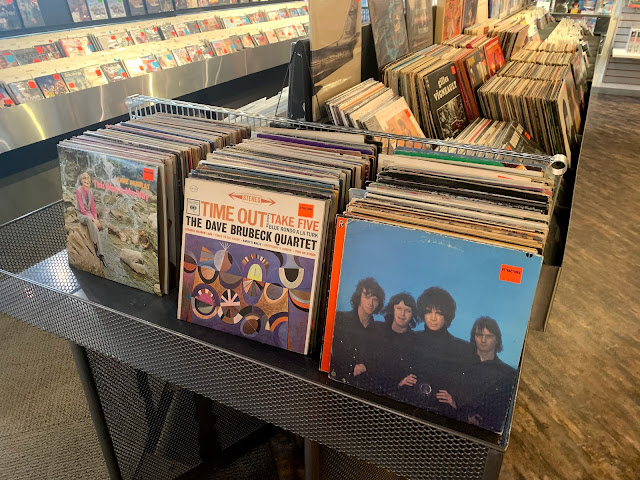 Attractions is in a small shopping mall called Domaine du Parc.  While there are less than 10 stores in the mall of course I wandered like an idiot around the place until I found it.  This is a book store up front....with a GIANT magazine rack along one wall.  Then there are tons of CDs, plenty of DVDs....and finally, vinyl.  I was worried that it would be all new reissues but I was delighted to find tons of used vinyl.  I find some real gems up front but I didn't buy any.  Why? I don't know.  And it has been eating at me and it's getting worse by the minute.  The Raspberries LP on the right was the one I missed the most (still do).  I have always loved 'Go All the Way' before I even knew the name of the band that sung it (honestly I still didn't know until fairly recently).  I found out who the artist was when I was reading an interview with Eddie Trunk and he mentioned how he loved the song when he was a kid.  There is a 'live' (lip synced) version out there of the band playing it on the Mike Douglass show and I recommend you check it out.  Eric Carmen has a wig (or is it real?) that looks like Barney Rubble's wife and is wearing what can only be called a blouse.  Most of all he actually bats his eyelashes when he sings the chorus like a woman.  You might be thinking this is criticism - it isn't.  You can't help but respect anyone who is so confident.  I am a fan of some glam rock, early Motley Crue is pretty feminine but this takes the cake and many years before hand.  And of course the lyrics, kind of a passive aggressive way to be really filthy and of course I love it.  Anyways great song, probably a great LP, I am an idiot for letting it pass.

Moving to the right, why did I leave behind a Canadian press of the jazz classic? Don't know.  And of course, Anne Murray.  Only fitting I find this almost as soon as I crack the bin.  I used to have two copies of her debut and it is a great album.  This is her second and I shouldn't have left it behind.  I found two more copies later on while I dug.  Another stab in the back is just now realizing that while the debut was released in both Canada and the USA (once I found the Canadian press I gifted the USA copy to a friend), the second album was only released in Canada, so of course I probably won't run across another one.  At this point to keep from self destructing as I write this I can only plan that I get wind of it if anyone goes back so I can quickly sell myself on the job, that I am more qualified to do it.  Cross your fingers for me. 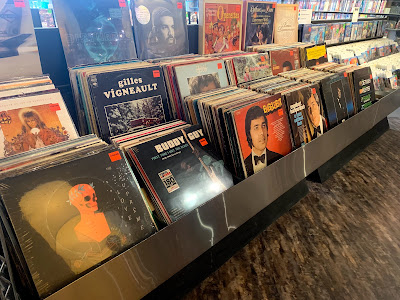 Just around the corner there was some more vinyl.  There was a little new stock but still mostly used.  Lots of French Canadian artists I never heard of, interesting that when I was in Ontario I don't remember seeing much French stuff but here there was lots.  Not surprising since I was in Quebec but you'd think you'd see something in Ontario.  Not really.  At any rate, a cool store in a quiet mall that I recommend others check out - and I added a review and photos to Google Maps so the next poor bastard that drives up from the States knows what he is getting himself into.