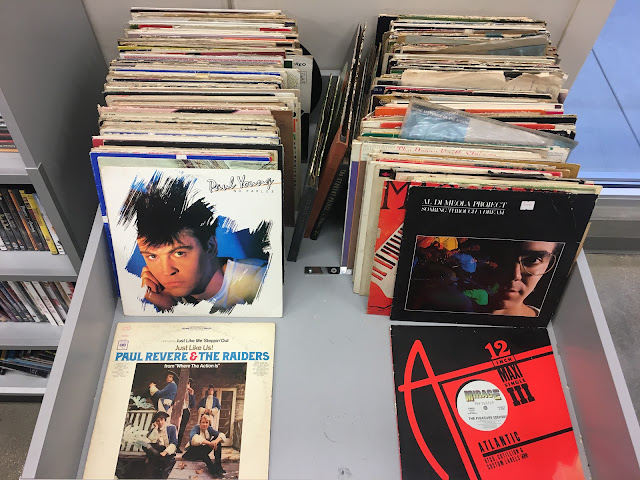 Not sure how I never hit this place even once before over the years.  Granted I don't get out there that often but it isn't very far from my standard stomping grounds.

Just a singular, clean bin with a handful of interesting finds as displayed here.  The Paul Young album is one shy of his big hit which followed up.  This one is notable for a Joy Division cover at a time that surely no one in the pop realm could have been familiar.  The Al Dimeola record...oh man, I'd be all over that.  But (did you guess it yet?) the jacket was empty with the wax nowhere to be found.  Damn!

At lower left you see some 60s garage rock.  I already have this (and mine is mono).  I was shocked to just see that it was almost a year and a half ago that I copped it, I swore that had to be this last summer.  Time flies...

Last up is an electro-funk 12" not to be confused with the delightfully cute female garage rock group from decades before.  Interesting enough for me to have put it up front for the photo but it ends there.  As did my visit to Goodwill.  I have actually been back to the area twice since, in just a few weeks.  I'll swing back through before long in search of hot new warez...