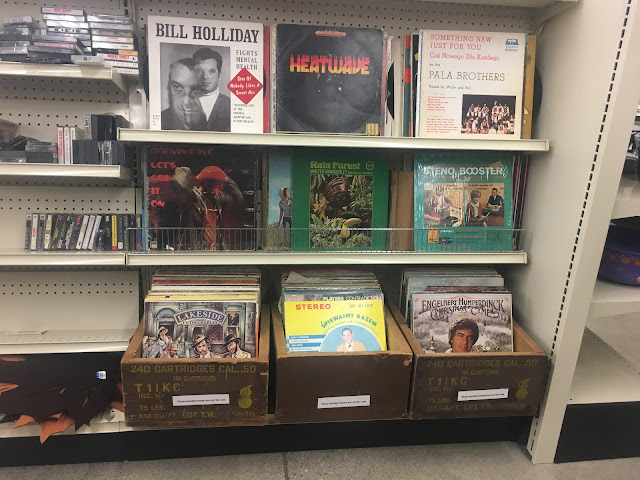 My history with the Dyer Goodwill runs deep.  Back before it was even fully constructed and I invited myself inside through the many polka records I have pulled out of here, and even some weird rarities I just went ahead and sold for profit.  Haven't been through since early spring so I enjoyed my trip out this way and of course again, it was filled with scores.

Who the hell is Bill Holliday? Well I can tell you he is dead, so you don't have to whisper when you ask such a question.  More on this later.

Heatwave and Lakeside caught my eye, I don't remember now but I think one of them was just an empty jacket.  I have to believe the same owner once had both of these.  Speaking of empty jackets, yes, sadly the Marvin Gaye was definately empty.  It also looked like a dog had been casually chewing on the jacket for years.

The Pala Brothers and Lil' Wally albums showed that there is still a stash of Chicago polka filtering through the store.  The Eng record is just for kicks but the Walter Wanderley is a real gem waiting for someone.  The jacket is tore up pretty bad but the vinyl looks listenable so I hope someone takes this home (I scored my own long ago).

That Bill Holliday album was just odd.  My Spidey sense was going haywire.  It seemed to be a comedy album but it reeked of something more sinister.  I did a couple quick searches on my phone for the record or at least some info on old Bill but found almost nothing.  It is super clean so I did end up buying it and I am not disappointed.  This is pure mid 60s comedy in a small club and Bill is just an obnoxious type of comic who just riffs on anything.  He slows starts to work some racist material into his act but to me it was just part of the larger persona which again, it purely abrasive and out of hand.  The crowd just eats it up.  This is truly a recording of another era, long gone by.  Glad I grabbed it.