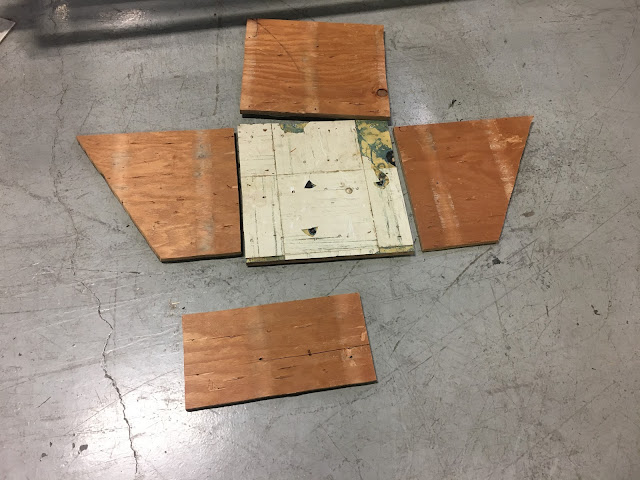 My girlfriend hates her kitchen floor.  And now, we find ourselves here.

She hated that floor and complained about it all the time.  Until she struck a deal with a friend of a friend who does remodeling (and put a new roof on her house), and they came to an agreement of barter for labor, if she would buy the tile.  Her and I headed to the store and bought 90 tiles (those were heavy!) and a few weeks later, he put them in.

This left behind a large amount of scrap which included not just the old crappy peel/stick linoleum but two separate subfloors (replaced with cement board) and two more layers of old tile beyond that from god knows when.  I agreed to help dispose of this at a (legal) site I have access to so I dragged the stuff away.

After I dumped it and somehow avoided getting stuck with the literally thousands of 6" nails that stuck through the bottom of the plywood, I got to thinking about how I wished I could have salvaged some of it.  I salvage lumber all the time and this was a lot, but alas it was coated with old tile and had so many nails and staples in it I didn't know where to begin.

Then I got to thinking about how maybe I could salvage just enough to build a crate.  How bad could that be? You can probably guess the answer ("pretty bad").  Also, long ago I began a series of four crates.  I never made the fourth because I got a hold of a nice locking box and that filled the last spot in the shelf.  So really, I don't even have a place for this.  But my OCD was intense that day, so off to work I went.

I figured I needed roughly five pieces 12" x 12" which would give me more than enough to work with.  The contractor had taken a circular saw and set the depth to go through all of this mess down to the joists and he cut it into random pieces but many were probably double what I was looking for.  So I pulled out enough square footage and got to work.

First thing, I decided what I really wanted was the old, original subfloor.  This was some kind of really old and really thick plywood.  So I bashed a crowbar between that and the second (much thinner and crappier) subfloor and pried them apart.  Of course there was so many nails and staples holding it together it did not come apart cleanly so I did my best then picked the bits and pieces off.

Next step was to try and remove the nails.  The nails were used through this old subfloor (which may have been from the 40s or 50s) down into the joists.  Then two layers of tile (which I wanted, more or less) was laid on top of it.  So I could tap the nails out but it would crack like perfect bullet holes through the tile.  So after a spell, I got all those out.

Next were the staples, if you want to call them that.  Someone must have had a (at the time) new fangled staple/brad gun and just went berzerk, blasting thousands of the things through and they were LONG.  For a time, I gave up on it and decided they could stay.  But it drove me crazy so I eventually figured out a method using a very thin screwdriver and a hammer, and another larger screwdriver and a pilers.  I would work the staple out just enough that I could grab it with the pliers, then use the larger screwdriver handle as leverage to pry it out.  This led to me smashing my knuckles on the wood about 200 times when the staple would fly out.  Many of them broke and had to have their individual tines ripped out one at a time.  I thought it would never end.  But like all things, it eventually did.

The rest came easy.  I cut it into my shapes as I have done so many times before with a sawzall.  Then I used my Kreg jig to screw them all together.  I did some minor sanding (not on the tiled side) as well.  I elected to keep the tiled sides on the inside for the back and bottom so they would be seen.  The rest I did on the outside.  Funny since no one will likely ever see this thing but myself.

But funniest of all is that when it was done I was showing it off to a coworker and he mentioned that the old tile might have asbestos on it.  I commented that I wasnt' worried, it isn't like I rubbed it all over my body or something.  He said he agreed, it was only really dangerous once it becomes airborn.

Like if you sand or cut it with a saw.   Yikes. 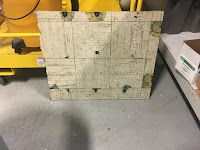 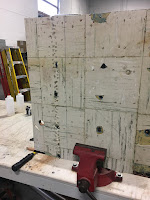 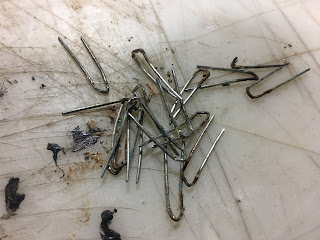 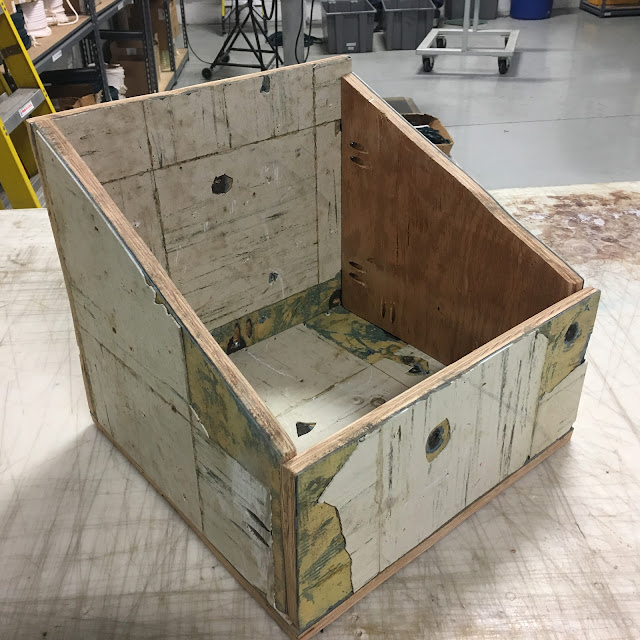 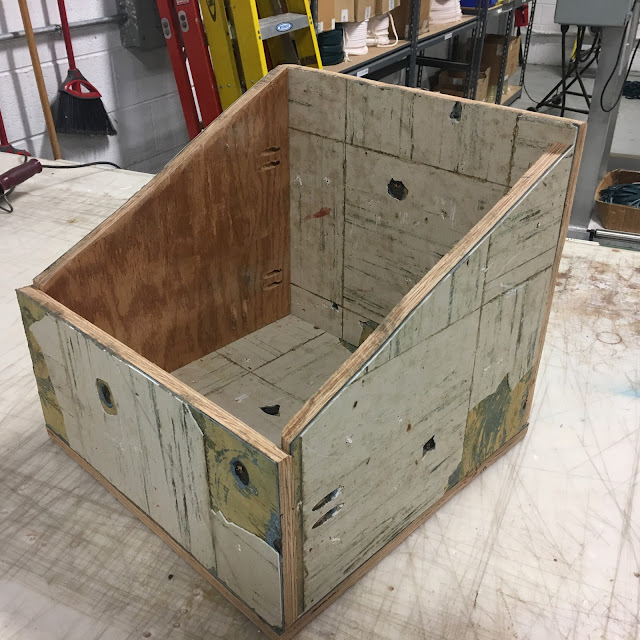