The ghosts of barbershop's past.....

I am fairly confident I have the biggest and/or best collection of barbershop vinyl on the planet.  It started so long ago as it often does, in Michigan.  That state is home to some of the best quartets the world has ever known.  After waiting years and begging, discogs added barbershop as a style which led to some serious retrofitting of existing releases in the database. So at this point I have added 372 barbershop releases to the database.  But it also allows me to search my own collection, which looks like it is at 122 at the moment.  Not bad!  I have a mostly complete list at barbershopwiki.com that shows where I grabbed the individual platters.

This afternoon I recieved an interesting PM on discogs.  It was from a person who was aching to hear a specific (and relatively obscure) barbershop LP,. because a loved on performed on it so long ago and alas, they are no longer with us.  This has happend once before.  In both instances, the original request was to see if I would sell the LP.  I'd probably say no regardless but in both instances they were super rare LPs that I fought long and hard to attain.  But because I truly feel full of joy to share the music, I offered to rip the vinyl and put it in Google Drive so it could be downloaded.

Today's requester comes from eastern Ohio and has an interest in a Chord records quartet.  I have the entire Chord discography (including the 'handsome leather embossed album folder' which was available with series I) and this LP was one of the toughest to find.  I doubt I've ever even put it on but I did today.  Then I did a quick rip of the live songs performed on the annual competition albums.  Luckily, I do own all three that they performed on, I recorded these as a quick continuous mix.

I had to ask this person for some info on why they were so interested in this record and got an interesting response: 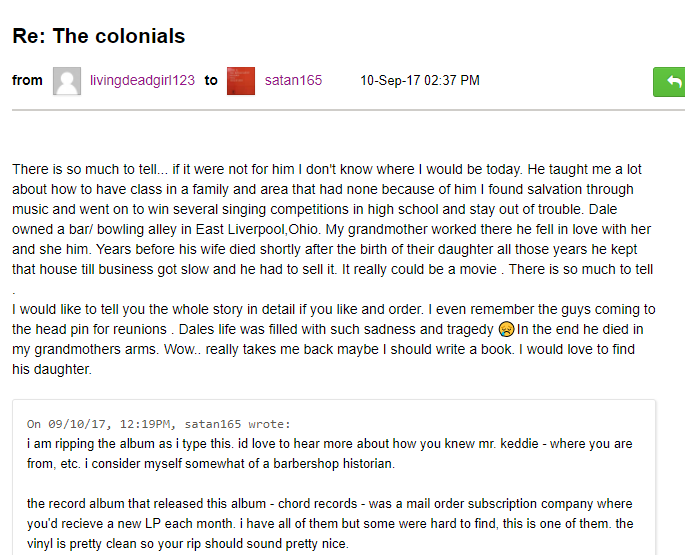 As I said above, this came up once before, at the beginning of the year.  I gladly ripped the album, the live competition songs and shared them at once to much delight of the person asking.  I recently found out that this quartet has another LP and even more recently I got a copy.  I sent the person a PM asking if they were interested but got no response.  No doubt, with their mission fulfilled, they have abandoned their discogs account. 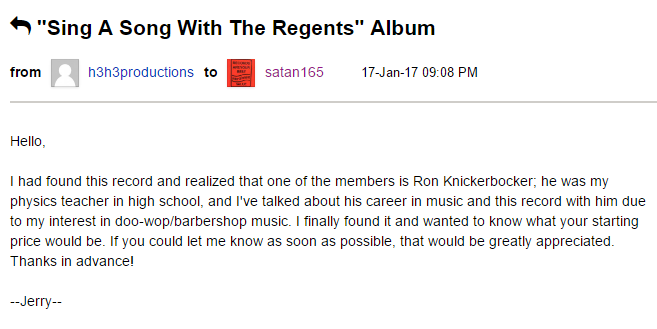 I have over 700 LPs, no doubt people have many more than that, but even someone with half of what I own will be hard pressed to listen to them all.  So it is an easy wish to grant, to help someone who earnestly seems to miss someone and this old album, carefully bagged and organized on my shelf is the only link.  In the case of the album discussed today, it is over 50 years old! How many others are still in circulation? Very few, surely.  Glad I could immortalize it for someone special.