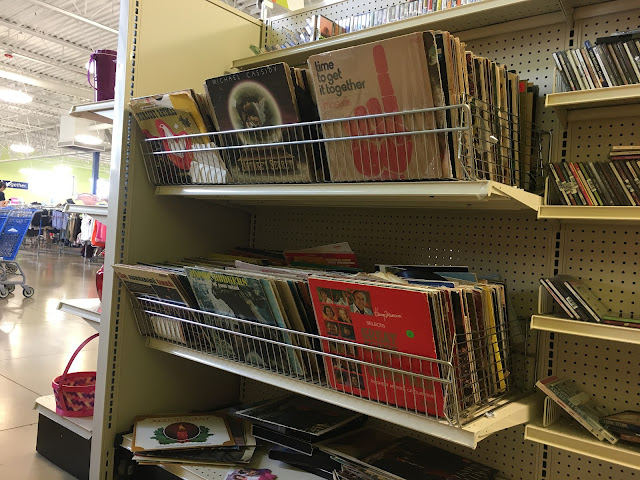 I've had a bad habit of neglecting the Plainfield Goodwill while I have showered the Avon Goodwill with attention during my numerous visits over the past couple years.  It wasn't intentional - the Avon store is right next to my hotel and I honestly forgot there was another one just a couple miles away.  I'd say that often times I was tired after working and didn't feel like driving over there but there were definitely some times the work was light and I had time.  But again, it just didn't dawn on me.

Well it did on this trip.  I found a junk heap of records stuffed into their bins and I dug them all, and even pulled a couple out.  And of course had to artfully line up all the Enge records I found. 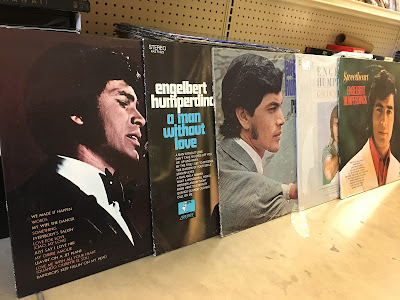 When you have dug thousands and thousands of junk records you start to develop a skill to recognize the same junk you see again and again.  This is what allows you to move through 100s of records quickly.  Because I am not looking for the good records, I'm looking for the bad records, and ignoring them.  So things stand out easily, there is a huge contrast when you see something that doesn't belong with the same old thrift store junk.  When I found this Braziliaan record, it stood out for many reasons besides the artist name and cover art.  For starters, the record label logo was unfamiliar.  Once I removed it I noticed instantly the quality of the jacket stock and then the strange way it opened like a gatefold, but not to reveal anything but the record inside - only the spine held the jacket front/back together!  This seems like a great example of people trying to seize upon the Bossa Nova trend (it is dated 1969).  I say that because the musicianship isn't very good, and I qualify that opinion with the multitude of bossa nova albums I already have in my collection.  But it is almost in an endearing way and regardless I'm glad to have such an odd import in my collection.  I did some research on the group and can find almost no information about them, though I did locate a number of other releases which I also added to the db.

I also grabbed another Foursider, I have the Sergio Mendes edition which I picked up long ago and I realize now I have to keep my eye out for the Baja Marimba band release.  I already have just about every A&M release for each of these three artists and I'm surprised I never came across this one before.  Glad I was able to scoop it up.