So let's recap my numerous (this would be #4) visits to the Goodwill in Dyer Indiana, which has not yet been open a year.  In a short time I've been blessed to have been able to stop by so many times, and more specifically to have been able to get so many scores in that time!

June 2016: not yet open
August 2016: autographed Eddie Blazonczyk (just the jacket) plus a rare proto-house record which I sold for 40x what I paid.
January 2017: found the missing record I could not find on my previous visit

So this time again, I was not shocked to continue to find more polka.  Better yet, it was stuff that I know wasn't out last time.  They must have a large stash of polka but as all Goodwill's periodically switch what is in the bins, the supply gets petered out over many months.  So I walked in and saw the three below - the first I need (and purchased, of course), the second I already have (found at a local Goodwill) and the third I passed on, though that is some pure, legit polka if there ever was any.

The record I grabbed is entirely in Polish which is just a tiny bit disappointing to a blatant American like myself, but more important is the rear jacket which shows the credits.  I had read that Jerry Darlak got started as a drummer (much more well known for playing the squeeze box in the Versatones) but never saw the proof.  That aside, the credit on trumpet was even more interesting.  No question this is Tony Paliga of the Paliga Polka Dots of EXTREMELY nearby Hammond.  Technically I can't prove that, but the Chicago-Indiana connection (not referring to where I found the record, that is just a coincidence) and the unique last name, I rolled the dice.  Both gents are now credited for this release on discogs.

It was a bit disappointing to see that there are now only two levels of LPs (counting the wooden crates at the bottom).  Previously there was a third - now it is all 7".  As long as they keep the polka coming, I don't mind! 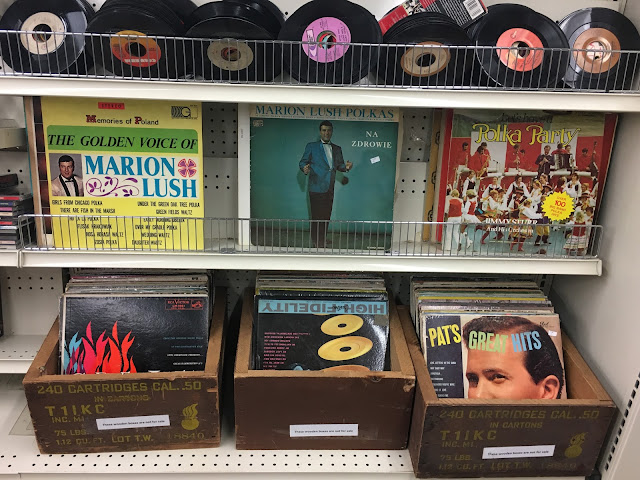