Found myself in Avon again - couldn't wait to get free from my work and head back to that Goodwill I had so much luck at.  Of course, there was nothing this time.  Oh well.

I went back to my hotel and laid low for a minute then decided I wouldn't strike out that easily! I checked the map and found a couple record stores but none were that close.  One was especially odd, it had only a couple reviews and they were really bad.  There was no photos for the place and I was convinced it wasn't a legit, operating store.  So I called and asked if they had records.  Someone answered the phone - then they answered yes.  And I was off!

World Record Shoppe is a real dump - about half the store is CDs in those old plastic 'racks' and they are all $10-15 and looked like mostly junk.  The records are along the back wall and sort of organized by genre, but then there is a large $1 bin as well.  The place is on Keystone Court, which is kind of just part of a larger parking lot for a whole bunch of other stores.  I actually parked, got out and walked about a block because I didn't understand where the place was.  It is in the back of the little strip mall, kind of in another strip mall of it's own.  Inside, there was a lot of cluttered junk around and I swear there was no heat in there.  At the counter, a fella sat behind the register, surrounded by all the other stuff he sells like marijuana smoking junk like pipes and what not, cologne, dollar store type stuff. 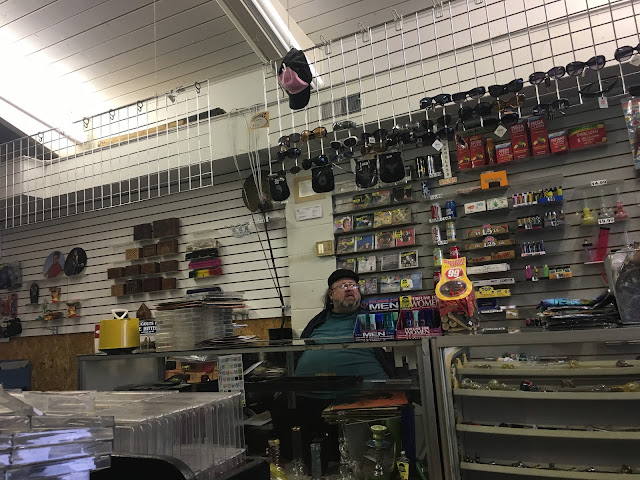 I initially glanced through the genre/artist specific bins looking for a few odds and ends but nothing panned out.  So I went over to the dollar bin and just went through it all.  The bins were so stuffed I had to pull a pile out of each so they would flip.  There were also a few stacks just laid on top which I had to move around.  Found absolutely nothing of interest except a marginally cool Tom Jones live album (which I already have) with a cool retail sticker. 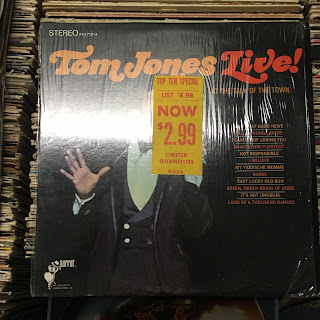 Speaking of this album, I was always told that on Parrot releases, if the Parrot logo is in a box, it is a stereo only release.  If the Parrott logo is NOT in a box, it comes in mono and stereo.  I have proven this correct already on the first two Engelbert albums and the first 5 Tom Jones albums.  But this one is a mystery because it has the logo without the box but I have never, ever seen a mono version.  Now, you might say that I haven't seen many so how would I know.  Well of course you can look through this blog and imagine how many 100s I've looked at in thrift stores (as Tom and Eng are populated in every thrift store in the land).  But that isn't why I think I have a strong case the record doesn't exist. 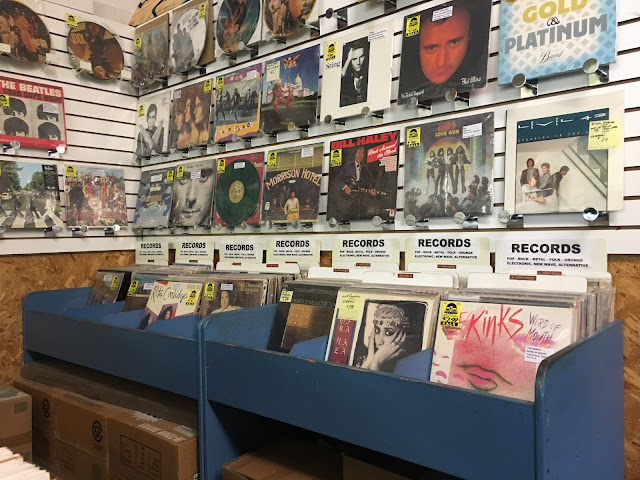 I have the eBay app on my phone which is really cool because you can 'follow' searches.  So you have your set of keywords and refinements and whenever there are new items, a little dot appears next to that search in your list.  Then you click and see the new items.  I can assure you that people list at least one copy on eBay every single day of the year.  So I have looked through many more hundreds in this way, I even have a couple different searches saved to make sure none fall through the cracks.  So unless someone can show me a mono USA pressing, I don't believe it, logo be damned.

Back on track - after I dug the entire dollar bin I decided I'd go back and just look through everything else top to bottom.  I didn't have anything else to do and there weren't that many albums in this dump.  So I started at 'A' and just kept on truckin'.  And what do you know - I found something that has been on my want list for years, plus it was sealed and it was only $4 (which says a lot as everything was overpriced in this place).

So I started to walk over to the counter when I noticed a whole ton of 7"s right by the register.  As soon as I started to stoop down to start digging again, the clerk said 'those aren't for sale'.  I couldn't believe this attitude in a place this corroded.  I have a lot of trouble believing they sell many records (or CDs) here, period. 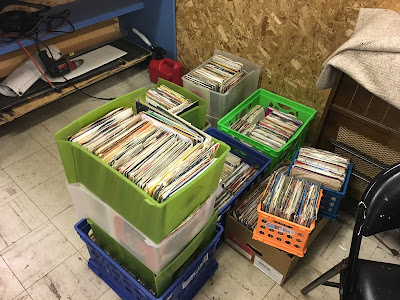 So I casually said 'that's interesting....the records aren't for sale...in a record store'.  He responded with "c'mon, they do that everywhere".  I asked who exactly 'they' refers to and he elaborated: he claimed that all record stores have huge inventory that they refuse to sell.  Well I hate to brag but I have more hard evidence of record store visits than most people (even if I haven't visited the most), so I beg to differ on that.  But I just shook my head and laughed, paid and got out of there.  One last time: what a dump! 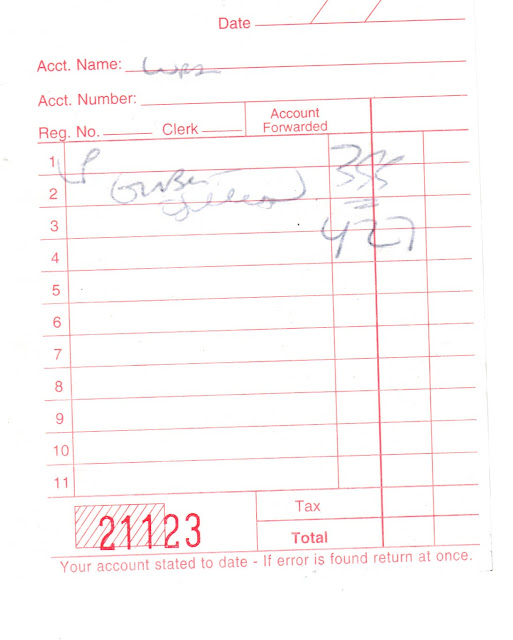 Email ThisBlogThis!Share to TwitterShare to FacebookShare to Pinterest
Labels: avon/plainfield, indiana, out of state, record store