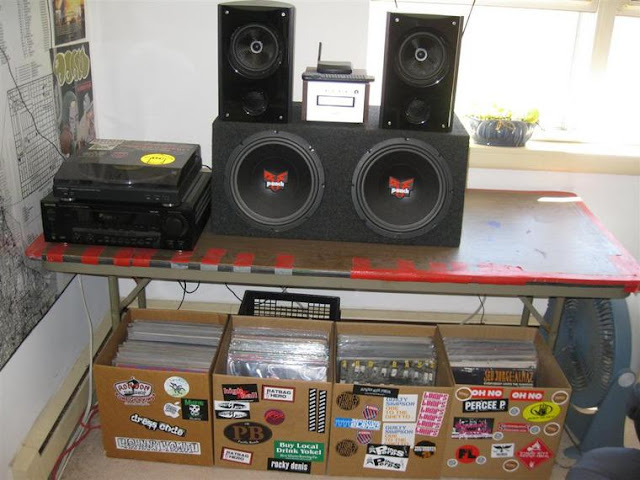 I dug up some old pics of my set up from a few years ago when my collection was smaller and my system was kind of screwy.  I already revealed in another post a shot of my set up previous to this one, with the old beat up 1200s and Vestax mixer.  The image above is from 2010.  The turntable you see is an Audio Technica which I paid about $100 for at Best Buy at least 10 years ago.  I actually had it previous to the 1200s, then put it in storage.  Then I dumped the 1200s, the mixer and an old stereo with speakers I had in the other room on Craigs List.  I used the money to buy the speakers you see here, which I think I paid about $150 for (again, at Best Buy).  They are Insignia NS-82111s and I still have them today and they still sound great.  The Kenwood receiver you see below I also still have, I got it from a guy that used to live in my building who is now unfortunately no longer with us.  It is an absolutely great unit that I've had for a long, long time.  I gave my girlfriend the turntable at least two years ago and I listened to it as recently as this week.

The woofers are R-F 12s as you can see, once upon a time I had a decent system in my car (I don't even have a car anymore and haven't for almost 10 years).  I eventually sold all the components, mostly on eBay (where I bought some of them) after my head unit got stolen and my dash got all messed up.  I never sold the 12s because they were way too heavy to ship.  They were blown and I got them reconed at a place on Diversey in Elmwood Park a long time ago.  Then about 3-4 years ago, I signed up on a message board with audiophiles asking for an easy way to crossover the high frequencies out of them (as the receiver does not have EQ or a subwoofer channel).  I bought some really cheap parts from Parts Express and soldered them all together.  On top of the subs is an 8-track player from a period where I got into dissecting 8-track tapes and rebuilding them, I still have a small collection, this player died but I have another (which is not currently hooked up).  On top of that is the remote for my receiver (which I never use as it is arm's length from where I am sitting right now, same as it was then) and behind that is the transmitter for an ancient wireless speaker I no longer have.  It was an outdoor Advent speaker which I bought on ebay and had for at least 10 years.  I had it setup in the bathroom so I could listen to music while I took a shower.  The sound was pretty poor and sometimes the signal would break up.  Worst of all it was a giant green 'orb', everyone used to come over and be like 'what the hell is that'.  It ran on a DC adapter but it also could take four D batteries and even recharge them.  You had to actually take the whole thing apart with a screwdriver to change the batteries.  I eventually got sick of looking at it and didn't really listen to it anymore so I dumped it at an electronics recycling spot.

Obviously, I also eventually ditched the ugly, beat up folding table and also built some racks for my vinyl.  The pic below is from 2009.  As for the vinyl, what you see here are 14x14x14 boxes from Uline which work great as 'poor man's crates'.  You can even see that in the two below pics some time has passed as the stickers are different.  On Box #2 is the retail promo sticker from the 'Rise' LP promoting the single.  It's adhesive just died one day and the sticker fell off so I taped it on there.  I still have one of those boxes which I have some tools in and other random junk.  I estimate the collection was no more than 200 at that time and probably less.  In both pics it looks like box #3 was my hiphop vinyl and box #4 was my Stones Throw vinyl.  Looks like maybe 'Lincoln' is in the front of box #1 in the first pic. 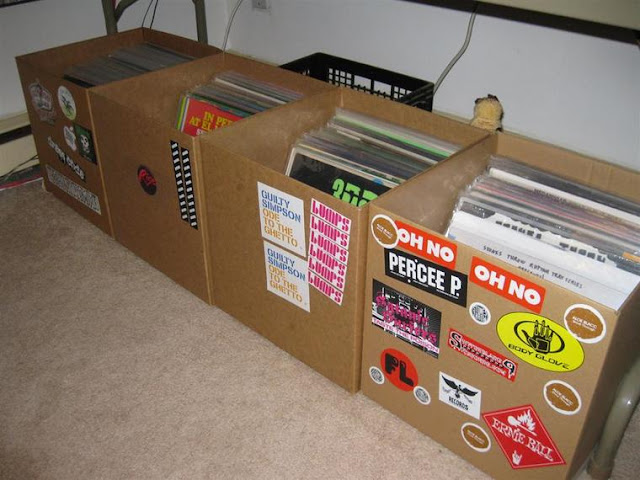