It has been nearly two and a half years since I first visited Cheap Kiss records inside Cornerstone Books.  I have been back at least once since to keep and eye on the bins.  This time, I was there to buy books, not records.  I had a bunch of gifts for an Christmas party and opted to get all my friends books.  I ended up having trouble with the last one and could not find anything suitable for the host so I started looking at the vinyl as she is a vinyl collector also.  I was becoming quickly reminded how crappy the selection is here and how overpriced it is.  Then I struck gold and found a record I knew she would love (this has since been proven true).  My work completed, I figured I'd glance around just in case I found something wild for myself.

I headed over to the 'miscellaneous' section because that is where the barbershop would be if they had any.  And guess what - they did! I found not one but two vinyls, neither of which I have.  I passed on the Suntones album,  I currently have 5 of their 9 LPs, this would be six but I couldn't live with the $8 price tag unless it was autographed which obviously it was not.  But the real reason I was able to exercise such discretion is that I found a record I'd much rather have and for only $3! I wonder what the criteria for pricing these was - I could ask that same question about much of the inventory in general.  A tiny address label on the Suntones record states that it was once owned by an "E. B. Rhea Jr." of nearby Mt. Prospect.  I assume both were that persons - glad to have one of their pieces in the collection (and I now only need one more Grandma's Boys LP). 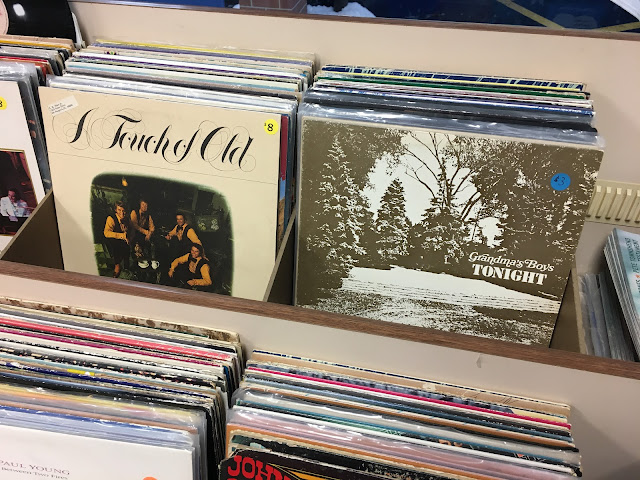 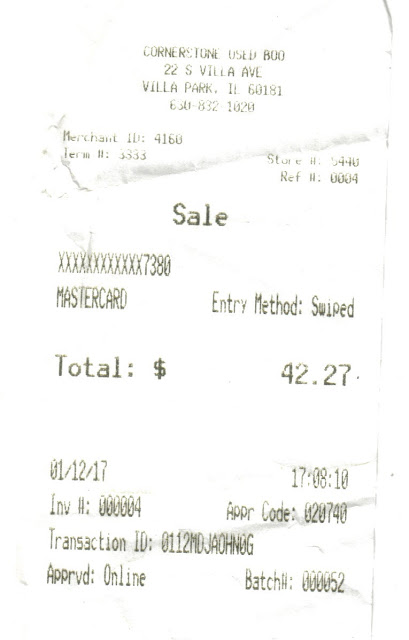 I don't know how many times I've had buyers regret for passing up a record then thinking about it for days and wishing I hadn't left it behind.  I had a situation at this Goodwill before but not quite in the terms I just described: I ended up buying just a jacket as the record was missing.  Where was the vinyl? I looked through everything twice, it was nowhere to be found.  Admittedly, I did not look inside every record but as I walked out I became increasingly convinced that is where it resided.  I relegated myself to the thought that it would never be mine.  I remedied this in a way that solved the problem but did not satisfy my collecting related OCD.  Still, it was the best I could do.

I was lucky enough to be heading home from Warsaw Indiana and I decided to take Old 30 west most of the way even if it wasn't the fastest thoroughfare.  I remembered this shop was on 30 so I checked the map and made my plan.

I walked in...THE DAMN RECORD WAS STARING ME IN THE FACE.  That's right - the record I could not find before was not on the top shelf of the rack, not in a sleeve and up front.  I couldn't believe it (still can't)!  So I continued my dig to see what else I could find, and things got more interesting, quick.


The four records plus mine make five Chicago Polka records ranging over nearly 20 years.  My guess is that here just on the Illinois border and not far from area where many legit polka clubs existed for many years, a serious polka fan lived near Dyer.  However, this person was a bit sloppy with their vinyl.  But I'd like to think that they were having some serious listening sessions or maybe a party - all the vinyl got taken out and just jammed back inside something else.  The interesting thing is that none of these records were out during my last visit in August.  This is because every Goodwill has a load of vinyl in the back, so they can periodically rotate everything and just junk what didn't sell.  What might I find on my next visit? And when will that visit be? I do not know!

Far from the reason I collect, but worthy of note are two long term investments I made which I was recently able to turn.  I was able to scoop these no doubt because I did check their value and desirability on discogs but when you are flipping hundreds of records, experience allows me to notice something that seems out of place.  In many ways, lots of records seem out of place but checking all of them (or even a portion) would lead to pretty inefficient digging.  You just get intuition that something is special - even if not to me.  Both of these records I priced very liberally (low) and allowed users to send me offers, I just wanted to move them.  Ironically, it doesn't look like either buyer bothered to make an offer, they just grabbed it at the listed price. 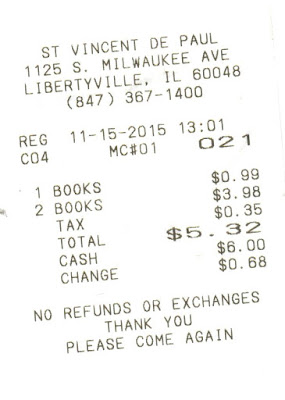 Item number two was much more recent, I grabbed it on 8/20/16.  It sold on 10/14/16 - less than two months! I purchased this for 99 cents but technically it was less as I jammed it inside an empty (and autographed!) jacket.  That jacket in itself is worth certainly more than a buck to me so I feel like I got this one for free.  Either way, I turned this one around for $20!