Savers, Arlington Heights (and a couple other old haunts) 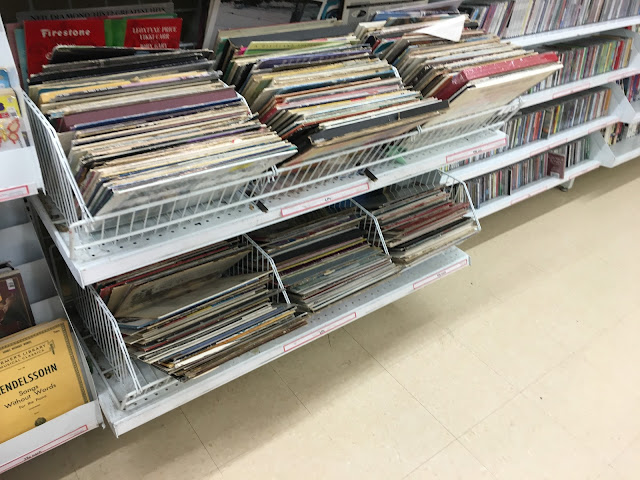 This Savers has eluded me for a few years, it is just too far out of the way to force me to get up there and I don't get that way for work often enough.  Finally made time on a lazy Sunday in my mom's borrowed car as I housesit for them while they were away on vacation.

I trudged through the bins while another fellow was at my elbow exploring the collection of CDs.  He largely stayed out of my way so I didn't pay him much mind.  I initially found a Lil' Wally reissue from his later era when he moved to Miami Beach.  You can tell by the Jay Jay Records address moving from South Kedzie Ave. to Florida, and more entertainingly, the rear jackets always display a large selection of 'stuff' that he sold.  There are many parallels one could make between Lil' Wally and Master P and this is yet another.  Check out some of the cool stuff.

There wasn't even any other polka records and I was getting disheartened.  I was on bin 5 of 6 when I struck gold! I found another Bob James record I do not have and I have already run through it a couple times.  Some of my favorite side men here, just a classic record.  But when I grabbed it, I opened the gatefold and found an empty paper inner sleeve.  This scared me - of course I still had to check inside the jacket, but I immediately became pessimistic (this record didn't belong in a Savers anyway) - would I find nothing? No, I did find something - the record, in great condition AND in the original CTI inner sleeve.  Doesn't get any better than that? (Actually it does, I found a piece of Pyrex I need so I was really flying high).  As soon as I stepped out of the way, my friend the CD collector stepped in preventing me from getting a good shot.  I waited and eventually got one but I figured I'd make him a Z-list celebrity first.  As soon as he was done he walked off, with a cart in tow overflowing with clothes.  Hope he got some scores too. 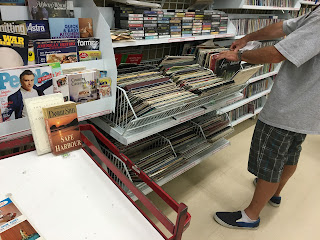 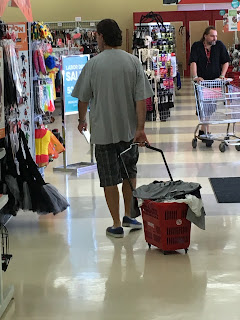 So we headed back towards home and figured we would make a couple more stops.  First up with The Shelter, where I have actually found some Bob James (a promo, no less) and a couple other interesting platters.  Things have been getting worse record-wise at the Shelter for quite a while.  All that is left is a tiny, shoddy bookshelf in the corner of the store, not the beautiful dual bin they once had (or even the multi-cube shelf, they are not on configuration #3).  I hope it found a good home.  There was nothing but junk and with every flip the whole thing would sway and I worried it would topple over.  I actually moved that Jack Jones album to the end, it is all Bread covers and very, very mildly interested me. 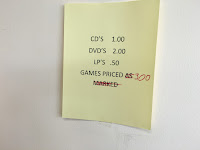 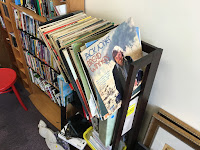 After that we were going to check out Kenneth Young resale.  I witnessed some of the wildest shenanigans in a thrift store ever, back on the 4th of July weekend in 2015.  But alas, it is no more.  RIP - glad I got to check it out.

After that, we were headed to the WINGS resale shop which I checked out once before long ago.  But Google Maps was confusing me and I missed my turn.  As I cursed and looked for a way to turn around, I was upon Savers in Hoffman Estates.  I checked out both before on a trip - and I had found some nice scores in Savers that time, and I don't think I had been back.  I had high hopes. 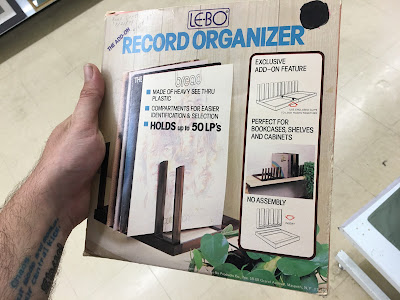 However, I found nothing except an array of the most beat up AND overpriced Pyrex ever.  And the above, still in it's box.  I almost bought it.  But I left it behind and moved on - one good record per day is enough for me! 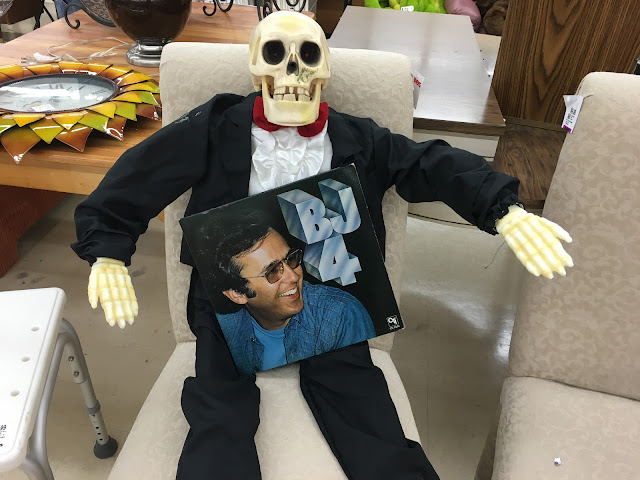