I don't post about hardware because there is nothing to post.  I have had the same setup for quite a while and haven't changed anything.  That is, until now.

Let me back up.  The first set up I had were two Technique 1200s and a Vestax PMC 17A.  I bought that setup complete on ebay and had it shipped to my house in giant boxes.  I don't remember what I paid but it was too much.  I believe I bought this in 2004 or 2005.

The Techniques were beat up pretty bad but worked great, they just looked like hell.  I brought them in to have a guy look at them and I think he just charged me to let them sit in his shop for a while.  I later sold everything on craigslist, along with an old reciever and speakers I had hooked up to it.  I do miss that mixer, it was perfect and has every function I would ever want without too many additional bells and whistles I don't care about.

I had a just had a basic Audio Technica belt drive turntable for a few years that I used to play my vinyl. I eventually gave it to my girlfriend who still uses it regularly.  Probably around early 2012 I got the deal of a lifetime.  I had a friend who owned (leased) a bar and he bought a big PA system on craigslist.  It was a package deal so he also got two Numark turntables and a Numark mixer.  It was all real basic entry level stuff but I was so excited to fool around with it.  He didn't want it so I think I offered him $150 or something and he took it.  Then I went back on craigslist and got an AWESOME coffin/flight case that held everything for like $50.  I modified the case a bit to hold the mixer and that setup hasn't changed in a long time.  And of course I built a giant stand to hold the whole thing, but you've seen that before. 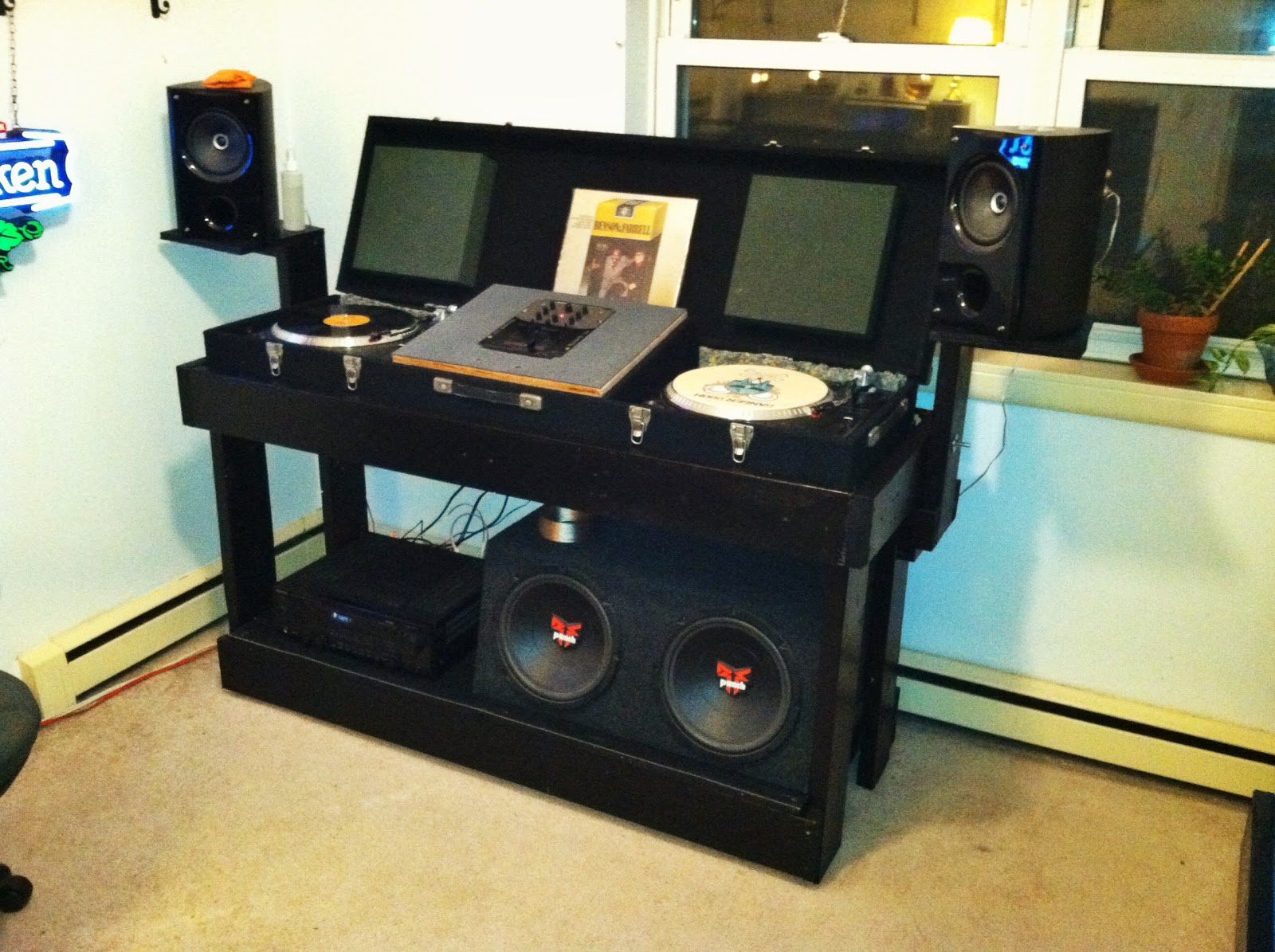 But it needs to change because the mixer sucks.  It has one glaring problem - no VU meters.  So it is difficult to keep my volume controlled when I switch decks and I have to do it by ear (or, as I am usually recording when I'm "mixing", I have to spin around and try to watch the VU meters on Audacity which is obviously not a great way to go about things).  So I started doing some window shopping on ebay.

At first, I figured I'd try to get another Numark because I didn't really care what brand I got that much, so long as it had VU meters and the other basics.  But then I got to thinking.  I didn't even need some of the stuff on my old mixer.  I didn't care about EQ, even the pan controls.  All I really need to be able to do is switch from one deck to another via some kind of fade, and to be able to cue the next song in my headphones.

So then I came across these old Realistic mixers and I knew this was what I wanted.  There is a flood of them on ebay and there are a few different models.  So I did some research and pulled the trigger - on all of them.  I ended up buying three in a 10 day period or so and now I have one of each model that I could find. (Real quick I should add that I just sold my old mixer for $15!)

Features (and lack of) include:
-no crossfader
-no master volume fader
-no cue volume
-2 microphone inputs
-1 tape/aux input
-can run on batteries or AC adapter (not included; more on that below) 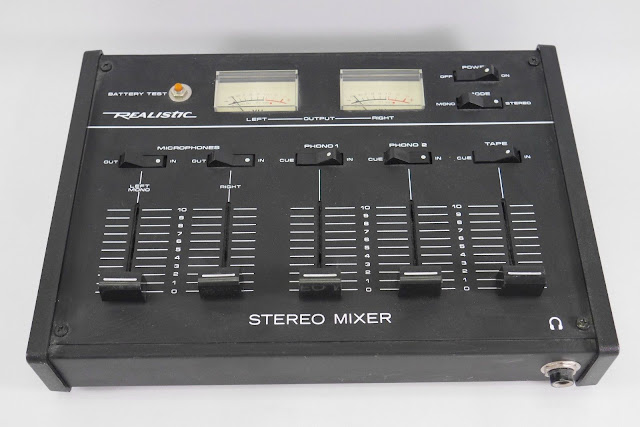 The 32-1101A is in very clean condition.  It has some tape adhesive residue on the front (probably from some kind of label on microphone input #2) and it has 'PHYSICS' written near the bottom in black permanent marker.  Perhaps this was used in a large classroom as part of a PA system for the teacher to amplify his voice during lectures.  Paid only $12 for this unit. 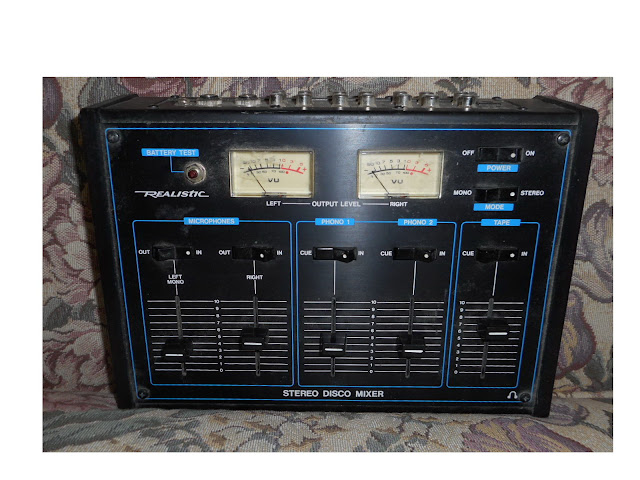 The 32-1100B definately looks older.  Looks like it had sat in a garage or something because it has a layer of dust/dirt on it which is difficult to get to with all the faders in the way.  It has electric blue highlights on the front which look stylish.and at the bottom it says 'STEREO DISCO MIXER' (the 1101A just says 'STEREO MIXER').  I thought that was pretty cool, the implication being that those were some of the original applications for a small, functional mixer to be used by a DJ who was doing more than just switching from song to song.  I paid only $12 for this but had to have it shipped from Canada which took a while.

I knew I had no interest in getting batteries to use these things, and I knew both could use an AC adapter.  I was in the midst of trying to determine the voltage and connector style so I could cross reference one when I looked on the bottom of the unit and Realistic had shared that information up front! I got a brand new (not sure how that is possible, must be 20 years old) Archer 273-1454 for $8 and of course it works on both units. 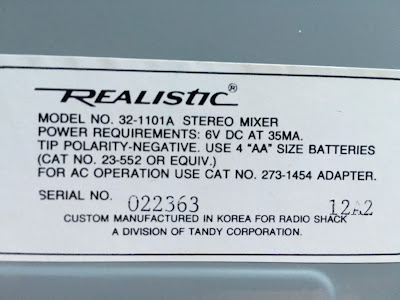 Features include:
-crossfader
-backlit VU meters
-master volume fader
-cue volume pot
-3 microphone inputs with pan pots
-does not have a dedicated third (tape/aux) input, but the 2 phono inputs can be switched to a line level input with a switch
-this unit cannot run on batteries; the AC cord is hardwired in 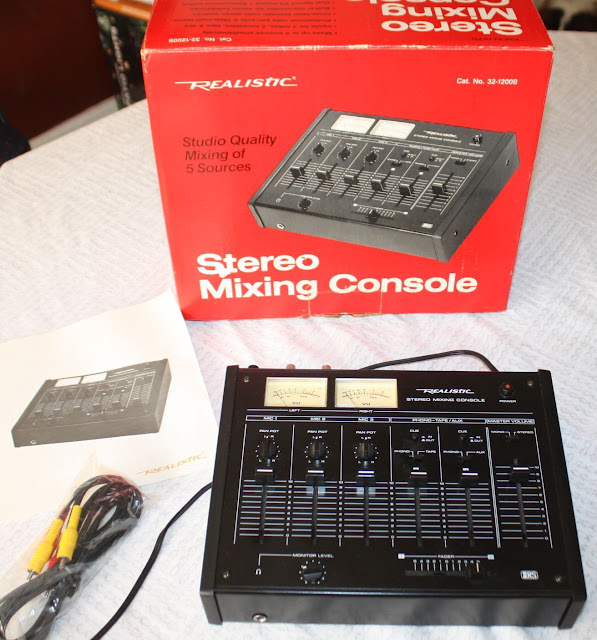 This unit is in great condition, obviously as it came in the box.  Very lightly used.  This was the only one I had to get into a bidding war on which drove the price up to a whopping $13.06.  It even came with what appears to be a brand new set of RCAs still in their little baggie, which were included with the unit.

So there is the background, leaving only one question: how do they work?

All units are totally functional and I tested them all exhaustively (the phono inputs at least).  The 32-1200B of course is the nicest, the action on the faders and crossfader is really nice.  That unit also is definitely the loudest, I can push bigger levels on the meters and it is obvious through the speakers.

I would be the happiest person in the world save for one small fact, which I guess I can live with.  The cue function is not straightforward at all, all three units function in this way but I cannot for the life of me figure out why this would be preferable to anyone.  I was convinced one or more of the mixers were damaged and I cannot count how many times I disconnected one and connected another to compare results.  If I did not have the manual with the 1200B to explain it, I might have tossed them all in the trash.  I'll let Realistic explain, it is too confusing to even think about: 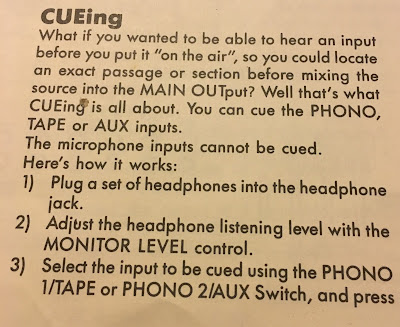 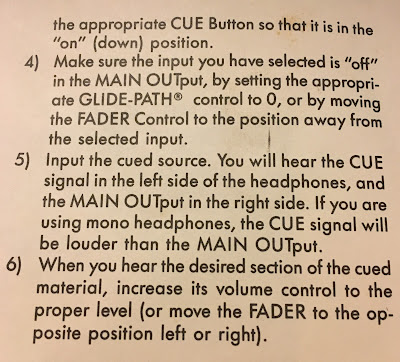 So basically, it is not possible to be listening to one source while the other plays - you HAVE to listen to both through the headphones, with one source in each ear.  I can see that this would be useful if you HAD to mix 'live' but when songs are 3 minutes, you have 120 seconds to get the record, and drop the needle, then make sure it is ready at the beginning (or whatever point you prefer).  As my needs are that simple, I can still manage with this odd function.  The manual also includes the schematic and I am tempted to crack it open and see if I can rewire things to meet my desires.  But I doubt it is that simple.

At any rate, I spent less on all three mixers than on all the other units I looked at and considered buying.  I need to rebuild my carpeted plywood for my new setup and I'll do that soon, I am entertaining a few ideas. 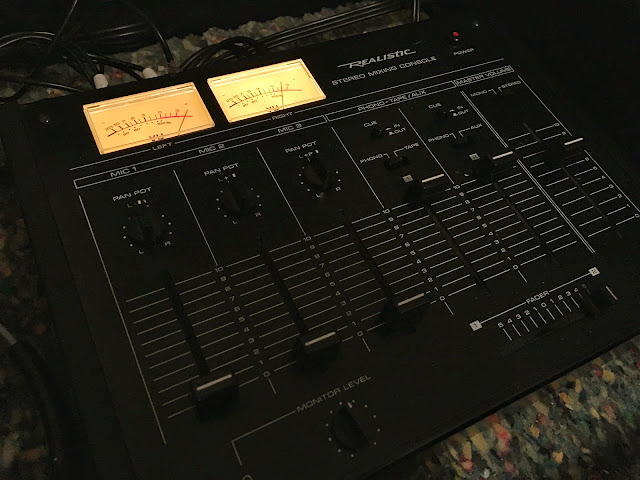 Email ThisBlogThis!Share to TwitterShare to FacebookShare to Pinterest
Labels: equipment