Headed back up to Cary.  In previous visits I have checked out a toy store and a record store.  Trip #3 I took a look around in a Goodwill and I found yet another on this jaunt.

This was a pretty clean store and I quickly discovered their stash on an end cap near the books. Two different Belafonte records greeted me and I dug onward and upward.


As soon as I spun around, I found yet more platters in crates and bins on some furniture.  The local barbershop chorus made an appearance, as they so often so in the northern and northwest suburbs.I came across some prog rock and a mono version of one of my all time faves, passed on both. 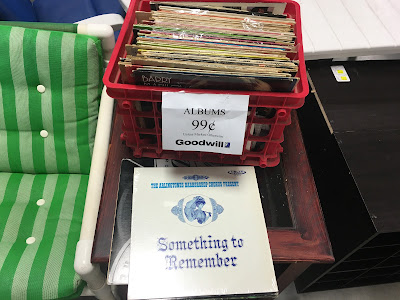 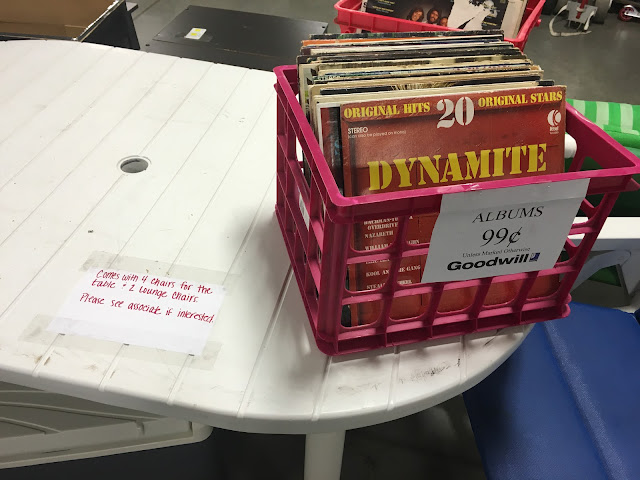 After that I found a few records worthy of note.  I bought none but did some research on the artists as all of them intrigued me:

Pictures At An Exhibition and Tomita's Greatest Hits - Never heard of Tomita before but obviously someone did and they donated their stuff.  Respect due - looks like Mr. Tomita passed away just this spring but sounds like he was a serious pioneer.  RIP.

Sonic Seasonings - I'd wager that the same person that donated the Tomita recording above also donated this one.  Another artist I never heard of and I commend them for having a sex change a good 30 years or more before it became a trendy thing to do.  Of the three electronic recordings, this one interested me the most due to the long form compositions.  I have a tiny bit of regret for letting it go.

No, No, No, My Friend (You're Wrong So Do It Again) - this one I have serious regret about leaving behind.  Super funky and with a fat groove.  Got to love the latin drums beating it up in the background over the trap kit.  The variety of voices almost don't quite mix together properly and it makes it beautiful.  This would hold a nice spot on my shelf next to another disco record I found so long ago.