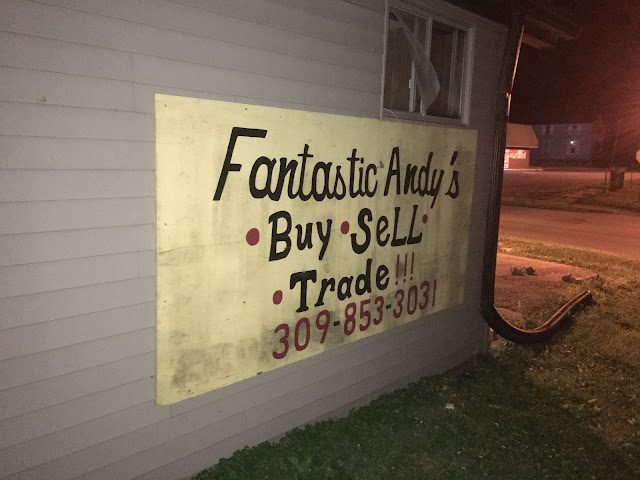 It is truly helpless to know that what was probably my favorite thrift store of all time is no more.  Fantastic Andy's of Kewanee Illinois closed sometime in early 2016.  I first visited Kewanee (and Andy's) in the late fall of 2014.  I went back a few times in 2015 but only blogged once almost exactly one year ago when I picked up some more platters.

I think I last was in there around Thanksgiving of last year.  I wish I could go back and savor that visit a bit longer or say thanks for Andy.  The thing that made this store great was 'the junk factor'.  I have no problem with antique malls and I've been in some high end thrift stores but of course you have to be very careful in places like that and the malls even have protocols to follow.  Again, I enjoy those experiences very much.  Then you have Goodwill - I estimate that I have documented visits to at least 35 of them all around the nation.  But they are often so 'middle of the road' that there is nothing to do there.  It isn't quite antiseptic, but where's the junk?

The junk factor has to be just right - there needs to be enough entertaining stuff in there to smile at and think 'who is going to buy that??'.  And most of all, there needs to be enough stuff in there that you DO want - and Andy's almost always fufilled that.  And when they didn't, well the place was entertaining enough just to roam around in.  He had scraps of paper everywhere with little notes: some described items, some were almost private messages that seemed to be just for you!

And of course you had Andy himself behind the register.  I never said anything to him I don't think, except 'thank you' and things like that.  But if there was ever a person that really had a castle - and he was surely the king - it was him.

504 N. East Street was the landmark of an empire.  Too many times we'd stop in then I'd run across the street to grab some beers for later that night.  I feel kind of bad that I took his picture without permission but now that the place is closed, and I'll surely never cross paths with him again, you better believe I am glad to took them.  I don't know how long the place was open but I know that it's gone now.

I just got back hours ago from yet another weekend out west.  I was there earlier this month and saw the place was shut down and you could see inside it was all demolished.  Even the sign out front was swinging by a single hinge, sad and dilapidated. I wonder what became of the alien on the roof? I hope Andy took him home - I'll bet he did.

Some animals had attempted to scorn the awesome legacy (and they failed) by tossing a brick or something through the side window.  This weekend I rode by bike over there after dark and parked out back.  When there was no traffic on East Street (and of course, I saw a cop as I waited), I darted inside to have a look around.  After I crunched through the broken glass and crawled over the wreckage, I took a couple pics.  Below is my evidence. 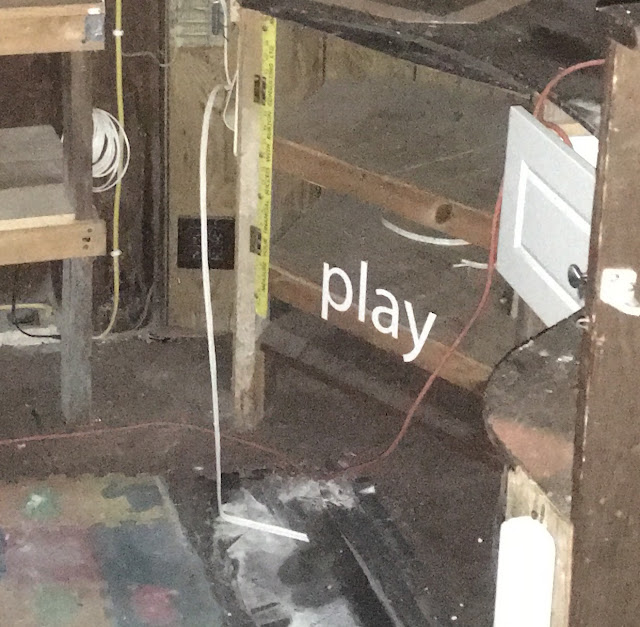