My adventures in central Wisconsin's metropolis of Appleton are long running and well documented.  Normally I only should be up here once a year if that, but in recent years I've had the excuse to be up here a few times.

On this trip, Monday was a travel day.  I left home about 1pm with a 4pm ETA.  However, I stopped in Sussex on the way to buy a bike for $75 (it is only my 6th bike, who's counting).  I got up there about 5:30pm and had a quick bite to eat before I had the rare chance to embark on an around town mission via bicycle.  What a treat!

There are so many places to choose from up and down College Ave. and beyond, not to mention my eventual need for beer (plenty of bars and liquor stores to choose from).  However it was getting into the evening and many of my spots for records were closing, so I had to choose wisely, and quickly.  I decided on Fox Valley Thrift where I had good luck in the past.  I only had about an half an hour before they closed and they were 4 miles away.  I knew I could pull that but I'd have to move briskly.

I headed west on College Ave. from my hotel and quickly determined that this was a road which is extremely not bike friendly.  So I headed south a block to find a parallel street with hopefully less (and slower moving) traffic.  I stopped and checked the map and decided that Spencer would take me most of the way there and hopefully was a bit more calm.

Things were indeed more of a joy to cycle down on my new wheels...I made it a couple miles before I saw a sign for Goodwill! I've been to (a) Goodwill in Appleton already - but I knew this wasn't it.  I have been to many cities with more than one but somehow this seemed odd.  I soon found out why.  I knew this would make a visit to Fox Valley impossible but I only would have had a few moments in there anyway before they began harassing me and the other lurking clients to get the hell out so they could lock up for the night.

I've only been to a couple: one in NC and another that didn't have any records so I did not post about it (don't even remember the city at this point).  The trick is this, people: these facilities will often not even appear in your Google Maps searches for 'thrift store' or 'resale store'.  They are listed under 'outlet store' and while I am not certain I agree with that name, the meaning is the same: these places sell in bulk.  They have giant bins on wheels about 8' long filled with all manner of things, but most often clothing.  They actually have scales at check out and sell clothes by the pound.  Nothing is labeled, you have to dig around through the busted DVD players and someone's old undies to see if you can unearth some ratty old vinyl.  In North Carolina, I actually hit it big - I grabbed a couple 45s and also an LP that I have since found again, but at that time never before. 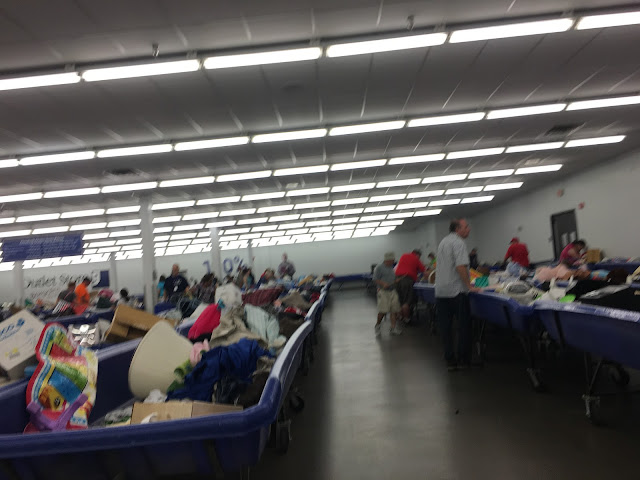 It was literally in the last row, back of the store, opposite the entrance that I found the stash.  At first, I only saw some VHS tapes but my vinyl intuition tells me that that is usually where the books and records and located.  I was (as usual) correct.  It was a mere two half filled tubs, but I'll take it. 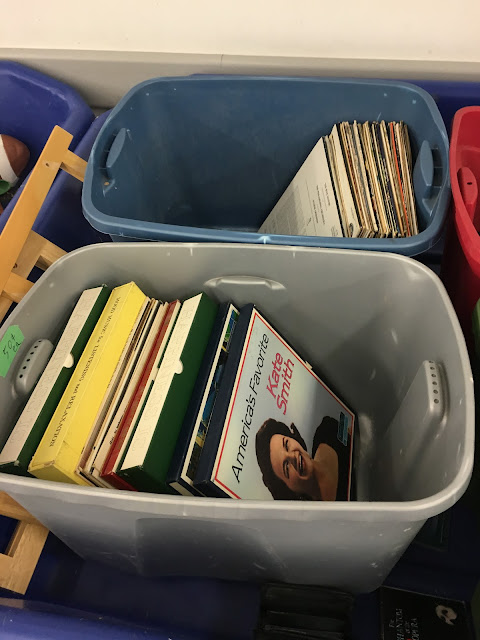 As expected, they were riddled with junk.  But wait - what is this? a 5xLP Longines Symphonette boxset of Herb Alpert? I already have every A&M release through the mid 70s, but I have no problem adding this mint condition set, replete with all the original documentation inside.  The records even looked unplayed! I drug it to the counter for checkout and the clerk started at it, tossing it over and over in her hands and started to try to slide the records out when I realized the source of her confusion.  I said "it's a record" and she replied with a simple 'ah' before she rang me up for $1.  I was nervous that had she realized that this was actually five records she would charge me $5, or perhaps hold up the entire sale as it would then perhaps not mesh with the concrete rules for pricing that the Goodwill organization had posted on the wall: 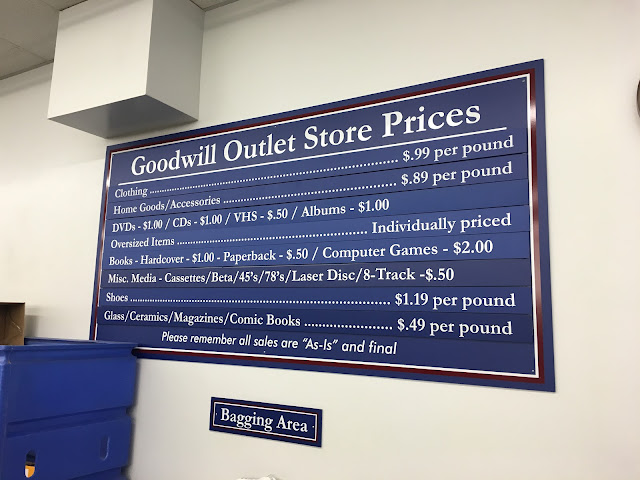 After that, I stepped back outside and checked the time.  Now everything seemed to be closed, which was a shame since I was full of energy and eager to ride my new bike to hell and back in search of more platters.  I scanned through the map yet again and besides the many that just locked up at 6, others were about to at 6:30 or 7:00, and others still closed entirely on Monday.  I began to prepare myself for the contingency that this visit may be my only one.  Then I found Bethesda Thrift about 3 miles north, where I scored a nice barbershop record before.  My visits since were unfruitful but at least they were open.  I was off!

The first thing that alarmed me was that the magazine rack of vinyl was gone! Oh no - had they aborted the sale of vinyl altogether? But as I approached I saw that where it once stood was a table filled with vinyl in all sorts of different containers, with more on the floor beneath! Good God! 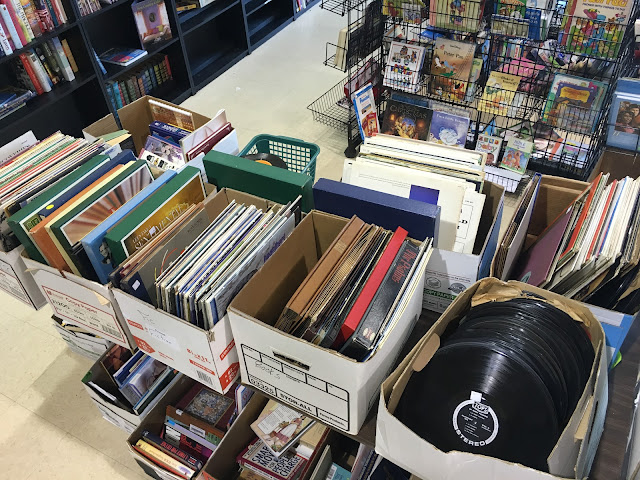 When that led me nowhere besides a visit with Mantovani and friends, I figured I'd briefly glance at the books when I found the relocated magazine rack, with yet more records! Here I found one worthy of note, and I hold just a hint of remorse for letting it go.  I already know that I have the best Jack Jones LP available (courtesy a very kind Santa this past year) but this might be a close second for the opener/closer.  I am very curious to hear it...but I decided I could do that via other methods that did not involve adding another record to the landfill which is my collection.  I'm listening now on YouTube and while I dig the tropical vibe lended by the guitar, but his voice is a bit thin in comparison to Engelbert's.  But I already knew that even the best pale when contrasted - it isn't easy to top the king!

Email ThisBlogThis!Share to TwitterShare to FacebookShare to Pinterest
Labels: appleton, out of state, thrift store, wisconsin