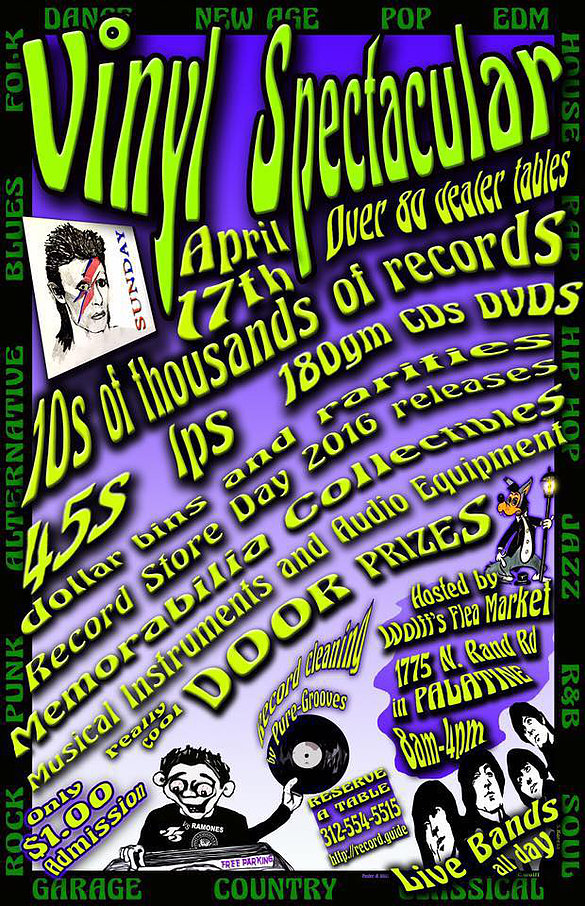 I was approached by the people that put this together who asked if I would put together a seminar regarding record bin construction, a topic I have covered here at length.  At first I modestly assumed that it must be some kind of prank - who would legitimately consider me enough of an 'expert' to give my opinion on the matter? Well turns out someone did, so I followed through and made it happen!

After racking my brain on what I could possibly use as a visual aid in lieu of a PowerPoint (something I perhaps have learned to use as a crutch after giving too many presentations at work) and eventually came up with what I call my 'joint tree' - it demonstrates three different ways to anchor your shelves within your build, in both 2x4 and 2x6. 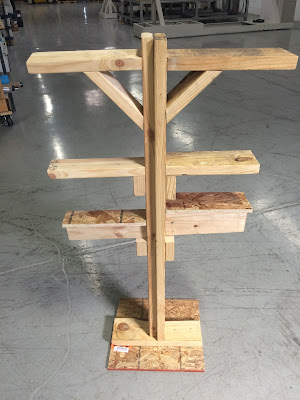 I celebrated my birthday for a while and my girlfriend got me something really intersting.  I had seen commercials on TV a bunch of times and she picked up on my obvious desire for the device.  It is made by a company called Kreg and it is a simple jig that you use with a C-clamp and a drill to put 'pocket holes' in boards.  It is difficult to explain better than that but the below pic should help. 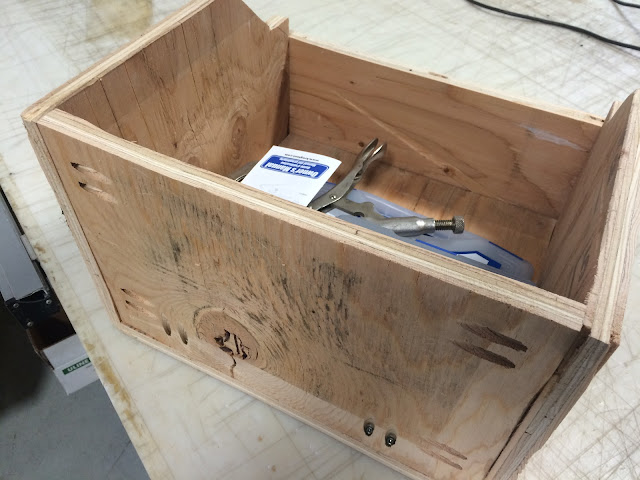 I had the kit for a few weeks but never made time to take a close look at how it worked.  So I thought that it would be a good point to touch on, something to discuss for people who are maybe thinking about building something but aren't quite sure what they want to do.  So I thought I'd throw together 3 boards, just a 'corner' perhaps, to illustrate how the screws are hidden and how strong it is.  But once I got the hang of the kit, I couldn't stop so I quickly put together the box!  I decided to take it a step further and stain it instead of paint it and it came out really nicely.  This was only a single $9 piece of 3/4" CDX plywood and it took me about 30 minutes to cut and assemble.  I could do a lot better but I could also do a lot worse! 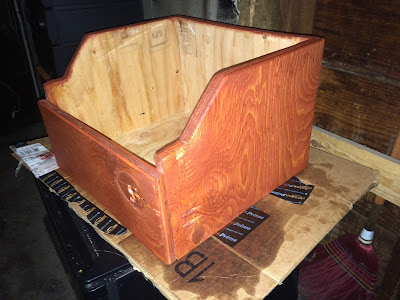 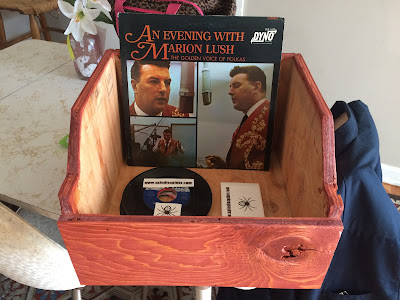 I figured I should have something to hand out to help promote the site so I went and got some cheap 7" records and put some simple labels on them with the domain name and logo.  You can see them in the box above.

At the 25th hour, I got the word that there WOULD be a projector and laptop available - so I had just the day before to assemble my presentation.  I am pretty happy with it - you can see it here.

So Sunday morning with my 'business cards', LP crate, 'joint tree', power and presentation, I took the early (for a Sunday) drive out to Palatine.  The event was at Wolff's Flea Market and the market was up and running as always, the record fair was tucked away in a back corner of the facility.  I wanted to get there early enough to catch the first speaker, Nick.  His presentation exceeded my expectations on what kind of material he might cover - very interesting.  But almost as interesting was the fellow who sat next to me, also quietly listening - and eating a bag full of cucumbers! 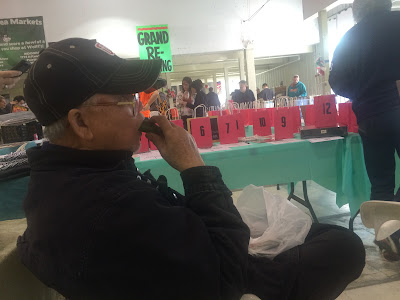 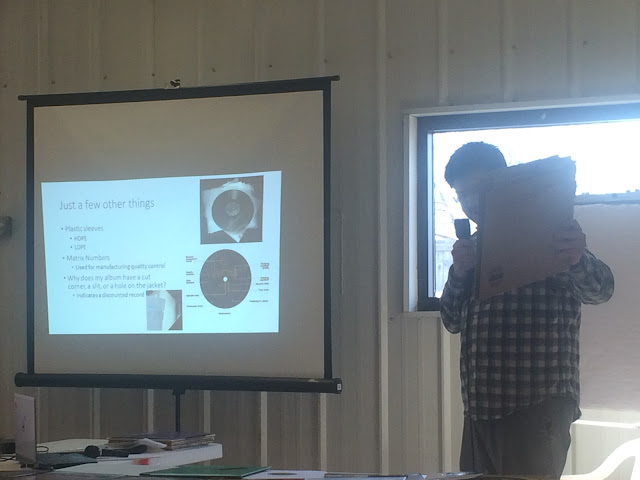 I was so fired up and ready to go I could hardly wait.  I congratulated Nick on his excellent seminar then spent the next 30 minutes or so trying to dig some vinyl of my own, before it was my turn to take the stage. 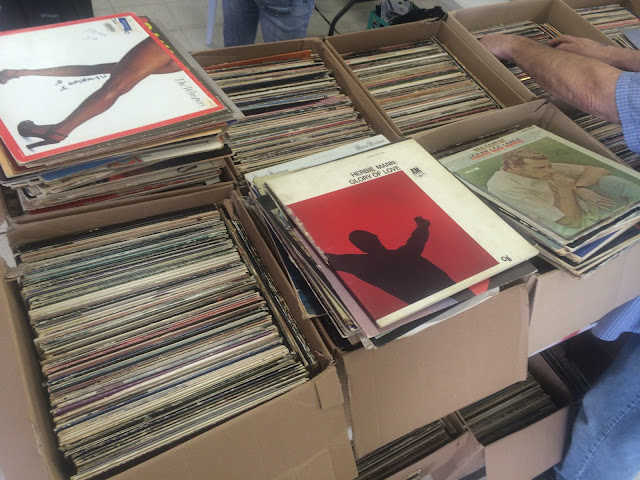 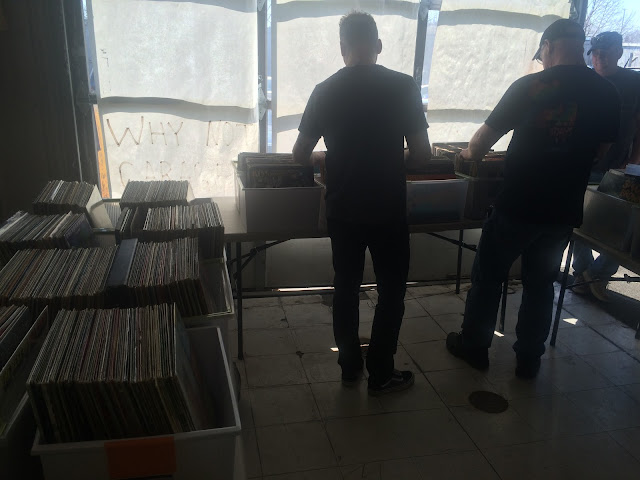 Well it was time to go and of course it was a blur.  I know I enjoyed being up there and I had some nice chats with folks afterwards and a few people seemed to like it too.  It was just really nice to be validated for 30 minutes out of the over two years I've been writing, and well over a decade that I've been collecting. 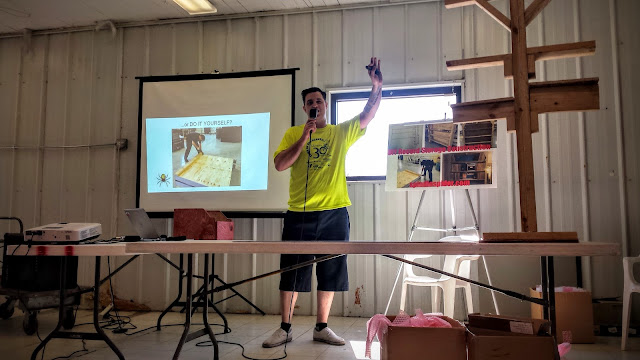 So I went to head out afterwards and said my goodbye to Chris who has invited me.  I thanked him profusely and offered him the box as payment after he had mentioned how much he liked it.  He refused to take it - but said he would buy it! I told him I'd be happy to get my $10 back which was essentially what I spent on materials.  I will enjoy building another and I can do better (this was basically just a prototype), so unloading it for a few bucks was a bonus.  Then he took it a step further and offered me a Vinyl Spectacular 'Crew' T-shirt! Totally gracious offer which I readily accepted.  But he wasn't done!

As I was walking out he asked if I had found any good vinyl.  I actually had not - I was pretty tired and hungover and really just wanted to get some breakfast.  And honestly, I get kind of overwhelmed at these things, when I see that much vinyl I kind of blank out everything I am looking for and become a zombie.  Well he took his new box and walked over to a table full of vinyl (apparently he was a vendor as well), and dumped the contents of a cardboard box into my box, and put it on display! Then he told the girls behind the table that I had $20 credit to take whatever I wanted! Hell, I was just happy to be asked to speak - all these gifts, it was almost too much! I swiftly found a Blue Note classic for $10 and decided to call it a day.

It was really awesome to get to chat with people and hang out - I guess I realize that I make this too much of a solitary endevour and there is a whole world out there of like minded individuals who aren't elite, and are just like me.  It was a privilege to get to speak and the gifts I received were just totally unexpected and so appreciated.  What an excellent day! 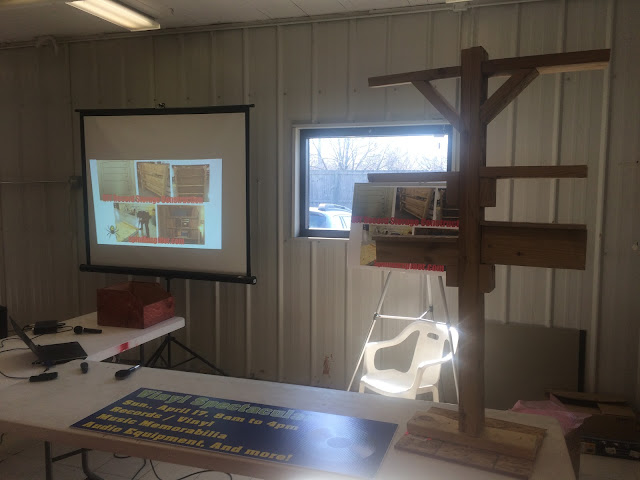 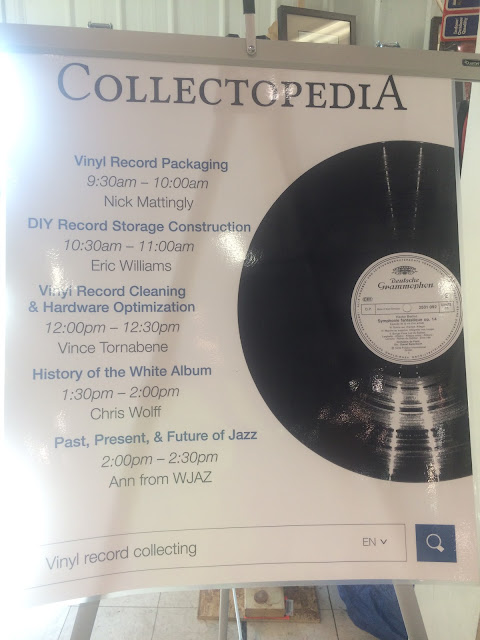 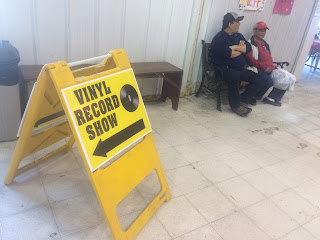 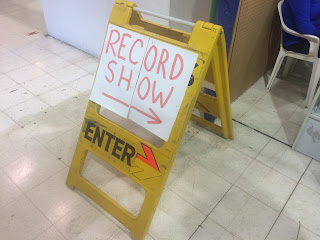 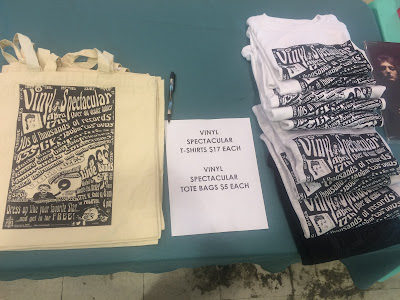