The struggle is real, believe me.  Besides the thousands of hours I have spent during fruitless visits to dirty old thrift stores, I spend a lot of time on the phone assuring that the places I visit have vinyl before I head in that direction.

Below is a rare text exchange between myself and somehow who is apparently the proprietor of a thrift store in Wausau Wisconsin.  I tried to plot my course to hit a spot on my way up and this was conveniently located.  There was no number listed but I found it with minimal effort on their Facebook page.  I called a couple times, there was a mumbled voice mail greeting which I could not interpret and I left no message.  My two calls were a few hours apart and after the second one I lost interest with all the other spots in Wausau.  I called at 9:05am in the driveway before I left Chicago and again at 11:42am when I was about to roll into town.  You can see this started hours later, I was ironically in another local thrift store when I received the first message. 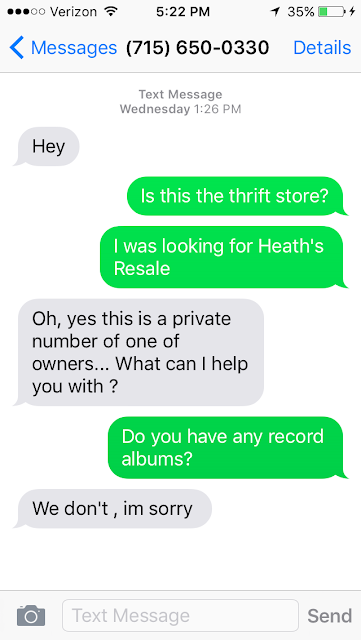 I post this mainly because I am amused at the 'this is a private number' part.  As if I am infringing on people's privacy.  Again, this is clearly listed - quite publicly - on their Facebook page which I refuse to share and help promote.  Who begins a text conversation with a random missed call, and begins it with 'hey'?