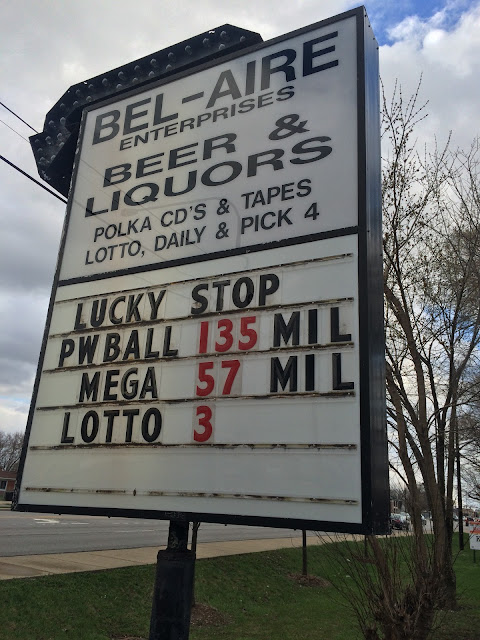 It is not difficult to recall when I first learned of Bel Aire Records.  It was at a garage sale, now over 18 months ago.  There weren't many records but there was on that caught my eye, and it was sealed.

I saw it was a local label and it took me a moment to determine what style of music this was.  But it was that cover photo - of Eddie Blazonczyk and Chet Kowalkowski - standing somewhere, probably on the south side, waving in such a welcoming way to the camera -- and to me.  I left the record behind but when I got home I sat down to try and figure out what the heck that album was all about.  Who were these guys? Something was so intriguing, and that photo just rang in my brain.  They seemed to be saying 'come on it!', they were waving hello, but they were also beckoning me closer, to join them in whatever they were doing, and it sure seemed to be fun.

Bel Aire was the premiere Chicago polka label for decades, starting in the mid 60s.  Some may find insult in the comparison, but Eddie Blazonczyk was truly the Master P of polka.  The business model is identical: keep the releases coming from a few artists you nurture and keep your own material coming regularly at all times.  People throw around the word 'prolific' but how about 38 full length LPs? That doesn't count the CDs that came after in the early 90s.

So after I left that Christmas album behind, I moved on hunting elsewhere as I always do for interesting vinyl.  And I kept researching the genre: the major players, the labels, the styles, the regional differences. And before long, I came across two more, and I grabbed them both.

More followed over the next year and as I always do, I started to get emotionally attached to the people and the era.  I read and I read and of course, I listened.  The collection continued to grow and as a testament to the popularity of Eddie B., I even found another LP up in Albany. In the meantime I added a whopping 55 Bel Aire releases to discogs.com.

I knew that the original base of operations for Bel Aire was on 47th Street but that things moved to the southwest suburbs sometime in the 80s.  So just a couple weeks ago while I was fooling around in Google Maps I found that Bel Aire was on the map! Even more insane, it was listed as a 'record store'.  But when I zoomed in on Google Street view, it looked like a liquor store! And if it was either one, was this actually the building that the studio recorded so many Bel Aire albums in the late 80s and early 90s? Could this be? I had perused the site many times before and this time I went ahead and hit the 'contact' button. And just a short time later, I got a response:

I noticed a while ago that Bel Aire was selling what had to be old overstock on vinyl for only $2 an LP! But I never pulled the trigger because it would only suck the fun out of the times I might come across one in a thrift store. But if I could get them direct from the label, in their own facility - the sky is the limit! I'd buy everything they had.

That weekend came and all week I had been thinking about driving down to Bridgeview to see what I would find.  My girlfriend had come down with a cold and she was planning to come - and I needed her car to get there - but she could surely see the childlike excitement in my eyes and threw me the keys and told me to have fun.  I was off!

When I arrived, the store was empty save for a gentlemen chatting with the cashier.  I saw the beer coolers in the back of the store but I was after vinyl.  I spotted some CDs and headed into the corner.  For a second I couldn't see the forest for the trees and panicked.  Then....there they were. 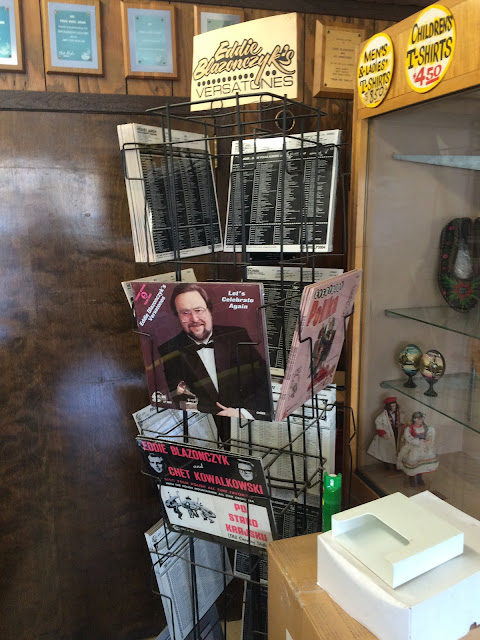 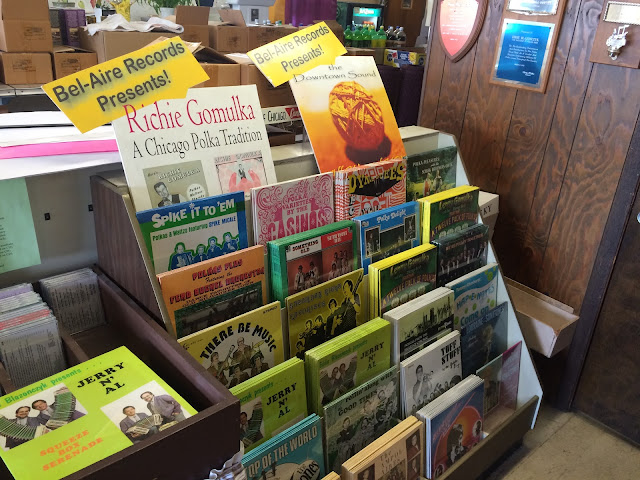 I was overwhelmed but I tried to clear my head and start inspecting.  It was all sealed and I knew some had to be 15 years old, maybe older.  Some of the record I could date as 30 years old but I can only figure they are reissues.  My first selection is viable in the picture above, set aside on a CD bin.  I know enough to understand Jerry Darlak's contributions to the genre and his influence in the Chicago groups he performed with.  Sadly, we have lost him like so many others seen on the album covers here.  This album has been truly delightful, it is instrumental and I can't help but smile at the visual of big Eddie behind the trap kit on side A.  At one point the cashier broke off her conversation (it did seem to be one sided the the gentlemen on the other side of the counter dug deep into politics and the like) to ask if I needed anything.  I giant grin came over my face and I said "oh, I found it".  In the rotating rack I grabbed two more.  One I have missed on narrowly twice in the past 6 months or less, the other I have listened to at least 5 or 6 times all the way through already and it is just good, comfortable, straight ahead polka as I know it.  And having performed myself for over 10 years, I think the cover photo is truly great and really captures what being on a stage is like.

Happy with three LPs for now, I headed to the back to get some brews.  It was Saturday night and I looked forward to sitting on the floor of my girlfriend's basement listening to my virgin vinyl and drinking some ice cold beer.  I grabbed a 12 pack of Grolsch (fitting polka beer, I thought) and went to check out.

The cashier smiled and we agreed that some polka music and beer were the makings of an excellent party.  The gentlemen who was still hanging out argued that 12 beers couldn't possibly be enough for much of a party.  The cashier countered that perhaps some vodka would even the score and I added that the 12 pack was for me - BYOB at this polka party.

As I went to check out I noticed something odd - a cat sitting contentedly, watching me from it's perch, looked down upon by none other than the pope! The cashier said that Kiszka (if I remember correctly) was the 'queen' of the shop and you'll hear no argument from me.  That cat was so relaxed it barely budged even as I snapped this egregious photo.

The cat gazed down at me, hardly caring.  The pope watched the cat, and maybe Eddie watched us all.  I just got done with one album and a beer and a half while I wrote the above, and I just started another.  I'll be back to Bel Aire before long but in the meantime I'll do the only thing I can to keep this music alive - listen to it, and feel it.  And it feels good. 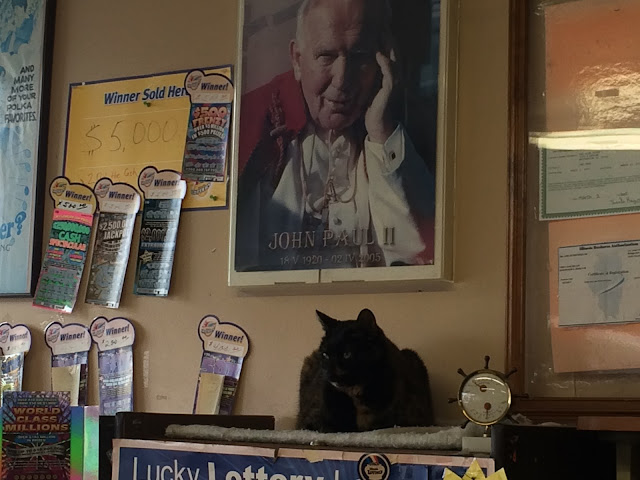 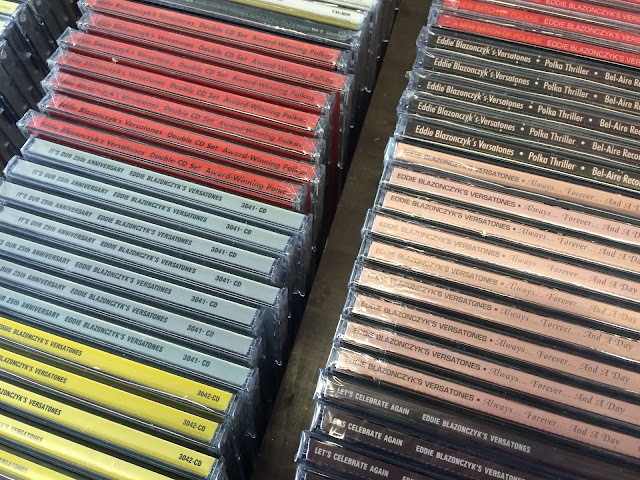