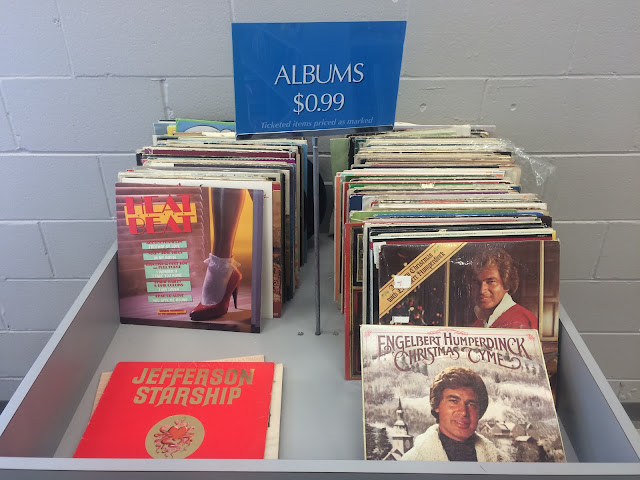 Still the cleanest record bin in the game - I think this is only my second time ever stopping in.  Went way over here to visit a Walmart to pick up some odds and ends and strolled over.  Found the red album lower left and one other one instantly in the front of the stack and knew I was off to the races.  Saw a Sade album I already have and both Eng Xmas albums (not counting the one I still want and need and may NEVER FIND!).  I sort of regret not buying the 80s comp seen upper right for track A1 but I think I can live without it...somehow.

The Jefferson Starship album I saw recently at St. V's 'in the case' (an update on that below) and apparently it sold because it's no longer there.  I only want it for one track but the whole thing looks pretty beat up.  I was able to get some scuffs out with alcohol and a lint free rag and it plays perfect - same goes for the Carly Simon which was in similar condition.  But that's not all! I also found a barbershop score - home town boys (Des Plaines) and 1988 International Champs.  But to make things really weird, I instantly felt there were two LPs jammed in the sleeve.  This is commonplace in thrift stores - you never know what's in there.  In this case, truly odd, there were TWO copies of the album.  Very strange indeed.  HUGE scores today.

Afterwards we swung by St. V's as it is on Lake St. on the way home.  I donated at least 40 records a few months ago and periodically I'd see my stuff pop up in the bin.  Today there was a huge load of my old vinyl and I had a few laughs as I took a look through them.

A while back I scored two Engelbert concert programs at a WI thrift store.  Now a couple of months later I misplaced it, I couldn't find it.  I tore the house apart...I swore I had tucked it in with the album it came with, but it wasn't there.  Well today I noticed the duplicate of that - I had donated one - and alas, I had given away the copy which had the program in it! So I had to buy it back.  Funnier still was that once again, St. V's had put some vinyl in the locked case which they obviously think has some special value.  Again - one of mine.  I scored it for a buck I think and if it had any value (it doesn't), than I would have put it up for sale with the rest of my inventory on discogs.  Not sure why I bought it and I never listened to it even once.

Anyway, Addison Goodwill continues to provide some scores.  I'll be sure to check back again in a month or two.

New To You, Broadview 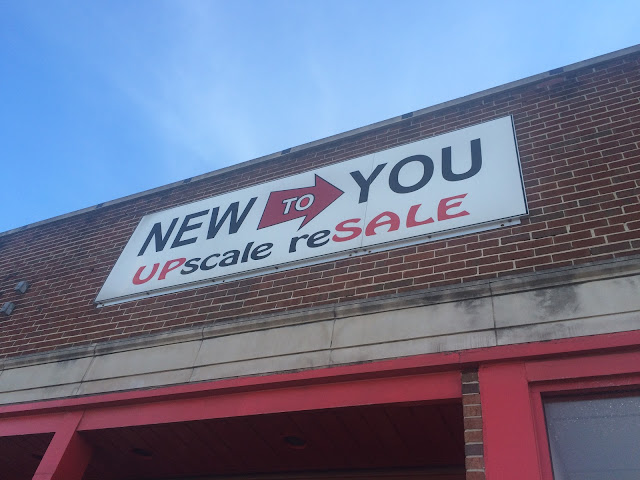 The well long ago ran dry on thrift stores anywhere in the vicinity which I have not visited and blogged about.  But occasionally I find one which I overlooked and of course make a bee line to dig through their filthy old vinyl!  I reached New To You with my girlfriend and her daughter in tow just moments before they closed, after we dilly dallied the day away (isn't that what you are supposed to do on a weekend?). Unfortunately they had nothing worthy of note and nothing to offer, but as I always proclaim: well worth the trip.  I don't need any more records anyway, I just like to play with them, like a small child with blocks. 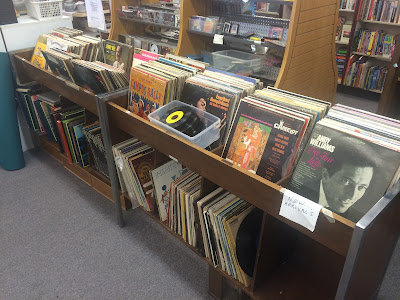 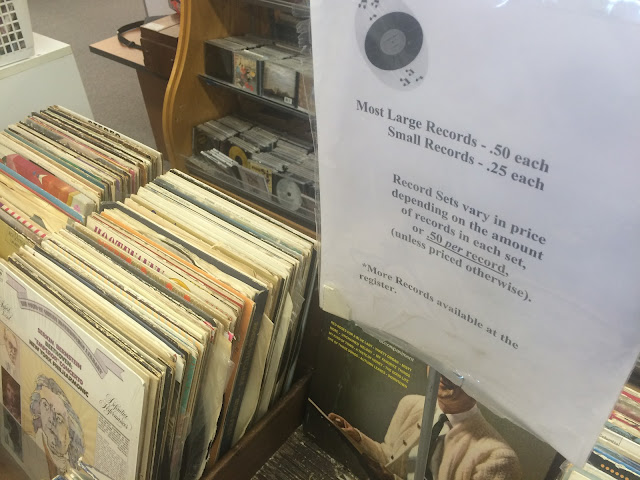 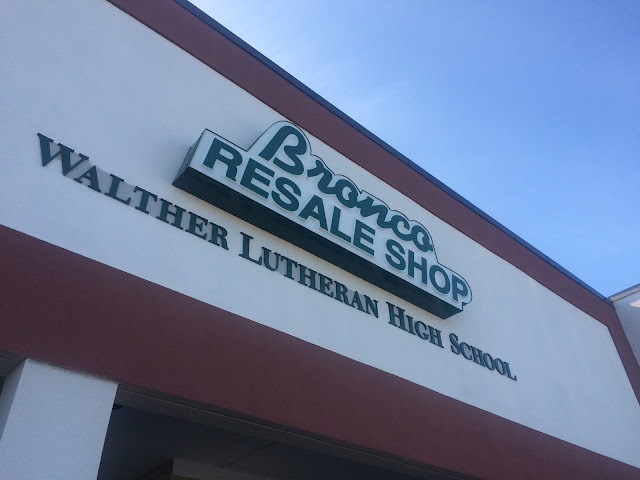 I have had my eye on this place for a long time but never made the trip.  On an unseasonably warm weekend, I made the bike ride from Elmhurst out to Berkeley and back.  I was rewarded for my work!

Google maps has some misinformation which I have pending fixes already submitted on.  It has two seperate entities listed for the same address: Bronco Resale and Walter Lutheran Thrift Store but as you can see on the sign above, they are one in the same.  I called in advance as I often do to make sure they had records and did they ever! 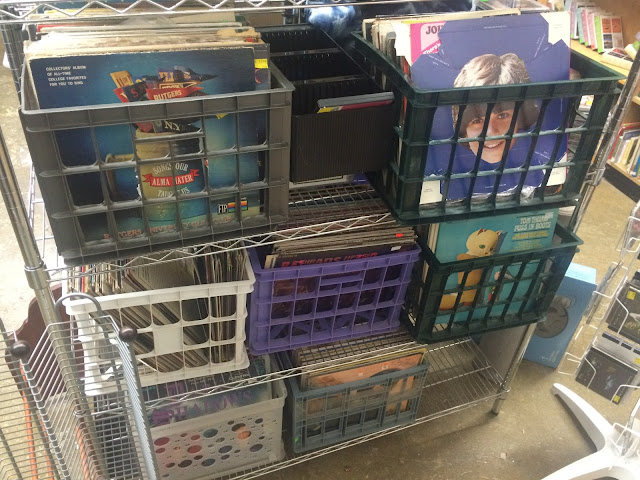 I pulled out not one but two barbershop albums - one of which was still sealed! First up was a record I would normally not be interested in.  Barbershop choruses and regional competitions both fall outside the realm of my obsession.  However this album has an appearance from the 72 champs on four tracks and as previously alluded to, was sealed! It was not in the discogs database so of course I took great glee in adding it.  Then I found a previously undocumented album from the international champs a scant 21 years previous! Quartets predating approximately the mid 60s generally don't tickle my fancy either but this one had a brochure stuffed in it advertising two other LPs, one of which I have. So I had to have this as well.  I also spotted a bunch of Engelbert records and while of course I already had all of them, one had an interesting POS sticker.  I have fallen victim to the allures of such things previously (at Dodds).  This one was not enticing enough but indeed interesting: I was aware that the LP was essentially a bit of promo for the show (the font of the album title, specifically) but never saw it spelled out as such before. 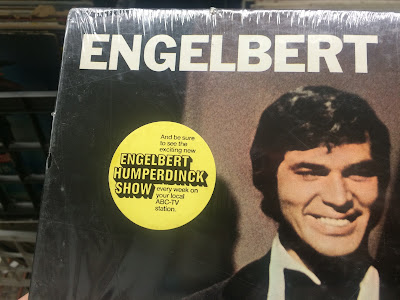 All in all a nice place in a convenient location to which I shall certainly return! 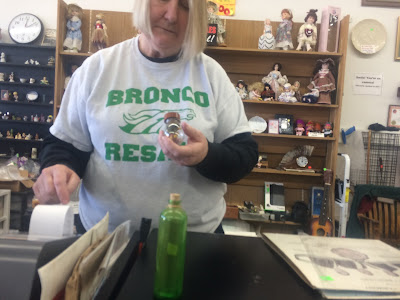 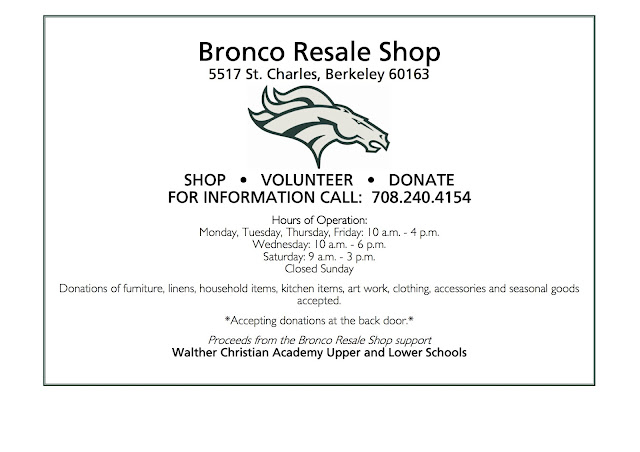