I check the pitiful stats on my blog regularly so that I can feel a mix of disappointment and disgust that about 25% of my all-time page views are based in Russia and the only referrers are from google searches.  Never a mention in another blog, a facebook post...nothing.  Until now!

Looks like a bunch of people on a message board got to bitching about the sad state of Chicago vinyl (more on that below) and fittingly, my blog came up.  I registered to post my responses in the thread but its been over a day and they still have not 'approved' me to post.  I'd be willing to wait but the thread has also now been dead for a couple weeks and no one appreciates bumping an old topic anyway.  So I'll respond here, where I am protected from cruelty and rudeness!

Well for the record, I don't just go to thrift stores.  But I appreciate someone recognizing the passion I have in the context of people complaining, where I could be complained about just as much.  I wish I could say that I only started collecting Engelbert records because that was all I would come across so I threw in the towel and decided I better collect what I had access to.  Not true - but no matter. 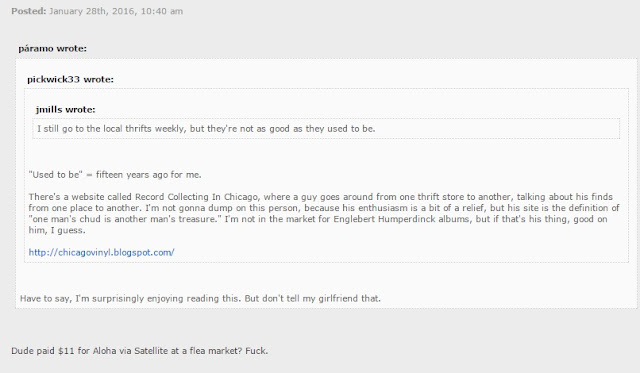 Yes, I did.  But worse yet, the record looks like someone did some mafia style tortures on it with a pliers and a blowtorch.  And it wasn't a flea market, it was an antique mall.  Not sure how someone new to the blog got started with a post that old.  That was a fun day though. 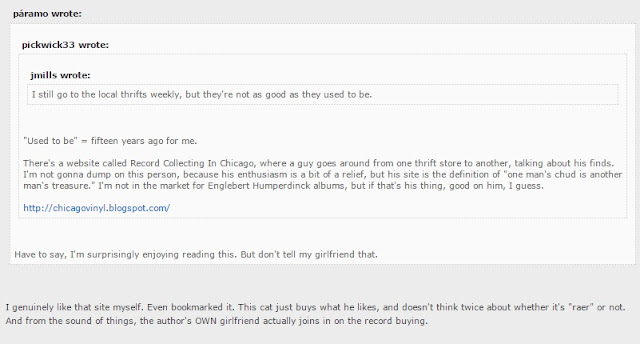 Well that sums it up pretty well.  The issue here is that I don't have any friends or people to chat about my records with.  Worse yet, my tastes lean towards artists and titles that happen to hold little rarity.  So little of what I collect or purchase has any value.  And yes, my girlfriend does collect records and while I may have pushed that interest along a bit, I'd say she is an independent entity and not just tagging along to 'support her man'.

So thanks everybody for the props and for reading in general even if you disliked it.  But I am astounded by the negativity towards an entire city.  That doesn't mean I'll defend it necessarily, but I didn't know that the fun of the hobby/obsession was supposed to solely come from your scores.  And I've echoed that again and again at the end of the many posts where I came up empty handed, that it was worth it anyway.  Paying $11 for a record I could get for $3 on discogs right now (plus have it in better condition) is obviously worthwhile - if your only purpose is to be an efficient buyer.  I don't have a rule book and I surely never had anyone else to tell me how it is supposed to go but I have fun everytime I go out.  I had a blast that day! I was by myself digging for over a solid hour and I couldn't wait to tell the tale on here.

I have dug in too many Goodwills to count, I continue to occasionally pull stuff out of there and if not, I just like being around records and leafing through bins of them.  I wish that I detected that the entire thread was a huge sarcastic joke but it doesn't seem to be.  What is the ideal record store? Where they have everything you've ever wanted for $1 each? If I wanted to just get every record my heart desired, I'd buy them all online right now.  I am not an eternal optimist but I never go out to hunt then get bitter and claim that an entire metropolis sucks.

I was on the swim team for 3 years in high school.  I did not join senior year because I wanted to drink beer and be cool and getting up early to swim before class, then practice after class, and have meets, and swim in another league in the summer - no way.  So I told the coach I wasn't going to do it and he asked why.  I said it just wasn't fun.  He had a longer response but I remember him saying 'you have to make it fun'.

The point is not to grit your teeth and do stuff you don't want to.  If it truly sucks, then bail.  But some stuff can be a lot of work with little reward so if you are doing it just for the end result, it is going to be a long time coming, and even then maybe not at all.  So I suggest you enjoy the ride, because it is going to be a long one, and the road is pretty bumpy.  Find some aspect of it then is attractive and focus on that or its a lost cause.  I don't have to remind myself of any of this, maybe I've just ingrained it into my head at this point.  But if you find yourself infinitely bitching about something you are supposed to be a practitioner of, perhaps it is time to take up stamp collecting to revive that baseball card collection from days gone by. Perhaps I am just speaking as the quiet 'loner' that I am but I believe that 'group-think' just leads to negativity and complaining.  Maybe our brains are just wired that way and looking for an excuse to go that route. So I am glad this blog and my interest in record collecting is just for me.  If anyone is losing the passion, I'd say to start doing things on their own and maybe they will get their groove back (pun intended).  Good luck.