This is my third trip to the KC area.  The first was years ago but the second was just a couple months ago.  However during that trip my time and mobility were limited.  This time, I had a full solid evening to myself with a rental car.  I was working in Independance but I was staying out towards the airport for a swift trip in the morning.

When I was driving to the job site, I drove right past Thrift World.  I considered ducking in before I even went to work but decided that would be cheap - it should be a reward.  So as soon as I was done, I headed over.  I did a full roundabout of the entire shop before I found the records but there were some gems. 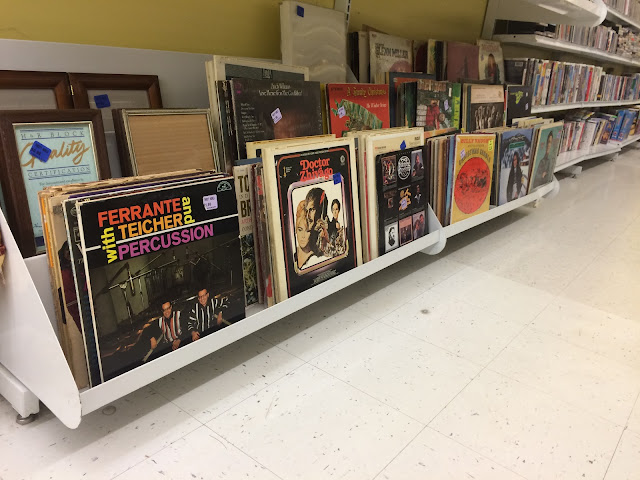 The Dave Mason album is surely not common thrift store fodder but it was someone's abandoned jazz platters that really caught my attention.  I have both - but this is high quality stuff you just don't see laying around for a buck.  Neither is valuable but someone sure had good taste in music! I have way too much Herbie Mann - more than I listen to - but this one I have spun a few times to good results.  I am positively a PMG freak and while their debut isn't my favorite you never come across this outside a record store.  I bought nothing but it is nice to flip through some good stuff for once. 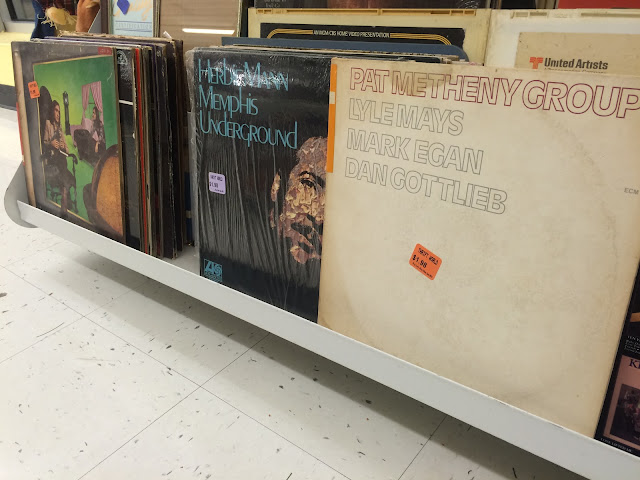 Next up was Frugal's Thrift.  Just a couple miles away in a dark and almost desolate end of a strip mall.  It was getting later now so I called to make sure they were open and make sure they had records.  I got the green light on both questions so I headed over. 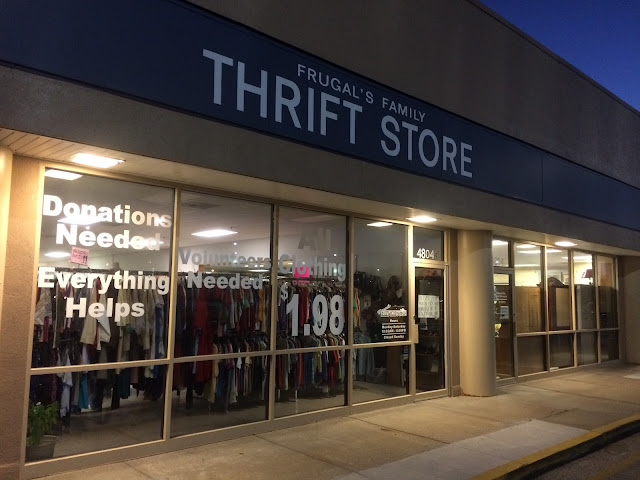 Somehow I forgot to take a picture of the rack but they had a substantial amount of records.  They were lodged in a big bookshelf with 12"x12" cubes, they were stored vertically but as the bins were so short laterally you had to kind of look around a corner.  I kept finding more and more Eng - even the albums you just don't see very often: In Time, UK reissue of the live album (which I just got recently) and My Love.  I have all of those but what I do not have is the UK import of the 'Sings For You' compilation - how this gem found it's way to Missouri I shall never know but it made it home with me safe and sounds and I am delighted! 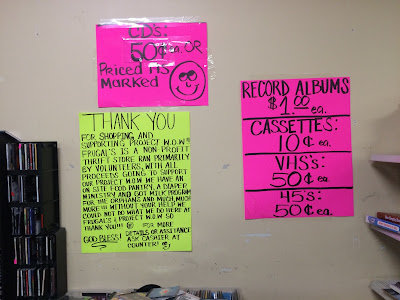 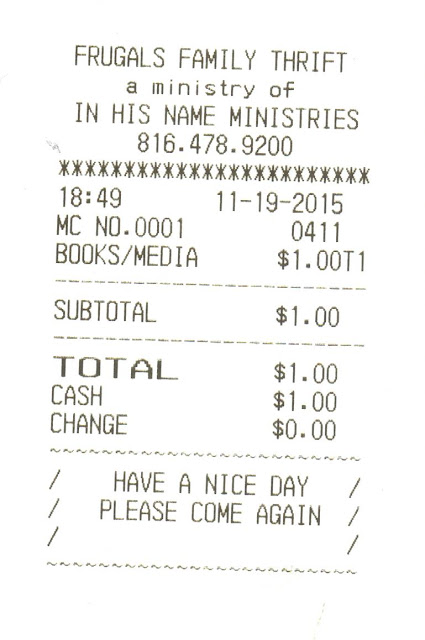 At this point I had my prize and was content to call it a night.  I had at least a 30 minute drive to get back to my hotel and I was getting hungry.  I decided I could not hold out so I made a note to stop at a 7-11 if I saw one to grab some beer and a sandwich to munch on as I drove.  Not five minutes from Frugal's, I blew right by yet another thrift store! I was so torn trying to decide if I should stop or not...but I decided not to swerve into the lot and to just keep on going.  However, my 7-11 was not 1/4 mile beyond.  So I stopped there and as I ate a chicken salad sandwich in the car (stale bread on top, mushy bread on bottom) washed down with the other half of a bottle of water I had bought 7 hours before, I decided I had to go back. 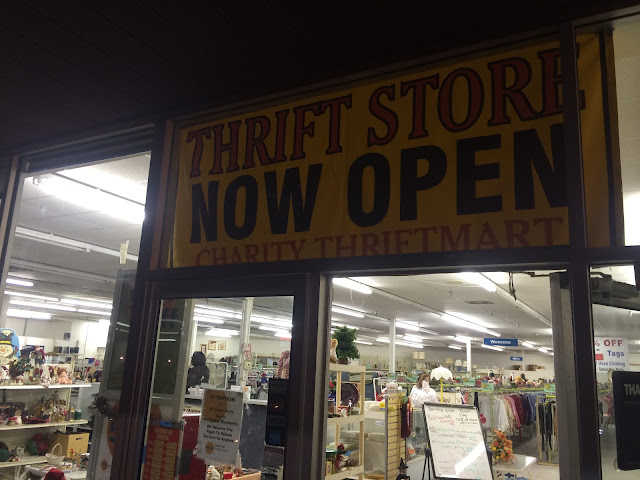 Charity Thriftmart is a big place and once again I seemed to encounter the records last on my circuit through the shop.  I found a Goodwill style bin plus 4 long bins on the floor below - hundreds of records! And I knew I was off to a good start when laying right square on top were two 45s of great relevance to my interests: a picture sleeve for 'Evergreen' and a Deodato single.  I must admit to not remembering what the Deodato single was and as it was in a Columbia sleeve my OCD rejected any notion of it's purchase.  But allow me for a moment to extol Barbara's work on this song and film.

When I was a kid my mom used to play Barbara Streisand around the house - I hated it.  Zero interest.  I don't remember why I decided to seek out 'A Star Is Born' (the film, that is) a few years back but I loved it.  It is so maligned I think as every thrift store has a beat up copy - it must be a piece of junk, right? But the film is just excellent, I find myself when I watch it feeling sorry for Kris Kristofferson's character and even feeling bad for condescending to him when I remember that it's just a story.  He has the look and mannerisms of someone so beat down by life, so pathetic that he is just counting the day's until he can 'punch out', even trying to expedite things by self destruction.  Barbara on the other hand is at her prime and so attractive that I am stunned constantly by her.  I read somewhere that she only wears her own wardrobe in the film and her outfits are amazing.  And if you want to look past the story and the acting, you can focus on the music.  And it is excellent! I actually dubbed the version of 'Evergreen' from the film into an mp3 as it is performed 'live' for the film and is not a lip sync studio track.  So I do indeed have the LP soundtrack on vinyl which I purchased on eBay years before I used to root around in filthy thrift stores and I have listened to it many times.  I have never come across this picture sleeve, but then again I often ignore 7" records altogether.  Unfortunately, the A-side has a series of what may be intentional scratches rendering it largely unplayable but as my girlfriend noted last night, it will be much easier to find a replacement 45 then another intact copy of the sleeve.

But alas, the long paragraph penned above which drips of excitement at the release I found laying atop everything else is just the beginning! Because as I searched I found not one but two additional releases which I bought reflexively, without any hint of trepidation or analysis.  If you could look over my shoulder (silently, please) as I hunted in these places you'd hear the sound I make when I find a barbershop record.  I think it is something like a whispered 'whoa' but I am not sure as I can't control it.  That sound was audible in this corner of the world when I found my fourth Suntones album.  I am already disappointed with the eponymous medley on side B; I am so accustomed to the version I know and love that I can find no comparison, even from such a historically important quartet.  However, their rendition of the David Gates classic on track B2 makes up for it.  I often feel 'cheap' enjoying barbershop arrangements of pop songs as usually they are bereft of anything technical.  I do not require 7th chords and other tricks to entertain me but I question why I like the song: because I love the original? Or something else? Then I remind myself that four voices that well in tune with one another is quite an accomplishment in itself. The late great Gene Cokeroft does not struggle even one iota with the soaring falsettos Gates laid so carefully into his composition.

Then I found an excellent record in some excellent packaging.  Harry Chapin's second album comes in a die cut gatefold - the die cut goes all the way through the front half of the front flap and then contains a 'folio' with all the lyrics and some excellent glossy, color pics.  I did a small repair job with some scotch tape as the die cut had gotten its flap caught on another junk record in the bins during its travels - excited to report that the vinyl itself is pristine. 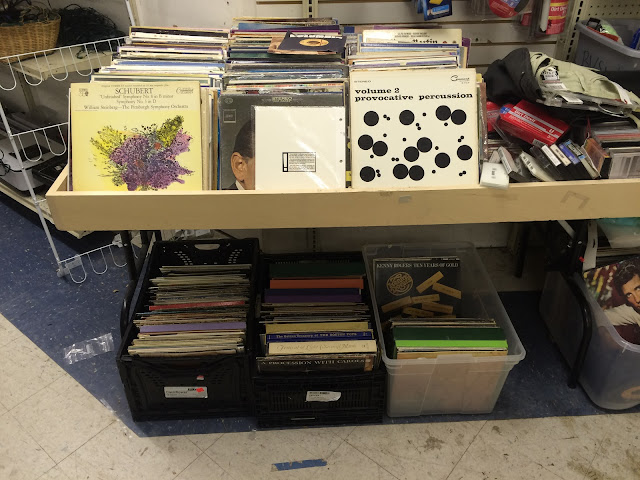 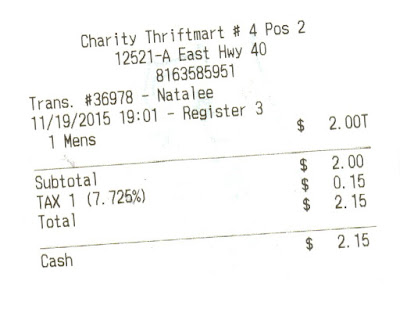 $2.15 for these three excellent records (even if one is damaged) is highway robbery.  But my wonderful cashier let me 'keep the change' and just gave me $3 back on a fin.  Insanity! Then she told me of an upcoming sale and stamped the back of the receipt with the date of said sale in case I forgot.  What service! A great way to close out my hunts for the night and my trifecta of KC area shops! 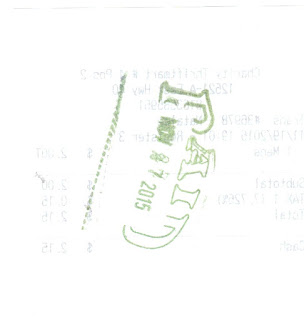 I made the first ever post on this blog exactly two years ago.  When I started, I saw a very finite life to things...I figured I'd hit every single record store in Chicago and maybe beyond, post about them all like a checklist and be done.  But then I got thrift store mania...started going to garage sales, started going out of state....time flies and I am far from done - it never ends.  Stay tuned for much, much more!

Email ThisBlogThis!Share to TwitterShare to FacebookShare to Pinterest
Labels: missouri, out of state, thrift store