A year and a half ago, I was out in McComb Ohio and I stopped at a tiny thrift store where I examined some records.  After paying for my scores, I chatted with the elderly woman behind the counter who told me fantastical claims about the person that stocks the records there on consignment: "he has a barn full of records....the barn even has an elevator....he has 100,000 records".  Not clear on the accuracy of her tales, but unwilling to risk the chance that they might be true and I'd miss my shot at this mythical 'barn', I left my name and number to pass onto the mystery man.

I got a call from him a short time later...I met him the next time I went to McComb about a year ago and I saw the barn.  Turns out, what the lady told me was largely quite true. But there was more than a barn...there was a garage 100' away also stocked with vinyl to the ceiling.  But Terry (the propietor of this empire) told me had yet more records, in a storage facility in nearby Findlay.  I told him I'd stay in touch and let him know when I'd be back around his way.

That time came, almost exactly a year later.  And we met up in Findlay, and I saw his records and it was epic.

I never had so much trouble trying to figure out how to photograph everything, it doesn't do it justice and it doesn't really illustrate how many records were in there.  Here is some very rough math I came up with:

And as you can see, there are two racks with an aisle between them, so that is a gross (144) of boxes.

Terry claimed that he could get 100 records in each box, but I'll be a bit more conservative and say there are 75 in each - that would be 10,800 records.  Even if there are only 50, that is still 7200.  He told me he used french fry boxes because they are free and you can get them at any fast food resturant - imagine how many boxes of fries McDonalds uses in a day? And they must be like 12 1/4" wide - they are almost exactly the right size to just barely squeeze records in there without damaging them of stuffing them in.

And whatever estimate I can come up with that does not include the numerous Rubbermaid tubs in the aisle or the long wooden boxes on the lowest shelf.  And up at the top were loads of 7".  He told me he had just sold "30,000 45s".  Again - if it was anyone else, I likely would call BS, but if you saw what I saw in that barn a year ago, and in this storage space this week...or even maybe just these pics, you know it is quite possible. 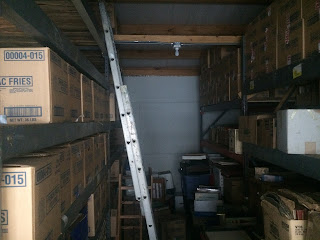 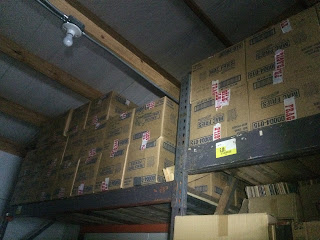 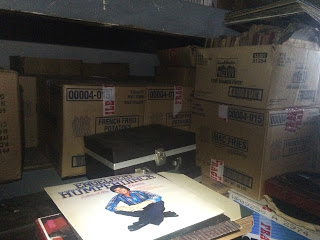 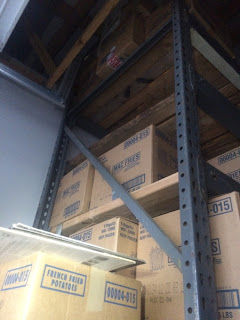 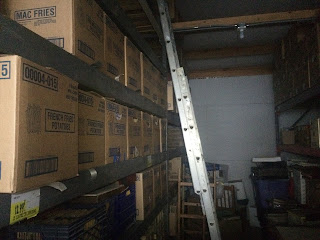 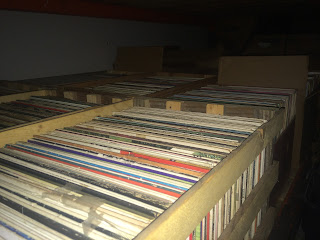 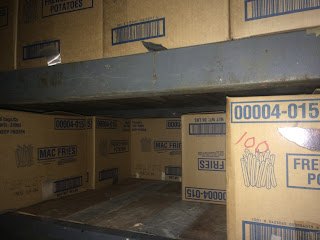 Ray Price - Love Life - one day I'll stop buying every Ray Price album I see.  Currently up to 19 combined LP/7".  This one is mono.
The 5th Dimension* - Up, Up And Away - This completes their first 8 albums for me, that collection is now complete.
Jimmy Smith - Who's Afraid Of Virginia Woolf? - this one is a little dog eared with some ring wear but I'll grab just about any Verve stuff I can find (especially if its mono)
Woodstock - Music From The Original Soundtrack And More - I am really looking forward to cranking up 'I'm Going Home'
The Dave Brubeck Quartet - Bossa Nova U.S.A. - the only Dave Brubeck I ever seem to come across has been to hell and back.  I suppose that's because if it was in decent shape and a decent record, it wouldn't be in a thrift store or in a storage facility in rural Ohio.  Not that this one is rare by any stretch but glad to scoop it. And AGAIN - mono.
Tears For Fears - Songs From The Big Chair - When I was a kid I was so fascinated with this album.  Not just for the hits but for the title of the group and the album.  No way I was going to pass this up, in great shape too.
Ghostbusters (Original Soundtrack Album) - When I was real small, the kid across the street had this soundtrack on tape.  We used to crank that thing again and again.  Really nice shape here - this was a no brainer.
Engelbert Humperdinck - Live At The Riviera - British import version.  I remember finding this on eBay a year ago and I freaked out and was about to add it to discogs when I realized it was a reissue of the Parrot live record.  I have long ago nearly run out of Eng records that I don't have, I never come across them.  I would have paid a few dollars at least for this, mint condition too.

I don't usually mess with 45s but when he said they were up top and I'd have to climb that rickety ladder, I knew I had to go up just for the story.

Metallica - One - when I was a kid, my Uncle Rick brought me to a party at this friend's house.  I don't remember the occassion or where it was but it seemed far away (probably wasn't).  I do remember it was a huge mansion in a subdivision on a man made lake.  My uncle has always had impeccable taste (he dubbed the Tears for Fears album above for me around this time) and always had loads of vinyl.  Anyways, his friend who lived there and apparently was a big collector because my uncle called me over to see something in particular - it was the 12" version of this single.  At that time in my life (around 7th-8th grade) I pretty much listened to Metallica, Slayer and Suicidal Tendencies non stop.  I couldn't wrap my brain around what the hell this thing was.  I had never seen that cover.  It makes even less sense now because as I search I see that the 12" version was only released in the UK and/or Europe.  Well way up high on this ladder were tons of junk 45s crammed in boxes but one box in particular seemed to have records in sleeves, some of them picture sleeves.  While hanging onto that ladder for dear life (Terry recommended I just climb up there "It will hold you") I flipped with the other hand.  This is in prime shape as well and looks like its worth near $20.  Not that I intend to sell this bizarre relic of my childhood and my evening in Findlay.

Larry Carlton - Smiles And Smiles To Go - promo white label with identical B-side AND it comes (inexplicably) in the mint condition picture sleeve.  I have no words for this!

Once I decided I had enough, he locked up but not before mentioning he had some more stuff in both the cab and rear of his pickup truck.  So we took a good look at that stuff but I found nothing of interest.

The barbershop album Terry is holding in the first pic in this post was interesting.  After I had rooted around in 5-6 boxes Terry was scolding me for jumping around here and there and said I should just pick a shelf and go through 'em one by one.  I told him to pick a box and he casually pointed to one just a couple feet away from him on the floor.  Wouldn't you know - that classic barbershop album was right there, first record in the case, the only barbershop I saw all day.

Somebody called him while I was hunting.  I hunted a little quieter so I could try to eavesdrop and figure out the other side of the conversation.  It was another guy, just like me, apparently referred by the person that had just bought the truck load of 45s.  It seemed like the guy was asking too many questions, what was there to talk about besides picking a time to dig? Some people like like to hear themselves speak.  I honestly considered asking Terry to give me the phone, I wanted to say "I'm sure you are a serious collector, I'm sure you've been around and seen a lot.  Well, you've never seen anything like this, because it doesn't exist anywhere else.  There are so many thousands of records beyond what you could ever possibly fathom you need to just make an appointment and get down here".  I probably should have.

Terry only wanted $10 for all those records - I gave him a $20 and told him to keep it for his trouble.  I don't know when I'll be back...if I did my job right during this last visit, it will be another year.  If I come back any sooner, it will be because something didn't work right, maybe my fault, maybe not.  Until then I have some serious memories, a great story and a stack of new vinyl

I love finding strange things inside albums.  I found an awesome sexy love letter once, here I found this odd note inside my Woodstock 3xLP. 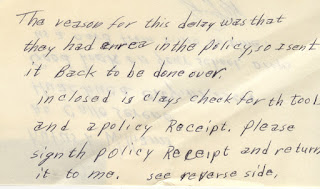 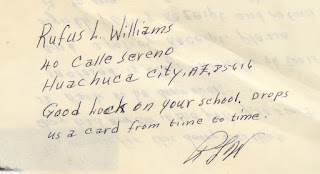 Email ThisBlogThis!Share to TwitterShare to FacebookShare to Pinterest
Labels: ohio, out of state