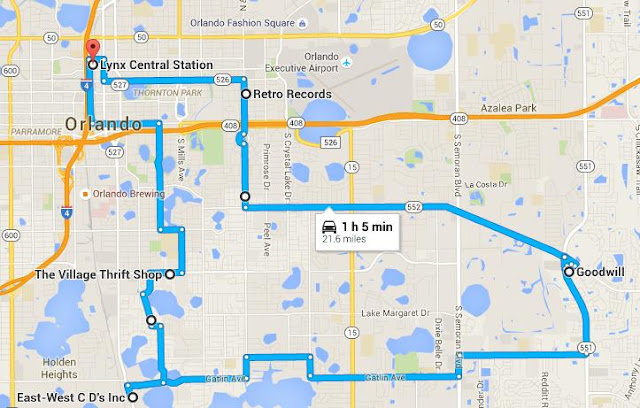 So I set out on another 20 miler to hit some old and new spots on a Tuesday afternoon.  I took link 50 all the way into the city down I-4 with my bike in tow so I could cruse around.  I had hopes to top things off with a nice lunch near the station before I got back on the bus.  I studied the map the night before to plot a course as best I could, knowing full well some improv would be necessary.

Retro Records was the only of the three stores I hit last year that I had any interest in visiting again.  Conveniently, it was right on my route.  However, they did not open until 11am and I wanted to get started earlier.  I considered going counter clockwise around the loop but Goodwill opened the earliest and I wanted to get that out of the way.  So I skipped over it...I considered going back at the end but after over 20 miles, I was done.  Not to mention I had a couple scores at that point anyway so I was ready to head out.  I did leave one nice one behind last year and I was tempted to see if it still was there.  But no need to revisit old haunts when there are plenty of new one around! 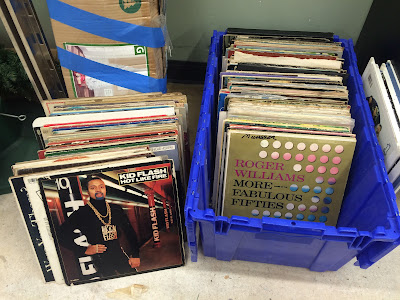 Like yesterday, I made the commitment to go WAY out of my way to hit a Goodwill knowing full well it might be a ton of garbage.  Well they did not disappoint in that regard.  But at least I got some silly pics to prove I wasted part of my day/life riding the 7 miles over there. 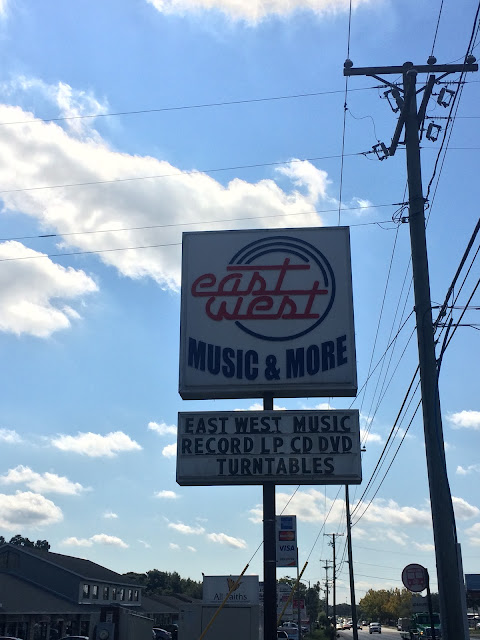 Somehow this one slipped past me during my research last year. Or maybe I decided it was too far south to check out (I did not have a bike last year).  Either way, it was the spot I was most excited about and while it disappointed in many regards, I'm happy with what I pulled out of there.

The shop keeper was kind and we chatted a bit.  Someone visited him (I never turned around) who apparently is a musician and going to play a show opening for Jon Anderson of Yes.  Then this mystery person bragged about how he knew Chris Squire before he died, etc... Being a serious Yes fan, I was a little impressed but it also reeked of exaggeration.  Things got worse when I left when the shop keeper told me about how he had personally sold Charlie Watts of the Rolling Stones a record worth $2000 that he paid $3 for. 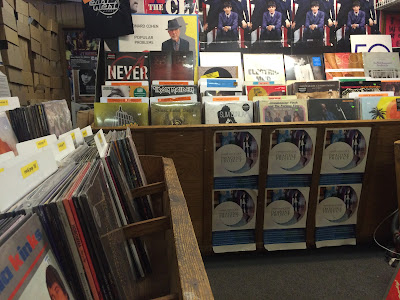 But I don't go to hunt for records to make friends so I can let all this nonsense go.  But I cannot let go a messy shop with boxes of records everywhere, most unmarked and a wild arrangement of vinyl racks that leave off then pick up on the other side of the small space.  I was in the final bins when I finally found something interesting for a fair price ($12)...when I saw it was an original issue on blue vinyl, it was an easy decision. 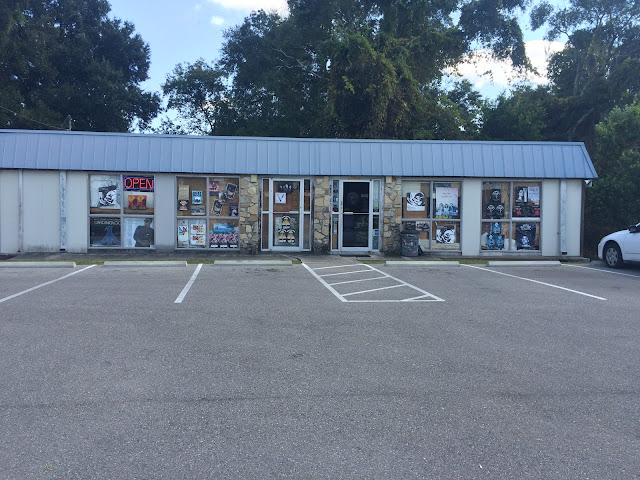 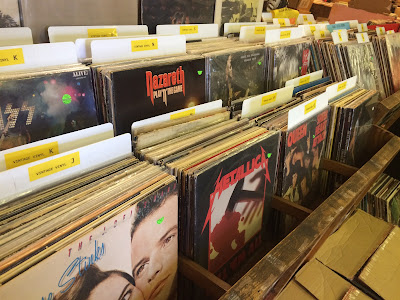 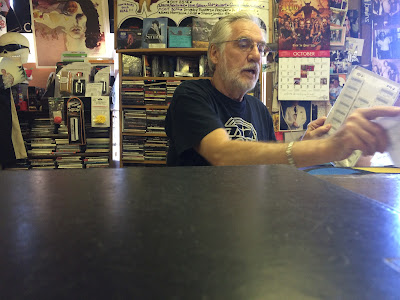 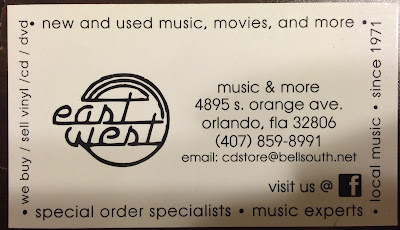 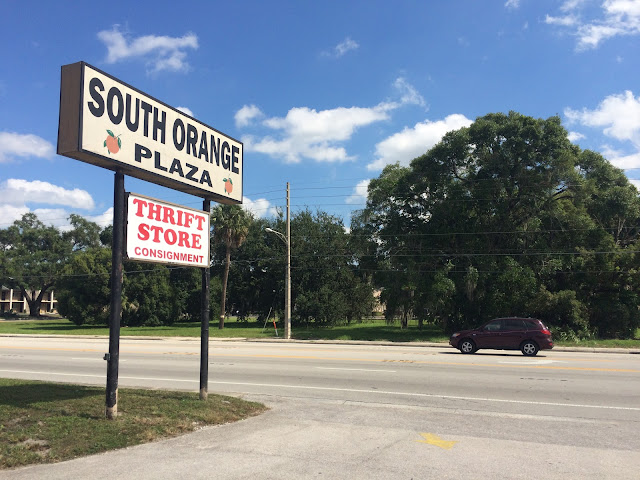 I have no idea what this place is called, it doesn't seem to have a name and did not appear in Google maps at all.  I was en route to my next stop when I saw the big sign above and hit the brakes to check it out. 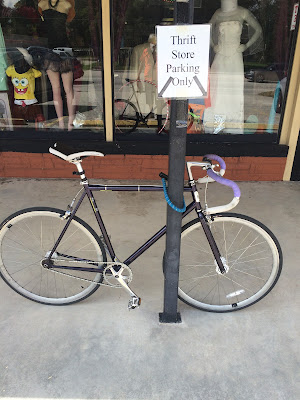 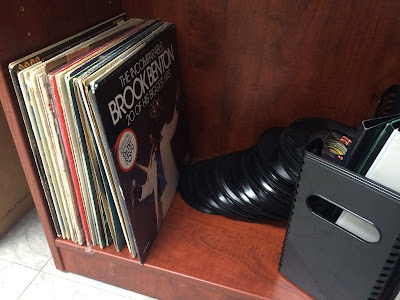 Unbelievably, they did have some vinyl. The 7" records were all without sleeves so that did not interest me at all.  The 10-12 LPs were all junk except for one which was pretty beat.  The bottom seam was blown out on both the jacket and inner sleeve but the platter itself was pristine.  I couldn't not pass up this opportunity to put my M.O. discography to rest forever (no other releases besides the two I already have really interest me).

So I brought it up and pointed out that no prices were marked and that the record was pretty jacked up...I offered the shop keeper a buck.  He didn't even glance at the vinyl and was adamant that 'LPs are $2 and 45s are $1'.  I can't believe I paid him, but I am ashamed to admit I tolerated his tone and paid the man.  It will be my pleasure to never return. 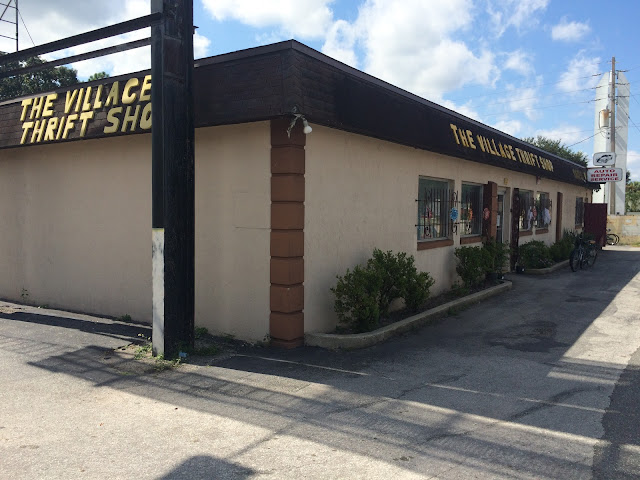 I called the day before to ask if this place had any vinyl.  The person that answered (likely pictured below) instantly answered that she did not want to buy any vinyl because the demand is so low.  I had to cut her diatribe short and tell her that I wasn't looking to sell anything - I wanted to see the vinyl and buy it! She said she had some but 'not much'.  Good enough for me.

Well the place was a real hell hole.  I have been in so many thrift stores it boggles the mind and I've seen some warzone type dumps of junk all over the land.  But this may take the cake...you truly could not easily walk around.  Much of it was clothes, there were some housewares along one wall.  There were just garbage bags of unknown goods piled up high 'Hoarders' style behind the register! 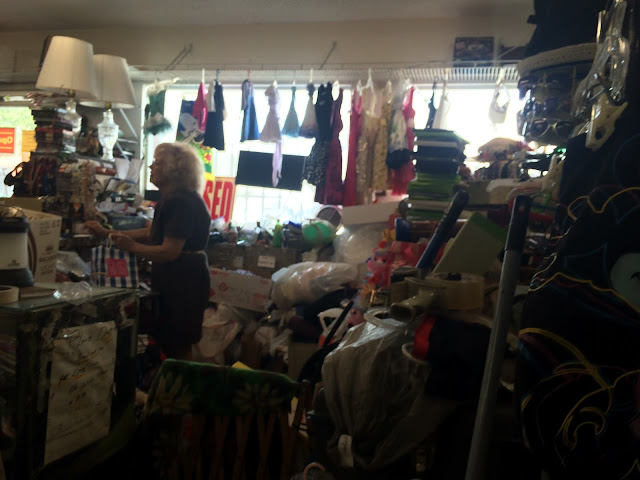 I wandered around for a while trying to find the damn records and was itching to get the hell out of there.  Finally I had to identify myself as the gentleman caller from the day before and they directed me to the corner of the store where the box was totally hidden under yet another overloaded rack of clothes.  All junk, save one, which I own and love.  I hope someone can pick it up and appreciate it one day. 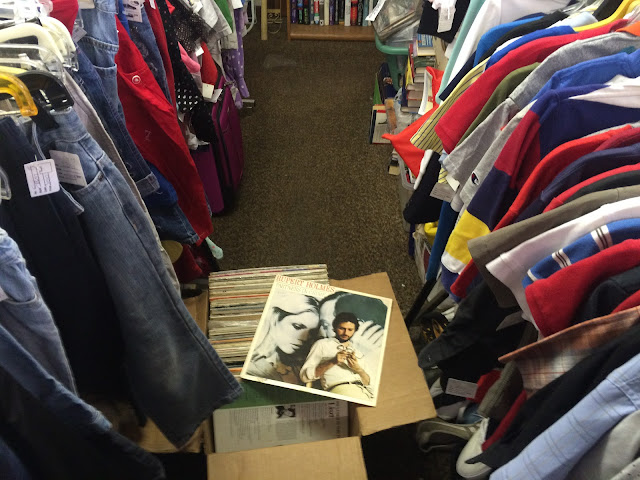 Also I am extremely proud to mention that this is post #200! Next month will also be the two year anniversary of this blog.  It's been an intense couple years and I'm proud of the work I've done and the stories I have to tell.  Here's to one hundred more!