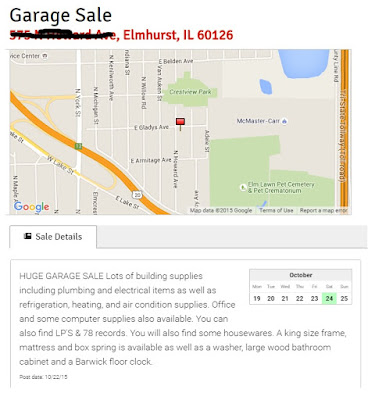 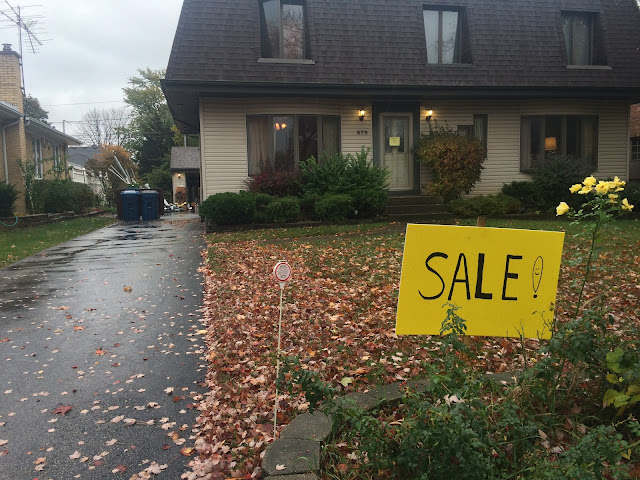 On a rainy Saturday afternoon, I was very pleased to find that of the 3 garage sales that had the word 'records' in their descriptions on gsalr.com, one of them was just a couple blocks from my girlfriends house. (the other two were 10-20 miles away).  So I sped over on my bike through the increasing rain fall.

I wandered up the driveway to find a round older man with a cane, sitting in a lawn chair just inside his garage which was quite filled with junk.  The driveway was littered with wares, most of them soaked and probably had been out since the night before.  A couple other junk pickers were doing what they do as I peered about for the vinyl.  I wasted little time before approaching the proprietor to inquire and he mumbled something then got up.  Apparently, it was intended that I follow him.

He walked onto the deck and opened the back door.  As he had still not given me any verbal instructions I figured I should be polite and I asked if I should follow him inside.  He replied that I should 'if I want to see the records!', with a distinct note of rancor in his throat.  Meekly, I followed.

Through the kitchen and into the living room he led; there I found 4 large red bins stuffed with vinyl.  Scores!!!

The Top Ten Barbershop Quartets Of 1969 - Of course I have this already, I distinctly remember getting it at Savers a while back.  The orange and black theme cover always reminds me that this is the year Mark IV won.  If you asked me who won in 69, I'd have to guess.  But if you show me that cover with the text obscured, I'd know right away.

Now I saw it and knew I had it, but I hoped perhaps it was the mono version.  It was not - it was something better! It was a reissue on MCA from 1973! I had no idea that MCA reissued any of these Decca albums but now I must assume there are more.  I knew they reissued the world's most famous barbershop comp but I didn't know they dabbled in the annual releases as well.  I will have to keep my eyes peeled for more.

Breakfast At Tiffany's - one of my all time favorite movies, I've seen this soundtrack a few times but it was always beat to hell.  This one is pretty clean so I scooped it.  I have one other Henry Mancini album I got from a deceased relative long ago, I'm building quite the collection!

Polka Party - I recently donated about 30 albums to the local St. V's.  Since then, I had been thinking I need to dump my handful of Lil' Wally records so I can focus on Big Ed. (No, not him).  But I just couldn't resist this one.  If I keep grabbing both, I'll need a new home for just my polka collection.

The Best Of Berlin In Barbershop - This one was just staggering.  I already have it, but I got it on ebay and I've only seen that one copy on there ever after checking followed searches 100s and 100s of times.  This one is in crazy mint condition too - no way I was going to pass it up, even if it was a duplicate.

He kind of wandered in and out of the house while I was searching.  When I was done, he was sitting on the stairs waiting for me.  He asked to see what I had and I worried he was going to try and pull some Antiques Road Show type pricing on me but he just asked for $8.  $2/each is fair but I threw the old guy a tenner and told him we'd call it even.  He shook my hand and asked my name, and asked if I lived around the area.  When we parted ways, I distinctly thought I'd miss him.  What a nice guy. 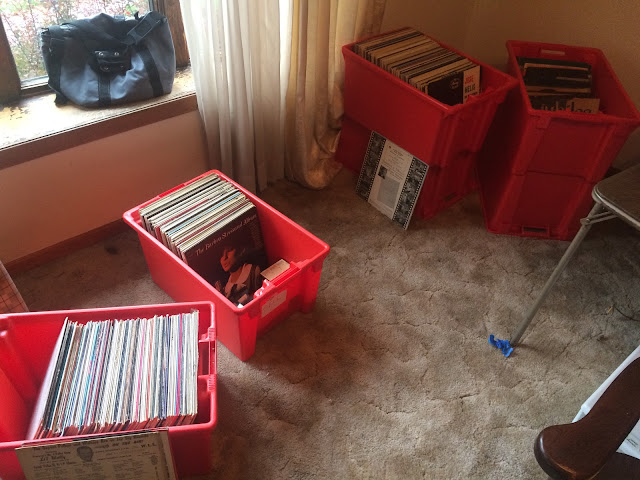