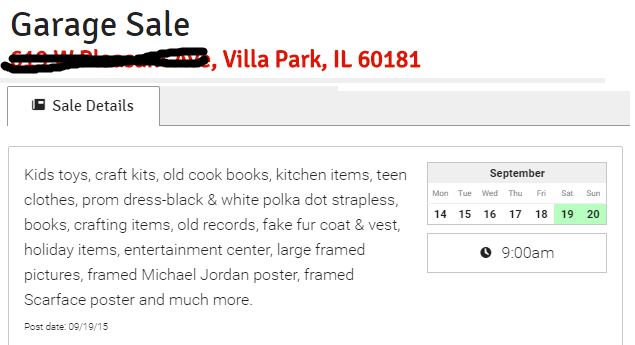 Easily one of the most awkward record transactions I have ever attempted to take part in.  Had to run to the store and scoped this spot above on gsalr.com and it was basically on the way so we swung through.  In fact, there were only two sales on the site which listed records in the description this entire weekend and the other was far, far away.  So we arrived, took a glance around - no vinyl.  So I asked - as I always do - 'so I heard you had some records?'.  They both kind of looked at me and I mentioned that I had seen it online advertised that way.  The husband immediately responded that they did not advertise online.  I just kind of stared at him....you can be damn sure that someone had advertised! His wife quickly copped to it so he admitted that he did have some vinyl, but it was in the house.  I had that happen to me once long ago however those people were so warm and inviting and had tons of great vinyl - none of that applies here.  He didn't invite me in to look but that's fair so I waited for him to return.  In the meantime his wife commented that 'those records are his', apparently meaning that she didn't care about them and worse yet had possibly listed them for sale on the internet without his permission.

He came back with the most pitiful stack of records ever, less than 10 and I think 6 were from UFO.  Now I am almost kicking myself as the live album seen below was likely a German import - it was never released in the USA at all and in the UK only on some really small and unknown labels.  And the one on the left....just wow.

I tried to be polite and commented 'wow you must really like UFO' as I handed the stack back to him.  He said that he had them all on CD now so he didn't need the vinyl.  Sad, but reasonable.  I want to be clear however that I don't dislike the guy because of his taste in music - to drag me out to your home, invite me to look at records when a) you only have 8 of them, and b) they aren't really for sale is a bit unfair.  Total waste of time.  My girlfriend made a $5 offer on some kind of $10 children's craft kit and the wife immediately said 'I cant take less than $8'.  Well enjoy bringing all your old junk back in the house tomorrow. 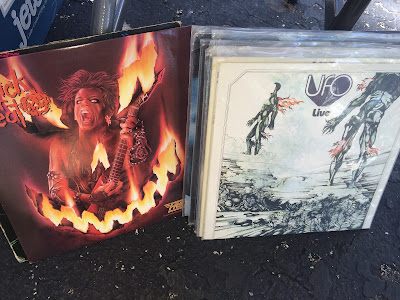 So needless to say, I was bummed.  We headed back and my girl recommended that we stop at Goodwill Elmhurst.  I hate this place...its so bombed out and the records never seem to turn at all.  But I gave in and we headed in.

Well suffice to say, I scored big time and had some close calls that still tantalize me.  I found my fourth (hey, its one of my favorite albums of all time) copy of the 'Red Album', this one with a cool promo sticker on the front.  No real promos exist for these old Parrot LPs but this is cool enough for me and the jacket and vinyl look great.  But that would have barely qualified to be more than a consolation prize...there was more in store. 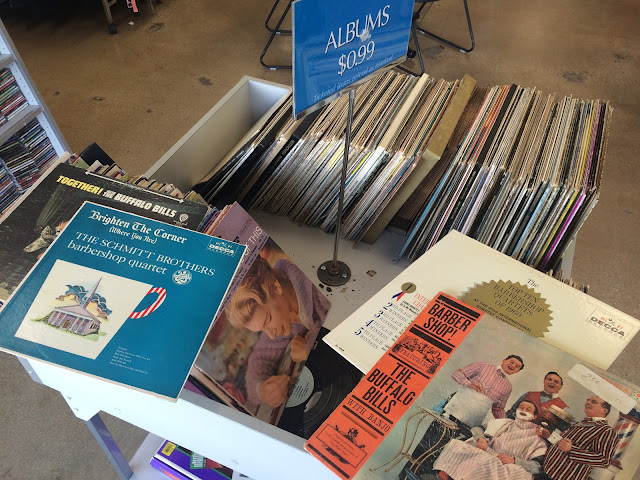 Barbershop mania! There was a 5th as well - which I purchased!

Brighten The Corner (Where You Are) - pre-1970 quartets don't interest me much, and pre-1965 (or so) even less.  But I might have grabbed this anyway if the record was in the jacket! I even went through the entire bin a second time looking for 'naked' records and came up with nothing.

Together! With The Buffalo Bills - I was all over this one - but the vinyl was also MIA! This is a live album...I added the promo version to the discogs DB a while back and this almost never comes up even on ebay.  This isn't the promo (just added that too) and I am still disturbed wondering where that poor record ended up...

Barber Shop! Featuring The Buffalo Bills With Banjo - easily one of the most popular barbershop albums of all time, but it holds no interest for me.  Still cool to see another piece of what is obviously someone's collection here.

The Top Ten Barbershop Quartets of 1960 - This is a huge find, except I already have it. I was eagerly scanning my collection online hoping I needed this one but apparently I got it about 6 months ago.  I have upwards of ten 'top ten' albums and its too much to memorize.  If the Town & Country Four have an LP, I've still never found evidence of it despite my massive research.  So this will be a keen score for someone else, one of only 5 appearances ever for that quartet.

The Suntones - Keep America Singing - I now have 3 of 9 LPs from what is probably the world's most famous quartet.  I can do without this patriotic subject material (not a political slant - just that the singular angle gets a bit tiring) but the harmonies are there.  I still find it strange that the guys would release an album on another label halfway through their discography (all the others are on their own label) and the mystery will abound for sometime. Even stranger is that on the rear jacket someone has made a small notation with pen: 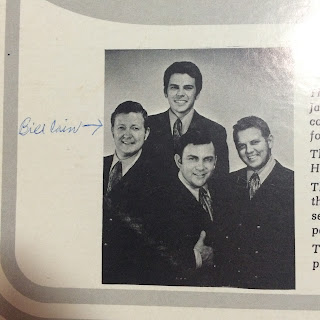 Did they know Bill? He died back in 2004 (RIP). There is otherwise no credits anywhere on the album or anyway to know who the members were unless you can recognize them facially.  Interesting...

I also found a local barbershop chorus record I've seen before.  Someone had a nice collection! I remain quite happy with my two scores and it was a hell of a way to come back after a dreadful garage sale.  To find all this barbershop in a store I normally disdain is a good reminder to leave no stone unturned!