This was SUPPOSED to be a post about the All-Night Flea Market, and how it was my third year going, and how exciting it was and all the great stuff I picked up.  But it is not, because the flea market was a bust.  I got some intel a couple hours before we were set to leave that claimed the lines just to get inside were 'hours' long.  I attributed this to exaggeration and I didn't care how long they might have been - there was no way I was going to walk away from something I had literally been waiting a full year to do without seeing it for myself.

As we got close I noticed that the traffic had built up outside the area it usually does in years past.  Then we got caught in a straight up traffic jam - I bragged about my 'secret' parking place in blogs past....we parked 2-3 blocks beyond it, cars everywhere.  We walked over to the grounds and alas, the line just to pay admission and get in was at least 150 people deep.  There was just no way I was going to deal with that and we bailed.  We headed over to a friends house nearby in Wheaton (she was also bummed) and I was rewarded with an OG press of a punk classic she had scored at Savers Downers Grove.  Not a bad consolation prize at all!

But enough of failed flea markets - Sunday morning came around and once again I was able to drum up a nice round of shops via Google maps.  I made a quick list and we were off! 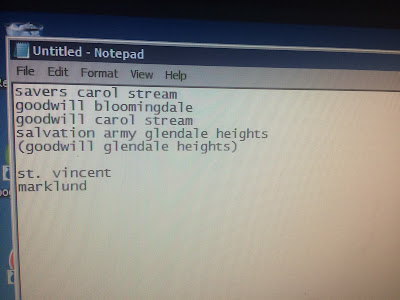 We started with two standbys: Marklund and St. Vincent.  Both had junk vinyl (nothing new there) so we got into the real 'meat' of our trip with a gang of new stores we hadn't been to before, or at least not recently.

I only visited Savers Carol Stream once before - I pulled out a bunch of vinyl including a sweet Eng comp for my girlfriend which had a concert program tucked inside unbeknownst to me! Still sour about that but I got some stuff of my own on that stop.  This time my luck was even better - they had shuffled the store around and now the books and vinyl were not near the door as they were before, they were way on the otherside.  But I grabbed two barbershop classics out of there! Unreal! I would also give the vinyl back if I could meet the person who donated those.  The second album is far older than the first and truly a classic - very rare! Beyond those I also grabbed the full length from Double.  You might not know the group but you know their song.  I see now there is a blue vinyl variant - that would be a really nice pickup, if you can find it.

Next up was Goodwill Bloomingdale.  This puts me at close to 30 different Goodwills around the midwest and beyond I have stopped in at.  My luck continued - I grabbed a nice Eng comp I only saw in a shop once before last summer.  I also grabbed a polka record that looked enticing - very happy with this upon doing some research of the artist.  And without a grain of 'guilty pleasure' in my motives, I grabbed an 80s classic I have probably passed up 10,000 times.  And I've listened to it at length since I grabbed it! They also had a wild stack of K-Tel comps - I've been tempted a few times since I grabbed such a nice one early this year but I passed.  I almost went for a Realistic (Radio Shack brand) slipmat but the jacket was empty. 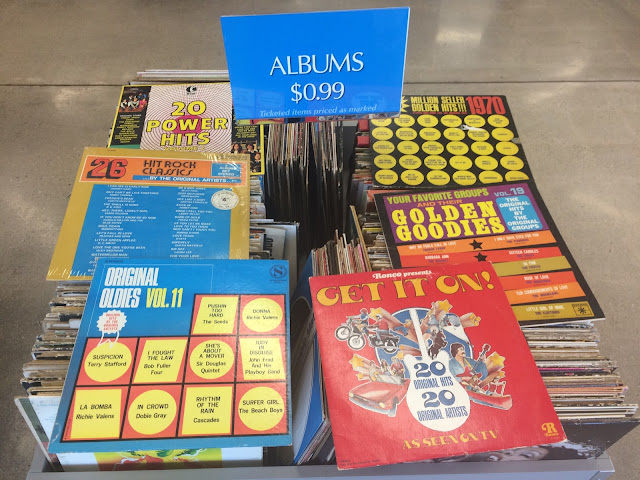 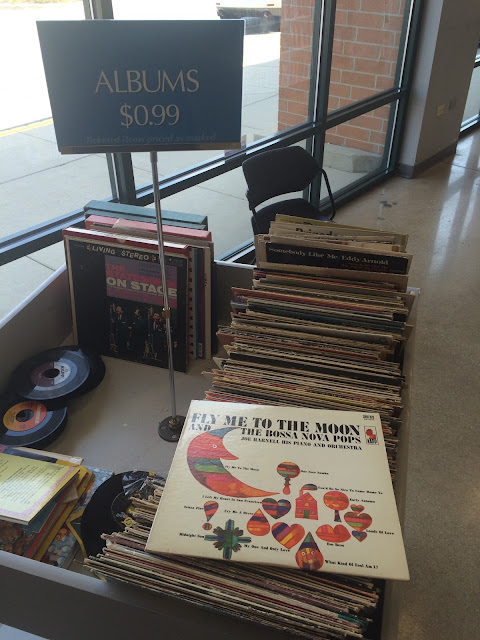 Next up was another Goodwill I never visited before - Carol Stream.  I thought my luck might continue but I tapped out.  I almost scooped a Bossa Nova platter but I decided I'd only be buying it to keep my 'luck' going, I didn't really want it or need it.  So after a catch and release on that one, we headed out as the thrift store madness began to set in.

We checked out Family Tree Resale in Wheaton (not to be confused with Family Tree Thrift, also in Wheaton, which I have never been to) but they had no records - mostly clothes.  Google showed there is another store in the same strip mall called 'Second Chance' but it had become a dance studio.  Still too stupid to call it a day, we drove over to Wise Penny in downtown Wheaton just to find out they were closed.  We considered hitting up New Uses back on North Ave on the way back but now we were so worn out we decided to call it quits.

My girl had picked up a mint complete Battleship game and we played a couple games when we got back then fell into a deep comatose nap.  When we woke up I convinced her to do a 2-for-2 trade on two Verve classics both of us had - except I recently discovered she had the promos for both! With some convincing she gave in.  So I had a hell of a haul that day to lug home but it was worth it.  Another productive Sunday.