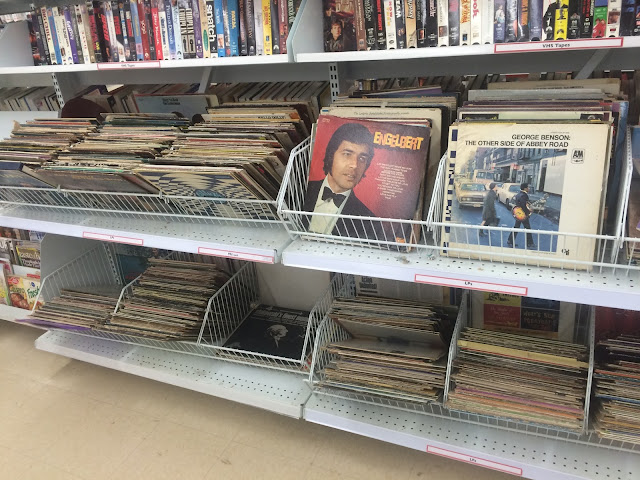 It has become a tradition to stop in after getting my haircut in nearby Oakbrook.  I've pulled some interesting scores out of here and it's been a while since I stopped in - my hair was quite long and unruly.

I got a trim today and made time to stop in and found they moved the record bins away from the wall and into a nearby aisle.  I didn't find much outside of the two records you see up front - one of which I of course own and the other (which I also own) was badly water damaged.  But so rare to come across a CTI classic like that in a thrift store like this.

But I did not walk away empty handed - been looking for a mono version of the first TJB album for a while.  I completed the entire discography a while ago and while I am not trying to acquire the mono version of everything, I thought this one would be nice to have as it is the debut and also one of the first A&M records, period.  I came across another stereo copy just a couple minutes before I found this one and was delighted when I saw the 'STEREO' missing from the lower right hand corner. Alas, I have now found that it is actually a reissue, two years after the initial release.  My eyes are peeled for the real deal!  Made the trip worthwhile for me!