If I didn't have 150+ other posts on this blog I'd feel a little more guilty about posting about the same place four times (even if it is over more than a year).  And I'd feel guiltier still (in fact, I wouldn't even bother posting at all) if I had worse luck at the place.  But the truth is I don't and it is magnificently ironic that my closest thrift store (about 2 miles) seems to have not only the best turnover but also a selection sent from the heavens above.

Let's quickly recap my past scores:

April 2014: Most Of All - 'Rainy Night In Georgia' makes this worthwhile if nothing else

July 2014: Association, The - Greatest Hits! - too many hits to pass up here, I come across this one often and I'm glad I already own it

September 2014: I'm A Man - alright, I'll admit it: I bought this largely for its novelty value.  Though I have spun it, it is quite ridiculous and I do not regret it one iota.

March 2015: Enter Center Stage, Lets' Hear A Polka, Polka Festival.  The barbershop album is for my girl....its rarity is VERY high and I can't believe I found it at all, anywhere.  The polka albums were a real treat to come across and I'll buy any Eddie B. that crosses my path.

I may have visited one or two times additional (at most) in this period but I did not come across anything interesting or buy anything so I did not blog about it.  Still - to find this group of vinyls here is just insane.  Today was perhaps the most bombastic yet.

I have let my cycling get behind...I strive for 200 miles a month minimum, not counting my normal commutes to/from work.  But the heat has been wearing on me and I've been kind of lazy I must admit.  I was so beat down after work I had a bite to eat and just laid down for a nap.  I swore I'd get up after an hour and do at least 5 miles but 90 minutes passed and I strongly considered just sleeping 12 hours until the next morning.  But I summoned the strength and just ran out the door before I could think about it too much.  My initial destination was Target so I could grab a Method dish soap refill.  Then I stopped at nearby Work N' Gear and spent $40 on their knock off of the famous Dickies Eisenhour jacket.  We just got our company logo on file at a local embroiderer and I intend to have it done soon (hopefully drop it off tomorrow).  Then I went way out of my way to Savers before coming back east on Grand to form the full loop.

As outlined above, I have found a variety of Engelbert albums here, but they come and go.  I always seem to find new, different albums entirely or at least different copies of the same album (yes, I can tell).  Today I found a wild array of Engelbert albums, much of his later Epic years releases which are far more scarce (though not quite 'rare') than his Parrot discography. 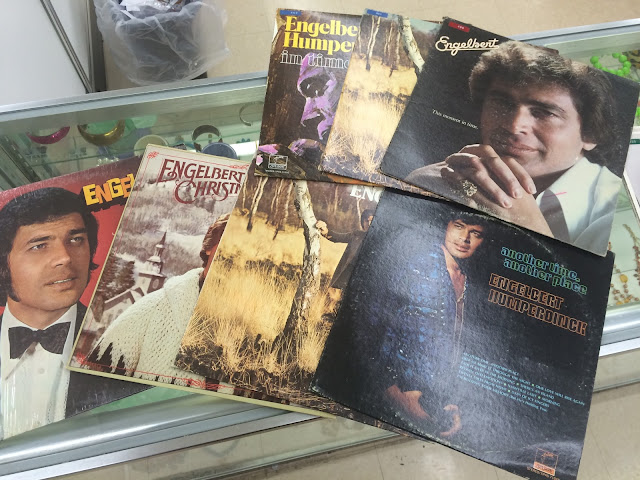 I am far from a Dylan fan but I found two Dylan albums - both mono! Both appeared to be in good shape also - this is the kind of stuff you can buy for $1 from Savers then take down to your local record store and use as trade fodder for store credit, every idiot who wakes up one morning and fancies himself a 'record collector' would be glad to pay 10x the price.  And that aside, honestly speaking and regardless of my own opinion, they are classic albums.  I have had Al Koopers biography for over a decade and worn it out I've read it so many times...his stories about the recording to the lead track on side A made this an easy buy.  Better yet, I seem to have somehow snagged an obscure variation.  It was hard to leave the 2xLP behind but I mustered the courage and moved on. 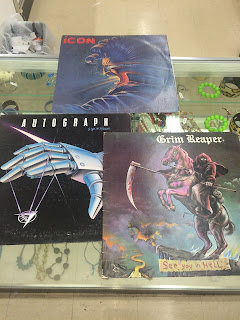 I also came across an interesting lot of 80s hard rock records.  There was an Autograph album which did NOT contain their biggest hit (would have passed regardless) then two really obsure others.  The first looked foreign - but the group is from Arizona.  The second (which I could not resist) is British to the bone.  I am cranking up the second side now and it is a real treat - not disappointing at all!


So I walked out with the two and I am very pleased with both.  Their uniqueness and also their music meet my quality standards - I need to stop into this place more often!