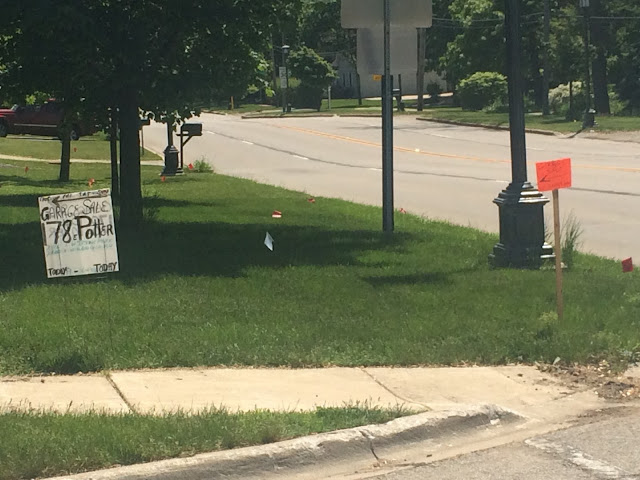 I never bother with garage sales without using gsalr.com at this point.  Call it laziness but I get tired of rolling up to ask 'do you have any record albums?' (and then sometimes having to explain what those are) just to get a 'no'.  But I was stuck at the Wood Dale train station on a Saturday afternoon with about an hour to kill and I had seen a couple garage sales on my 8 mile ride over.  So I turned around and went back to investigate.

The first one gave me the response outlined above.  But I never even got to ask the question at the second one as I saw a card table full of vinyl before the words could be released from my lips! In a townhouse on a very short dead end street, the resident had some serious taste in music that veered from pop to quality jazz. 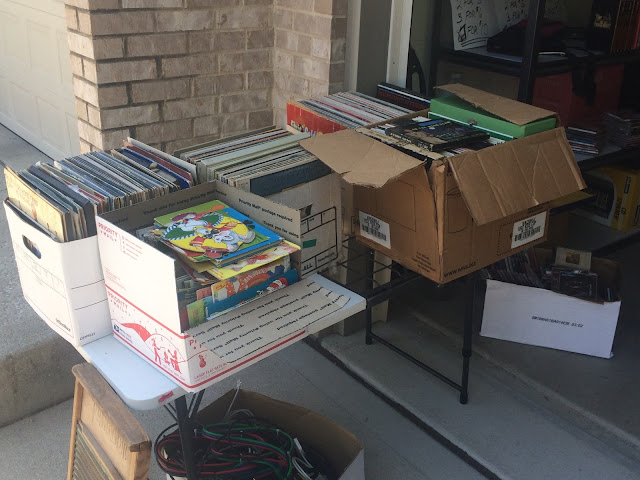 Weather Report - Black Market
I have 'Heavy Weather' along with 1600 others - grabbed it long ago over at a store I keep meaning to revisit.  This had a different inner sleeve, which had a promo for a comp called 'Limo'.  It was promptly discarded - inner sleeves for other companies are a major pet peeve of mine.

Traffic - The Low Spark Of High Heeled Boys
Just recently lamented that I still don't own this die cut gem when I picked up a live record.  I have seen sealed copies for way too much, all the way to super beat down copies for a few cents (and still not worth it).  The jacket is clean, but the vinyl is MINT.  So glad to finally own this.

Herbie Mann - Push Push
This makes five Herbie albums.  His CTI 3000 release being the cherry-buster for me in that label/series.  I picked it up over a year ago (can't believe its been that long) and now I have nearly all the Pete Turner covers.  I've seen this one come up on some 'most outrageous covers' lists before but I just couldn't resist the die cut.  Or that hairy Jewish chest.  Rest in peace, Herbie.

Christopher Cross - Christopher Cross
Must have passed on this 100 times before.  This also had a swapped inner sleeve (since replaced). A necessary piece of my burgeoning soft rock discography.

Billy Joel - 52nd Street
The last piece of the Stranger-Innocent Man trifecta though I'll admit I bought it largely for 'Zanzibar'.  I want a tab there, too!

Gordon Lightfoot - If You Could Read My Mind
Had to check if I had this already - got it confused with a vinyl I grabbed in Oak Park a while back.  Glad to have some more classic Gord.

And for all this....only six bucks! Better yet - today I took my old fridge (it died earlier this week, already replaced) to a scrap yard in Cicero and they gave me (you guessed it) the same amount.  Old appliances for vinyl? Yes please!