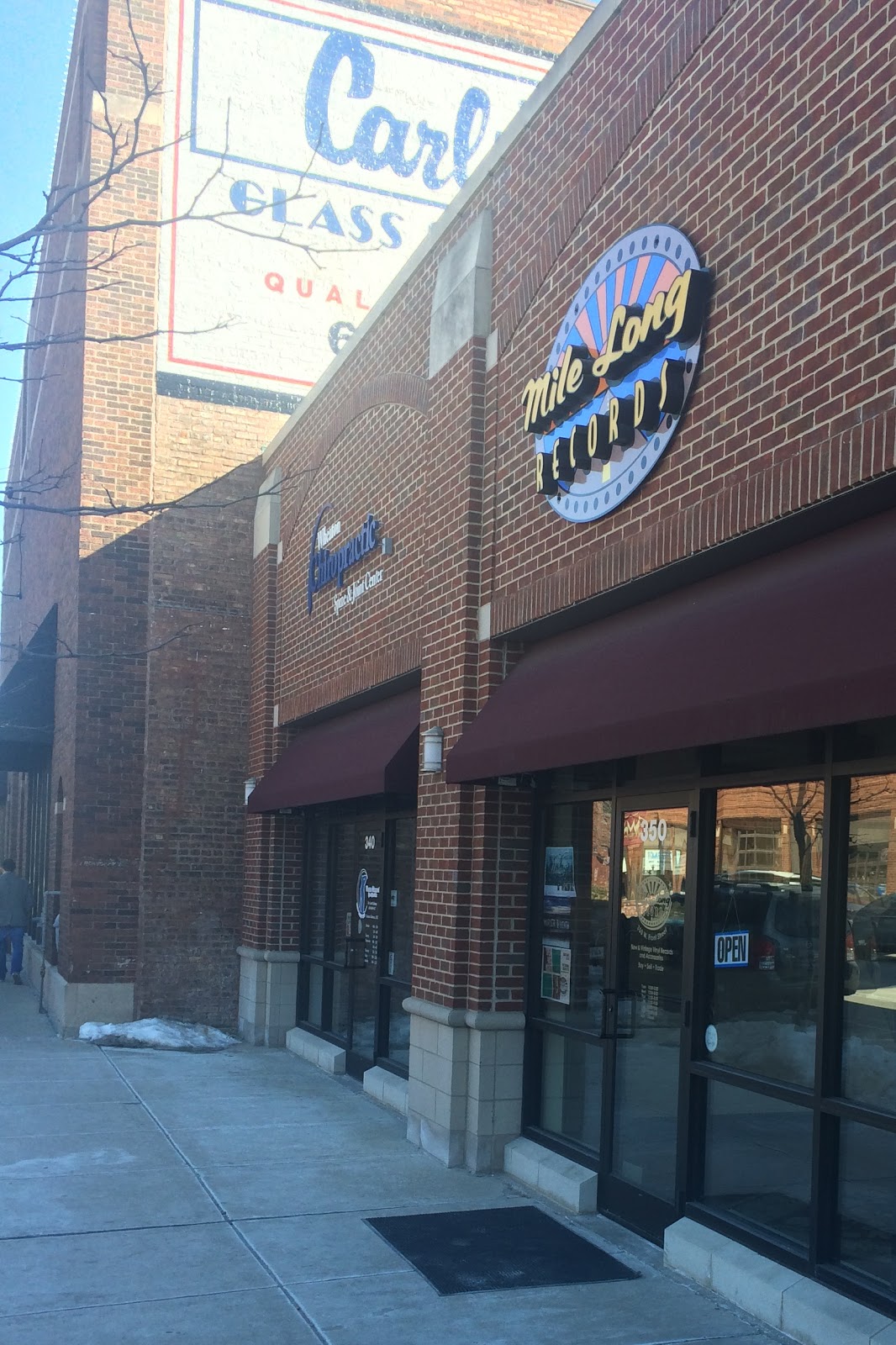 My girlfriend lives about a mile from a station on the same line as the Wheaton stop (which turns out to be literally a block away) so we made plans to check it out.

We made it down a week later and I was pleasantly surprised by the well kept and clean area well stocked with vinyl.  One wall had about half it's real estate devoted to new sealed stuff and a rack in the back contained some 'discount' records for a buck or two.  A very large and well organized rack of 7 inches was beyond the register - everything accounted for!

I grabbed a Deodato record....hard to pass up any CTI stuff unless its really torn apart (this is very clean, on the other hand).  I picked up a couple Tom Jones 45s to add to my collection...it is hard to navigate my collection on discogs on my phone sometimes and I ended up buying a couple duplicates.  No matter - I have a few Parrot dupes already.  I did however pick up one I did need - I had the picture sleeve without the record so it was nice to complete that.

We stopped at Peet's next door for a drink afterwards and was very happy to find that Wheaton left its station unlocked (even on a Sunday) during a cold afternoon.  We were home in a jiff - well worth the trip! 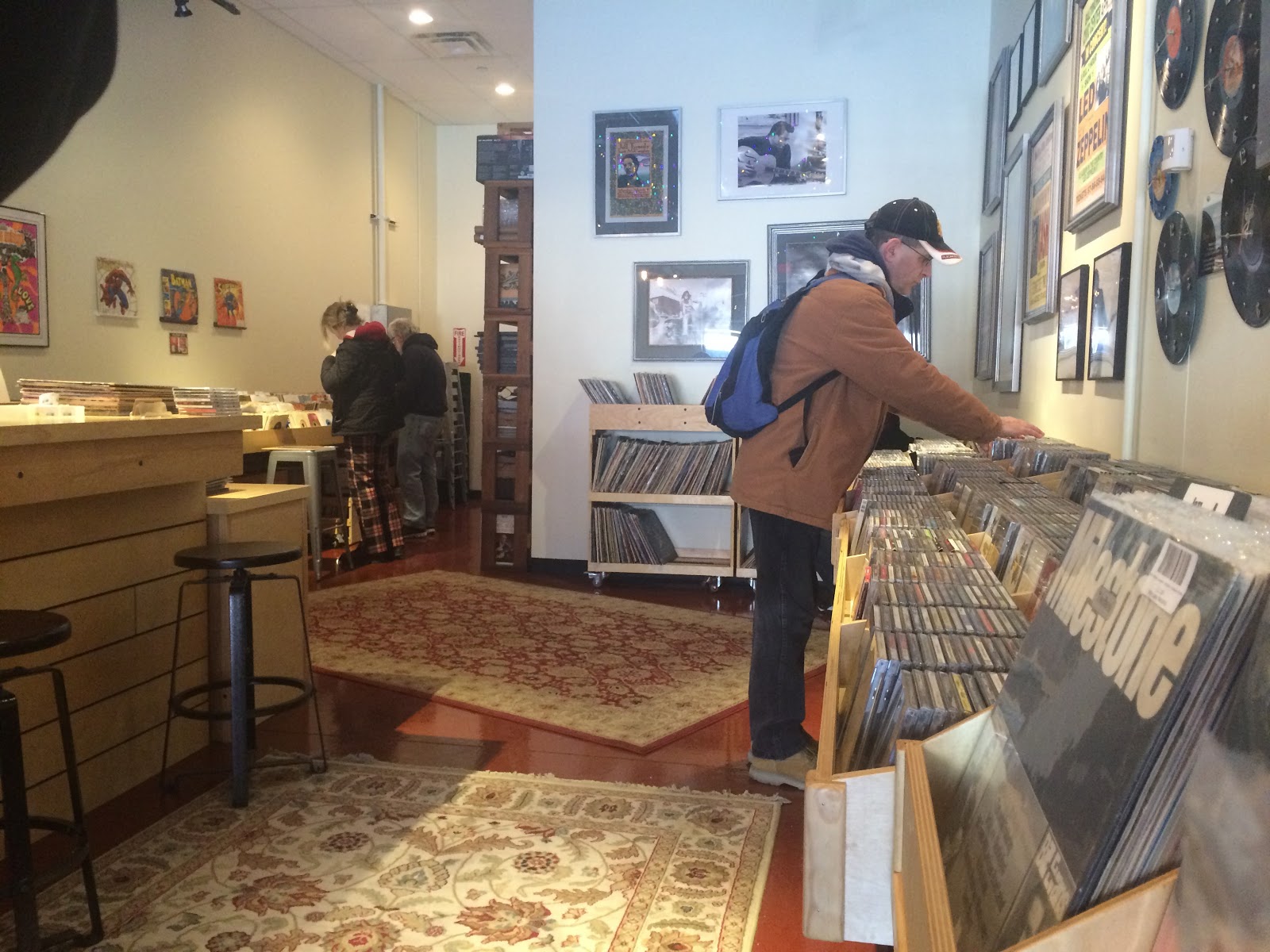 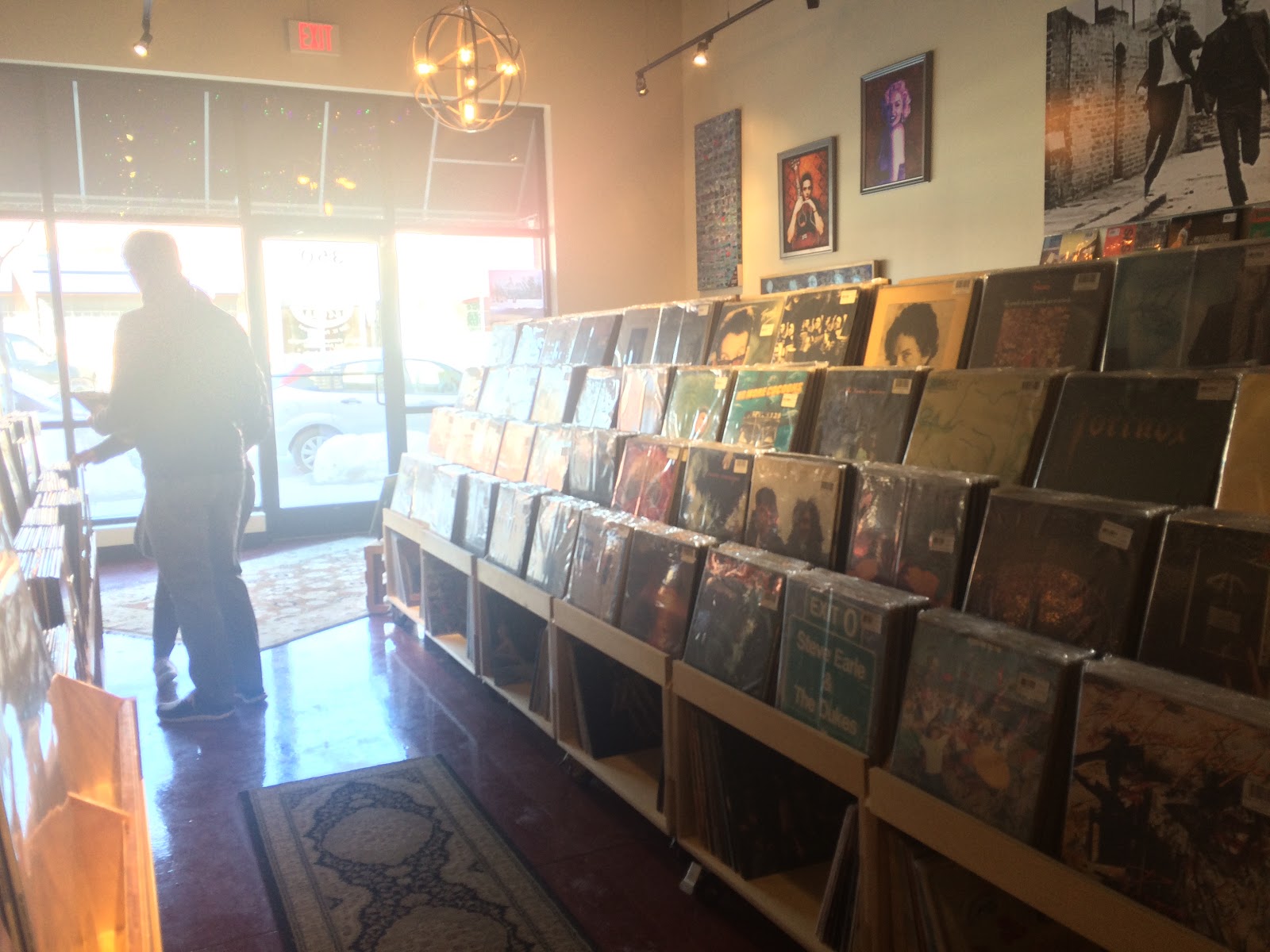 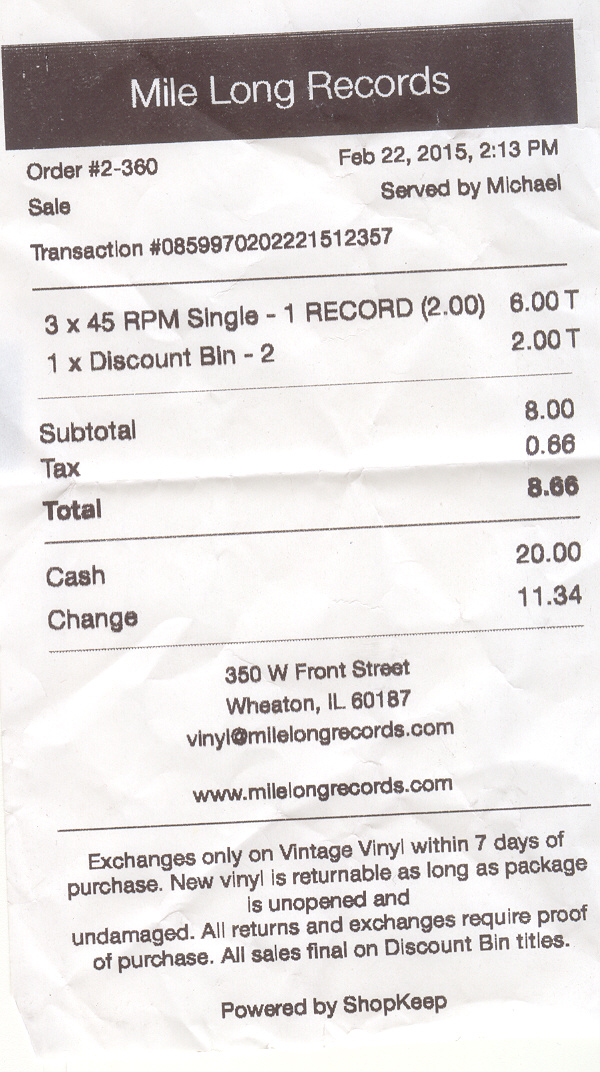 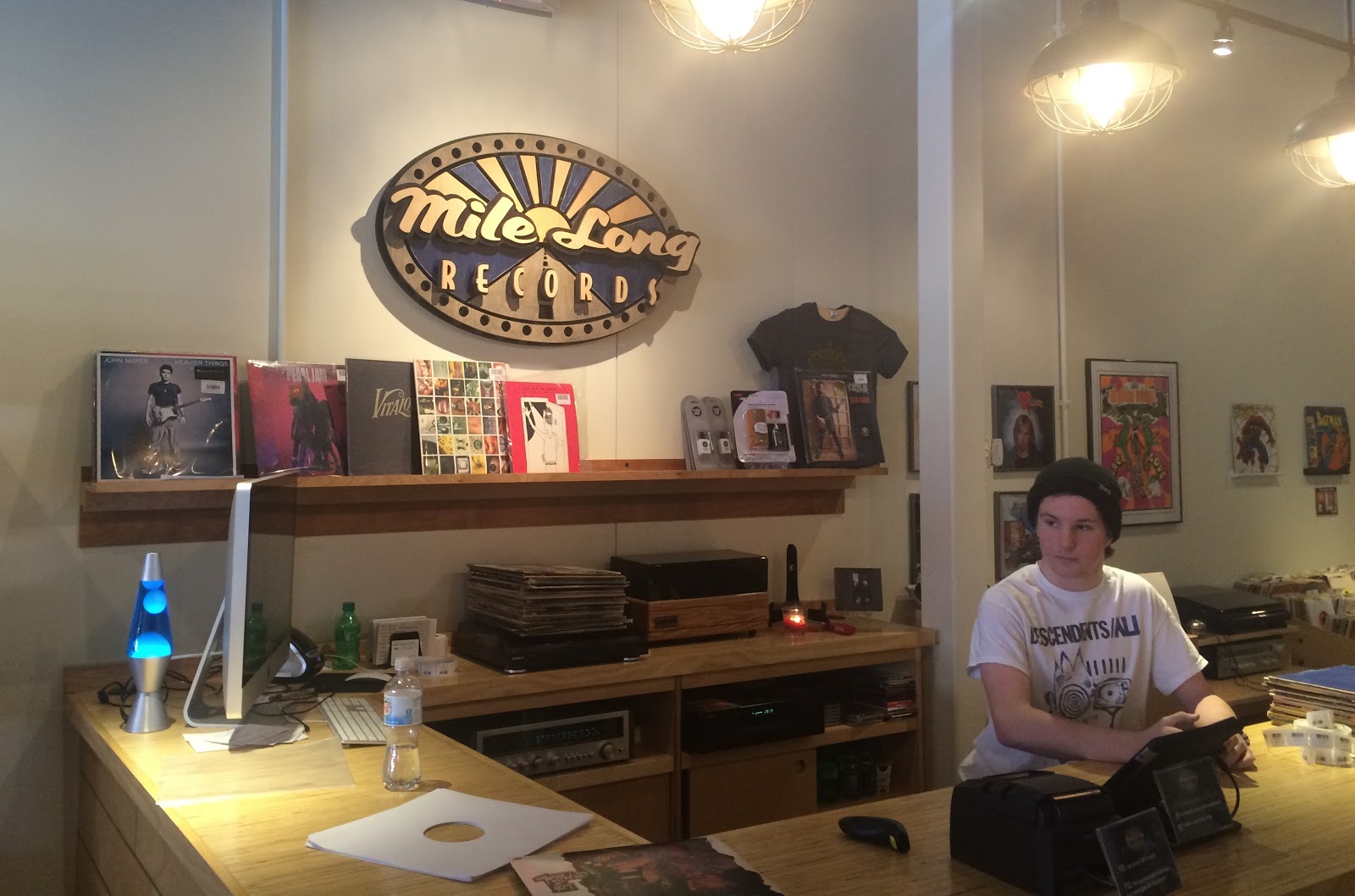 Close to a year ago I picked up major scores at this shop while out that way getting my hair cut.  Apparently it had been a while between cuts because I only got back that way now.  Glad I did.

My barbershop obsession was well fueled with a classic album I picked up from one of the world's most celebrated quartets.  And I know, I know...I'm supposed to stop buying Ray Price albums but I just can't.  I get the feeling half the time they are just repackaged comps but I don't care.  A fair way to part with a buck.  I also picked up a regional German cookbook and a couple books for my girlfriend's daughter.  A nice haul, all around.

Downtown Appleton offers a trio of record stores and I've already hit most of the thrift stores in the surrounding area.  Still, leaving no stone unturned and no crate un-dug, I trudged on during a more recent trip to revisit some old haunts and see what was left. 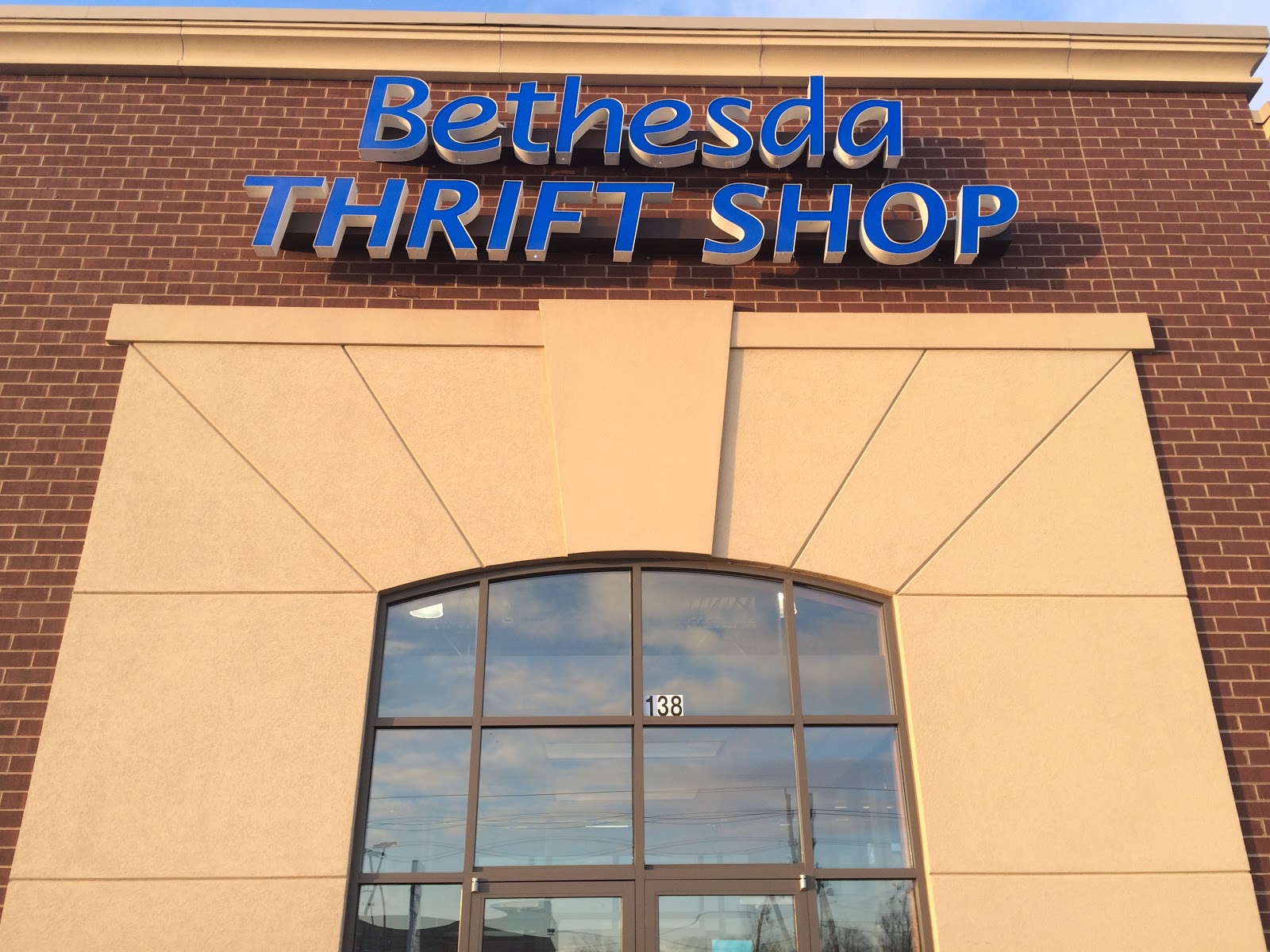 I called in advance to make sure they had vinyl.  After a lengthy wait, I was told they did.  This was true - but just barely, they had hardly more than 10-12 vinyls in a rack.  Still, I located a copy of an 80s barbershop LP that I was very pleased to see turn up. 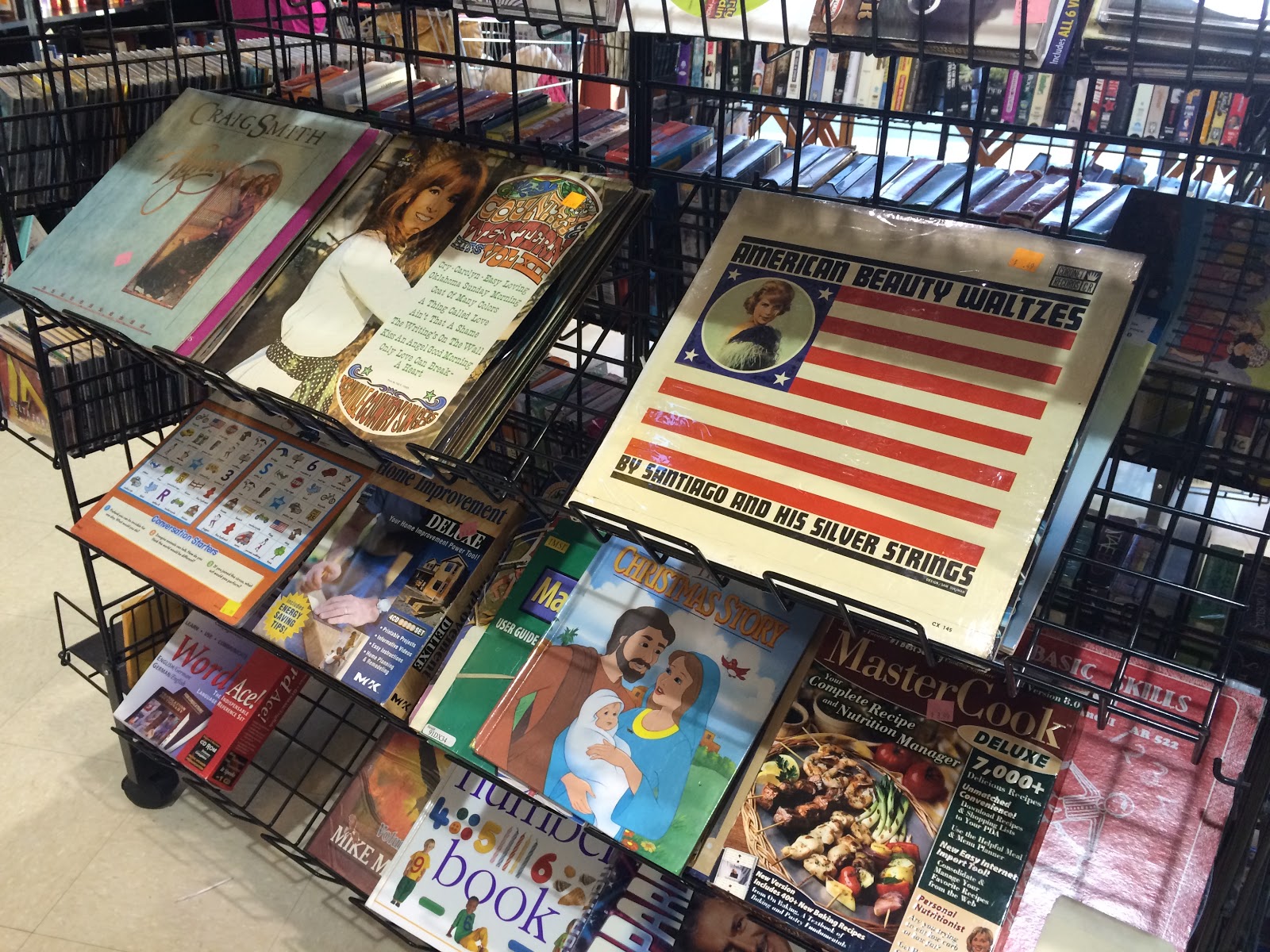 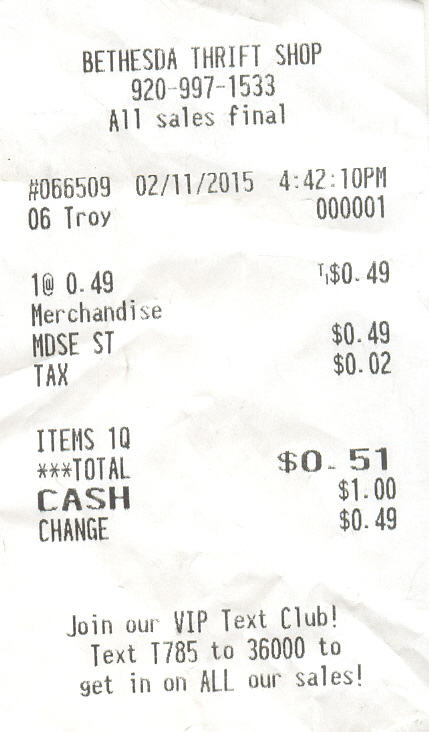 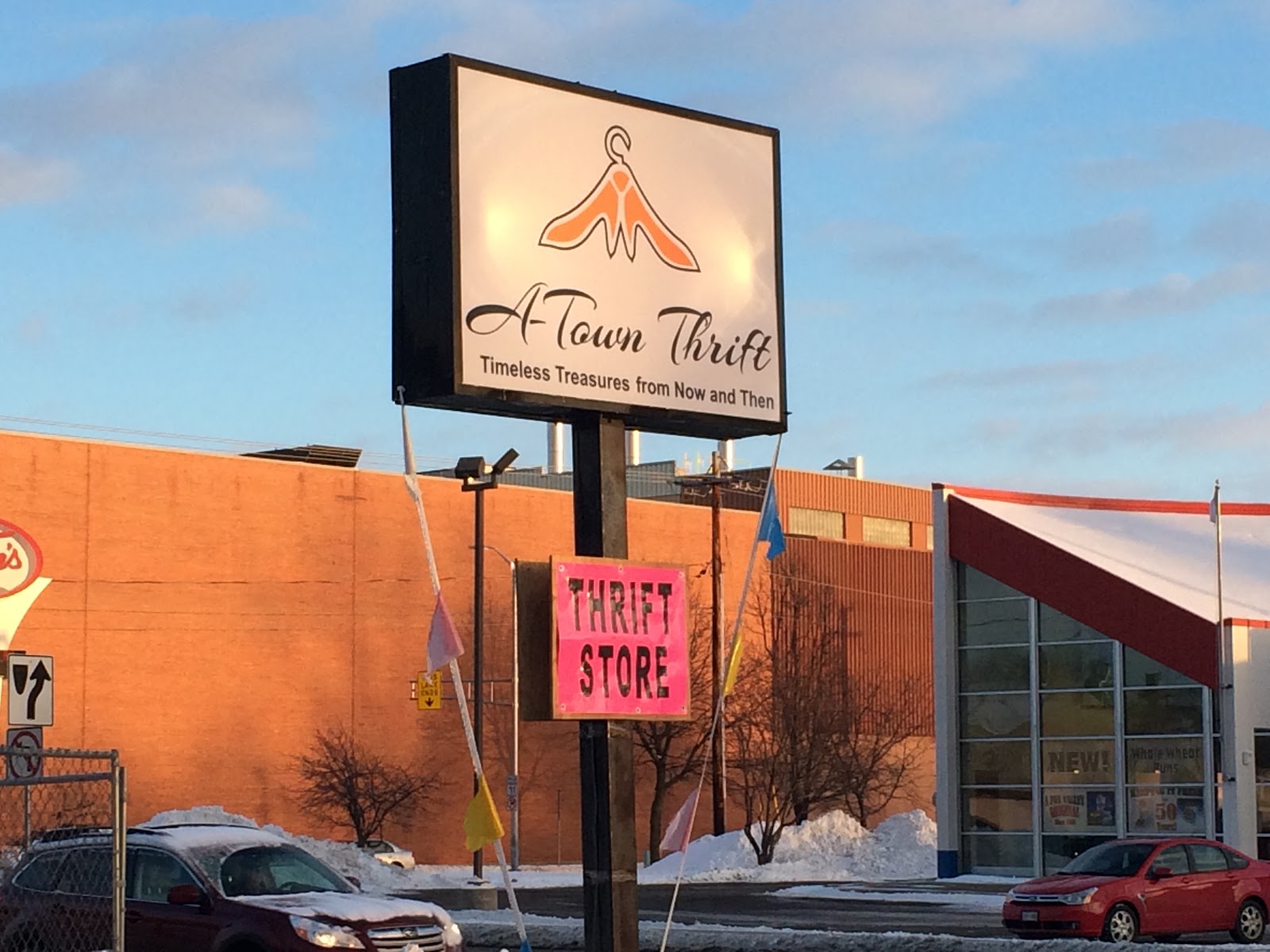 I neglected to take a photo of the 3-4 crates of vinyl at this location but as I came away with nothing, no loss there. 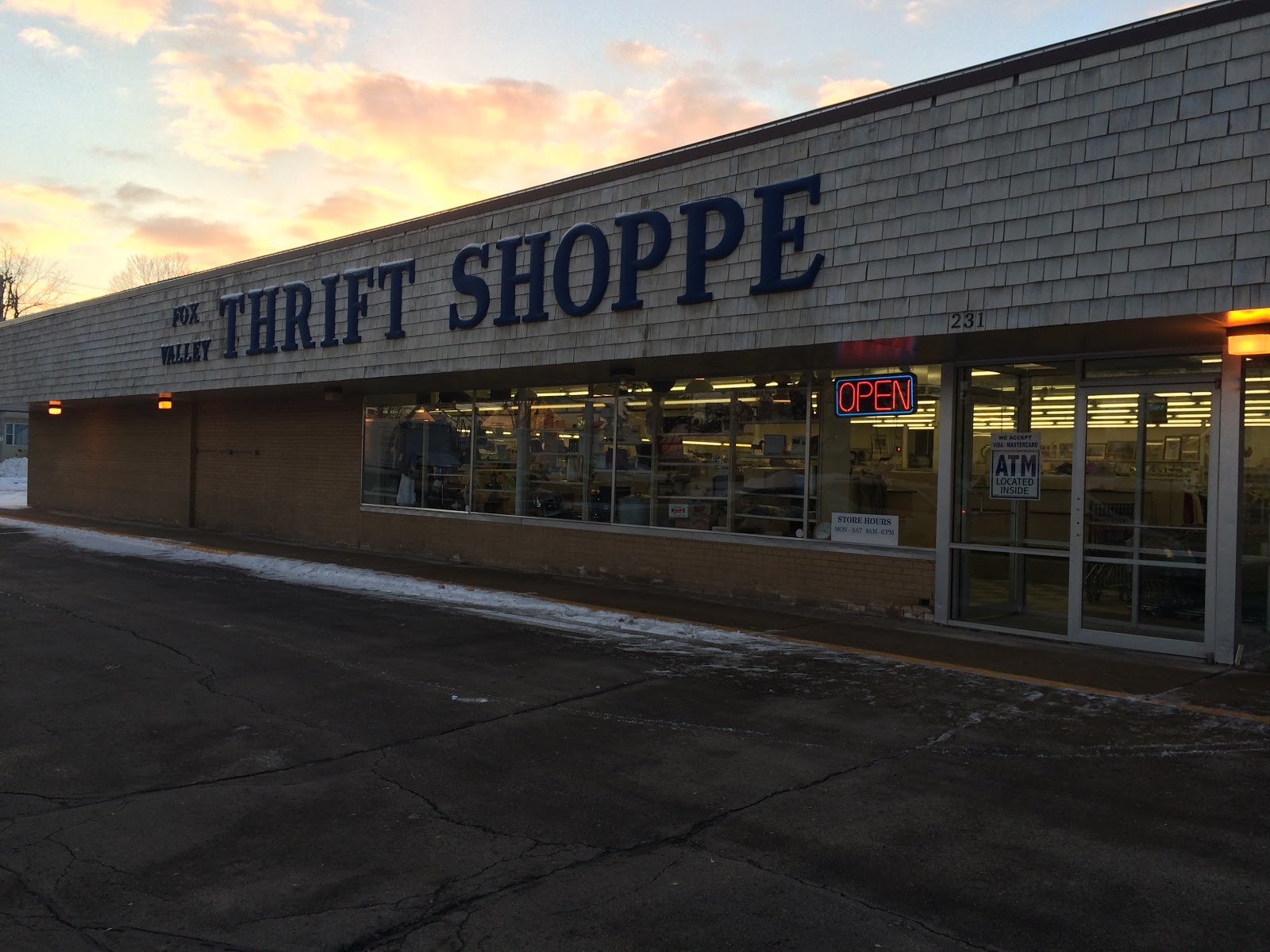 I struck pay dirt at this place.  I came up on an early Engelbert mono variation I can find on neither discogs nor ebay...its been around but it will suffice at least until I find another one (if I ever do).  I grabbed yet another Ray Price LP in very nice condition (I will be working on his discography for many years to come).  Then things got interesting.

I have not ever and swore I never would...but I contemplated buying a record sans jacket.  A few weeks ago I grabbed a cheap K-Tel 80s comp and I found another one here, equally as cheesy.  That being said, I have spun the hell out of the one I already have so I really wanted this one.  I even dug into some other junk record and stole the inner sleeve so my new platter had some kind of prophylactic until I could get it safely home, nearly 400 miles away.

I brought my scores to the counter and was told that they could not sell me the comp as it was not priced.  I understand the store policy, and I understand the motives behind it but I figure this would be a great time to price it right then and there.  I asked bluntly 'so you don't want my money then?' and just got a blank stare with another iteration of the policy.  I took the other two after paying and got the hell out of there.  Oh well. 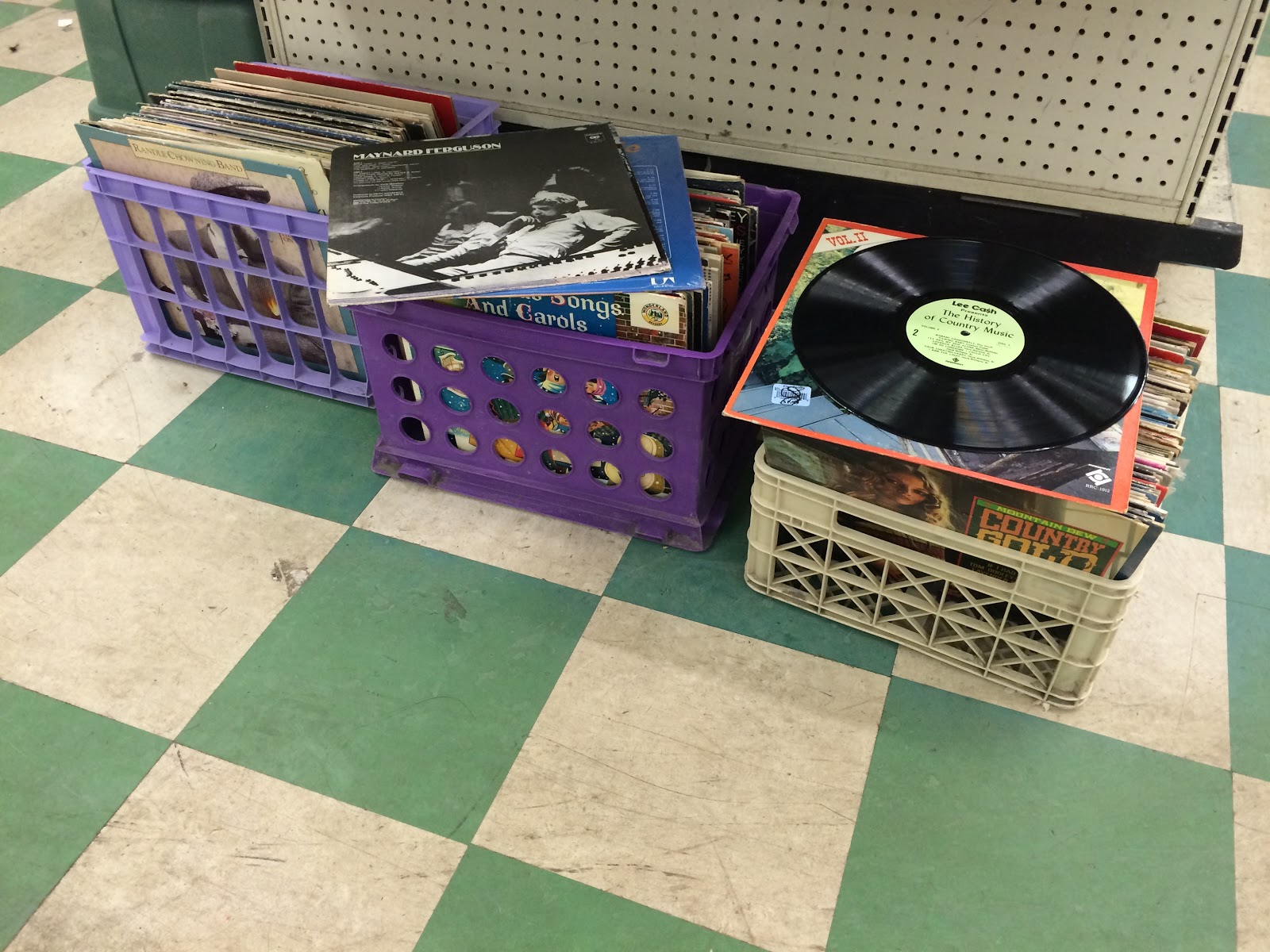 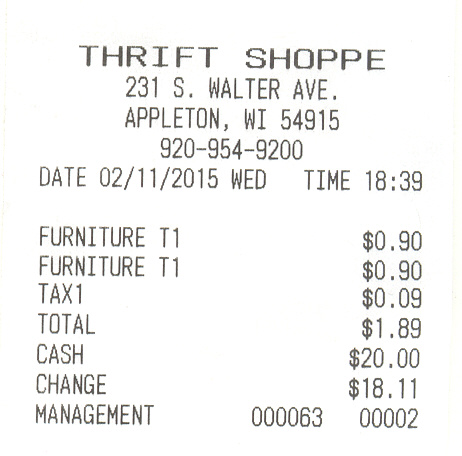 I visited here once before last spring and the ridiculous 10 cent record sale is still in action.  I was headed to my hotel when I drove by and remembered the place...figured I might as well stop in.  Glad I did.

I found my 2nd barbershop album in a few hours, this one never before seen.  I have done massive independent research on the Decca Top 10 Quartet albums released annually since 1953 but I had never heard of a release with this scope before.  Inner sleeve still in tact - this was a no brainer for 10 cents or even 10x that.  I also scooped a 2xLP Eng comp for my girlfriend (found my own copy last summer at a garage sale). 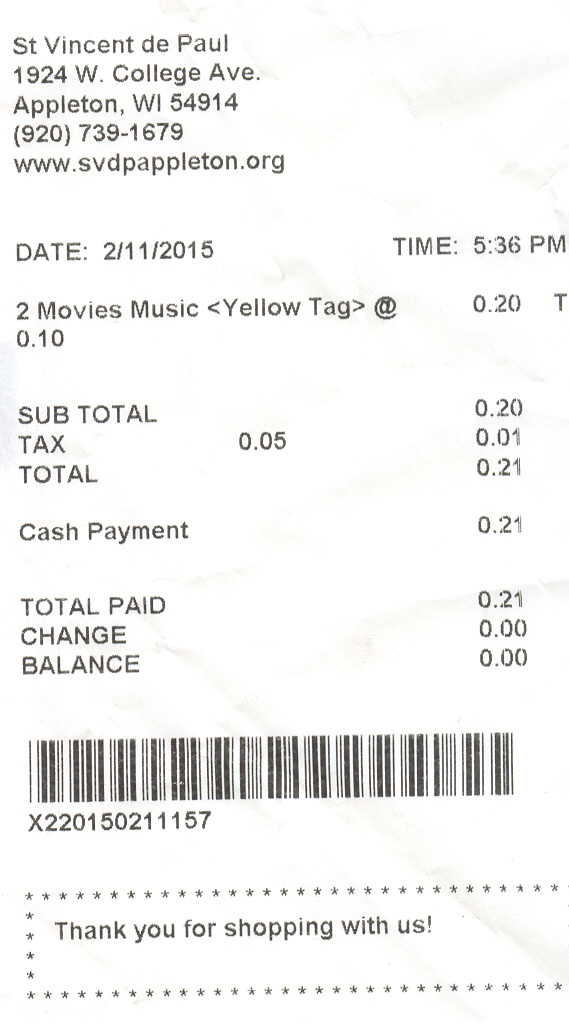 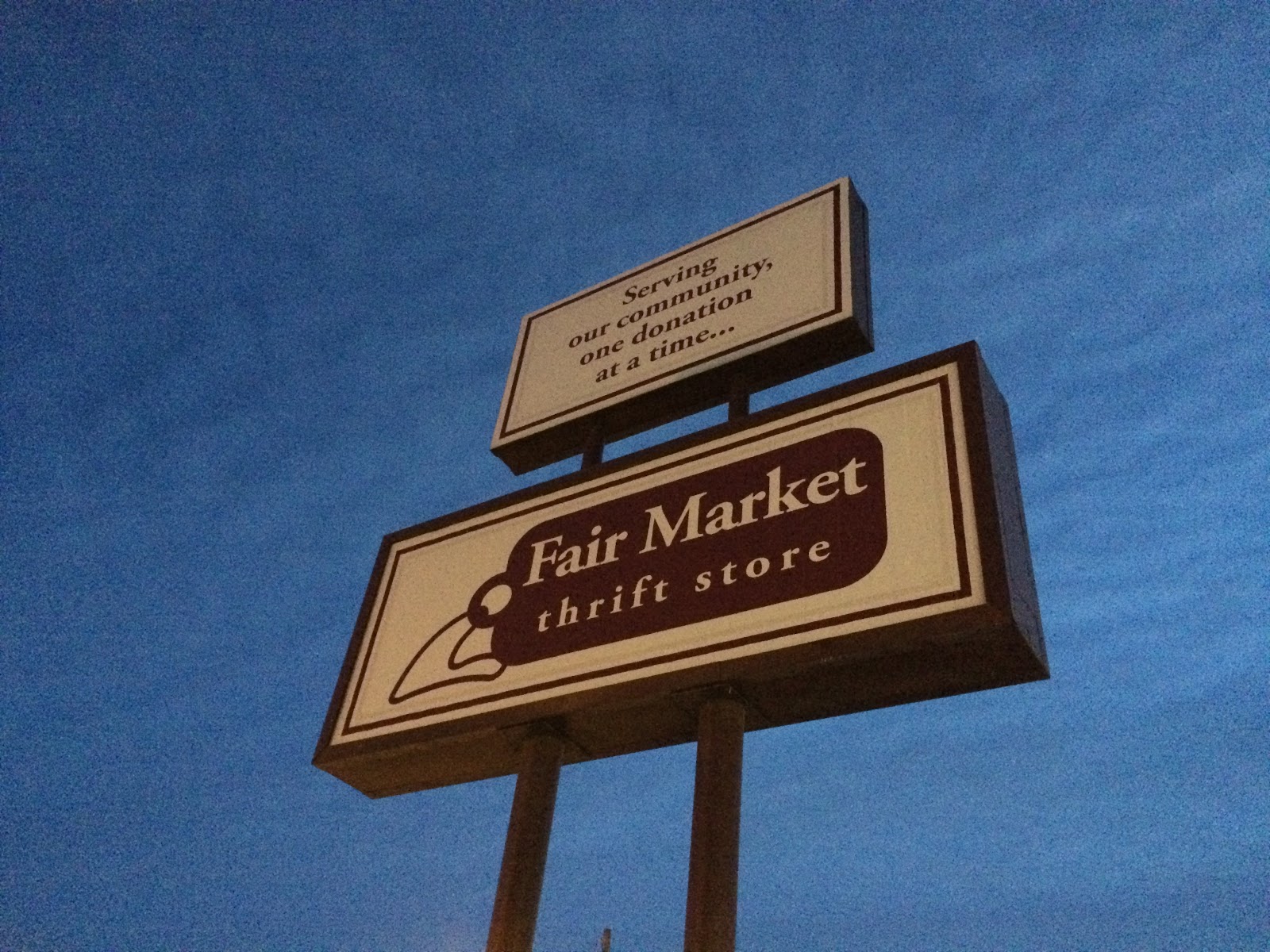 Never willing to leave well enough alone, the 4 stores I hit the day previous were not enough.  I did not think I would have any time to explore more (or anywhere to go, for that matter) but I got stuck up there another night.  I called this place in advance to make sure they had records and sped over, getting in about 15 minutes before close.  Nothing worthy of a purchase unfortunately but still worth the trip. 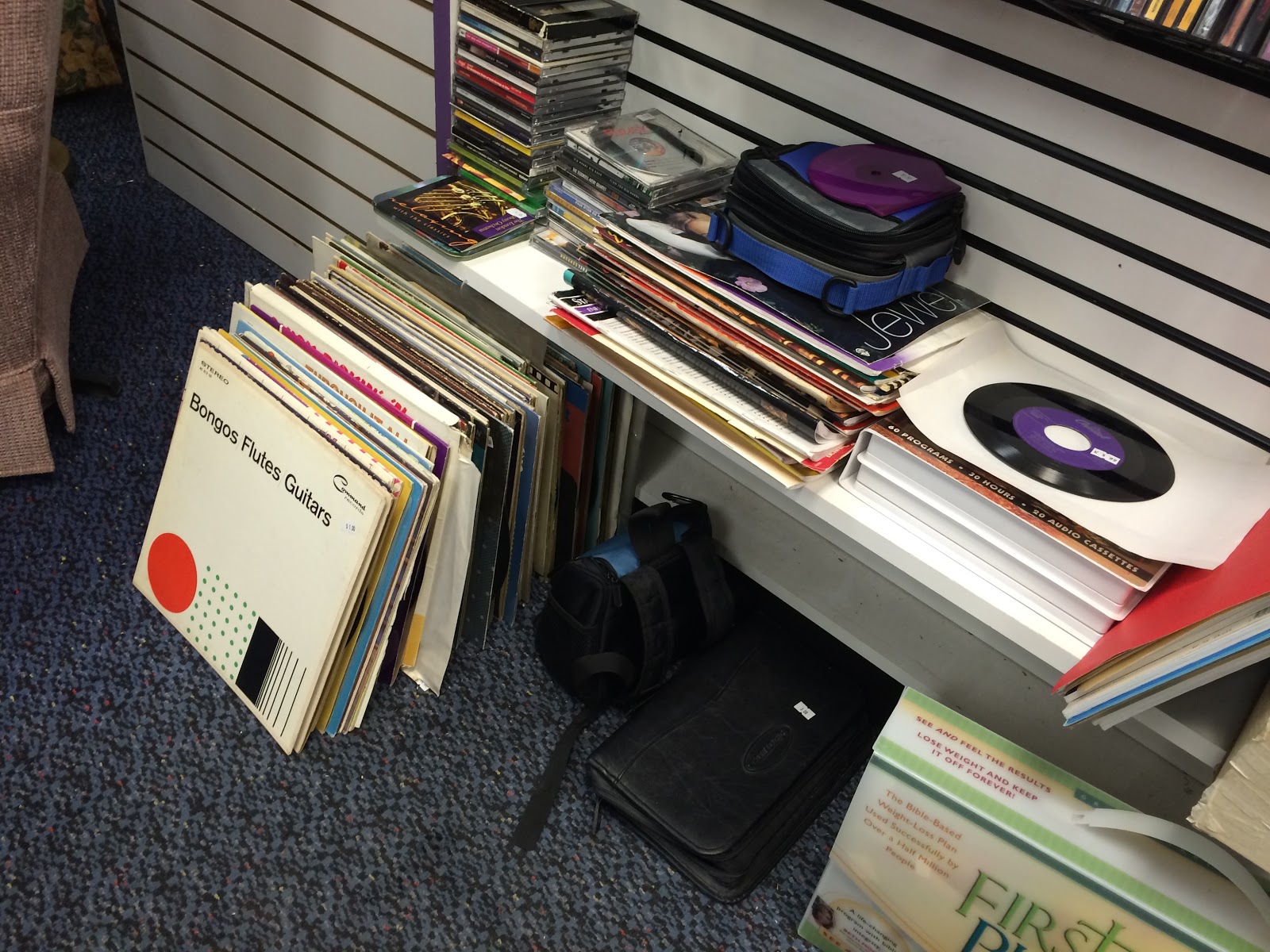 I noticed this place on the way to Fair Market so I swung through.  Unbelievably found yet another barbershop classic, this one especially worthy of note for the appearance of the 1973 champs who have no full length of their own that I know of.  Better yet is track B4 which was every bit as good as I thought it might be.

Hammond Salvage and Resale [Hammond IN] 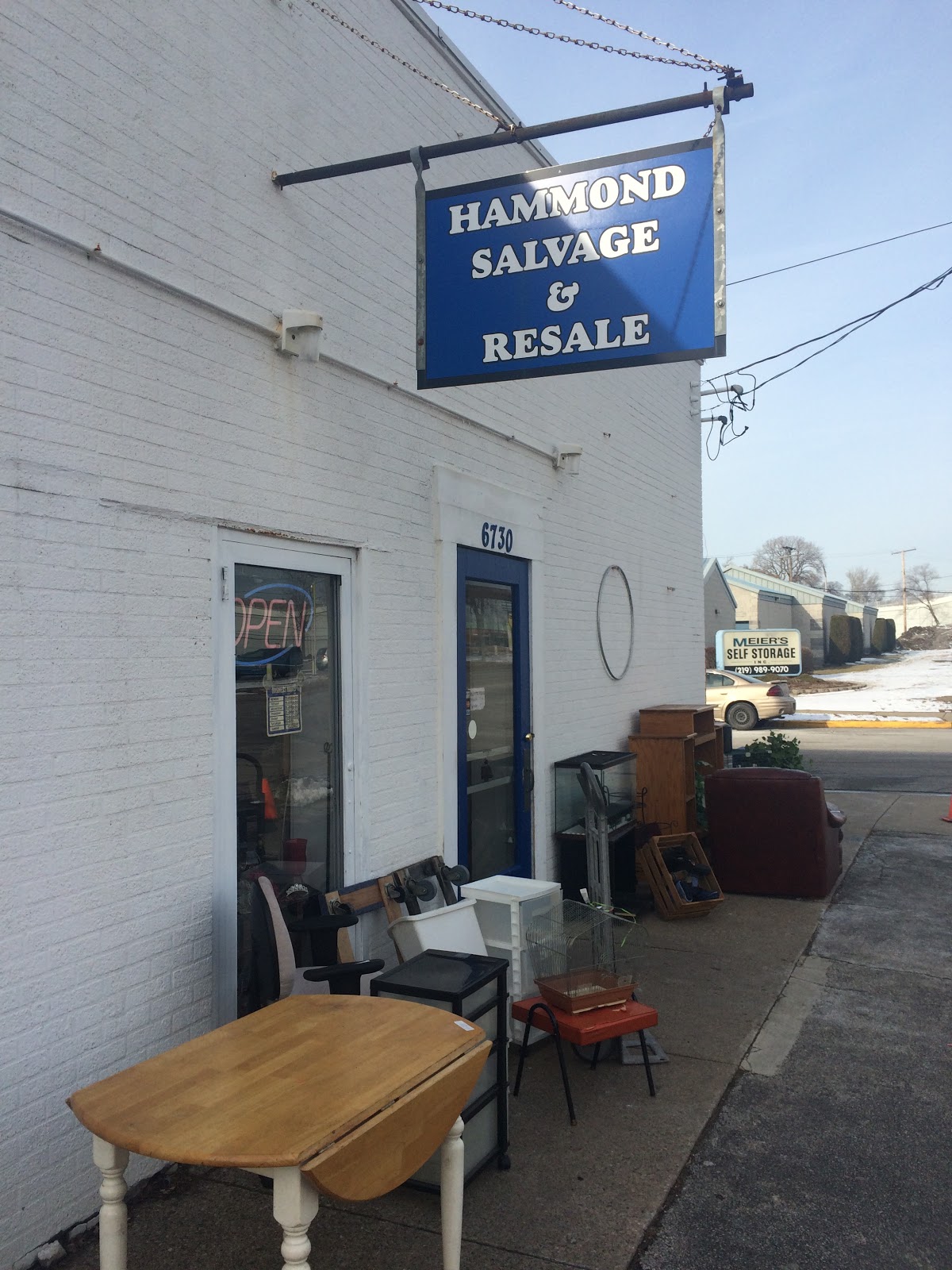 During my second trip to Hammond in about a month, I planned to make time to check out some vinyl in the area.  I initially drove to a Salvation Army in East Chicago - only to find that it was basically a soup kitchen and had no thrift store.  I awkardly aborted mission and headed over to a St. Vincent's (which I later learned did not exist) when I drove by Hammond Salvage and Resale.  After a couple seconds of pondering, I slammed on the brakes and pulled over to check it out.

I asked the clerk if they had any records and she pointed into another room about 20' away.  I could see from there a small rack of vinyl and I was pleased I hadn't stopped for nothing. 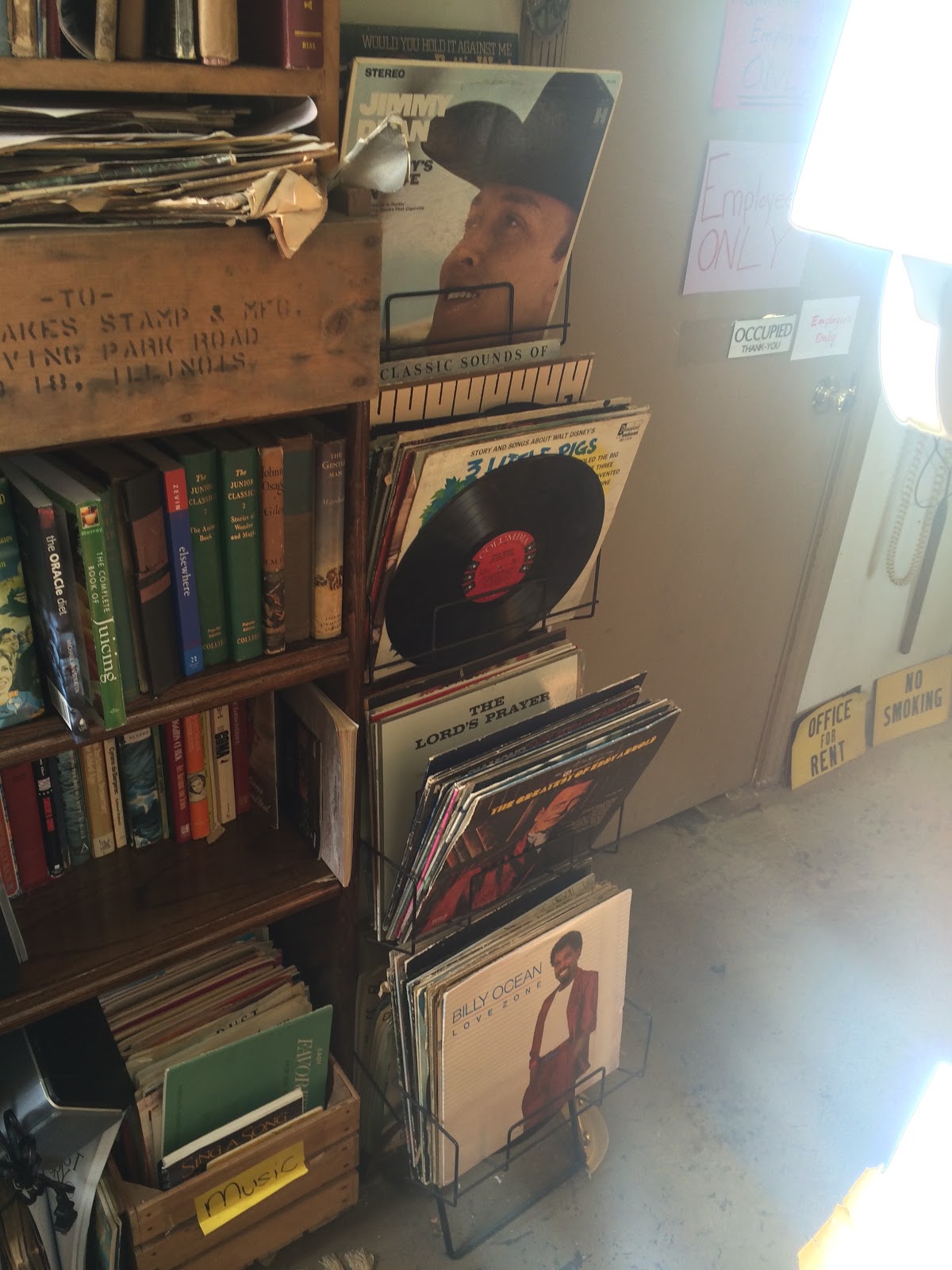 I checked out the rack and saw almost nothing of interest.  I wasn't totally bummed and I was about to leave when I noticed there was another rack nearby. 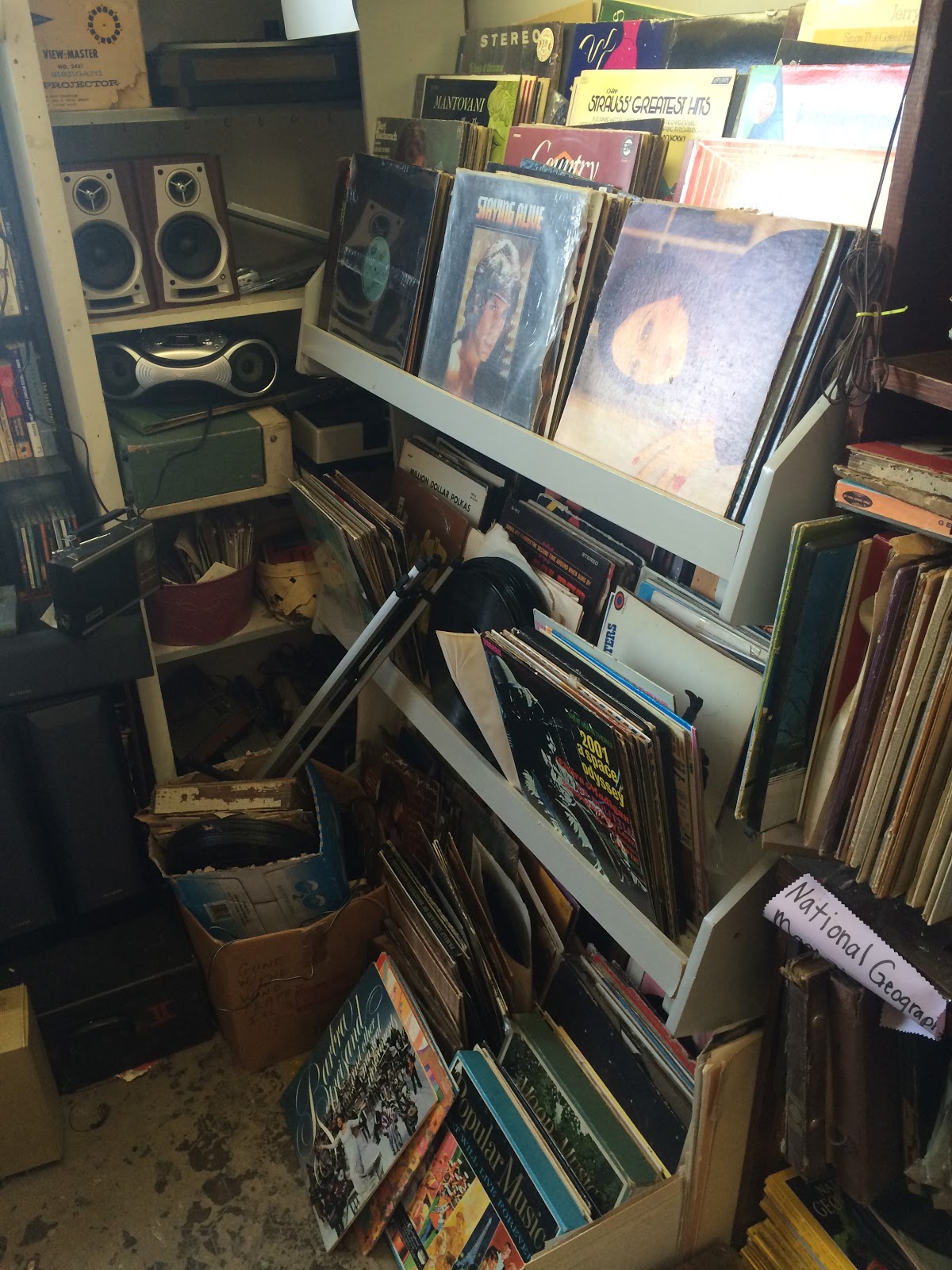 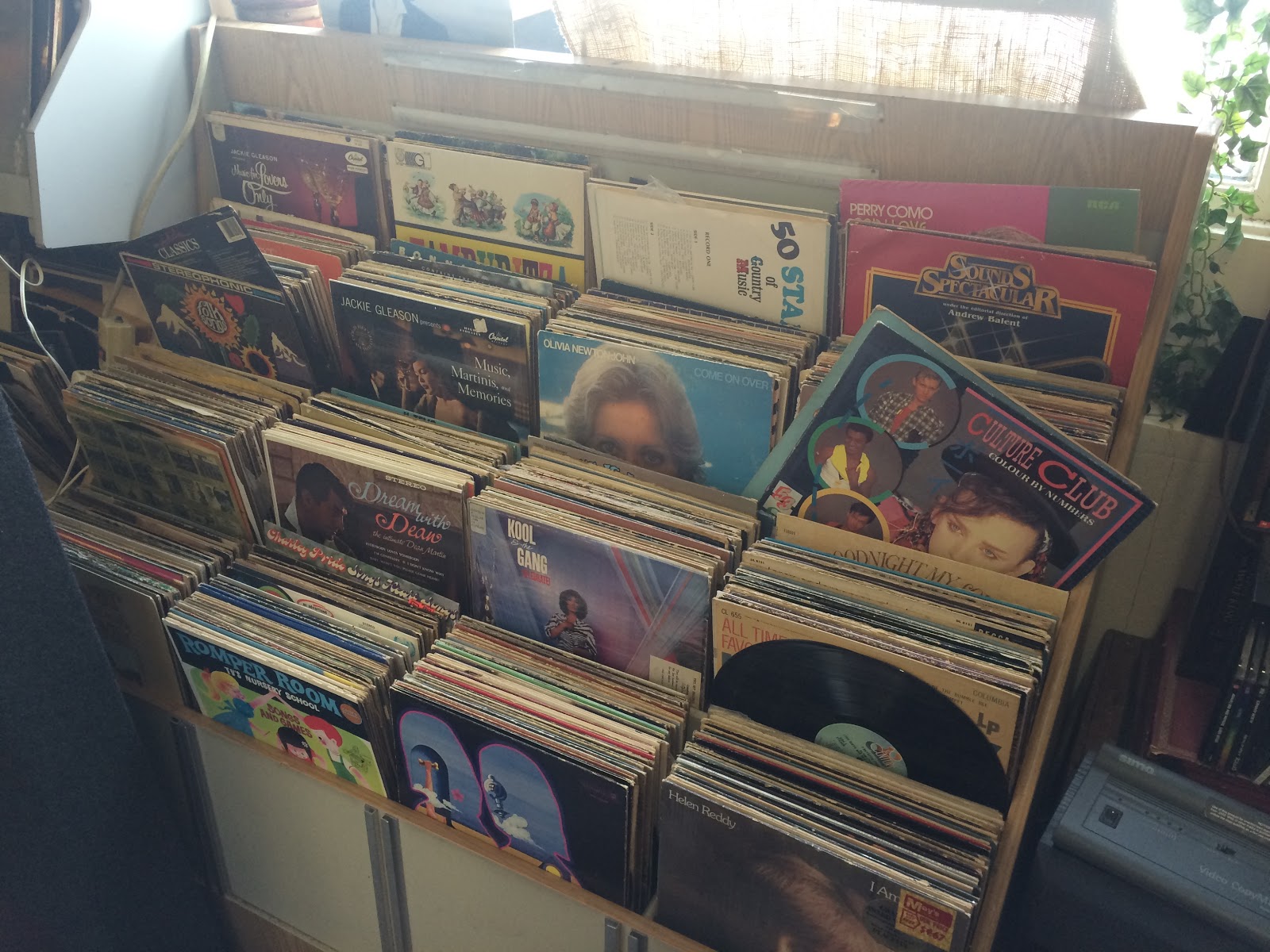 All of a sudden I realized that I had some serious blinders on.  The entire room was jammed with vinyl, and I do mean jammed. There was piled and boxes on the floor.  There were magazine racks stuffed with vinyl so you couldn't see what was behind record without bending the one in front of it at painfully acute angles.  There was bookshelves brimming with 7" and 12" records with no sleeves at all and even two large record bins - with more piled on top to boot! 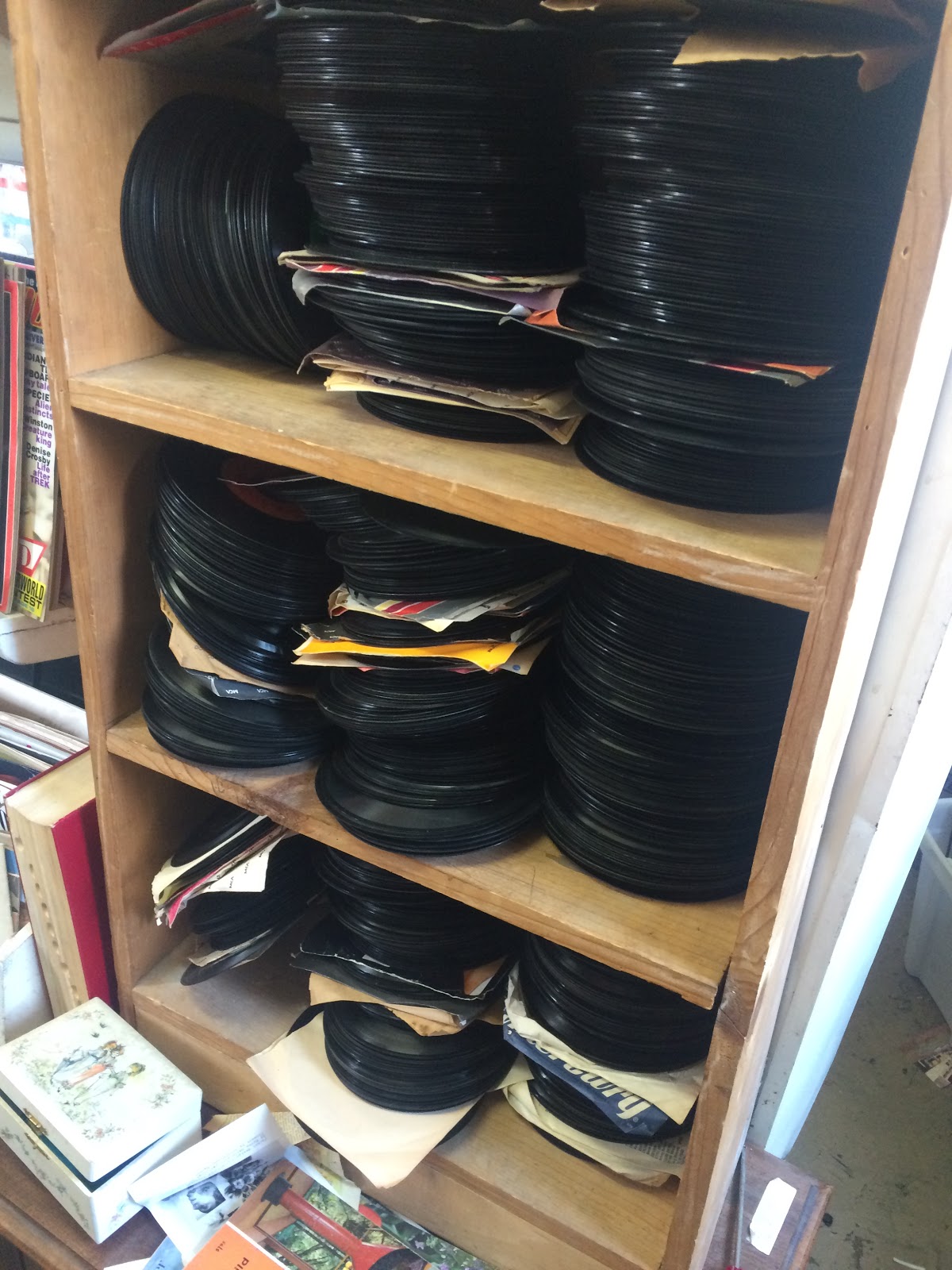 I settled in and got to looking.  It wasn't long before I started accumulating a serious pile to review - I only did 'catch and release' on a couple and I still walked out with quite a haul:

Ray Price - She Wears My Ring
I swore a while back I would stop looking at Ray Price records but I am addicted.  I came across a couple others I already had but I have never seen this before.  It is in staggeringly good shape considering the rugged environment it has been living in and contains some excellent standards of the era.  Regrettably, I already have the tracks of the greatest interest on a comp I grabbed a while back.  No matter - I never started collecting records to be that efficient.

Baja Marimba Band, The* - Those Were The Days and Watch Out!
I was able to grab two additional A&M releases in one shot - my long delayed journey to collect the 10 piece discography is already half done as I just purchased another on ebay with a larger lot of vinyl.

Eddie Rabbitt - Horizon
With pop records of old, I often play a game where I see the cover, then not knowing the tracks that lie within, I give myself an ultimatum: if it is the record I think it is (contains hit(s)), then I will buy it.  If not, back into the bin it goes.  This has two blockbusters but the other tracks are equally as accessible and excellent.  I listened to side A twice back-to-back this morning with my coffee.  Better yet - it is the Mexican import version.  Also a rare find in that the original sleeve with lyrics is intact.  It is not ripped - the seam came unglued.  I see this with some regularity on jackets, but rarely on sleeves.  I shall reglue it this morning when my blogging is done.

Trilly* - Just Trilly
Many months ago, I came across a really bizarre record which I left behind at a Goodwill.  I know I will be back that way eventually and I surely will stop again to grab it.  Until then, I exist as a tortured man but at least I learned my lesson.  When I find records on that level of strange, I never leave them behind.  While the Polka Teens record best quality may be that it is rare, this one is actually good. I can still find only fleeting info on the net about Trilly Cole but this is a great record and a live recording as well.  Her banter is comforting in some way via her accent and the song selection is great.  Best of all - there is an 'I'M A TRILLY COLE FAN' bumper sticker within which is now pinned to the backsplash of my record rack.

Mr. Acker Bilk* - Stranger On The Shore
Months ago on my annual pilgrimage to the Sunshine State, I got wind of a conversation between an elderly client and the proprietor of a store I visited.  He was searching for a record he knew by title, but did not know the artist.  I later learned what he was searching for, and I found the record he desired myself and did not hesitate to grab it.  Best of all, it is the original pressing in mono.  Proud to have this in my collection.  Old timer - this one is for you.

I came across another thrift store on my way back to the expressway on my exit from Indiana and had to stop.  'Almost Anything' surely did have just that - including a giant mass of records.  However, never before have I seen such a wild mess of vinyl, totally innavigatable.  I honestly never before dreamt of the horrors of milkcrates PACKED with naked vinyl, their jackets and sleeves long since discarded.  The place was dark and dank, it was terrifying.


My mission fufilled I headed back to safer territory where records only reside in wonderful plastic sleeves, stored upright and never crushed like old beer cans.  A trip of polar opposites and great scores.  Enjoy the mix below culled from the records I brought home. 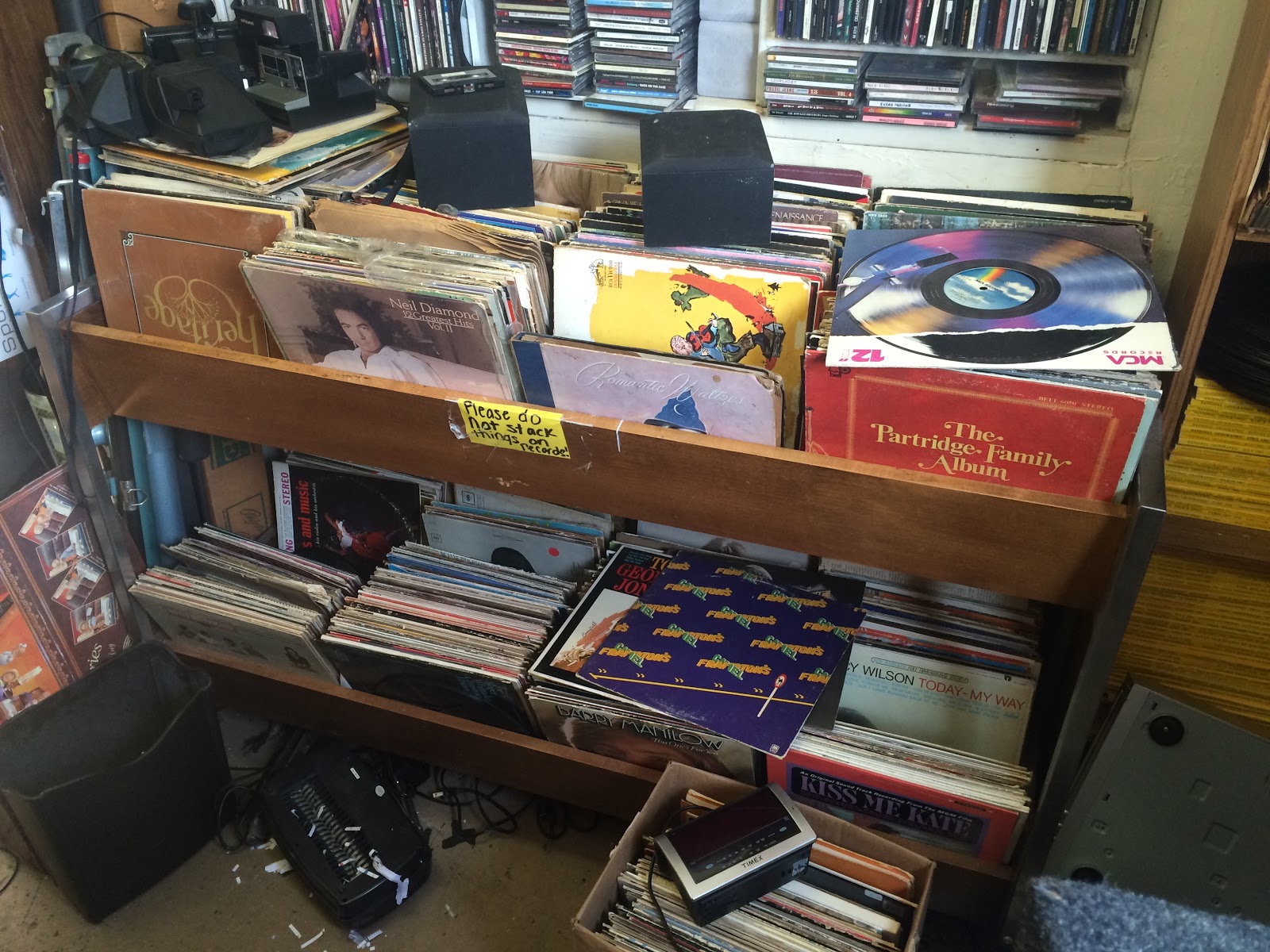 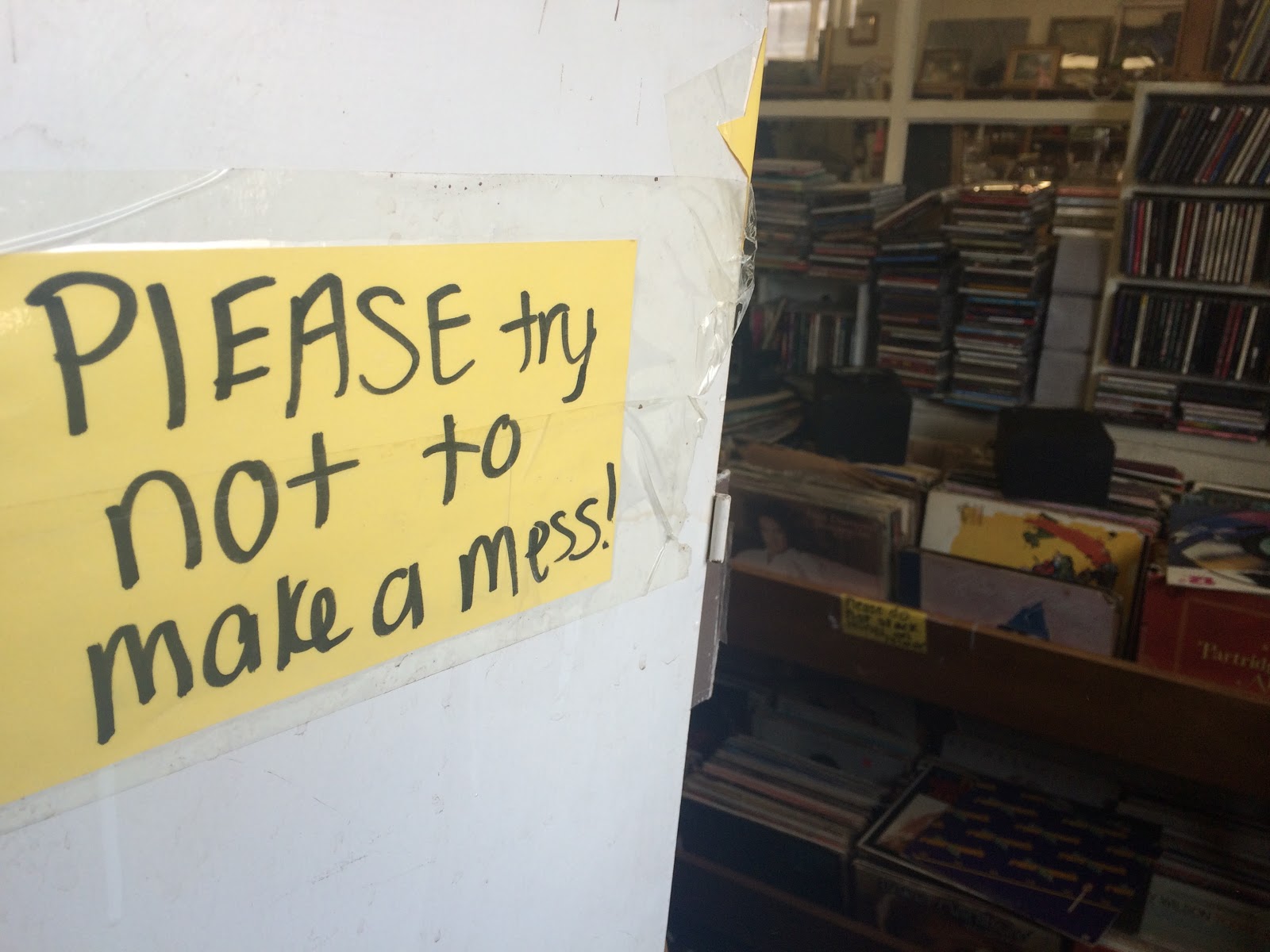 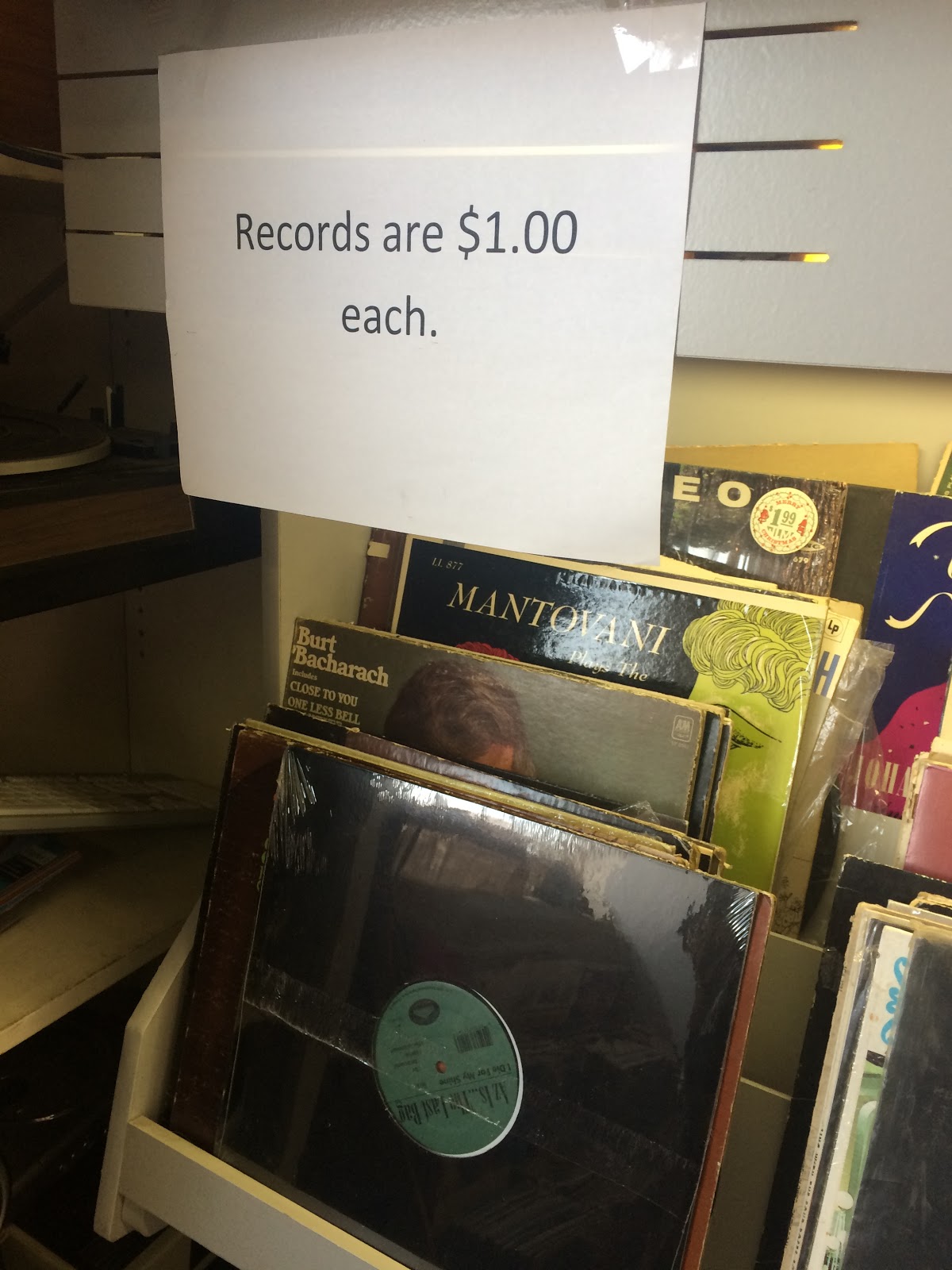 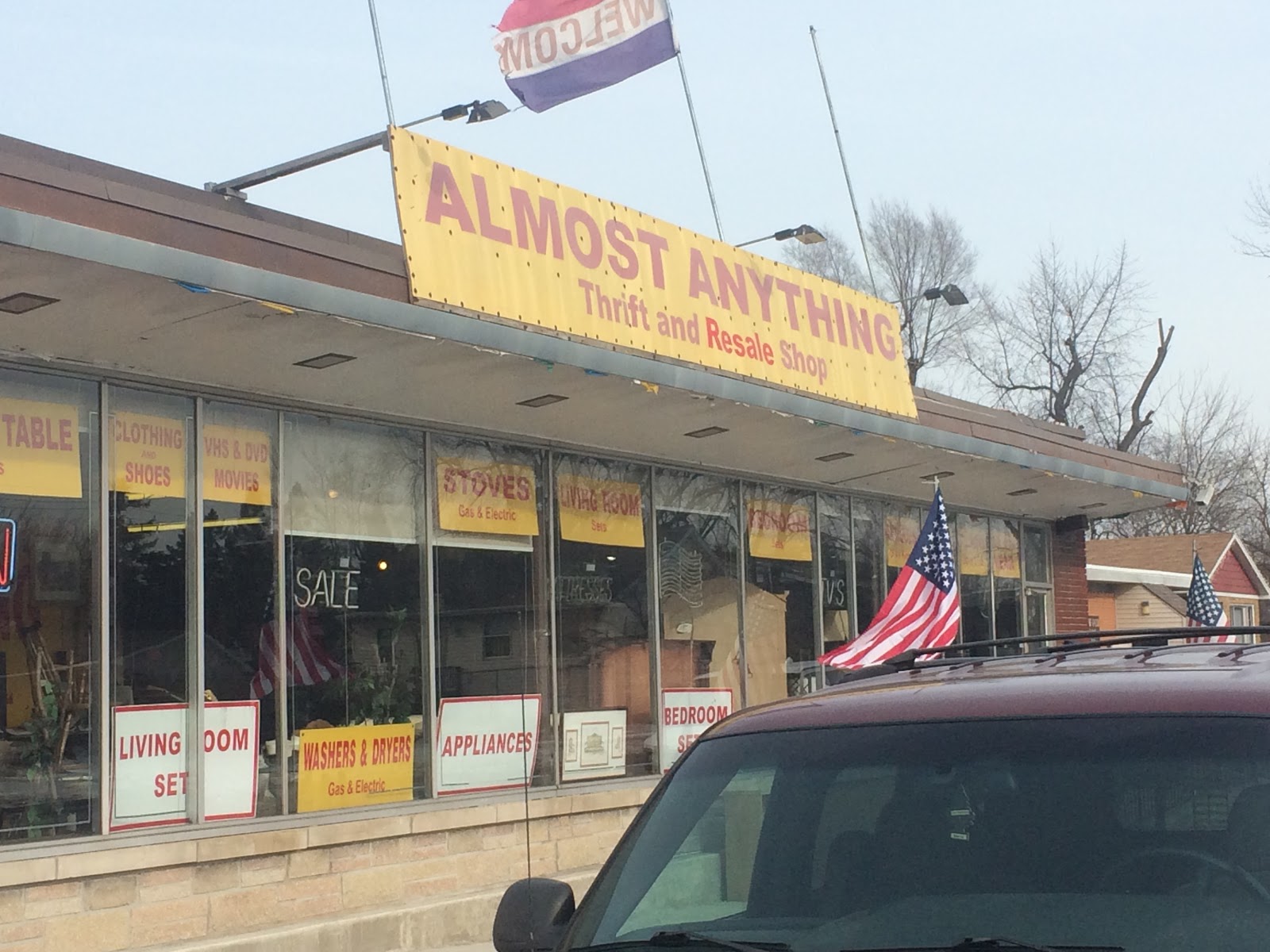