As of today, I am at 427 LPs.  When I was a few under 400 I started to think about the future, and what I would have to do to make more room.  As is always the case, the most wasted real estate is always above your head.  I started to think if there was a way I could expand my current 4-bin rack and mount a 'hutch' atop it.  And I decided that if I did, I would go clear to the ceiling so I'd never have to deal with such a dilemma again. 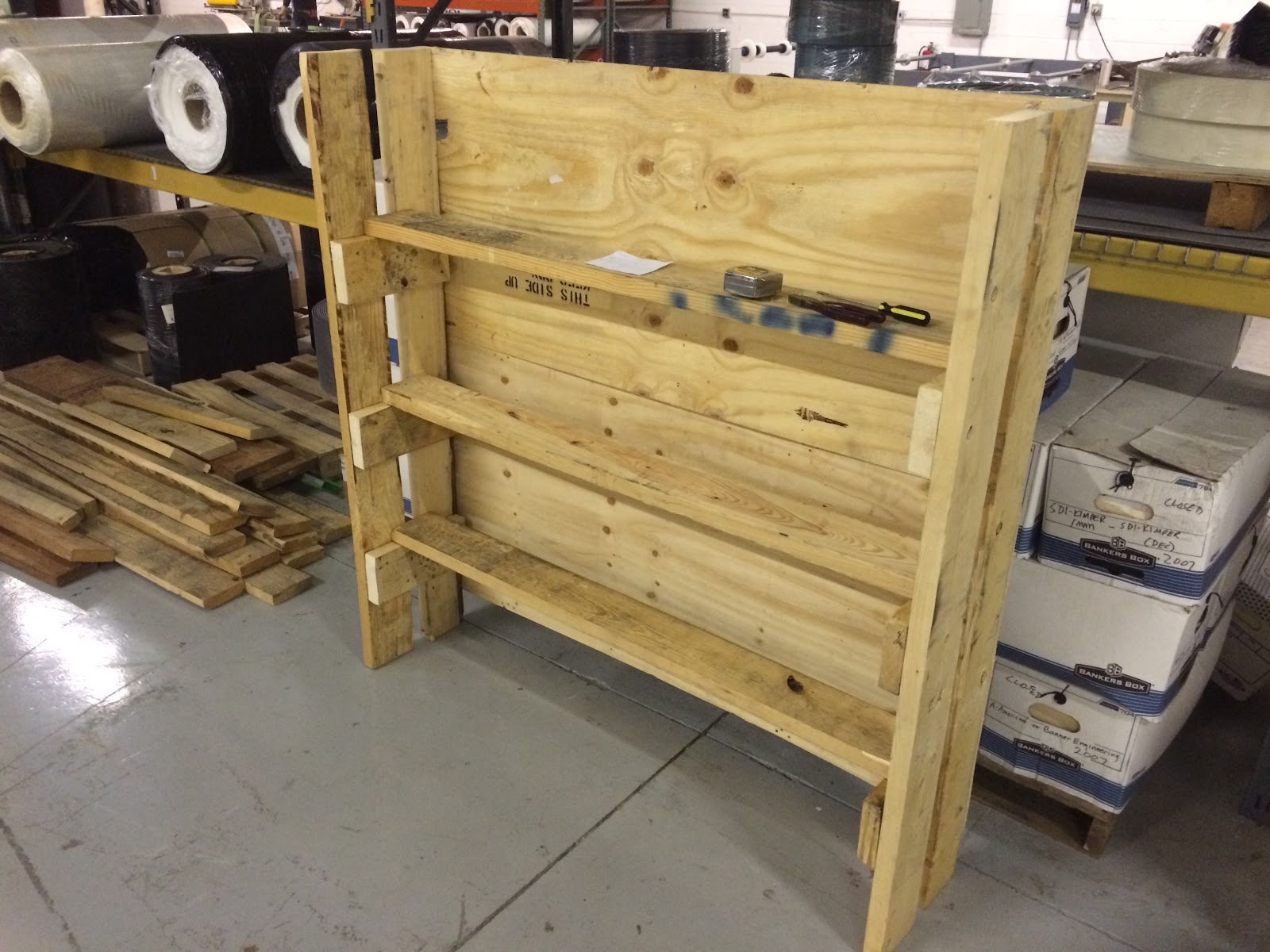 I built the sides like a ladder so the support for the actual shelves would be via gravity, not fasteners.  One dimension I forgot to add to my sketch was the depth of the rack.  Turns out it is about 17" but I was not willing to put off construction a day so I played it safe and built it at about 13".  I opted to use a single 2x6" for the shelves with a plan to cover them with plywood to increase the area the records had to sit on.  I was confident that the 2x6s had enough tensile strength to support what I estimate is about 300 LPs at that width. 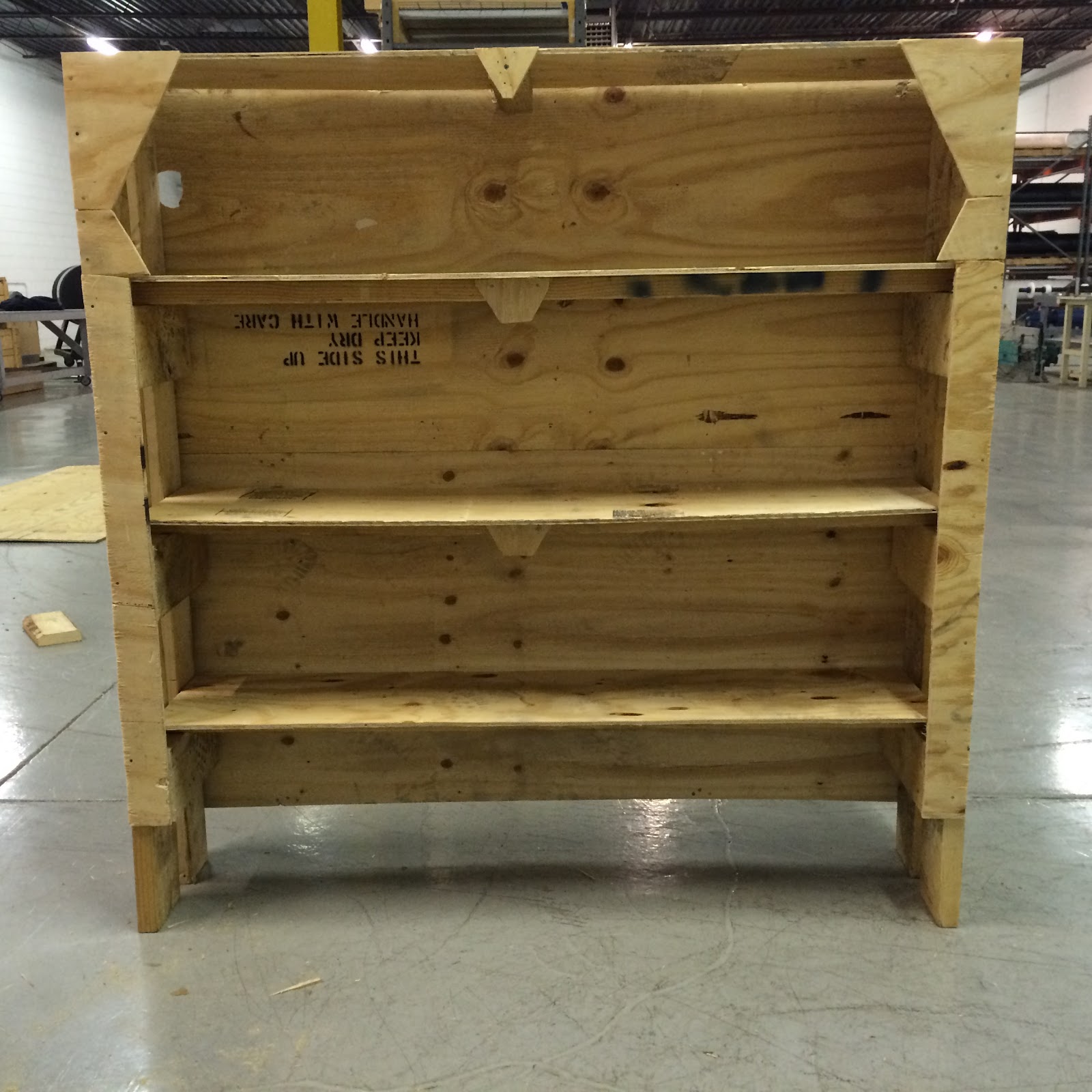 On day #2 I added a 'roof' to the hutch.  Like the plywood backing (something I've never done before), I decided that it was as much for stability as aesthetic.  For the first time, I used nails to hold all that stuff together instead of screws.  Then I started to have some fun and add trim to the hutch.  The long pieces on the sides were necessary to me - the visable joists were just ugly to me and I knew I had to do that.  But after that it was just getting creative.  All the angled pieces you see are 60 degree because I had a fixed angle available at that degree.  What look like supports (with the triangular endcaps) in the middle of the shelves are not, but they also are not strictly cosmetic.  The plywood backing is actually two pieces and the top piece was badly warped and was arched outwards about 2" at least.  So the 'support' you see is actually being used to pull the plywood back inwards, flush with the sheet below it.  Then I noticed that the lower sheet was actually warped also (but much less).  So that support was used to push it out just a touch so everything was flush.  The third one on the top shelf is entirely cosmetic.  I am just a little bothered that I did not add a 4th for the bottom shelf but too late now.  This step of the project was my main expense - I bought two sheets of plywood for the shelving, the roof and all the trim.  By cheating on the shelves and making them about 1/2" not deep enough I was able to not use the second sheet and return it which was nice as they are about $25 with tax.  Even the paint was free - abandoned by contractors that did some work in the building many years ago.  I could not believe it was still good after a vigorous stirring. 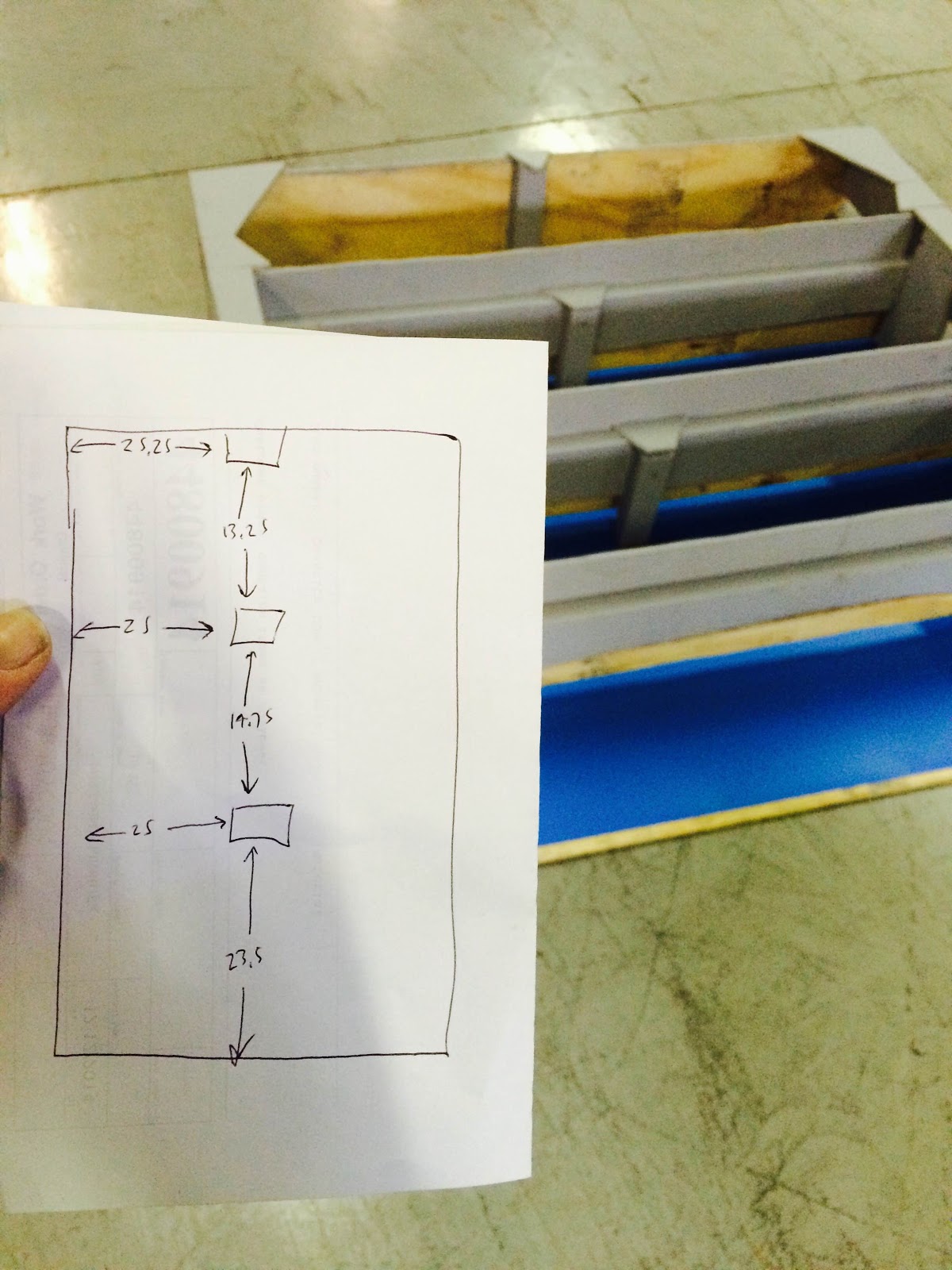 So I covered the plywood backsplash with blue urethane fabric I had laying around.  The supports were fixed and in the way so I could not just slide a sheet in.  So I notched them out, then made a slit from the top down to the top of the 3rd support so I could open it up and slide it in from the bottom and prevent having to have two entirely separate pieces.  I did have to put it in then remove it for modifications and replace it which was much more of a wrestling match then I predicted but worked out fine.  I fixed it in with a heavy staple gun. 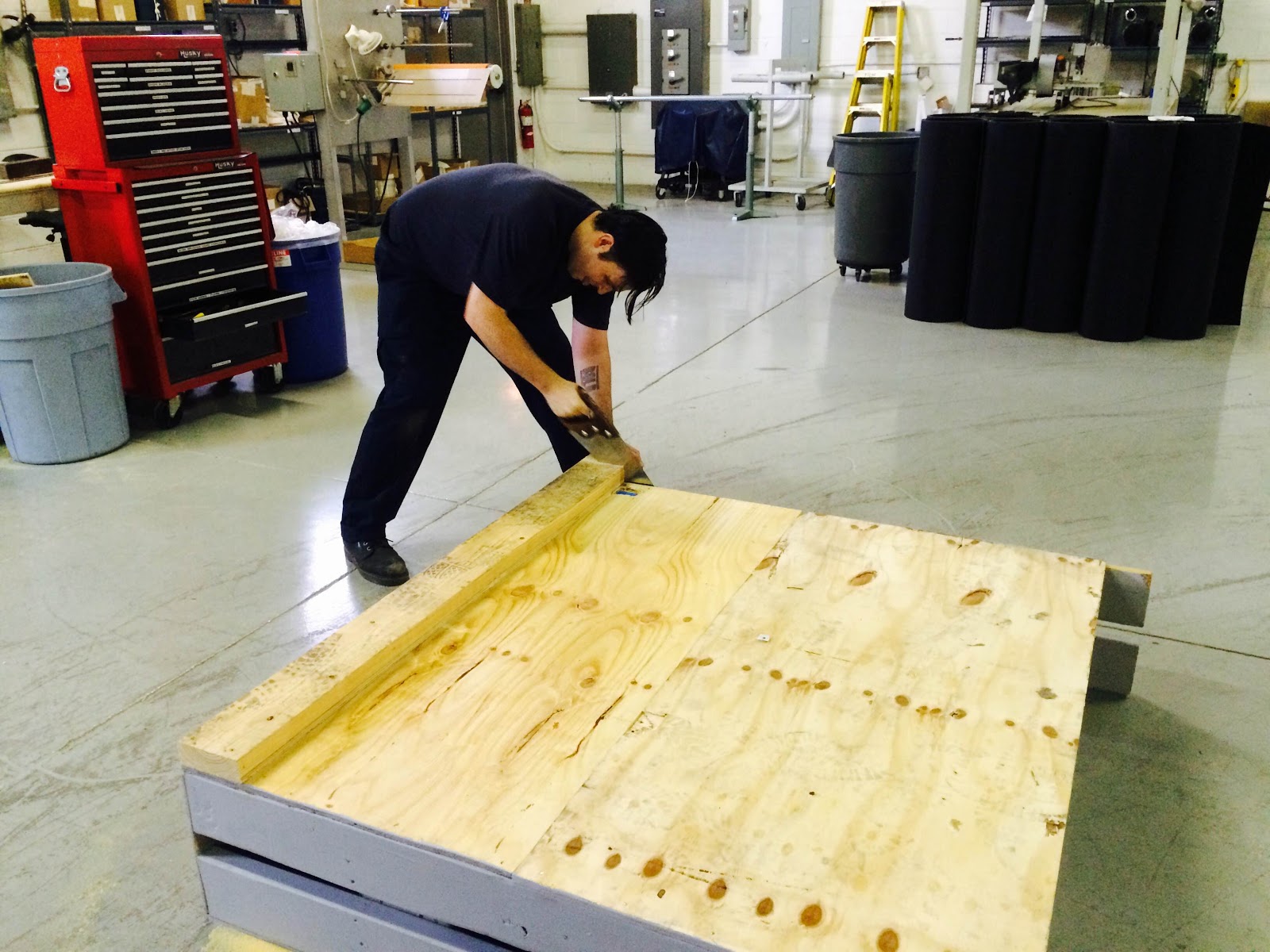 I had thought early on about how stable this would be with an estimated 900 records on it and decided before long that it needed something to prevent a tipover.  I was convinced it was built square enough that it would stand tall but it towers to intimidating levels and I'd like to protect myself and my guests as much as the records themselves.  Initially I searched for a stud (with a stud finder, then a drill) before realizing that this wall was some kind of an old school all plaster wall with no wood lath.  So I decided on a gigantic toggle bolt to hold it in place.  However there was only the backsplash to drill through to hold the hutch to the wall.  It is just plywood and only held in with nails to boot - this would not do.  So I mounted a giant 'spar' to the back (another 2x6") with very long screws that went deep into the 'legs' on each side.  To make up for the difference of the thickness of the molding on the bottom of the wall behind my current rack, I cut and mounted scrap plywood to the back of the spar to increase the thickness so it would sit flush against the wall and still be fully upright.

I mounted the spar but had to do this twice.  Stupidly used a torn up 2x6 and only realized how dicey it was once it was mounted.  Had to remove it, then remove the plywood backing and start over with a new board.  Besides being partially rotten the spar cracked from my screws because I had to drill close to the ends.  So when I fabricated my second one, I did NOT cut it to length initially - I cut it AFTER I screwed it on (see pics below - opted to do it via manpower instead of using the sawzall to prevent accidentally tearing up my paint job).  Then I had to cut the holes for the toggle bolts.  So first I cut away with blue urethane fabric (didn't measure, should have and had to cut it again and patch the first hole) then used a huge 2 1/2" hole saw to cut through the plywood on the backsplash and the plywood backing on the spar.  I didn't to have to get an even longer toggle just to accommodate that stuff.  Then I used a 7/8" hole saw to cut through the spar for the toggles.  I grabbed the biggest washers I could find to cover those big holes (the screws themselves are only 5/16") 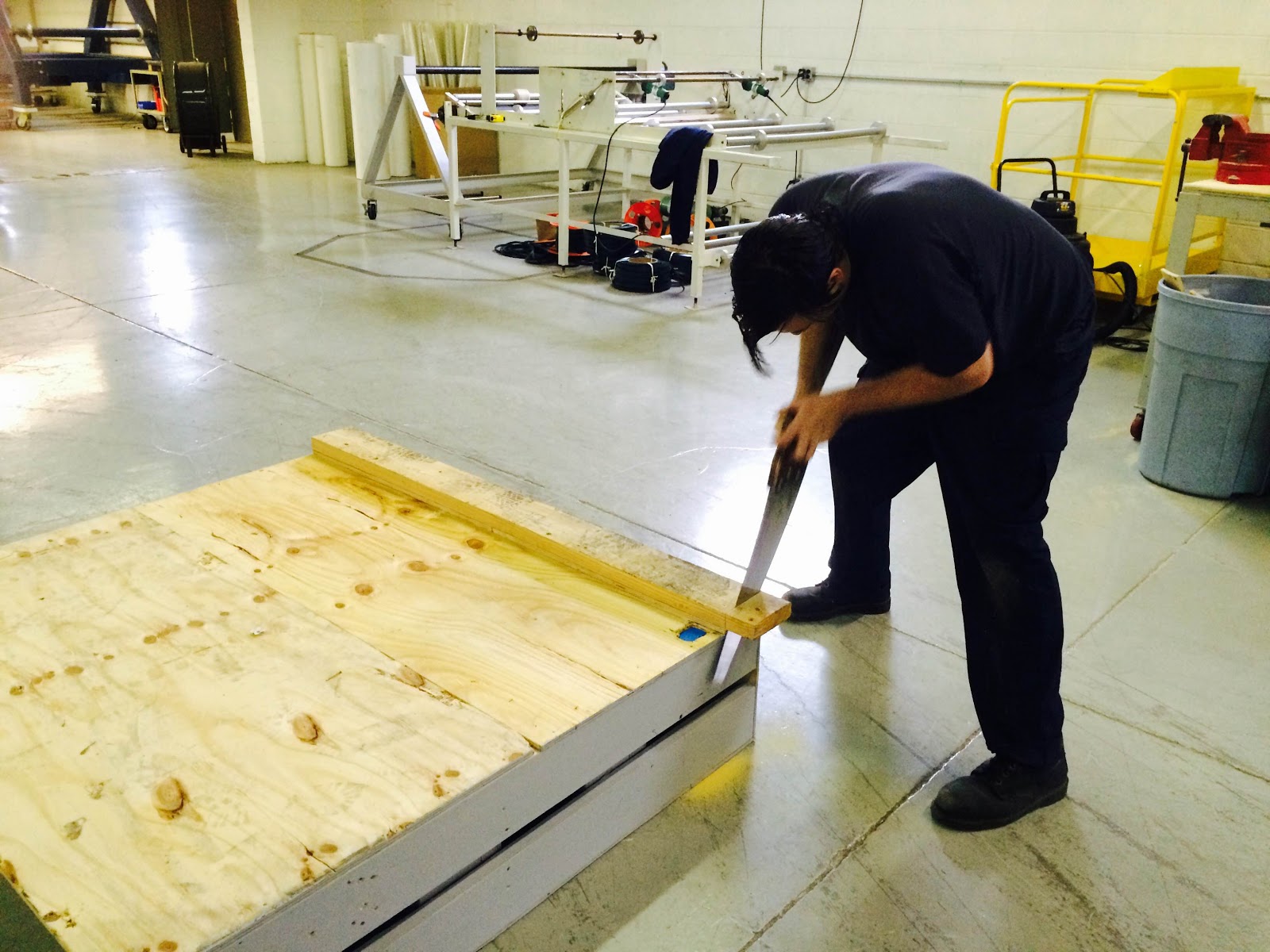 Finally it was time to go home.  I realized then that it was too tall to fit into either the work van or my friends pickup truck (which has a cap).  Luckily, I have another coworker with an old, ass kicking pick up and we got it into there.  I don't know what I would have done without the toolbox he has bolted in there, used a very wide (4") ratchet strap to squeeze it to the toobox.  My first thought was to lay it flat (it would fit) but the humps for the wheels got into the way.  Glad I did not go that route. 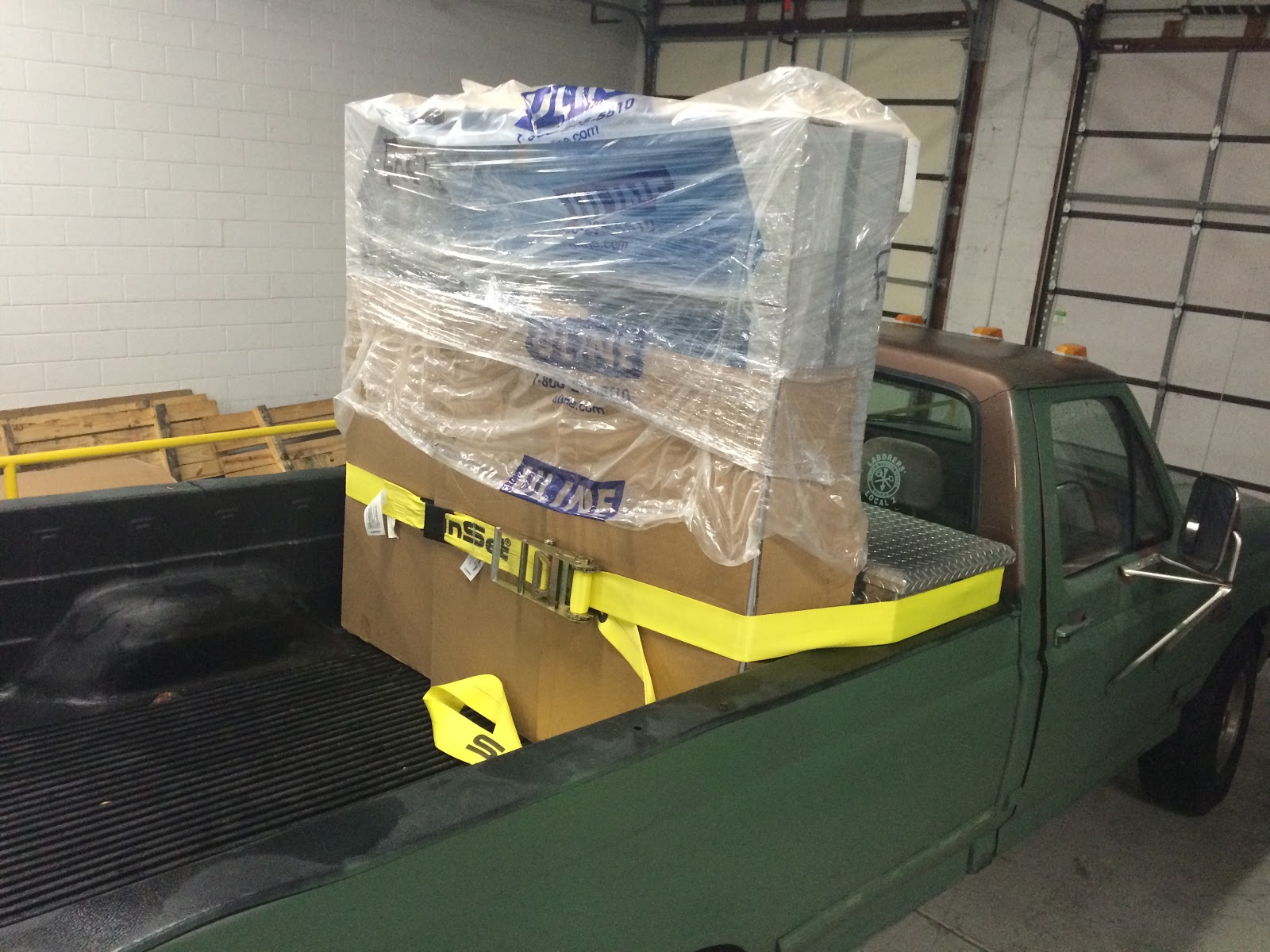 And yes, of course it had to rain on the day we had planned for the big move.  Luckily had some used packing materials around so we covered it up with a big bag, some shrink wrap and some cardboard and it stayed perfectly dry and the strap kept it tied so tight it never budged. 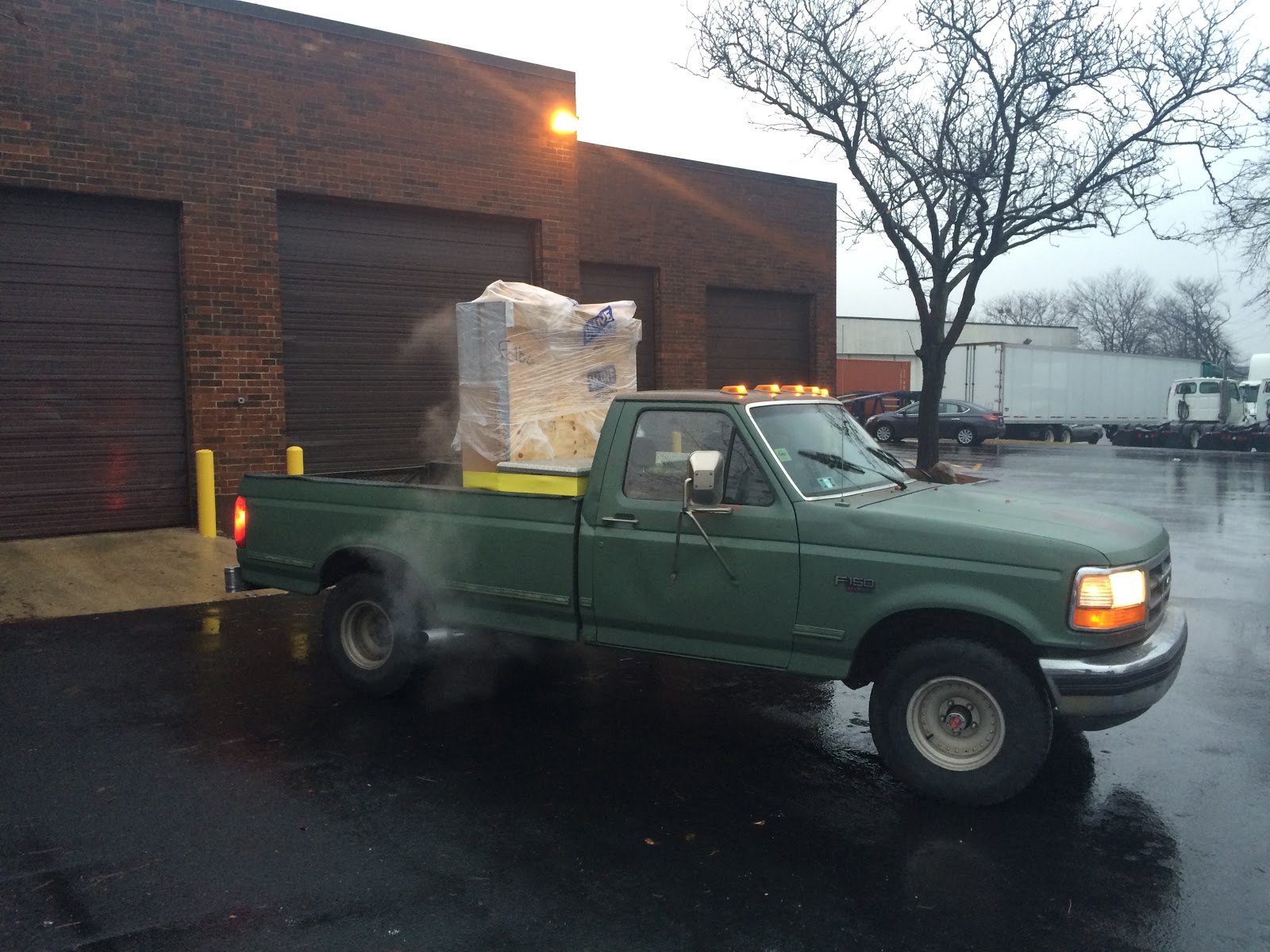 Getting it up the stairs was no easy task but finally we won that war.  We hoisted it up onto the existing rack and I used a 7/8" masonry bit that was about 18" long (had to run some cable through a brick wall at work a couple years ago for a PA speaker).  I was a little worried about clearance inside the wall because the wings on the bolt were about 1 3/4" each, but there was plenty of room.  I think if it hadn't fit I would have just kept drilling until I got into the closet in my bedroom on the other side of the wall.  I shimmed up 3 of the legs to get it nice and stable and the toggles are so tight and strong I think I could use them to climb a mountain.

It is so nice to have the extra space to grow but also to be able to split up the collection into different 'piles'.  And vertical storage sucks but vertical storage at foot level is far worse - no more of that!  I am not going to post any pics because its kind of plain but you can see in the bottom pic that I also built a rack for my 7" records and I think I am set for life in that department.  I can hold at least 300 in there I figure, comfortably (I have less than 100 now).  I used only plywood and only nails - pretty proud of myself.  That unit benefitted more from the belt sander than anything else I've ever used it on (and I use it often).  I also am proud that I was able to carefully notch the three longitudinal dividers to the full height of the rack (about 6-7") so it all slid together.  I do regret not going to get some wood glue on top of the nails because it would have benefitted here but it doesn't need a ton of strength as I don't plan on dragging the thing around, or at all. 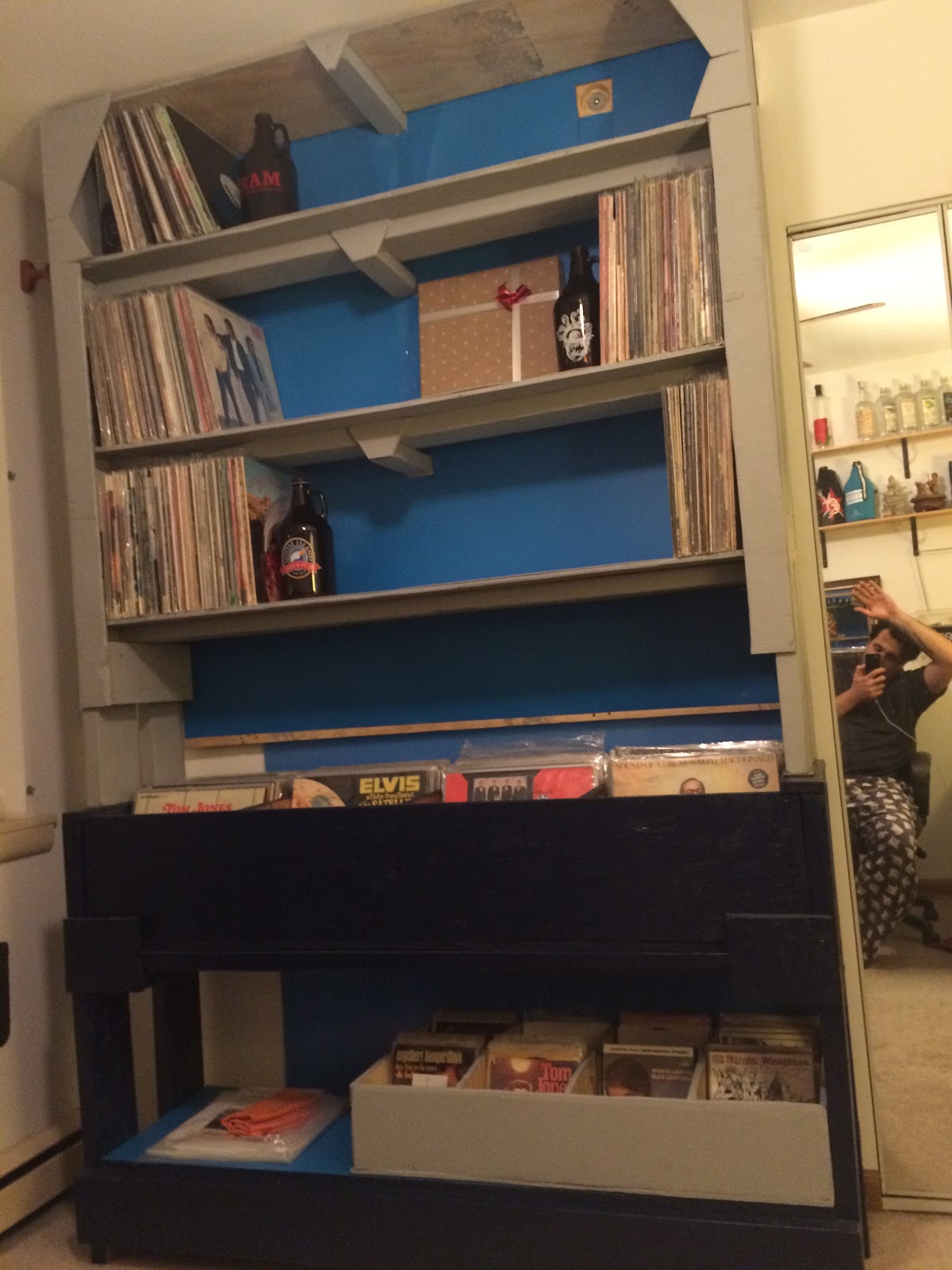