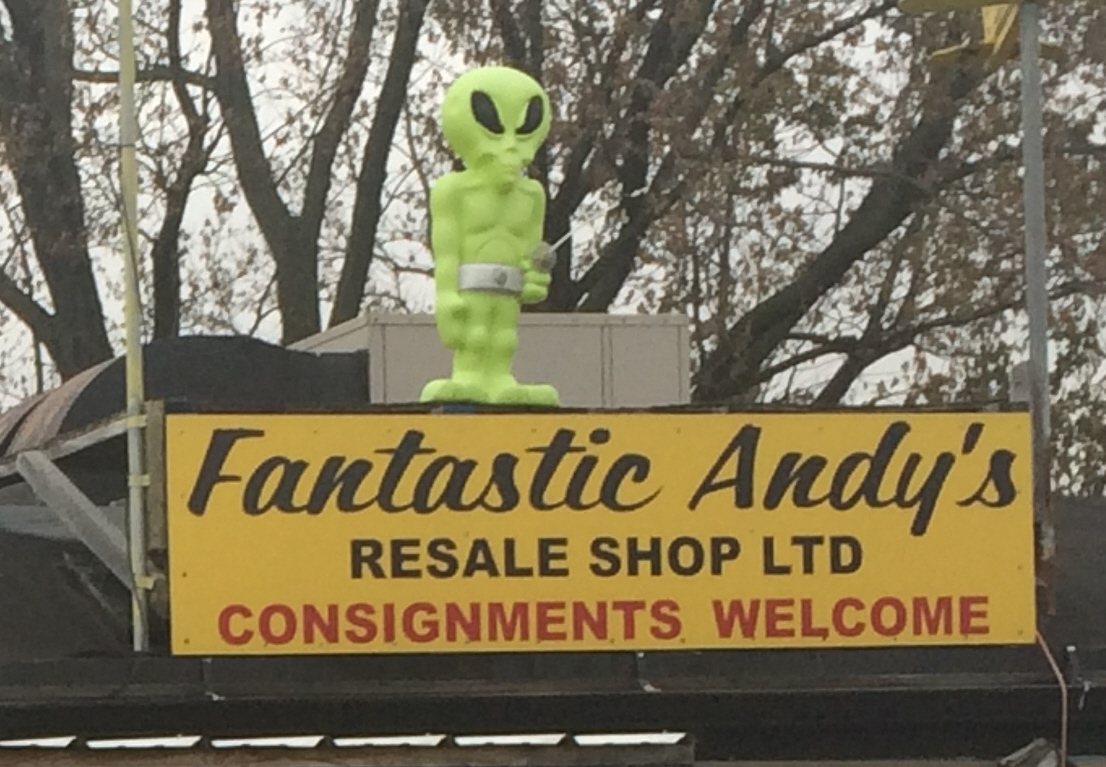 Went for a road trip to visit my girlfriend's home town for the weekend and stopped by Fantastic Andy's, a place she had already told me about.  I was eager to check it out after hearing some wild stories.

A very important record was purchased here (by her) over a year ago - still probably my favorite and definitely the most important Engelbert record to me, 'We Made It Happen'. At that time she was just beginning to branch out on her interest in Engelbert's music (she was barely more familliar with his discography than I), she gave me the record and said 'I might like it'.  Of course that has proven to be a wild understatement and that record has honestly changed my life.  So back to Mecca I went, to see where gold is spun and magic drips from the walls of Andy's consignment shop. 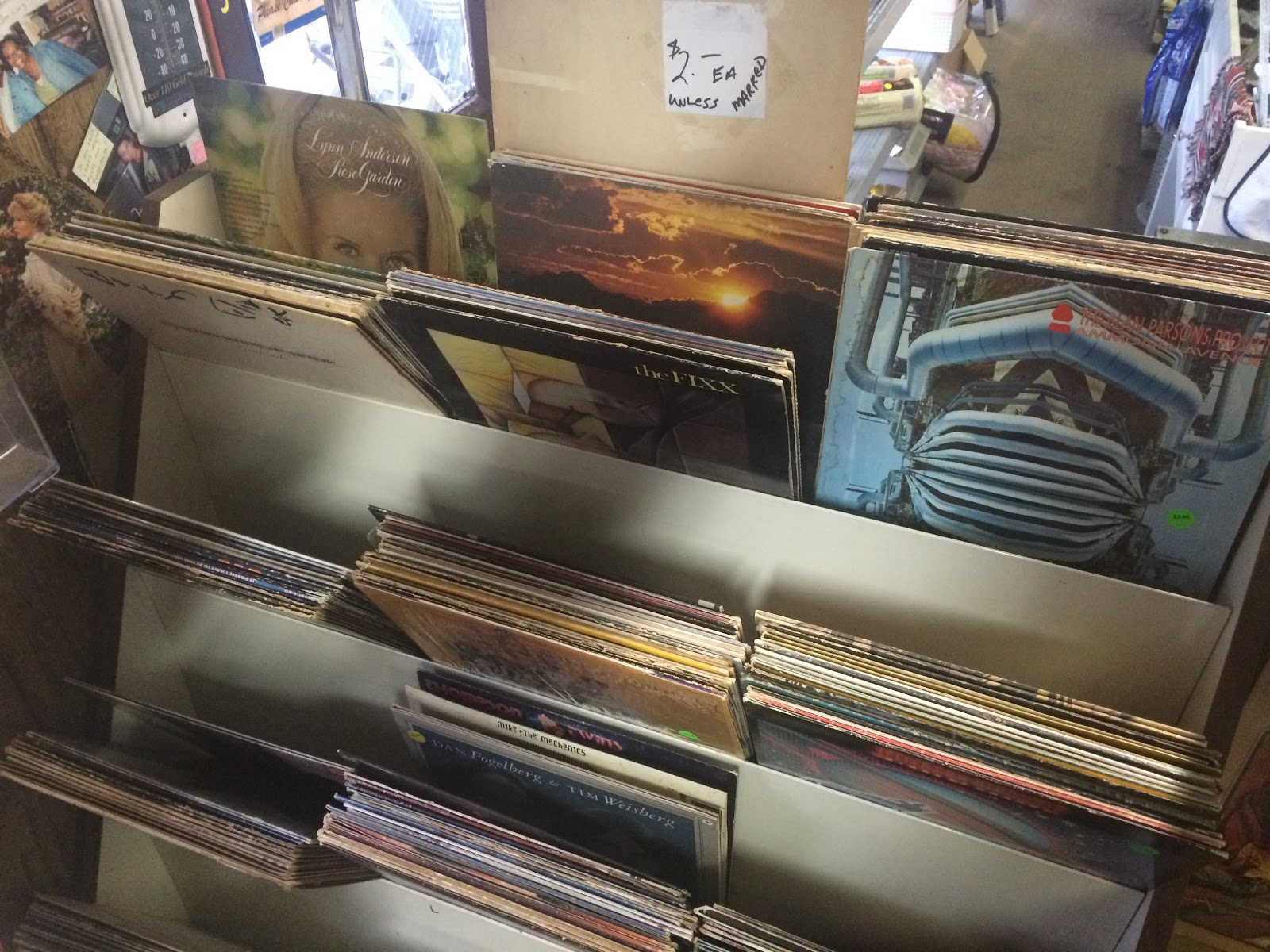 I questioned my own motives as my hunt began as I pulled out so many records that I wondered if I was just getting carried away and buying stuff I didn't need because I was excited to be there.  But as I have since sobered from the intoxicating ways of these four walls, I can attest that indeed I carry no regret with my purchases.

Glen Campbell - The Artistry Of Glen Campbell
Normally I'd stay away from Glen's compilations but the packaging is beautiful and it is in insane good condition so I could not resist.  I may go ahead and play C1 at the next Bar Mitzvah I attend.  Also jammed inside was a huge full color concert program - total bonus that I'd bet did not come with the actual release.

Mike + The Mechanics* - Mike + The Mechanics
I did not buy this for A2 but A1, a song everyone knows but not by title.  Such a great track and this record will fit well within the virtual bookends of my growing 80s collection which also contains Benny Mardones and Gino Vanelli (amongst others).

Sade - Promise
Like the record above, I continue to evade the obvious justification for purchase.  It is actually A1 that brought this one home, by far my favorite Sade song and one of my favorites in general.  I was introduced to the track by MF Doom (by way of the Molemen) on the title track here, later renamed 'Kon Queso' (which I later appropriated for my own music video)

Alvin Lee & Mylon Le Fevre* - On The Road To Freedom
I don't have a clear reason for this one besides that it called out to me.  I am aware of Alvin Lee's work with Ten Years After and his general guitar bravado but the cover just looked interesting.

Tom Jones - I (Who Have Nothing)
#11 in the Parrot discography so far - this one is still in the plastic wrapper.

Dionne Warwick, Glen Campbell, Burt Bacharach - On The Move
A very odd promo record for Chevrolet which drew me in for the Glen Campbell tracks and put me in the sleeper hold for 'Walk On By', which I think has some of the most ingenius producing ever.  Such an excellent and haunting song with sparse instrumentation.

Suntones, The - Somewhere
My barbershop obsession continues.  The '61 International champs record even contains a mailorder form to order their other LPs - AND an envelope to boot to put it in! There are oxidation marks on the inner sleeve where you can see that neither item shifted inside the jacket for many years.  Where things get really odd is that this is the 4th barbershop album between my girlfriend and I - and all are autographed.  Three were found in thrift stores (the other on eBay) and its just a strange coincidence that this trend continues.  May it never cease!

My girlfriend bought my favorite Elvis record (which I already have, addendum forthcoming) for $3 which is a steal considering its in good shape and the original custom inner sleeves are intact.  I on the other hand paid $11 for mine and its warped (we joke that it has been 'plier-ed' - the act of being damaged purposefully with a pair of pliers).  She relented after I complained of this unfair fact for a couple hours and said I should just have it.  Now I feel disgusted with myself and plan to return it to her tomorrow, so that I may live on for eternity with my plier-ed special edition.

There is just no way at all that this many great records should be housed in this small, cluttered space.  The groups of vinyl I grabbed pushed me over the edge of 400 LPs (includes my scant couple 10" records but not 7"), which is exciting.

I also saw a copy of everyone's favorite Ray Price album (well that's not totally true) which was ironic given that my girlfriend's grandmother (who lived and died in this small town) held that as one of her favorites, and its another album and artist that I was introduced to via the same method as Engelbert.
Grandma -> girlfriend -> and me.

I'll close with this smattering of pics from inside and outside the store.  Andy's small notes stuck in the most random places are excellent stuff. 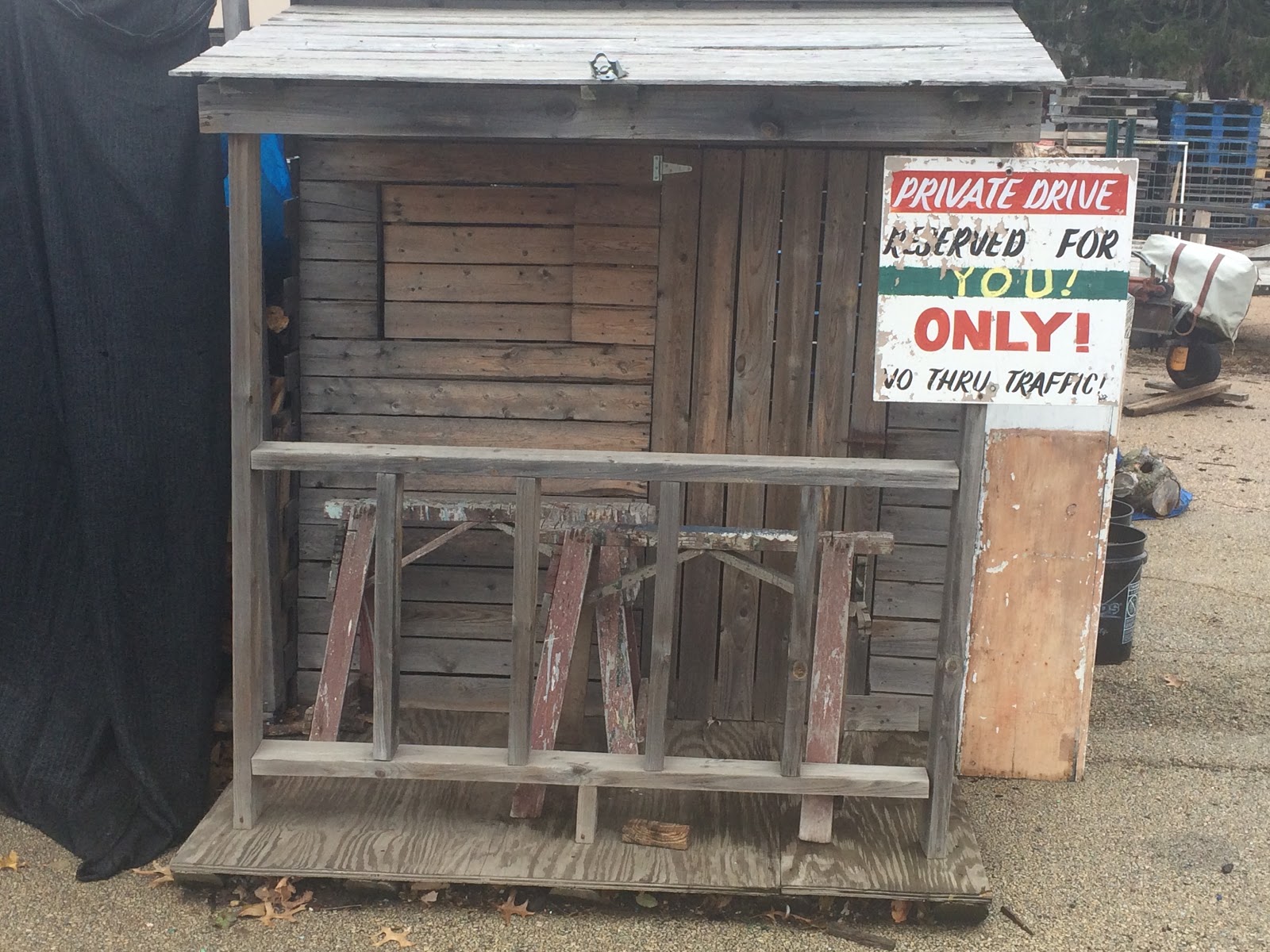 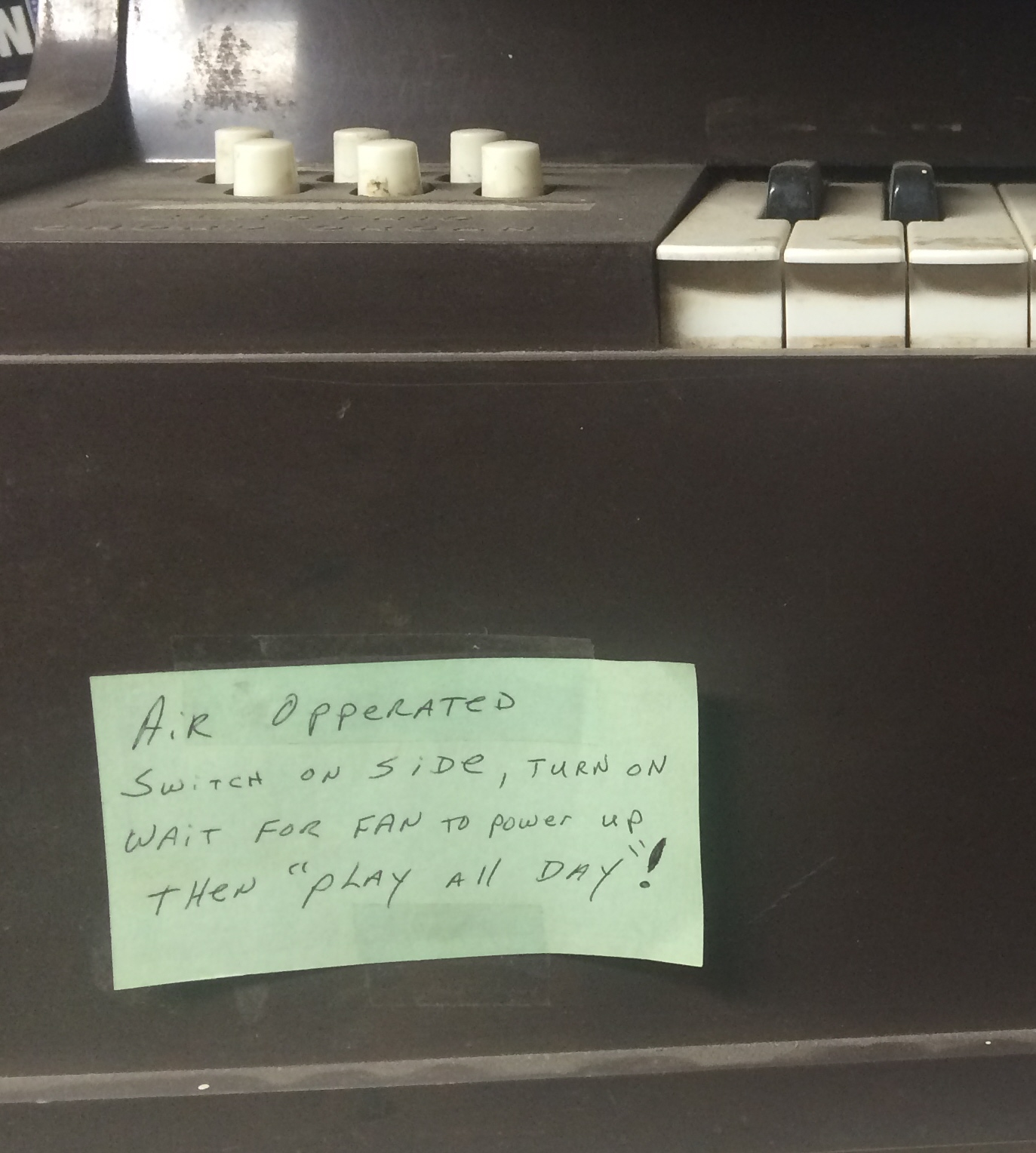 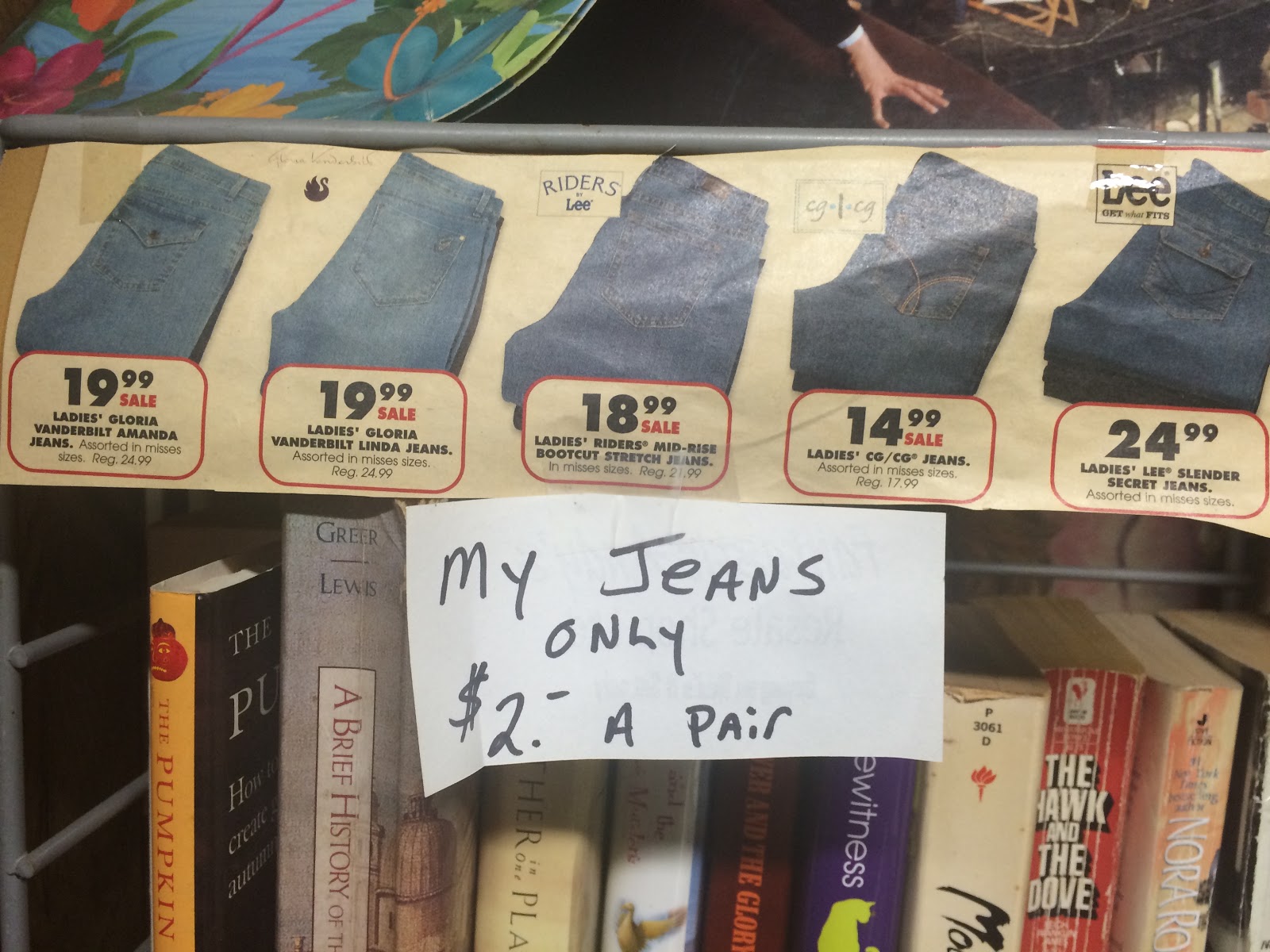 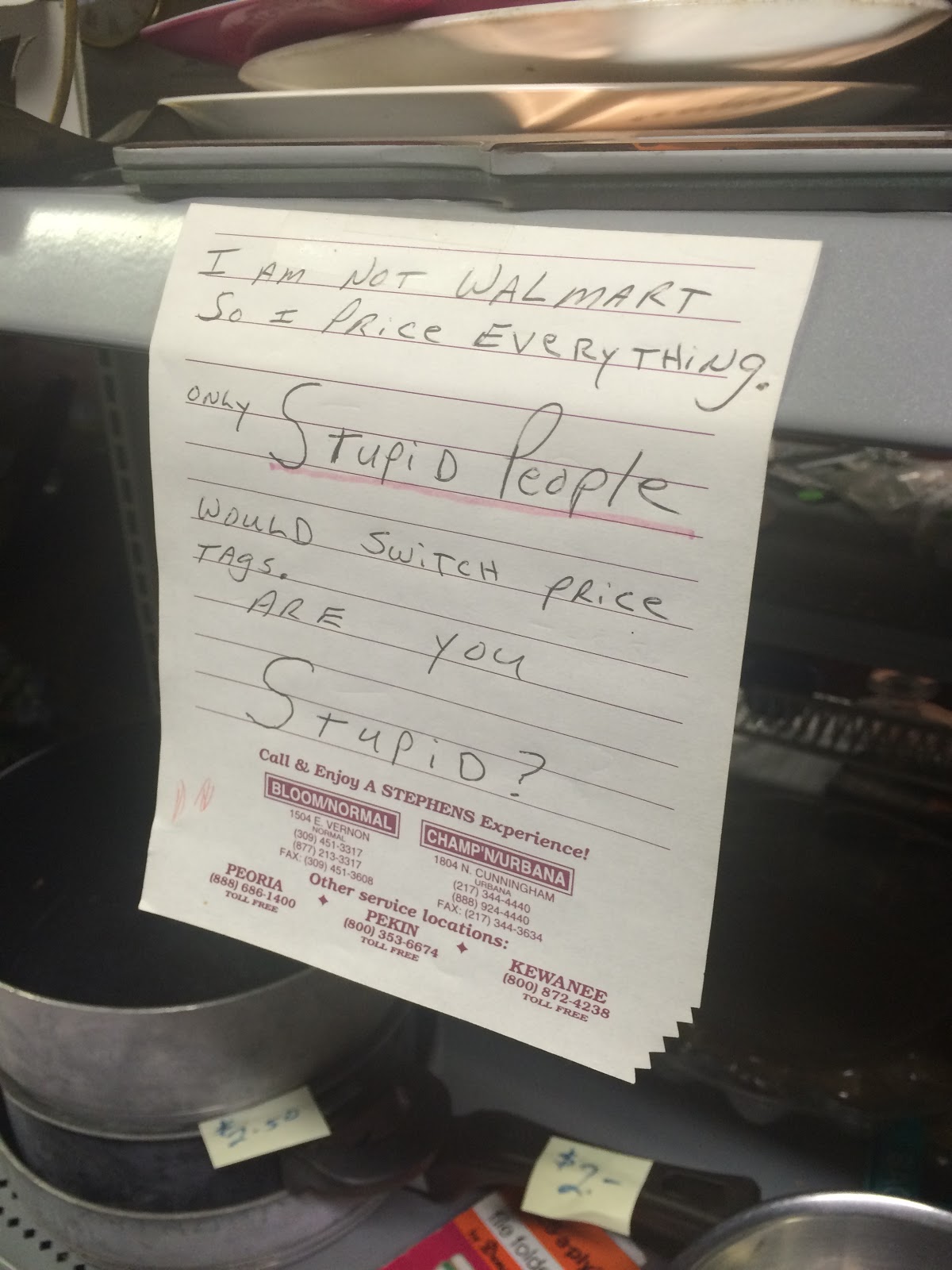 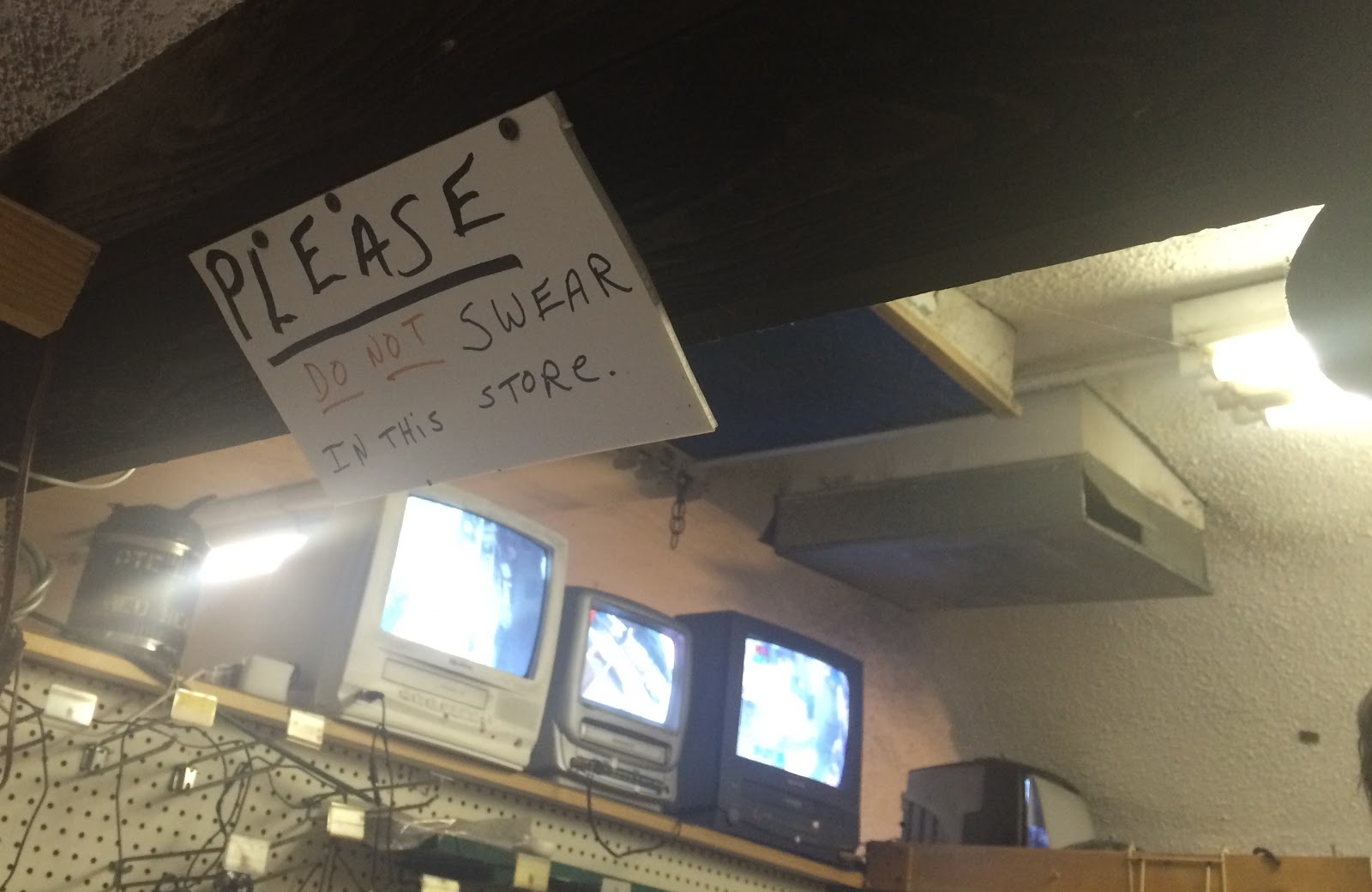 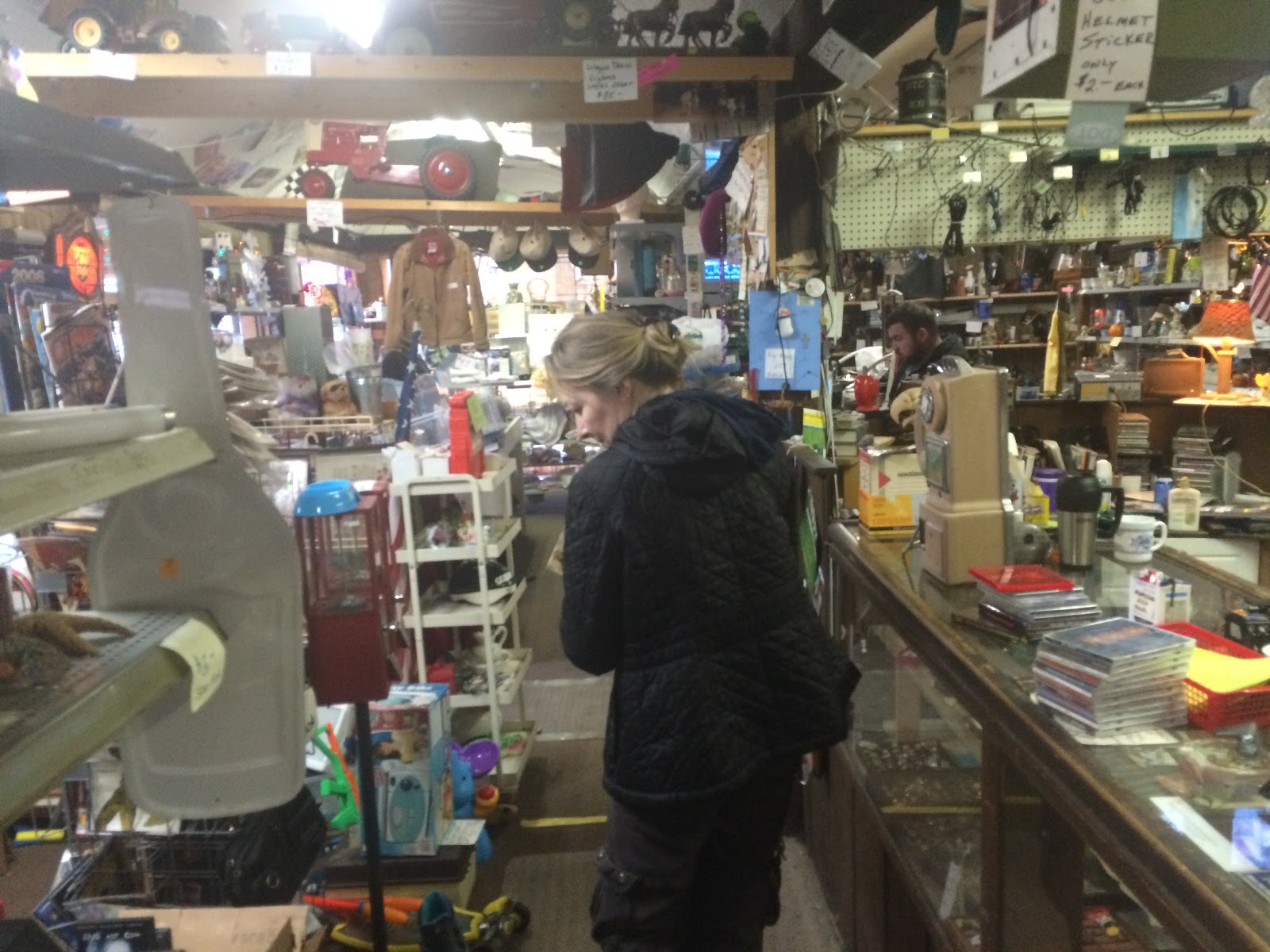 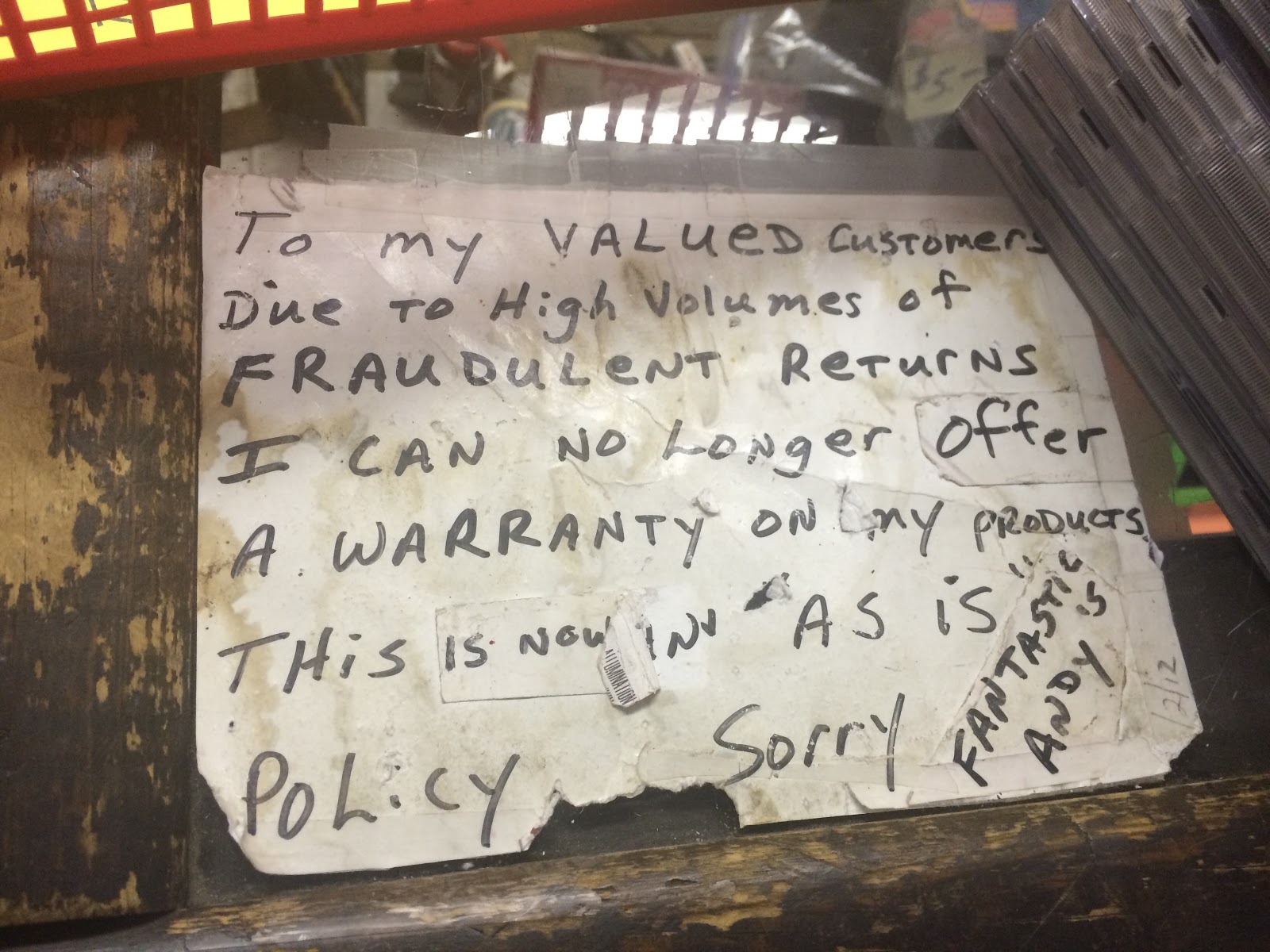 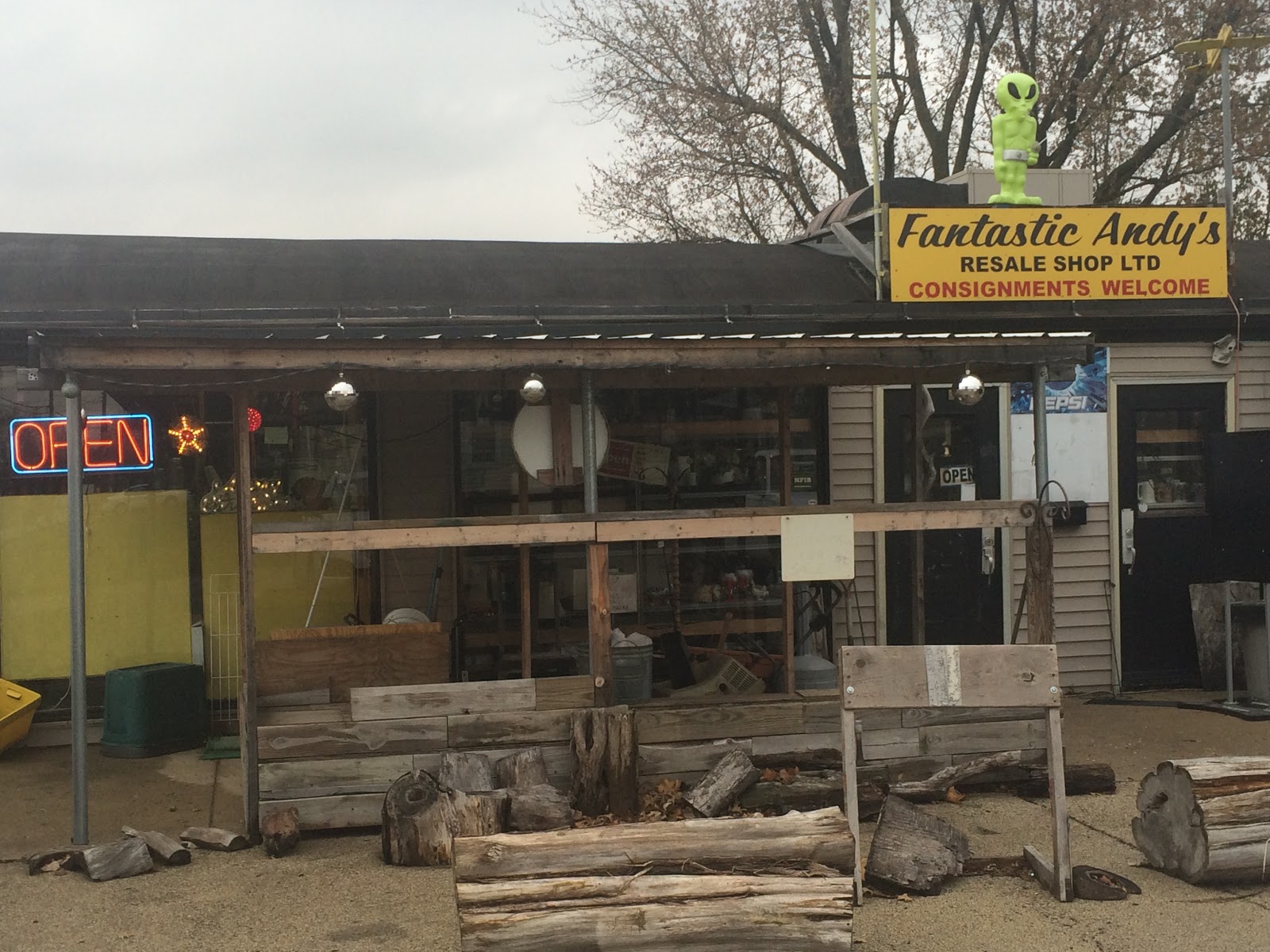