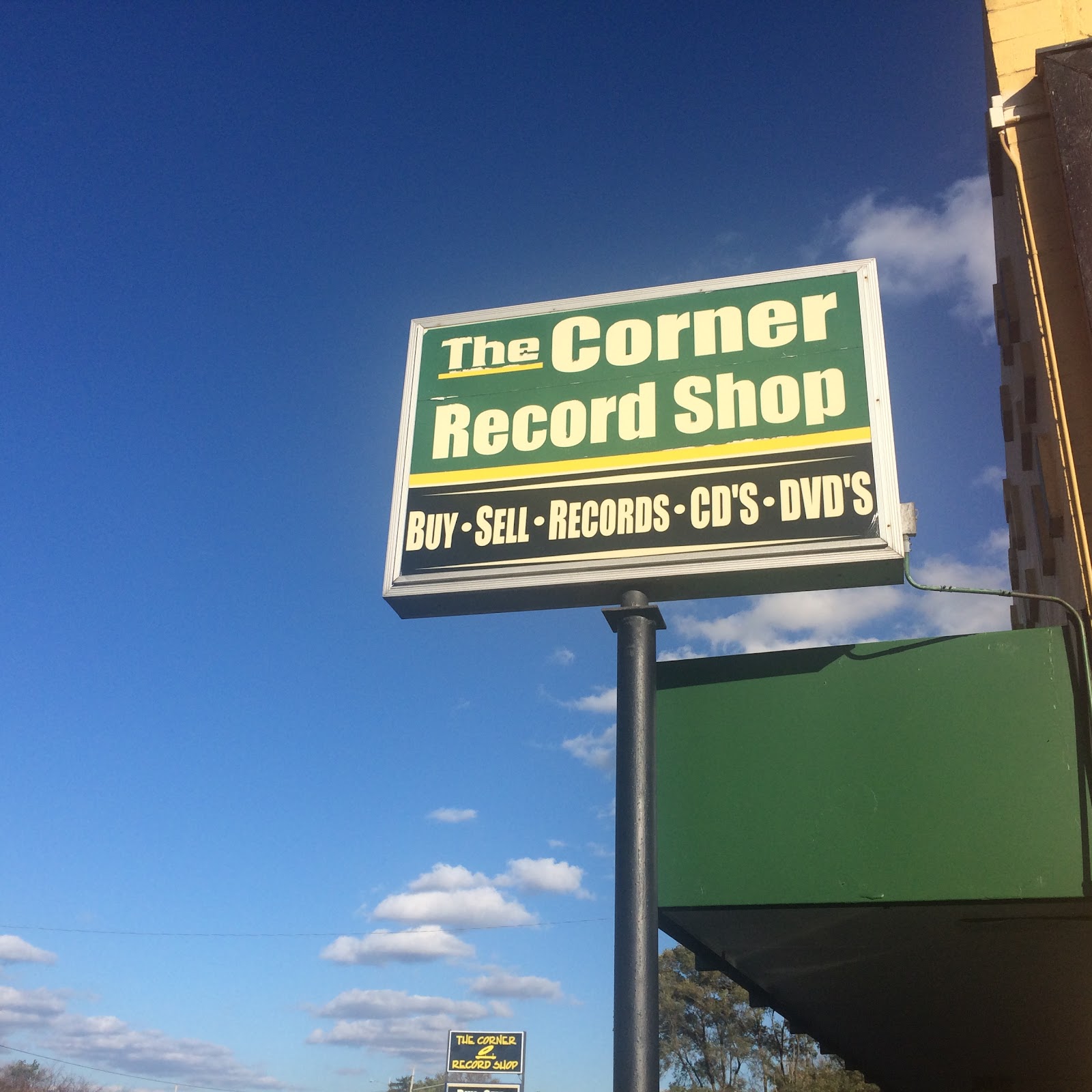 Another trip up to GR - found the hottest record store in town.  I spent my last trip exploring a seemingly endless array of thrift stores.  With that just about quenched, I took a quick look for record stores.  Found this one conveniently on my way into town from my point of origin and glad I chose it.  I initially planned to hit another one but I spent quite a while in here and was just about exhausted from the hunt by the time I was done so I called it a day.  I was cranking up one of my favorite albums of all time (vinyl dub, of course) and cried my eyes out listening to the epic title track as I pulled up.  I pulled myself together and headed in. 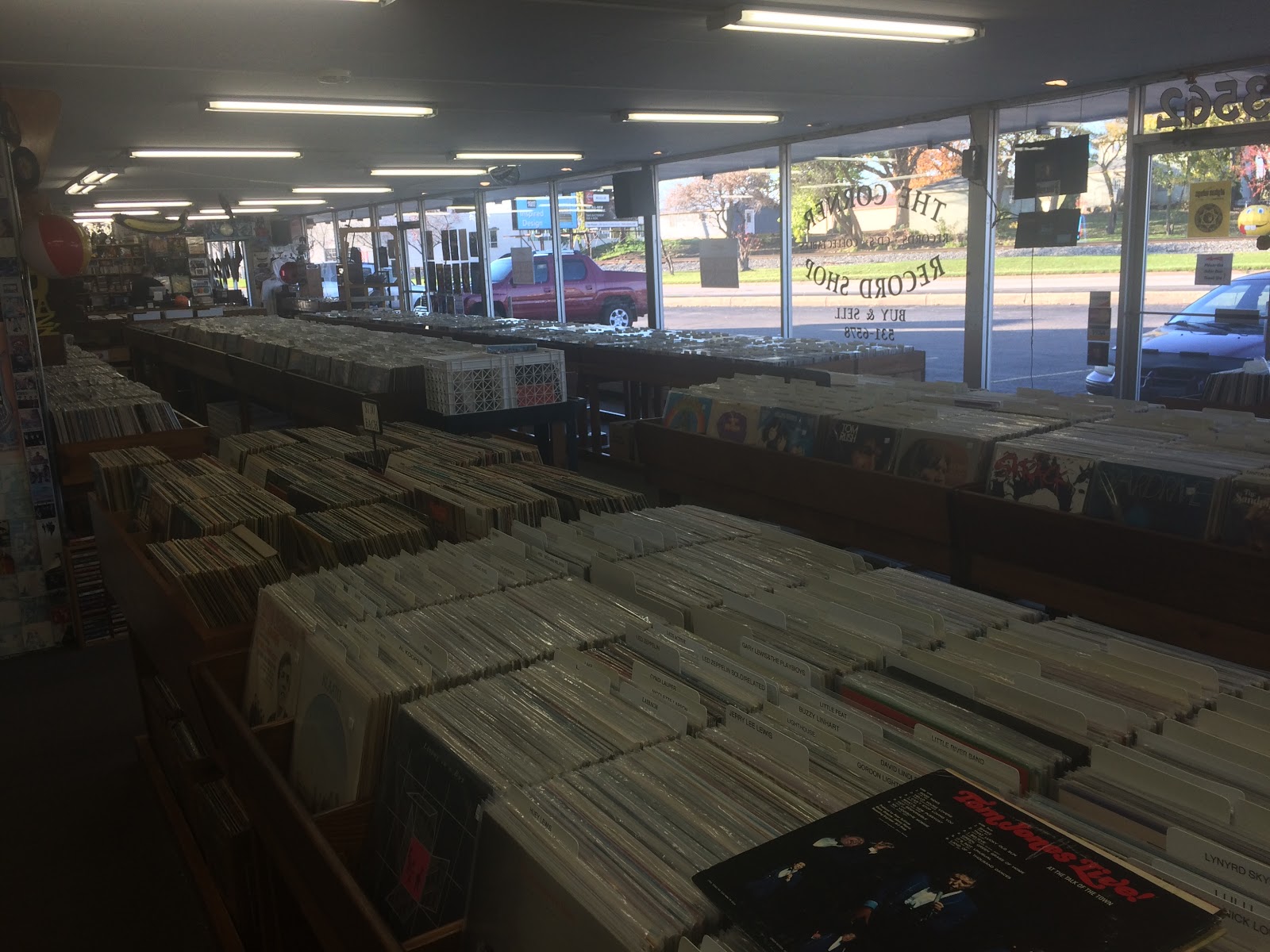 Took a periphery glance at the jazz section on my way from the front door into the back of the store where a giant $1 bin sat patiently waiting for my visit.  Mr. Yellow Shirt arrived - surely a regular.  After his greeting with the two proprietors behind the counter and made a bee line (appropriate given his dress) for my vicinity and commenced to scoop up a growing pile of cheap vinyl.

I kept trying to sneak a peak at his scores (I did sneak the pic) but I was never able to make anything out.  He was obviously doing the same - and more successfully as well - as at one point he handed me a copy of 'This Is Tom Jones' and said something like 'though you might want this' (he obviously saw my copy of 'Green Green Grass of Home' in my pile already).  This stands as probably the coolest thing anyone has ever done for me during my record collecting annals.  I am still floored to be here writing about it.  Unfortunately - I already had it (just got it the week before from my buddy Terry) but there was no way I was going to shoot down that good deed.  I added it to my pile for the moment and continued on.

Besides 'Green Green Grass' (slightly beat but the mono version!) I also grabbed Roger Miller's second album (also mono - wow!).  Earlier this summer I picked up a copy of Anne Murray's first album (ironically did not blog about this quick stop at a Hoffman Estates garage sale) though it was the Pickwick reissue.  I've been on the lookout since for the original from five years previous on small Canadian label, Arc Records.  Found it here for a buck! And better yet track B1 has been replaced with an alternate.  I gifted the reissue to my girl (an Anne Murray fan as well - though I feel this album requires little fandom to appreciate) and replaced it with the OG copy.

I poked through the country and jazz sections and didn't find much of interest.  I keep looking in the 'H' section for some Eng and found none.  Now it is standard practice for record stores to keep their doubles and other backup vinyl in bins below the main racks that customers dig through.  Here however, there was simply MORE records.  As if this wasn't good enough, I encountered something I have never before seen and perhaps never will again.

At great cost no doubt (confirmed by the proprietor upon my release of payment and exit from the store a time later) they had put these lower bins on tracks so they slid out like drawers.  I cannot count the times I have forced my giant frame inside of the woodwork to peer at the vinyl within at great discomfort and low light.

I gave up on trying to find any Eng (still distressed that a store this large and complete would have ZERO records) and made my way towards the cashier when I asked if and where they had any 7"s.  The fella commented 'yeah, we have a few' with brazen nonchalance.  He led me to another room with likely the most vast collection of 7" records I have ever seen and furthermore the most well organized collection of such that probably exists anywhere.  I am not a great collector of these small platters but I have often thought that this was influenced by the usual organization (lack of, specifically) that all record stores seem to employ.  Without full sleeves (as most do not come with) flipping through them sans proper bins and dividers is maddening and just a waste of time.  Not here - they are setup no different than regular 12"/LPs.


I went straight for the Engelbert section and was not disappointed.  There had to be 20-30 records in there including 4-5 copies of the (one of eight) picture sleeves you see time to time.  But hidden within was a very odd import (probably a bootleg, more accurately) with a strange history.

It is a split seven inch on a small Asian 'label' (as this is surely an unofficial release I use that word very loosely).  Side B is Tom Jones yet he is credited nowhere on the sleeve (which is on nice card stock) or the vinyl label.  It is mono (bonus) and has some interesting stamps on it.  I would not have known that Piliana was an Asian label except for the scant two releases already on discogs (both of which are clearly from that corner of the globe).  I will guess it made it's way to the USA and GR beyond that by way of an immigrant: the first (and more legible) stamps shows the 'Family Life Center' in GR proper.  I cannot find any facility located at the stamped address but Google maps 'Street View' shows the 'Hope Network' has a location there now.  But it is the stamp underneath (largely obscured) that is truly mysterious and interesting (and calls to the Asian roots of this piece of vinyl).

Two lines of Chinese characters (forgive me if this is not specific enough or altogether incorrect) is followed by what appears to say:

There are two lines further after that but they are totally obscured by the stamp from the 'Family Life Center' which was actually double stamped right over it.  I can only extrapolate that someone bought this record in the late 60s (it is undated but that would be the presumed ballpark) at a bookstore on the island of Boreno when it was released, brought it with them to the USA (perhaps directly to GR) where it was donated to the Family Life Center's thrift store.  Someone bought it there and then it came into the hands of the Corner Record Shop, and now my own, where it shows no signs of departing again. 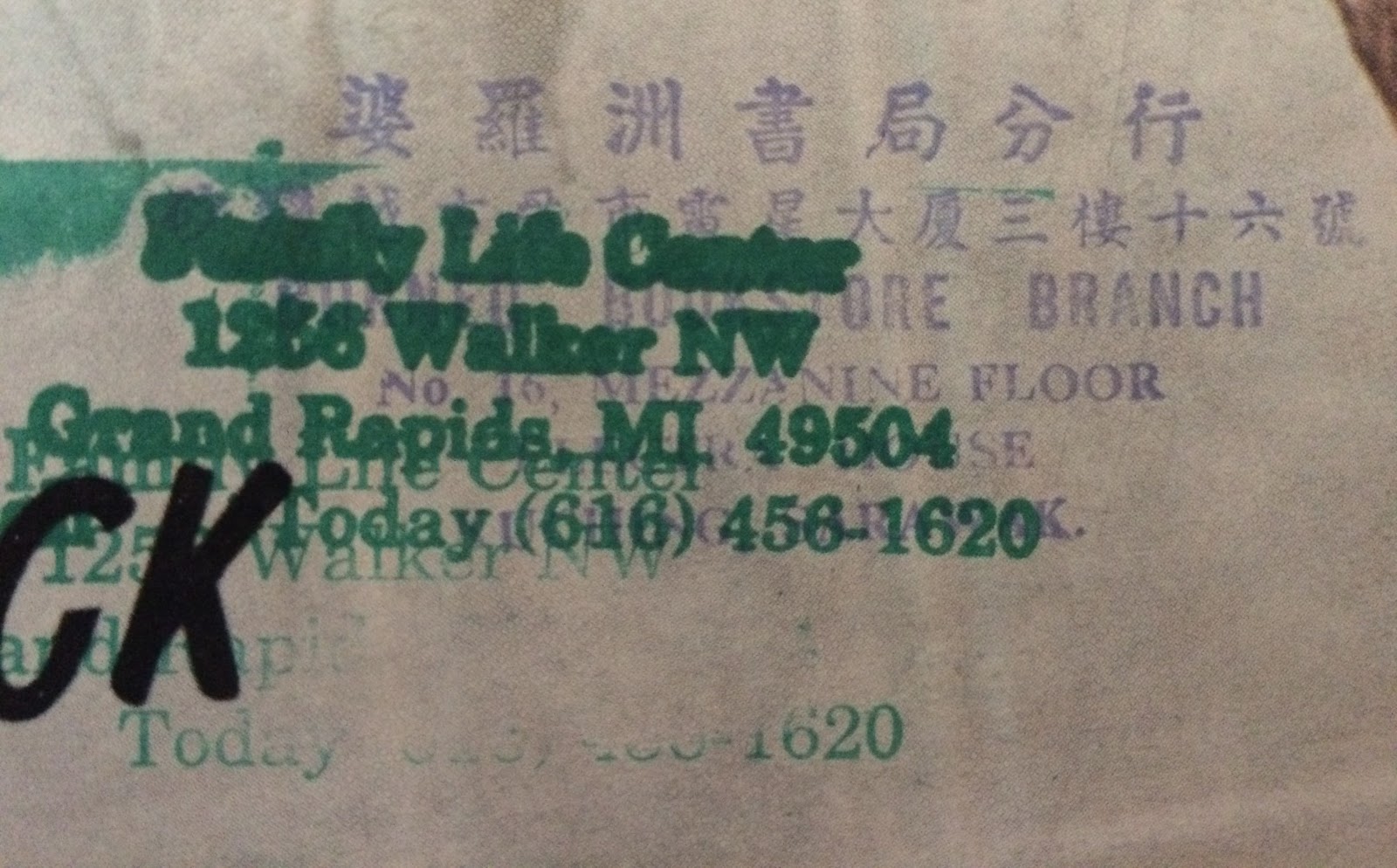 Just as I had been ready to depart before my excursion into the '45 Room', I again prepared myself to head out.  It was then I was notified there were yet 'MORE RECORDS' (many, many more I would soon find out) 'just through there' [points to door].  And as the door opened, my adventure continued.

I came into a giant garage like area that housed a full stage with giant PA and musicial instruments from someone's performance/jam session/rehersal.  Also a number of vehicles sat (there was a giant overhead door behind them) covered in tarps.  It was still and quiet and brisk but not cold.  Nothing stirred save the overhead door which rattled in spite of the wild winds whipping outside. 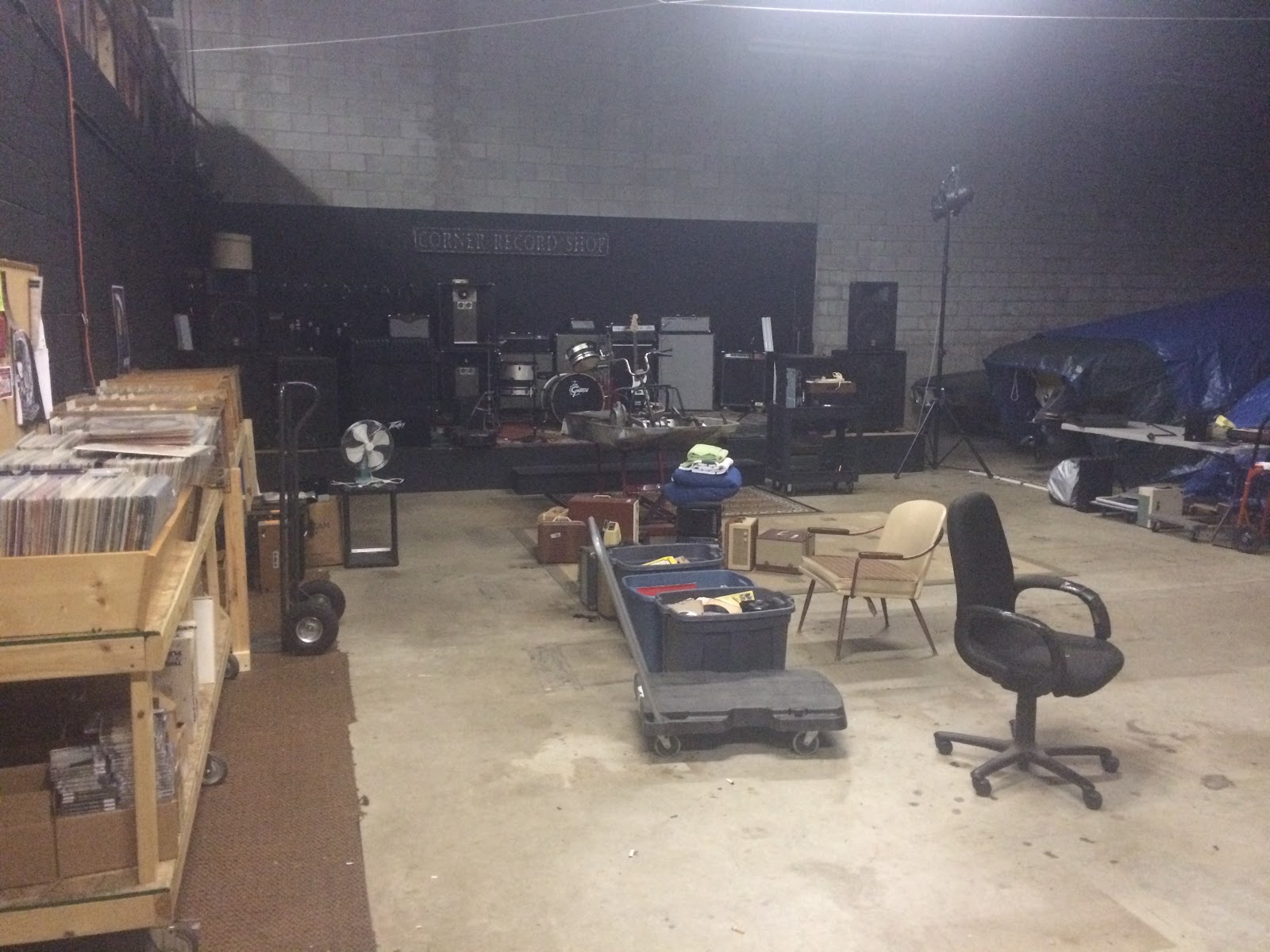 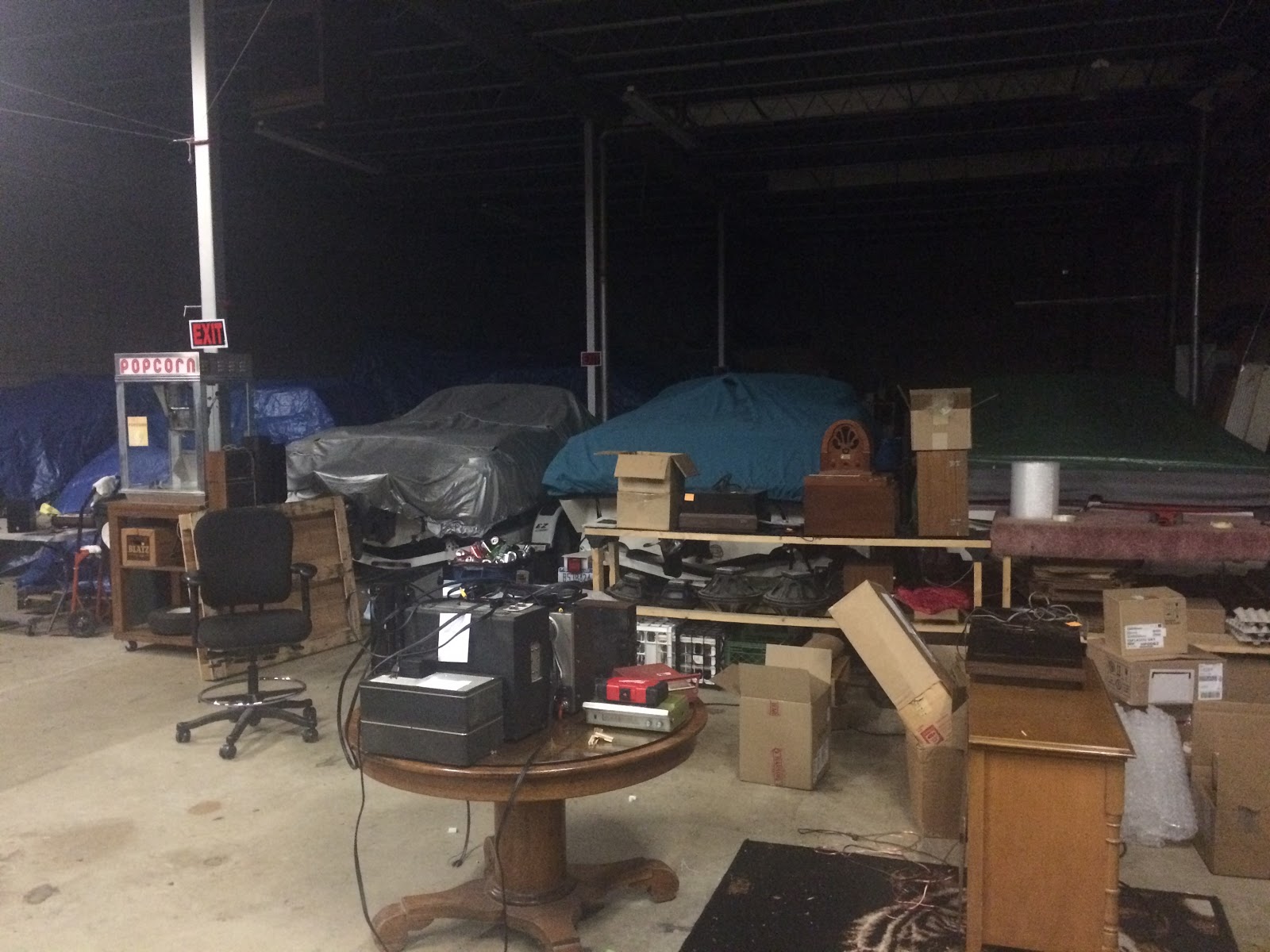 I was greeted with two large racks on my left as I guided myself into the area.  I found a number of 50s-60s singers and felt this must be where they store their Engelbert collection.  After the second bin I had still found nothing, when I noticed a stairwell leading up to a huge concrete mezzanine.

It held the perfect fodder for a book or movie script: a man trapped in a record store, left to nothing but organizing vinyl day and night in total serenity and silence.  I am embarassed to admit that I allowed too great a span of time to elapse between my visit and the actual writing of this post (my often nemesis).  It has only been about 10 days but I have indeed forgotten the gentleman's name - for he is not a fictional character but a very real person.

He explained that the owner of the store approached him with a 'job to do' as he had recently lost his own gainful employment (likely less fun than this).  The job: to sort through many thousands of albums and organize them.  Indeed this mezzanine of countless wooden bins of records could constitute a record store of its own in terms of area and number of vinyls available.  I have certainly been in stores smaller, some very much so. 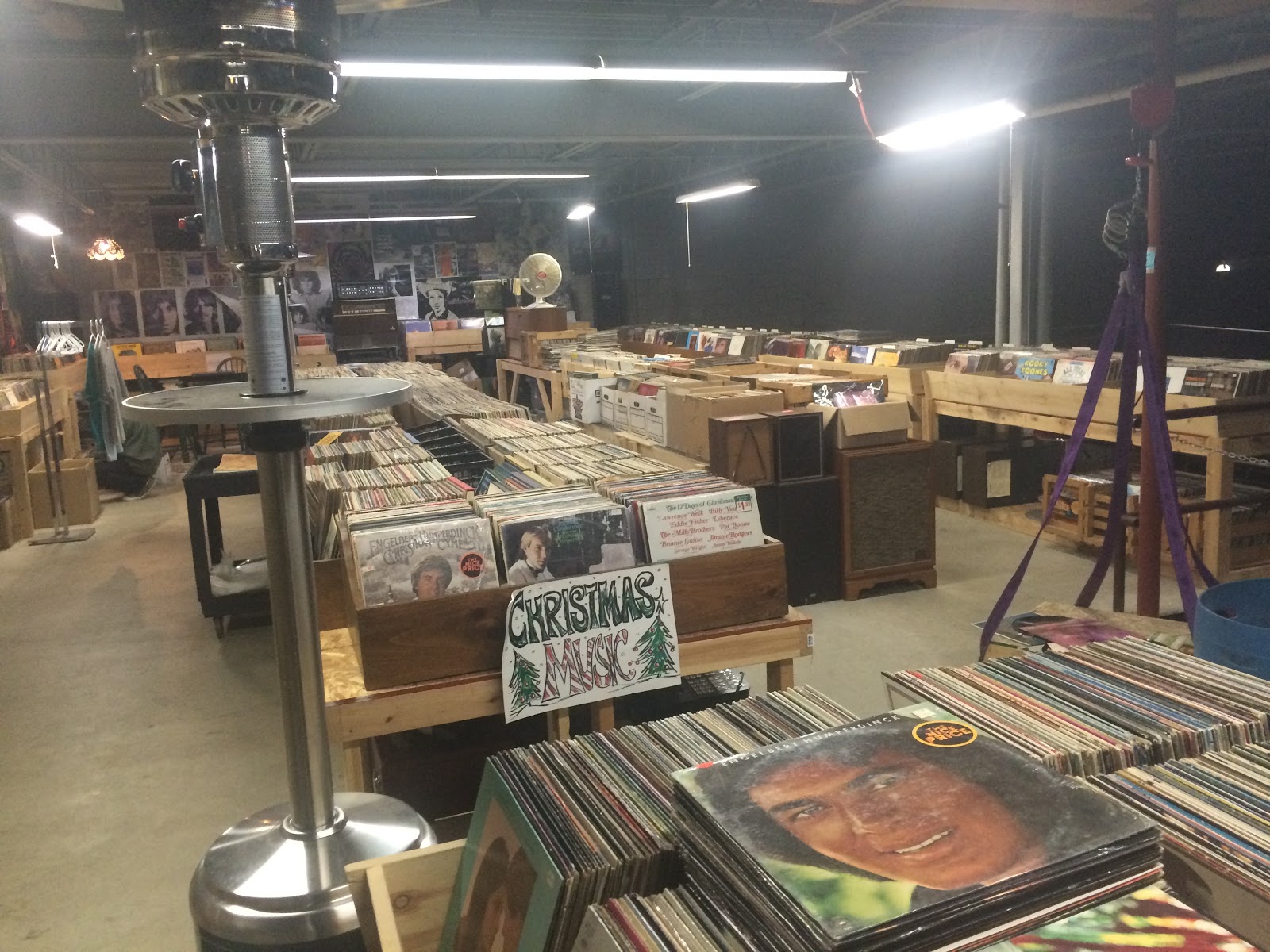 He asked immediately if there was anything in particular I was looking for - he had already spent weeks up here organizing in solitude and knew where everyting was.  'Engelbert Humperdinck', I announced; his retort was that the bin immediately before me contained only male vocalists.

I did not find any Engelbert records I did not have (there are only a couple Epic releases left, save any UK version of US Mono versions) but we collaborated on pulling every single one out in plans for alphabetizing said bin.  I did hunt through the Christmas music bin looking for Epic Xmas release #3 (no dice) but did find #2 for my girl (who like me now has both of the first two releases.  Found #1 in there as well).

I was looking for Tom Jones simultaneously and when the Eng hunt reached its end I went back and pulled out every Tom Jones album.  I did so to help, in case I missed anything and also because I love going through records.  That stack was equally as huge and I grabbed a handful of releases including:

Tom Jones - Funny Familiar Forgotten Feelings - glad to find an older release, the current build of my discography offers too much later work.
Tom Jones - Tom Jones' Greatest Hits - the only Parrot compilation
Tom Jones - The Body And Soul Of Tom Jones - same as comments for the FFFF album above. (Also part of a three release series with covers by the same artist, all managed by Gordon Mills.  I don't know enough about Gilbert O'Sullivan but the resemblance to Engelbert's 'In Time' is obvious.

I took a look through some additional country albums and inquired regarding the presence of the collaborative album between Glen Campbell and Anne Murray I've been looking for for a while.  Nothing doing - I took a brief look through some of the piles already in progress.

He had a hilarious series of stacks of what I would call 'Goodwill Filler' - the leading candidate for that club shrouded in infamy would be Mr. Mantovani.  I suggest a funeral pyre for the lot of he and his ink.  I caught wind of a tiny Barbershop pile and found the 67 Decca comp to my delight - been working on researching the full series lately. Since I found a local classic during  my previous visit to GR and my girlfriends phenomenal score  (overwhelmingly recommended) I have been obsessed - forgive me.

I actually returned to the male vocalist bin and started pulling out all the Andy Williams before I felt like some kind of creep who wouldn't leave - so I did. I complimented the fellas behind the counter on what is one of the best record stores I've been to lately (or ever) - as evidenced by this massive post which threatens to kill me if I keep typing.  Good night. 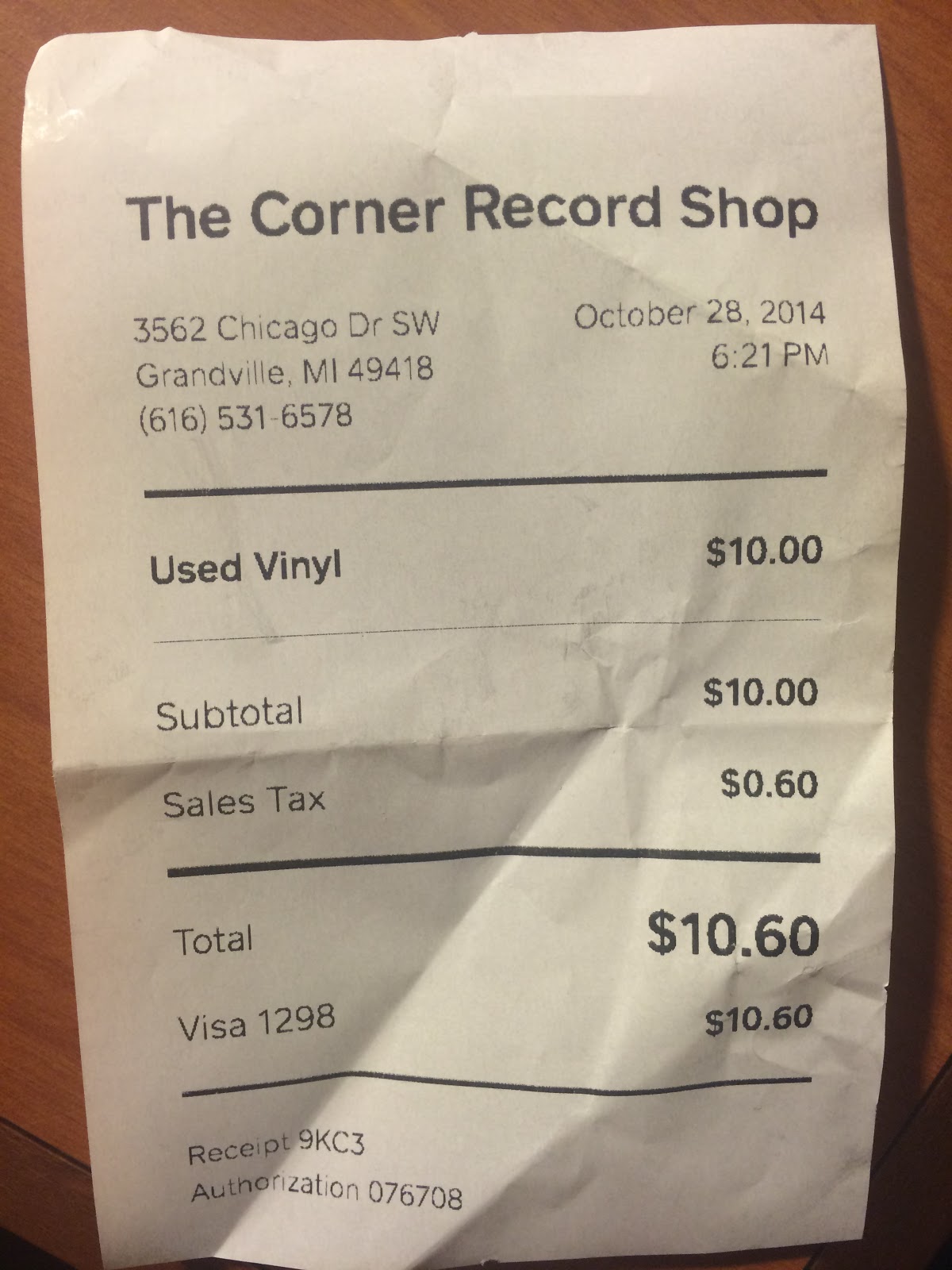 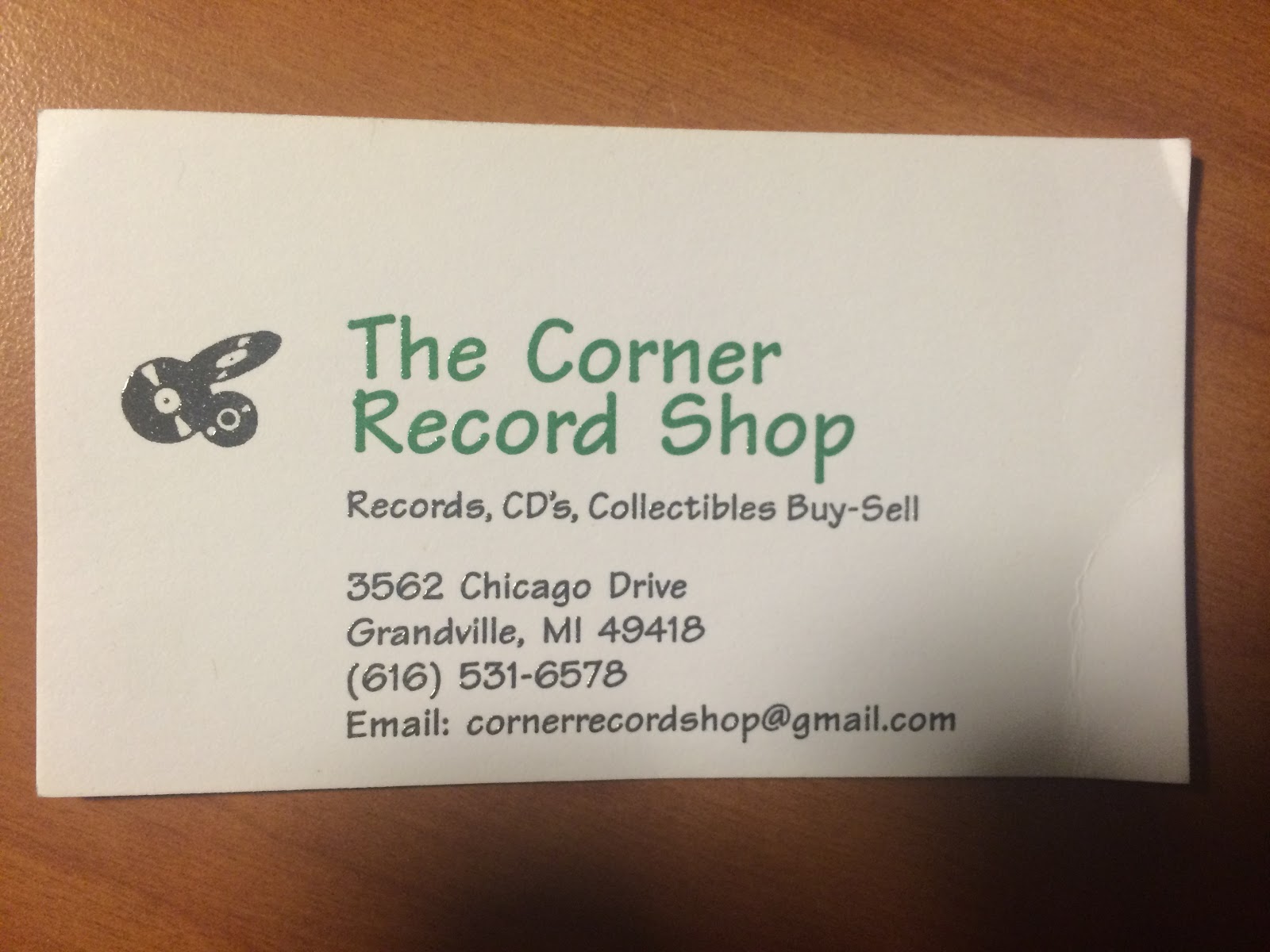 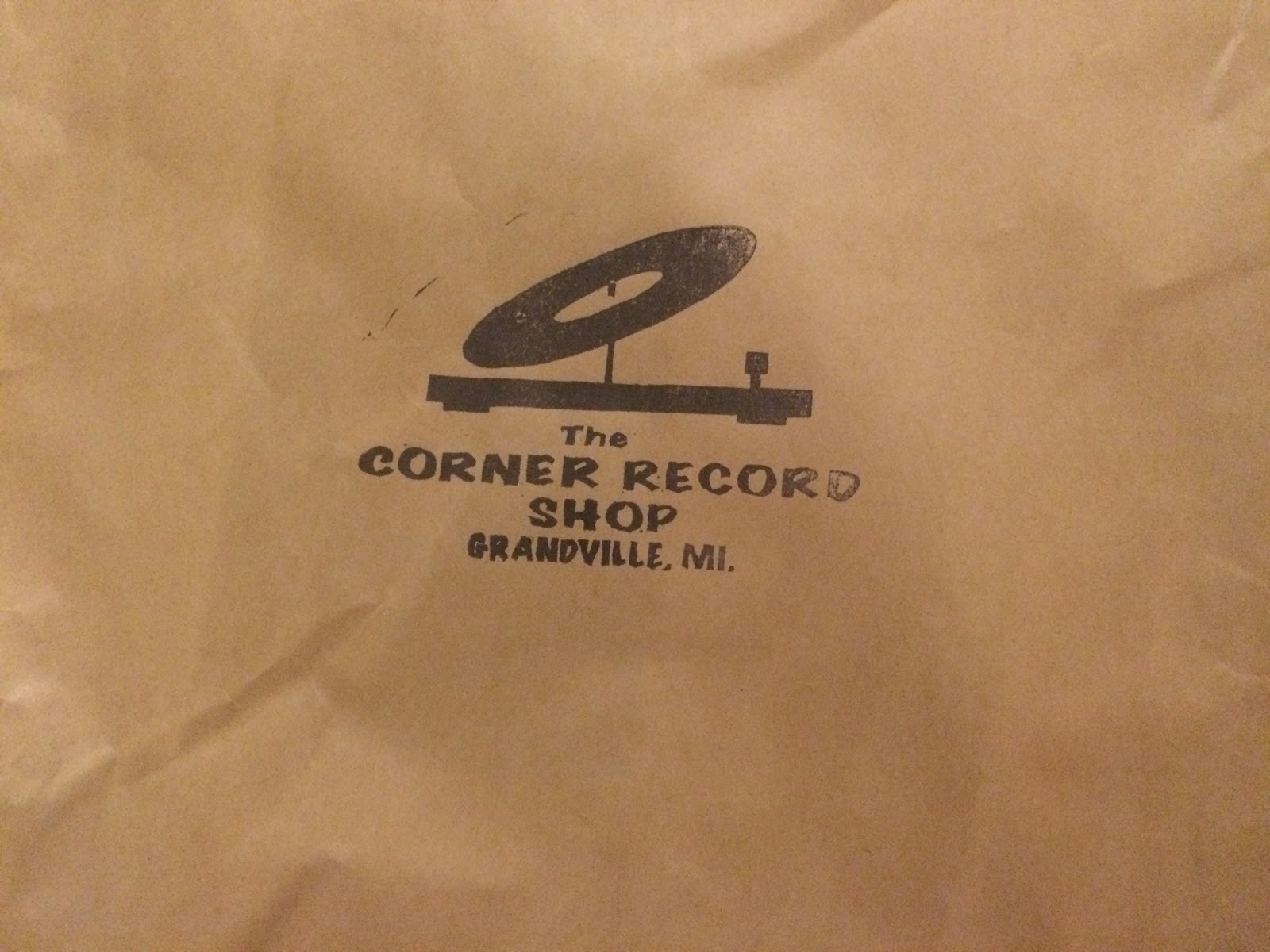 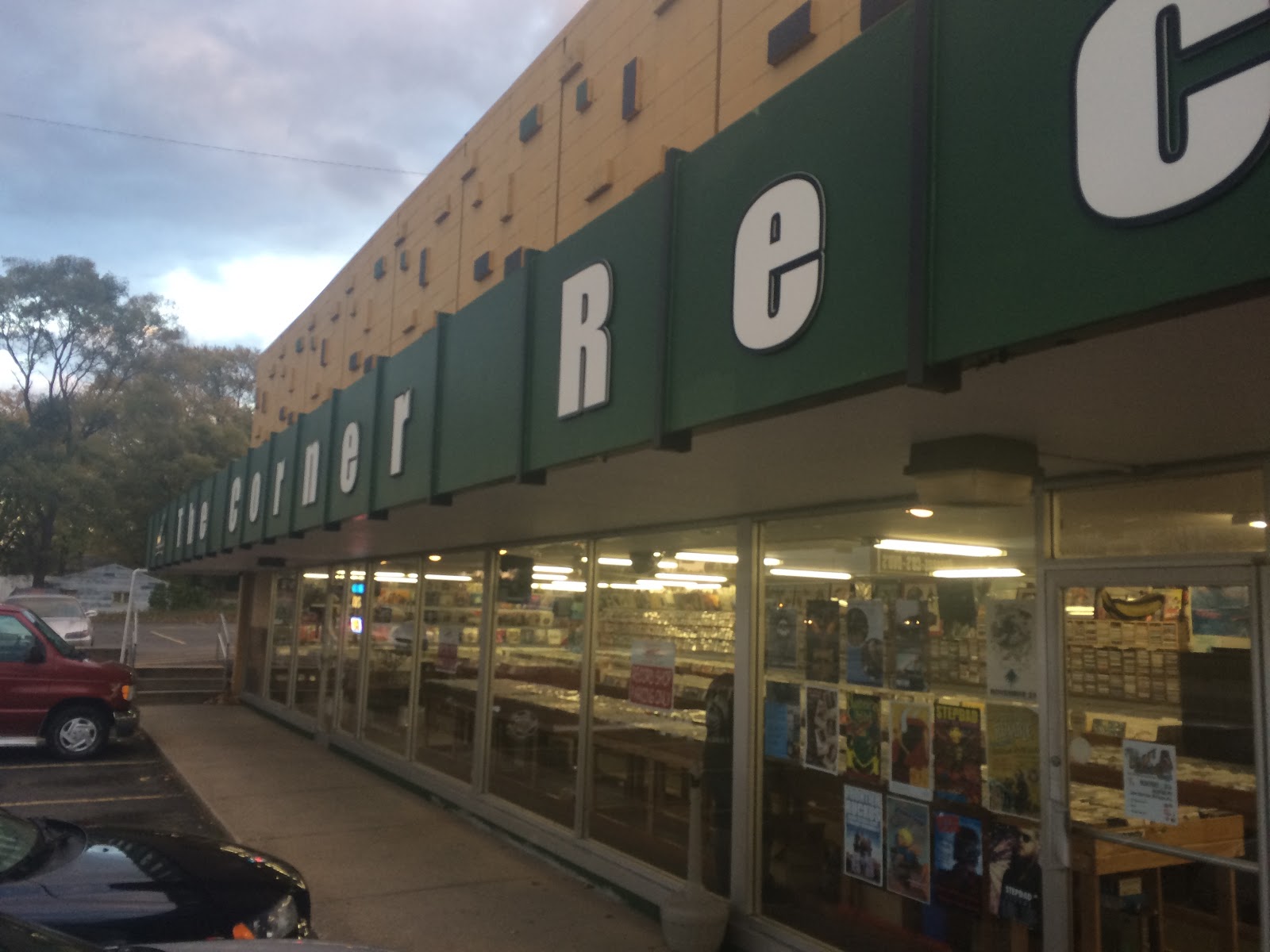 Email ThisBlogThis!Share to TwitterShare to FacebookShare to Pinterest
Labels: GR, michigan, out of state, record store