Another great opportunity courtesy gsalr.com.  A sale in the neighborhood I grew up in and close to my alma mater (high school, specifically) I got there shortly after 8 to find an elderly woman relaxing in a lawn chair surrounded by her goods.  Initially I only saw a single crate and down onto my knees, I got to work.  She immediately offered me something to kneel on but I explained this was par for the course when you spend your days searching for vinyl.

The first bin yielded nothing but I was determined to walk out of there with something.  This want was expedited by the following bin 10' away that contained some country records (she had things carefully organized by genre, with some paper labels as indexes sticking out between the jackets.  I immediately came across two records...and I asked if she had been open yesterday.  She said that she had - this confirmed my thought that I was quite lucky, as while not exactly rare I did feel forunate to come across both Johnny Cash's Live in Folsom Prison and San Quentin records.

This left one crate (the one already paged through on the right below) which the woman explained was 'organ music'.  It was in a crate such as this as the (now closed, RIP) Thrift and Fish Co that I began my love affair with Walter Wanderley's music (also RIP) which I found 'Organ-ized' .  So I knew well the feeling of 'that bin does not interest me' but yet yields great scores.  So I dug through and decided to purchase an old album that looked interesting.

I brought my records to this old woman and showed her what I would like.  I probably towered over her by about 2' and her hair was so thin, she looked like she was 110 years old.  She smiled and after some thought said 'that will be..........30 cents'.  I told her straight away there was no way I was going to try and get these records for 10 cents each.  She looked at me puzzled, and perhaps offended.  I immediately continued by telling her that these records may not be rare or valuable but they were certainly worth at least a few dollars each...and that is the truth!  I told her I would give her $5 for all of them and her already confused expression became even more so.  Again, I worried I had offended the woman and I felt terribly, until she broke into extended thanks for 'making her day' and by showing her the true worth of her records.

The Burt Behrman album I bought is very strange.  It perpetrates itself as 'easy listening' but it is totally sparse, unaccompanied organ.  The mood it creates is mysterious and almost disturbing at times, very ambient.  But the sparse database entry on discogs.com offered little information.  I more closely examined the jacket and liner notes and immediately found that none other than Rudy Van Gelder had engineered it.  I could find no date anywhere on the vinyl itself or the jacket but I was able to extrapolate it from the catalog number and put it at 1957.  This means it was recorded at the original Van Gelder studio in Hackensack.  A close view of the run out groove showed the famous RVG inscription - meaning Rudy had not only mastered it, but done so specifically in mono.  A terribly rare, valuable record? Perhaps not.  But one well worthy as a souvenir from a delightful encounter with an old woman who shared her stories, her garage and her records with me.  I miss her and hope she is well. 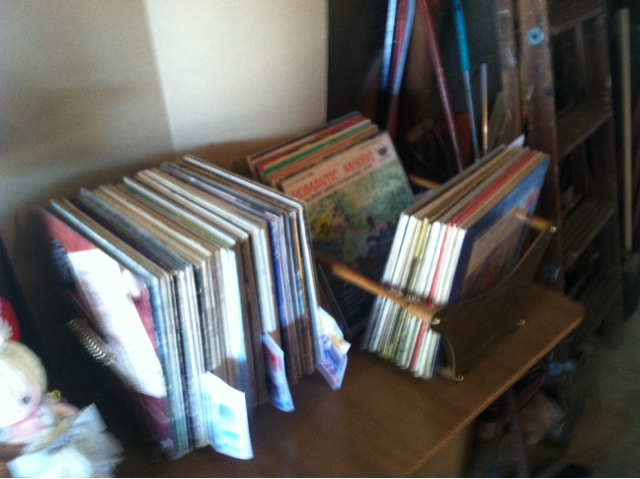