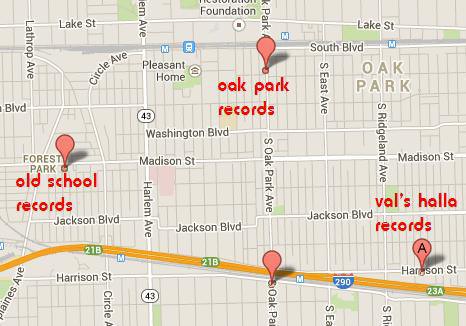 Going to take the Milwaukee west Metra line to Western Ave, then walk to California/Lake and jump on the Green Line.  Two stores in Oak Park and a third in Forest Park, at which point I can jump on the # Harlem bus, head back up to Grand and either hoof it back west home, or jump on the Metra at Montclair or Elmwood Park.  Time to gear up - and head out!

EDIT: Well, that was my original plan.  Had a few hiccups along the way and played it by ear, improvised a bit. 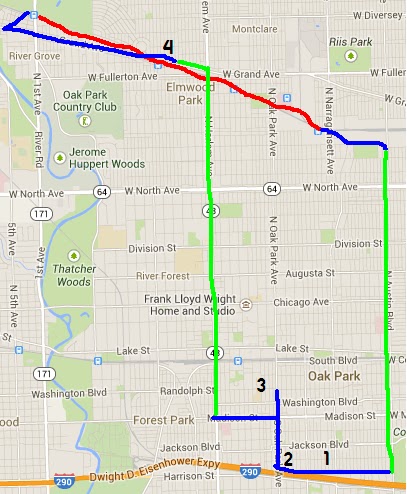 I started out on the Metra as planned (red line), got off at Galewood, then walked to Austin (blue line) and got on the Austin bus, headed south (green line).

It was about this time I realized that I left my weekend pass on the Metra.  I rarely buy them and this is the first month I have gone without my monthly pass in years, so I am all out of sorts.  I hope at least someone found it and made use of it during the rest of Sunday.

Got off the bus at Harrison and walked west (blue line).  I was headed for Val's Halla (#2) but saw a thrift store on the way.  I gambled that they would have records - I won that bet! (full post forthcoming).

At this point I was starting to get exhausted of the cold and realized if I continued onto Forest Park I couldn't possibly give the store (or myself, or my record bin at home) a fair shake.  I walked back south to Madison and literally stood at a cross roads.  It was about another 1/2 mile west to Old School Records, or I could get on the Harlem bus.  I checked the bus tracker - 2 minutes.  Forest Park (and Oak Park Records) will come on another (hopefully warmer) day.

I rode the Harlem bus just about to the end of the line (green line) then jumped off just before the end of the line to visit my friends at Knick Knack Paddy Wack.  They had been holding some 45s for me to review.  I dug through the box and came away with this gem.

After that I went across the street to shop at Super Low Foods for a bottle of wine and some grub then checked the status of the Metra.  I would have to pay to go the one stop - without my monthly I would sacrifice a punch on the 10-ride I am carrying.  Or I could gamble and stand in the vestibule and hope they didn't run up on me.  It was about 50 minutes to the next train - so I hoofed it home.

Came away with three records from the thrift store (The Brown Elephant) and one from Val's.  Full posts on each coming shortly.  Exhausting day.  It's time for jim-jams and that bottle of vino.