Return to the Record Dump aka Beverly Records 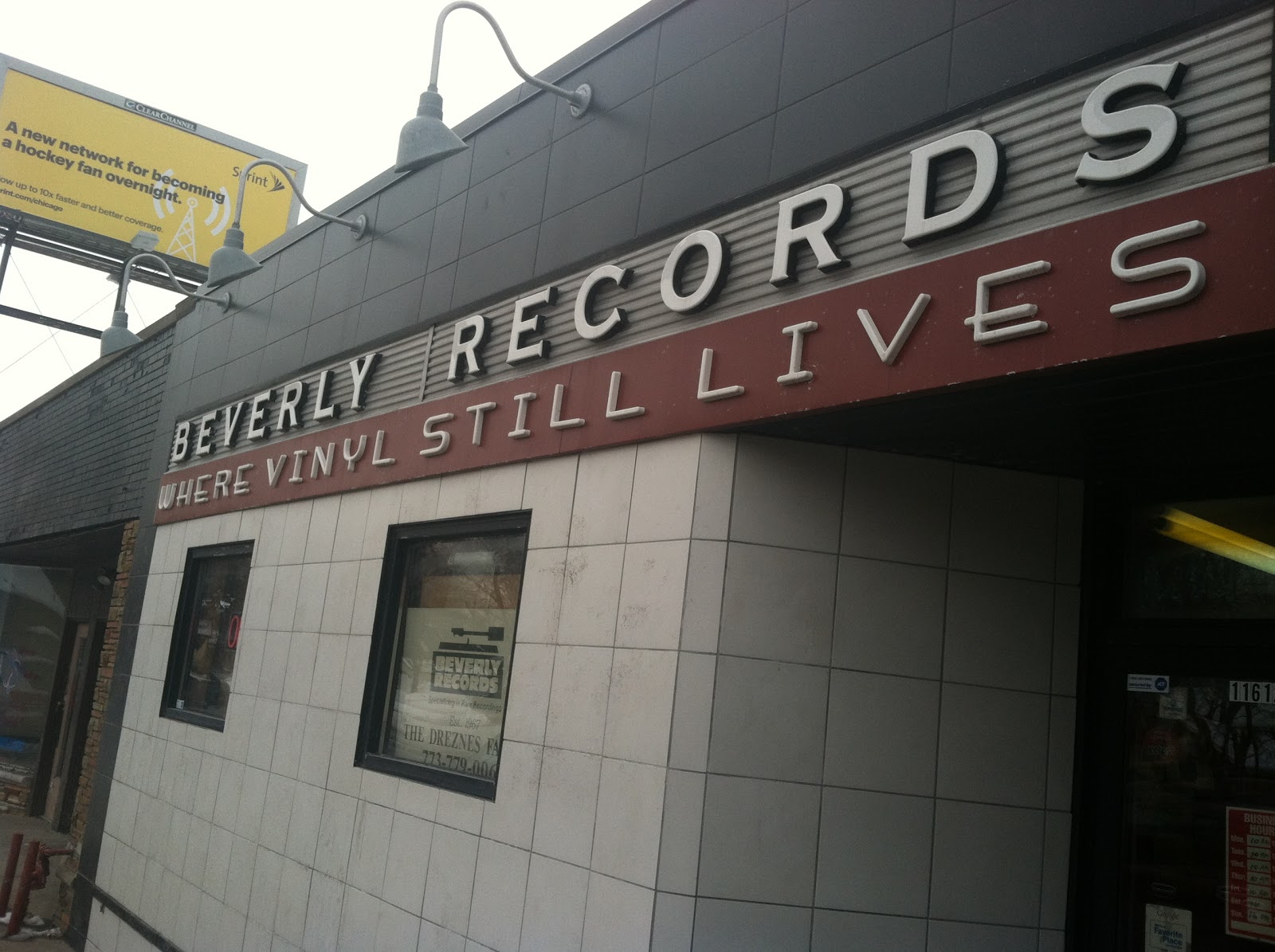 No better way to spend a Saturday than the 6 hour round trip from River Grove down to Beverly Hills.  I visited Beverly Records for the first time a couple months ago and I can honestly say that I did give them a fair shake the first time around - the place is a dump.  Having more and more records - in poor condition, disorganized/cramped to the point of creating claustrophobia (in persons not generally prone to such maladies), random pricing....yeah, it's that good.  Ever seen an episode of 'Hoarders'? You. Just.Can't. Look. Away.

But despite this I returned, for it is at times not the destination but the journey.  And it is indeed an adventure.  I made an unplanned stopover at St. Vincent thrift store just a couple miles north on the way where I came up on some excellent scores.  What would the dump have for me on this day?

My first order of business was a record I had held in my paws during my previous visit but elected not to purchase.  Part of the CTI All Stars series (the initial offering, actually), the California Concert features George Benson (I found it mistakenly in his bin) and other of Creed Taylor's soldiers of the era.   I had recently picked up the first of three 'Live at the Hollywood Bowl' albums (via mail order) and I was planning on completing the collection.  I moved to the 'Misc Jazz C' bin and immediately found all three - including the one I already had.

While in the 'George Benson' bin, I looked for another album on my want list - The Shape of Things to Come.  A continuation of my current CTI fascination, this is one of a handful of albums that uses this same cover template.  The last three Wes Montgomery albums (of which I already had two) as well as Jobim's 'Wave' also share it.  The did have a copy of 'Shape' - but there was no vinyl inside the jacket!  The whole area was a mess, there was a random stack of A-B jazz albums, largely more Benson and also Count Basie just laying across the bin, apparently because there was no longer room in the bins they belonged in. For shame.

I checked the 'Misc Jazz J' bin for 'Wave' - I did find one older Jobim album, but not the one for which I searched.  So I moved onto the area housing the Wes Montgomery albums, on the hunt for 'Down Here on the Ground' - the last of the three albums I previous mentioned which I did not already own.  I not only found it, I found a couple copies.  First the standard issue, than the gatefold, then another gatefold in EXCELLENT condition.  Waiting for the other shoe to drop, I checked the inside.  Was the vinyl even there? How badly beat up was it? It was intact - its its original A&M plastic sleeve.  A keeper for certain!

I checked for any Azymuth records - they only had one, 'Telecommunication', which I already own.  Drat!  To conclude my jazz hunt for the day (before moving onto simpler pastures), I went to the Pat Metheny bin.  I recently picked up 'Still Life (Talking)' (via mail order) and was on the hunt for 'Letter from Home' to complete the so-called "Brazilian Trilogy" that includes those two albums plus the previous 'First Circle' which I picked up at Logan Hardware a while back.

After shaking my head at coming across multiple copies of 'Still Life' (which I had ordered via the internet after being frustrated at not finding it in any of my hunts), the last album in the bin was indeed a mint copy of 'Letter from Home'.  Success!

But like everything else in the store, they are roughly organized and physically laid out in a way that requires that you basically lie on the floor to dig through the 100 records or so in each bin.  Of course the quality is low - these are BEAT.  Worst of all possibly, they 'start' at $4.  I am far from a 'snob' and I am ok with beat up records as long as they play (somewhat).  But these things are beat to hell.  But in my case, I didn't care.

I have been messing around with wall hanging vinyl for a few years.  I got three big frames that will easily hold a 12" sleeve (even with the vinyl still inside) and are easy to open/close so you can swap 'em out when you get tired of looking at the same thing.  I had my Brasil '66 Pickwick reissues of 'Equinox' and 'Ye-Me-Le' recently but I've started on more permanent projects that contain a larger amount of creativity.

My Engelbert Humperdinck obsession is in full swing - the first piece I have created (with help) is a copy of the 'We Made It Happen' jukebox 45 (33 1/3rd 7" that contains 6 songs), along with the jukebox strip and custom matting made from the classic London/Parrot paper sleeves that outline upcoming and existing releases.  The frame is bigger than 12" so I used more than one and realigned the grid and its basically flawless.

Not too long ago I had a Discogs seller screw up and ship me a copy of 'Release Me' inside of 'A Man Without Love' jacket (the latter being the record that I wanted).  I got a refund and the 'Release Me' was actually the mono version so I swapped that out with the existing copy already in my bin and and framed the useless vinyl and jacket, separately.  Not much to do with the jacket (besides get some blue matting, already in progress).  And then we come to my diabolical plans for the 'Release Me' LP...

I initially just centered the 12" in the frame - looked pretty cool, but a lot of dead space.  I grabbed a tape measure and saw that if I got four 7" singles I could put them in the corners and while the vinyl would overlap, the labels would not.  So I started on my hunt for four unique versions of the 'Release Me' single.  Not an especially difficult task given the millions of copies that were pressed for that classic single.  I found two quickly on Discogs for minimal loot and already had two more lined up on eBay.  But what better place to get a couple relatively common 45s when you don't care about the condition (as they will never be played)? The record dump - that's where!

Eng' filled not one but two huge 18" long boxes.  The first revealed nothing new, only many copies of the two I already had in my possession back at home.  But the second gifted me two excellent specimens! First a London reissue, likely from the mid-late 70s with an alternate B-side ('There Goes My Everything', replacing 'Ten Guitars').  But it was the second - which was in the very back of the last bin - that really made me nearly sqeeeeeeee out loud.

At the plant where it was manufactured two labels had been placed on it, one overlapping the other. Score! After that I sorted through to grab two of the best condition Parrot paper sleeves I could find.  All were beat up - it took some time in a heavy encyclopedia once they got home to flatten them out.  Here is the frame laid out, but not yet put together (still have to secure some colorful matting): 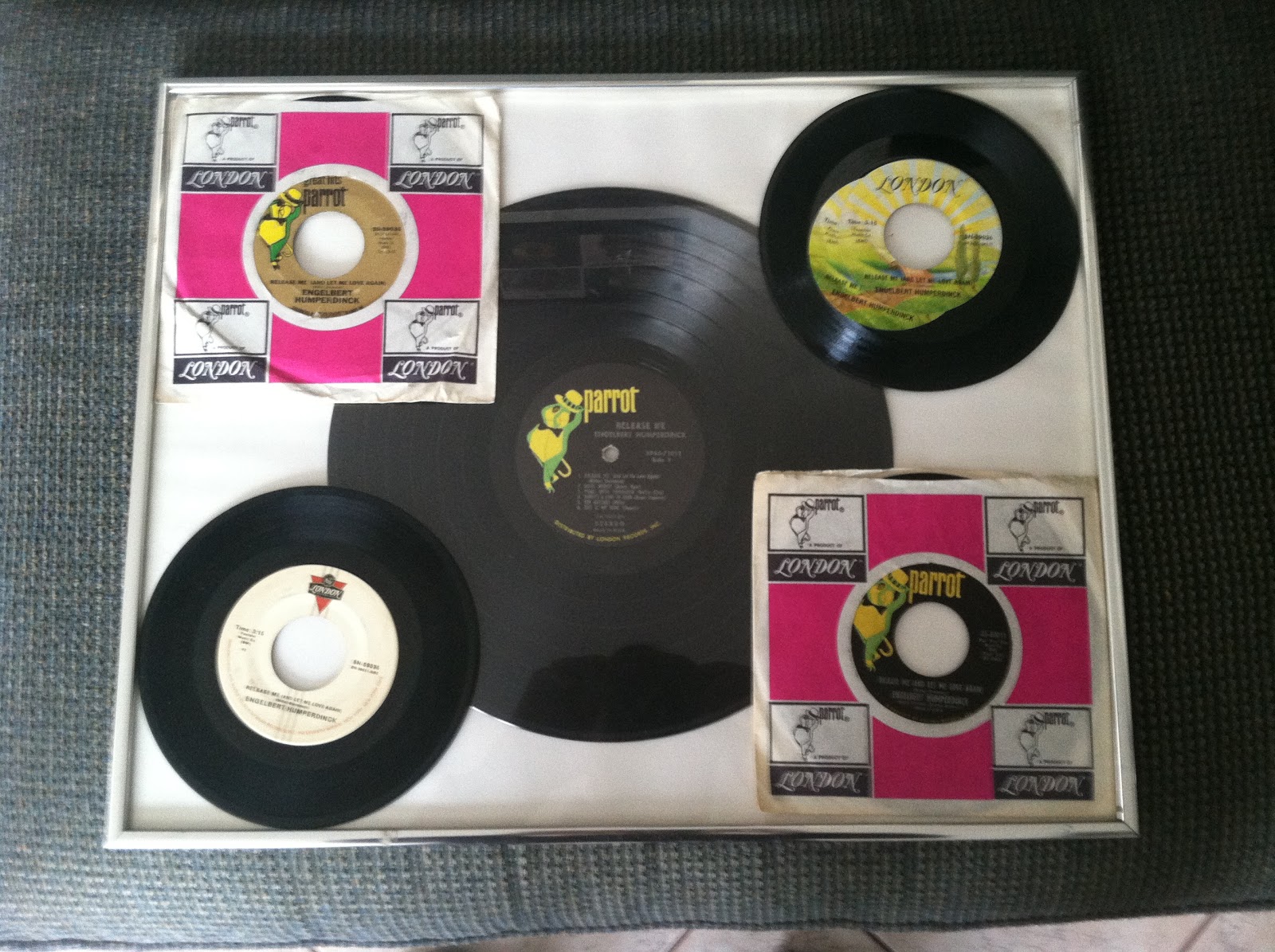 I was pretty satisfied with the day's finds but still could not understand why I couldn't find a section for Eng' in the 'male vocal' bins.  So I asked at the counter.  The old timer told me 'oh, those are in the back' and explained that there were simply too many LPs to put in the normal section.  My skin bristled with delight as I "excuse me"d back through the aisles to the rear of the shop.  And oh, what did I find?!

At this point I am at least temporarily satisfied with my Eng collection - I have the first 6 LPs plus 'After the Lovin'.  I have a fleeting interest in his remaining three Parrot LPs but the rest of the Epic stuff (of the 'mustache years' in the following decade) pretty much turn me off.  But I had to look.

The first thing I found (the two black bars on the left) definitely interested me.  I balked at what they would dare to try and charge me for a 5-LP set so I didn't even ask but as I am pretty sure these will sit here a while, one day I may return to the dump and pick them up.

I went through the rest of the LPs and found what I can only consider a 'holy grail'.  Pardon me - a holy FUCKING grail.  A SEALED COPY OF 'WE MADE IT HAPPEN'! This is the record that sparked by obsession.  Previously I had only known his famous single 'After the Lovin' of which admittedly, I was a fan.  It was given to me as a gift and I continue to play the hell out of it but to have a sealed copy - oh my goodness!  Convinced that it could get no better, I added it to my stack of four other 12 & 7 inch records and returned to the counter.  Where in fact, I was told that it was a $20/5 LP sale.  How they can do a blanket price on everything in the store is typical of their disorganization but no matter.  I had in fact seen something else in the rear of the store that interested me.  It wouldn't be until I got home that I really realized how interesting an item it really was. 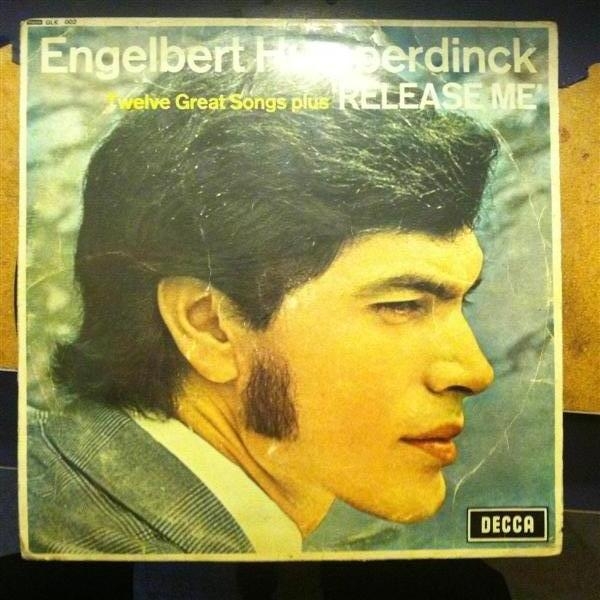 So I went back to the Engelbert section and grabbed this gem.  I had come across it before, but somehow this one was different.  I knew it was a compilation of early Eng tracks, despite the reference in the title and the (zoomed in) cover photo, this is not a variant of his debut.  I also noticed that it was labeled Decca - not Parrot - so I was sure it was a European release.  When I looked more closely I saw that I was right - it was from Greece! The versions of this compilation already listed on Discogs have a slightly different track selection - this Greek version was all new and I added it to the database.  However, it is one of the worst sounding records I have ever heard, and I don't mean the record is dirty.  It just sounds tinny and horrible, I don't know if this was mastered differently or what.  The vinyl is definitely not in great shape but my actual copies of the albums these songs were taken from are of similar age/wear and sound warm and wonderful.  This sounds like it should be in a horror movie.

The clerk acted like he was doing me a favor by only charging me $5 for the sealed vinyl (even though there is no signage anywhere in sight explaining that it should be more) and then pointed out that the 'Release Me' comp should have been $10 (it was pencil written on the back of the jacket - along with some other scribbles which I am confident were NOT put on by this store.  They looked ancient. 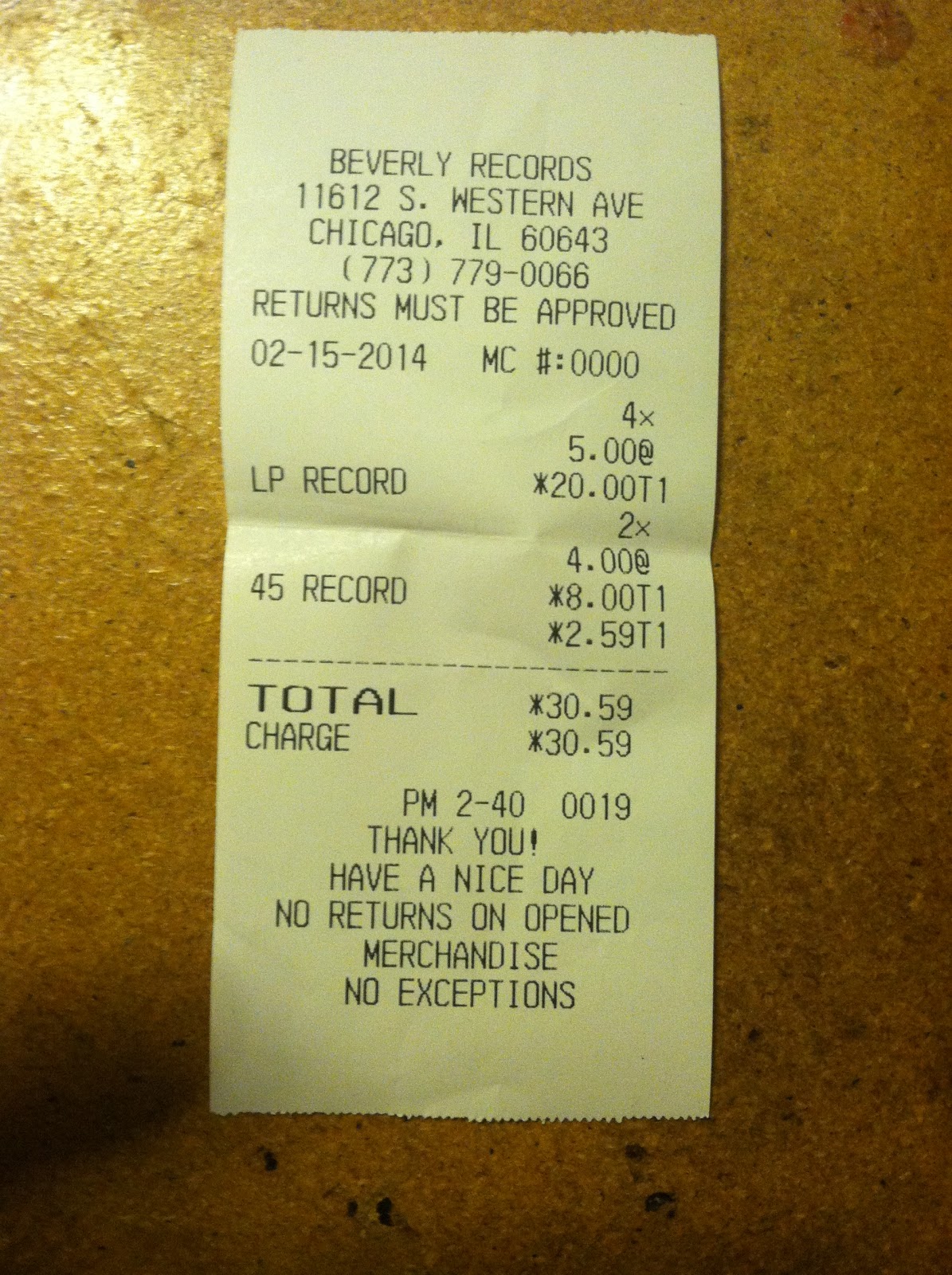 All in all, a wonderful afternoon and one of those things that you have to laugh at its just so messed up.  I came away with what I needed though I paid a bit of a premium for it.  Oh well, there are worse habits I suppose. 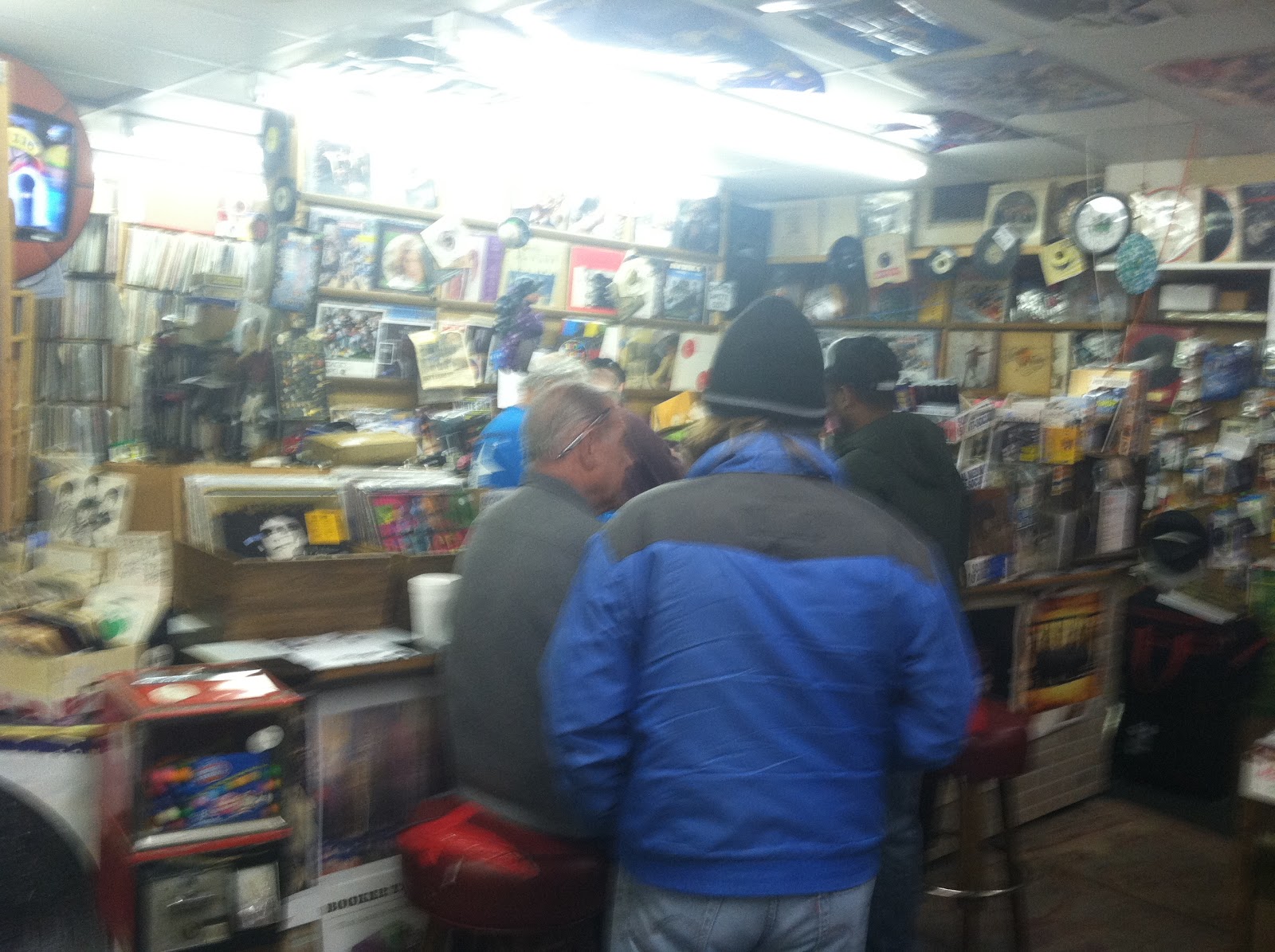