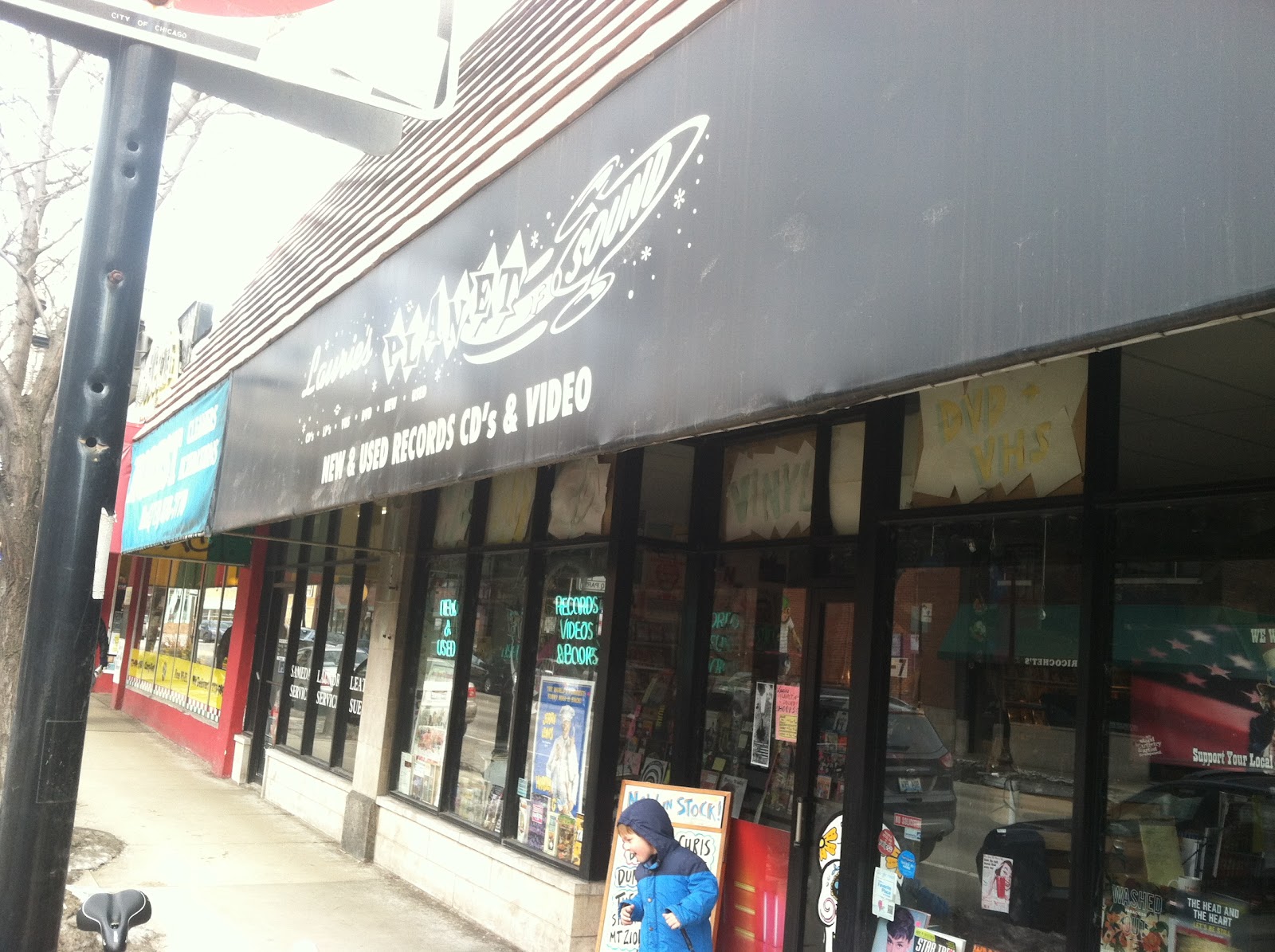 I had planned to visit Laurie's for a while but it's central North side location make it difficult to find a good route via public transportation.  On a 'mild' (32F) Saturday I decided I would take my bike on the Metra, and ride the ~12 mile round trip up and down Western via cycle.  As it usually is when buses and trains, you either get there early, or late.  And you won't catch me late when it comes to hunting for vinyl.

So I arrived at Laurie's a good half hour early.  I walked up and down Lincoln and checked out the other stores in the area.  Came across Merz Apothecary (which is expanding) which I had read about before a few times.  They are one of very few retailers that carry the Chicago Comb (bought mine online).  I saw Quake collectibles across the street from Laurie's and couldn't decided if they were a thrift store or something more specific.  They were closed of course, so I peered inside - well they aren't exactly a thrift store, but they did have records! Front and center, I could see the three-bin rack staring at me.  Laurie's opens at 11am, Quake not until noon. I had some time to kill.

Bored of walking, I camped out in front of Laurie's, slowly draining my thermos of the coffee that filled it.  About 10 minutes before open, the clerk arrived.  Any hopes that he would be opening a little early were dashed to pieces when he walked his bike inside and locked the door behind him.  The door opened again a short time later - again my hopes peaked - but he locked up again behind him and walked away.

He returned a short time later and having decided he would wait until 11am on the dot, secured the entry as he passed.  Never in these passings did he acknowledge me at all - I figure if he doesn't say hello, he ought to tell me to get the hell out of there for soliciting in front of his shop.

Luckily for me I did find something I want.  I became an instant Walter Wanderley fan after my find at Thrift and Fish Co.  not too long ago and this record easily eclipses that one.  Very pleased - listened to it a few times already and despite a small tear in the gatefold, the vinyl is in prime shape, very clean.  'Organ-ized' sounds artificial in comparison, 'Cheganca' has more soul, more swing....its just excellent. Best new artist discovery in a while.

There was some interesting jazz on, early 50s sound, bordering on big band at times.  But it had swing and wasn't bad - until some high pitched, chipmunk like voices interrupted! I figured this was a good time to break the ice with the clerk and I joked that I was digging the tunes until that voice kicked in! He responded dryly 'It's Raymond Scott.  It's a jazz record'.  It wasn't until now (that I remembered his name, finally) and dug through to see that this is the guy that scored loads of cartoons decades ago.  That might have been a good opportunity for the clerk to break the ice with me, and educate me on the topic.  I didn't go record shopping to get a hug from the clerk or start a passionate bromance but a hint of customer service would be appreciated.  I watched him practically leap out from behind the counter to push a stack of records back (they were leaning forward, the horror!) when a customer walked away.  Going to be a long day if that is amongst your job duties.

Perhaps more fun was the experience I had in Ravenswood Books, just next door to Quake.  When I left Laurie's, Quake was not yet open.  I was content to sit there and bide my time when Jim from the bookstore was opening up shop.  Unlike the experience I had waiting outside the record store across the street, Jim was warm and inviting - immediately asked if I was waiting for him or for Quake.  I did end up visiting the bookstore and hanging out with him for a while, we looked for some books I am collecting.  Couldn't find them, but he took my name and number and said he was sure they would come up.  So forgive this sideroad into 'Book Collecting in Chicago' but it is an interesting foil in service to the actual subject of this blog.

Small selection, ice cold employees, difficult (even by my standards, and I am willing to crawl) to access commons and teeny jazz selection make Laurie's a store I won't be soon revisiting, but I am sure glad I did. 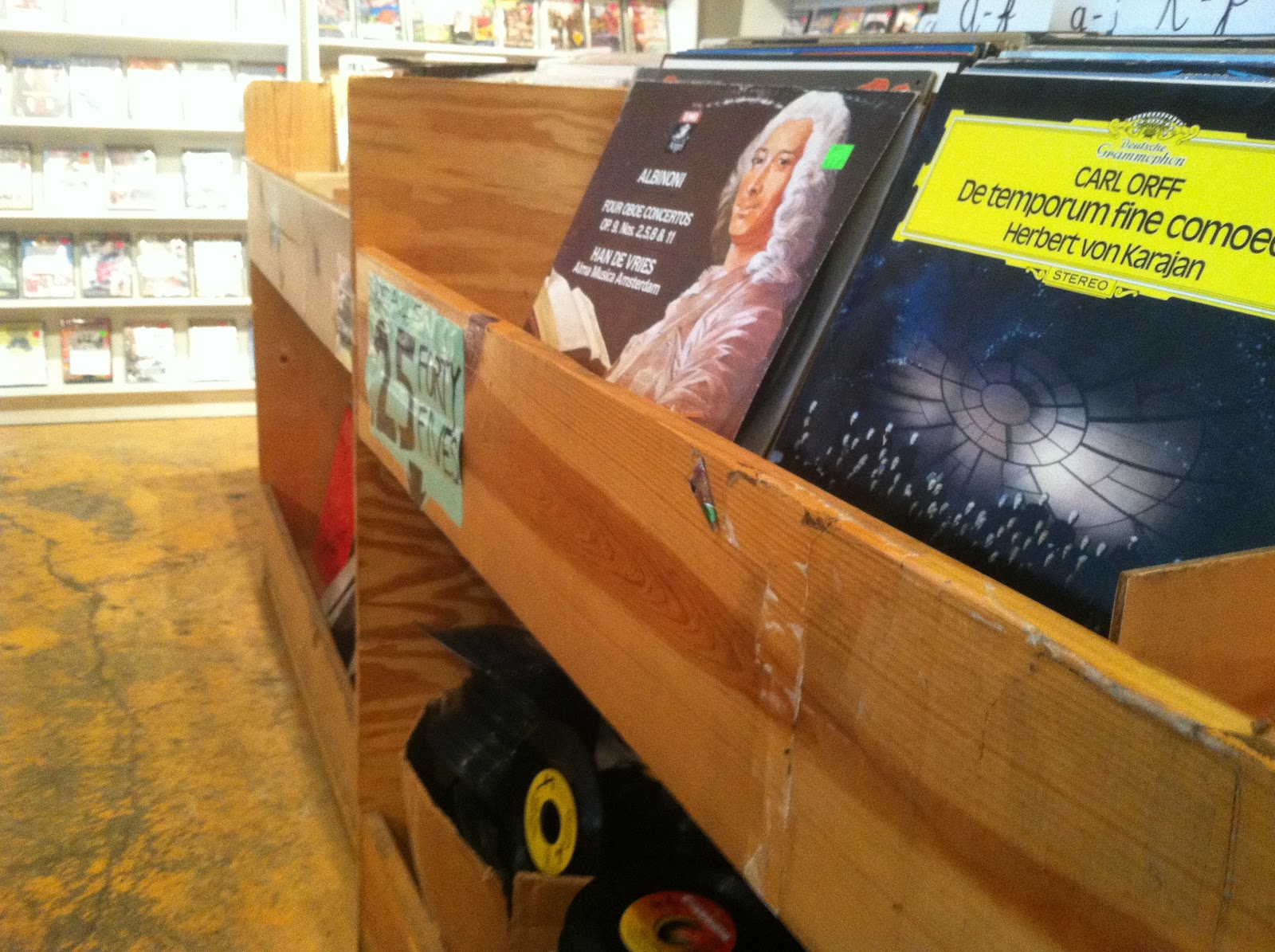 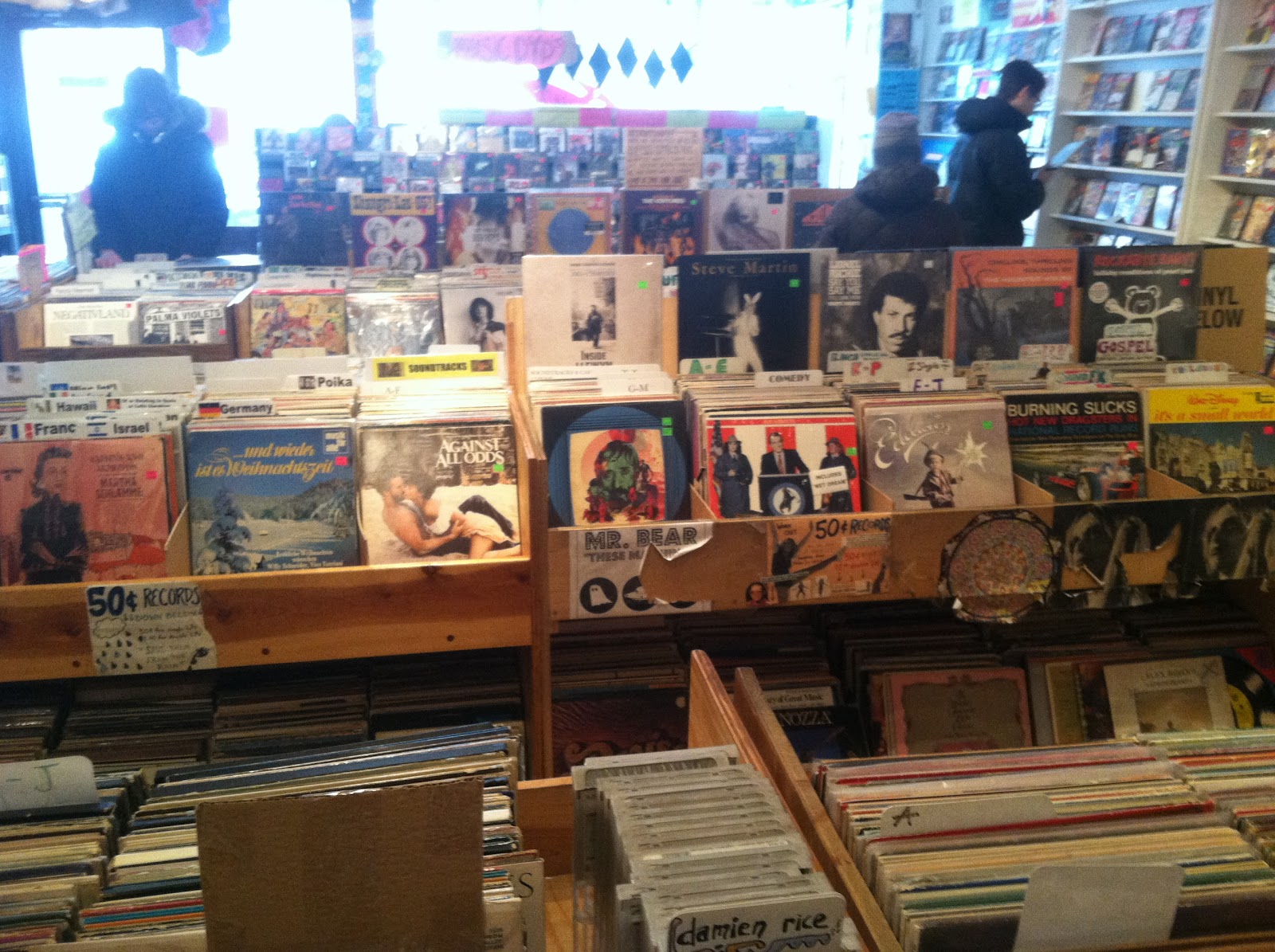