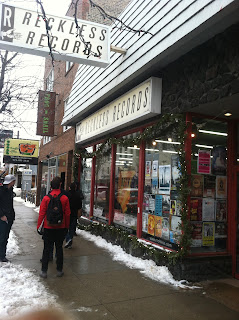 I received a $30 gift certificate (shown in previous post) for Christmas from my brother's girlfriend who knew I was a vinyl addict.  I took a Saturday afternoon jaunt up to Lakeview to spend it at the final of three Reckless locations. 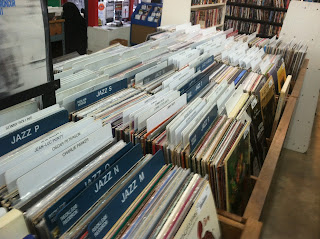 This location is on par with the Wicker Park location or slightly bigger.  There were a handful of people in there but not critically packed levels and no one was in the jazz section.  Having $30 to burn was a large budget for me, initially I thought about volume since generally my purchases are modestly priced.  I started logically in the 'A' section hoping to find another release or two from Azymuth - nada.  While in that same letter, I thought of all the Dorothy Ashby records I had passed up before due to cost - now is the time! Of course, I struck out there as well; nothing in stock.  Damn!

I did not make it far before I determined that I was not going to find anything costly enough - or even more than $10 - to spend this gift certificate quickly.  I started to become annoyed with myself, and this stupid blog and blamed the location.  I knew I could not get 'change' or spend it in more than one trip and I was half tempted to leave and go to Wicker Park or the Loop.  I came across an old copy of 'Giant Steps' for $15...I used to consider purchasing these all the time until I got the box set but part of me still wants an old (even if beat up) Atlantic copy.  I put it back then returned to it when pickings were growing slim - when I realized it was an 80s reissue.  No thanks.

I was pretty disappointed with the jazz section and came up with a handful of records that still left me far from my $30 deadline:

1) Wes Montgomery Greatest Hits. As far as I can tell, this is one of four Greatest Hits albums A&M put out with the same cover format.  I already have the Tijuana Brass and Baja Marimba band - the fourth is The Sandpipers.  I've held Wes's release in my hand many times but always put it back as it is a bit superfluous.

3 and 4) The last two Tijuana Brass albums I need to complete my limited discography (minus compilations and miscellaneous releases and anything after 1969) are 'Warm' and 'Ninth'.  Found these both for about $4 combined.

However this still put me way under my $30 limit and I wasn't too excited about some of these, even if I did need them.  I held 'Road Song' in my hand for a moment before I realized that it was 'A Day in the Life' I needed (already have 'Road Song', purchased at Wicker Park Reckless, ironically).  And this got me thinking about another release from Wes I had come across and passed up.... 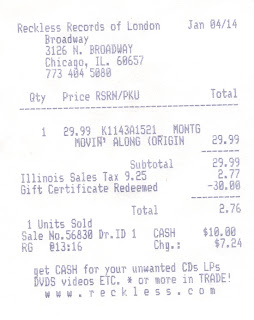 Original 1960 copy - Wes's first release 100% credited to him as band leader and not a side man or member of a group - 'Movin Along' At $30 I wouldn't even consider it normally (not THAT much of a Wes fan either) but I figured that spending free money in nickels and dimes on budget vinyl was silly - be frivolous! It is a great record too, interesting to listen to Wes material where the guitar isn't totally at the forefront of the arrangements.  A very different recording from a very different era, in comparison to the other release I already have (and mentioned above).  Victor Feldman's credit on the cover also caught my eye.  I knew he played the electric piano solo on 'Black Cow' and the vibraphone on 'Aja' but I did not know he played on every track of (one of my favorite) albums - albeit 17 years later!

So I paid the tax (minus one cent!) and moved on.  A cold, horrible day with mushy terrain underfoot I started moving back towards the red line when I realized that I was near another shop I had never before visited......