I visited Permanent Records on October 19th 2013.  The Metra Milwaukee West line takes me from my stop 1/2 mile from home to the Western Ave. stop which is just about another mile or so.  Permenent Records is my ideal store, just the right size and just the perfect equlibrium of interesting obscure stuff and standard 'commons' at bargain prices to dig through.

I found two records I had been looking for and great prices on both.

1) Hitmen - Rack 'em Up 7"  At the time, I did not have any of the Hitmen singles or their variations - this was the first, since I have attained all 4.  This was the black vinyl variant of their second release, this one on Quincy Shanks records.  I saw Hitmen live two or three times back in the late 90s and while I was familliar with their first release on Rocco from back then until mid 2013, I was never aware they had another release floating out there.  I found this in just minutes after I arrived as the 7"s are right near the front door - I was thrilled to say the least.
2) Weather Report - Heavy Weather.  Weather Report is not one of my favorite fusion groups but this album is immortal and even I know that.  Scored this for $2.99 like the 7" above, found it in the back bins mixed with 100s of other randomized releases from all genres. 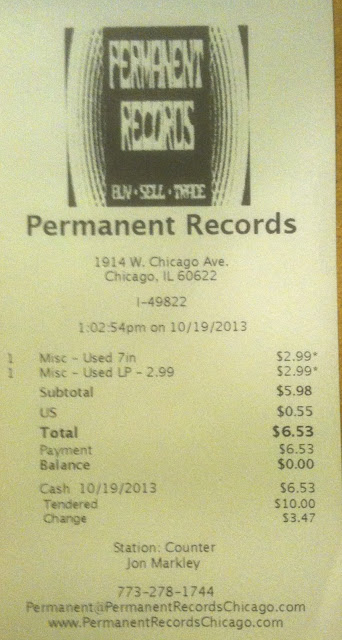