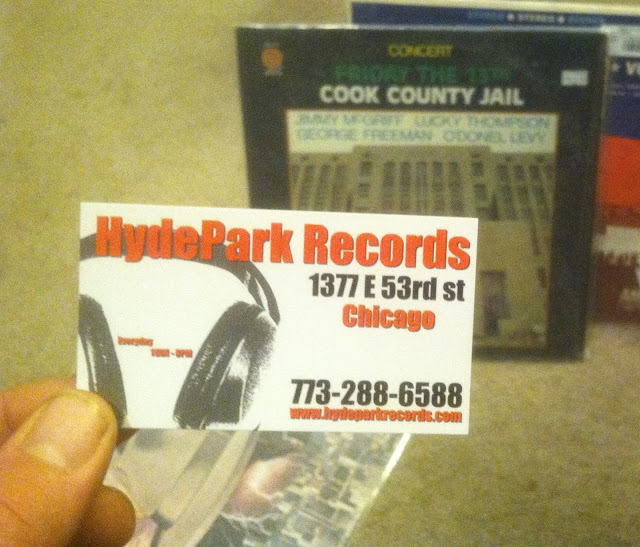 I first became acquainted with the Kenwood/Hyde Park area as many people have, via the infamous Leopold and Loeb case, now nearly 100 years old.  I took a walking tour as part of the Chicago Historic Museum and I have been returning to the area since, at times without any real reason.  I was surprised to find that there was a record store in my midst as I jaunted around the neighboorhood during my visits.  I rose early to head down south and see what I could find.

Many parallels can be drawn between this store and Dusty Groove: both specialize in jazz, soul and largely shun other genres.  However while Dusty Groove is far more narrow minded in that regard, Hyde Park Records shows far more lenancy.  They do stock some 'rock' records and have a huge trove of 99 cent mixed style records of varying qualities - Dusty Groove would never bother with such trifles.

I moved immediately to the jazz section as it is the flagship of the store.  I looked at a number of releases but decided against all of them for various reasons.  That being said if I had more money and space, I'd have bought them all:

1) John Coltrane - 'Giant Steps'.  I recently bought the reissue to replace my simple 70s "That's Jazz" copy but I still have a hankering for a real Atlantic release from the 60s or earlier.  The quality and price did not jive with me, especially considering I just threw down $50+ on a 180gram copy.
2) Dorothy Ashby - "Dorothy's Harp" - I became a Dorothy Ashby fan when I found out that Madlib had sampled her work for "Ashby Road".  I have a bunch of mp3s and the vinyl is regularly hard to come by at all or expensive as it is all OOP.  One day.............
3) Flora Purim and Airto Moreria - "Humble People" I am glad I did not buy this when I see copies on discogs.com for 4.99.....
4) Airto Moreria - "Identity" I come across this record seemingly ALL THE TIME and its driving me to madness.  I don't know that I'll love it but surely I love Airto's work....why does this record haunt me everywhere I go???

I initially saw the release I was destined to bring home but after an extended look I put it away.  Then a short time later I had the revelation that I MUST have that album...and of course someone was in that section.  Like an amphetamine addled maniac I tried to look elsewhere while regularly jerking my head in the direction of 'JAZZ MISC F' to see if I had my 'in' available.

Eventually I did and I ran back to grab the disc that sits before me now, hours later, comfortably at home.  While I am not familliar with any of the musicians that play on it, this 'wildcard' of a piece for my collection had a few characteristics that made it enticing:

Ironically this 'venue' (considered a 'label' on discogs.com) only has two other releases: a live album from B.B. King from the year previous and the Triton College Jazz Band who also played there in '71.  I went to Triton for 4 semesters to transfer credits in the early '00s and the campus is only about a mile from where I live now, and where I grew up.  THAT release has shot to the top of my want list.  Eyes are peeled....

'Friday the 13th - Cook County Jail' is actually an excellent record with some staggering guitar work that jumps out - interesting since Jimmy McGriff gets top billing and he is known for his work on the Hammond.  Soul-Jazz is not a genre I am fully familiar with and I do not believe I have any other releases in my collection that would fall into this style but it surely appeals to me.

The best kind of find is the one you were not looking for but end up so pleased with.  I spent about 25 minutes looking through the lower bins full of 99 cent releases and was very tempted to grab a MINT copy of Wham! 'Make It Big' with zero ironic intent (that is some great pop music) but decided mp3s will suffice.  All of that aside, the best new music I discovered may be the one I did not take home.  5 minutes into my diggin', I had to approach the counter and ask what they were pumping through the speakers.  It was the catchiest jazz I've heard in a minute: it had an ethnic flavor, funk and fusion elements and it was addictive.  They showed me the CD - they did not have it on vinyl (I looked) - so I downloaded it when I got home.  It has been on serious rotation since and shows no signs of slowing down. 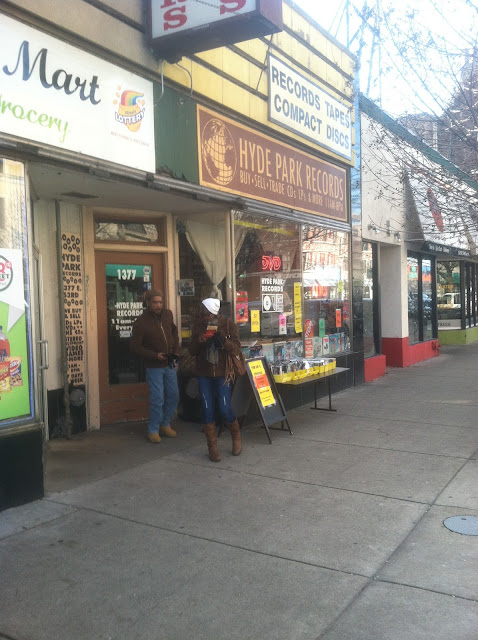